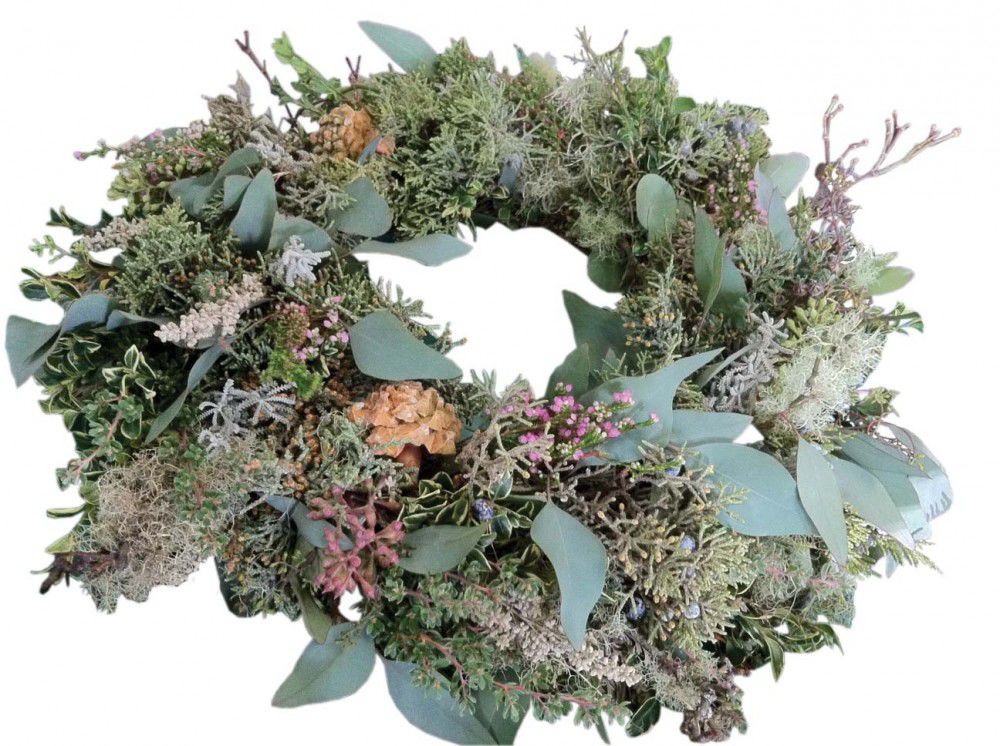 <p>Proving that all that's needed is outside waiting to come in, a great selection of seasonal greens is ready to become part of a seasonal wreath.</p>

<p>Proving that all that's needed is outside waiting to come in, a great selection of seasonal greens is ready to become part of a seasonal wreath.</p>

Things havent changed all that much. The holiday wreaths that deck our homes interiors and exteriors this time of year have a long and noble history. The word wreath stems from an Old English word meaning, something wound or coiled around, according to the Oxford English Dictionary. Dating back to the ancient Greco-Roman era (around 500 B.C.), ancient nobles, society hobnobbers and Olympic Games victors, to name a few, wore wreaths as decorative crowns and headdresses made up of the same materials in use today: fresh tree leaves, twigs and small fruits and flowers. Wreaths have been used throughout history as symbols of high status, moral virtue and victory as well as celebration, fertility, and life and resurrection

Back to Tolovana Hall: Group advisor Martin suggested the wreath makers go outdoors and gather interesting natural bounty; its what she does all year long. She brought in a selection of juniper, bay leaf, sage, rosemary, lavender, greens, nuts, berries, and closed pine cones that will open as they dry  and thats just for starters. One garden club member wanted a pretty wreath; another commented that she loved hers because it was finished; and yet another, after numerous false starts, decided that just buying a wreath was starting to make a lot of sense and headed off to enjoy another piece of cake.

Wreaths, whether homemade or purchased, are often the first sign that Christmas is in the air. Beginning to appear shortly after Thanksgiving, they set the tone for the holiday season  unless, of course, you happen into a retail shop, where Christmas seems to be in the air sometime around the Fourth of July. When a wreath decorates a house, it makes the house a home, a welcoming place. And there is often tradition attached to the wreath.

For Dave and Sue Corkill, of Astoria, a holiday wreath is a family connection that helps a good cause. Their daughter has presented them with a holiday wreath for more years than Sue can remember. Its a tradition that each year supports a local youth fundraising effort. When our granddaughter was in preschool we had wreaths that came from preschool fundraisers. How time flies. That same granddaughter is in high school, and the wreaths come from her high school dance team, Sue said. Its a nice history. Each year, up it goes, right by our front door where it stays until February.

At Ed and Betty Rippets house in Gearhart, one of the first signs that the holidays have arrived is the wreath that hangs on their front door. And one of the signals that spring is on the horizon also centers on the Rippets wreath. Though we havent seen them for a couple of years, for many years, sometime in early March, a little red finch would make her nest in our wreath toward the back side of it, up against the wall, Betty said. A month or six weeks later we would have about four baby finches. When we opened the door, the mother bird would fly away, but always returned a short time later, and none of the nesters seemed to really mind the door opening and closing. The birds would stay until they were old enough to fly, and then one day they would be gone. We would never dream of taking the wreath down. By the time the birds had flown away, it was one dried out wreath, but we just loved it.

Youve just got to give a big hand to wreaths: They provide us with history, hands-on efforts and continuing joyous traditions. Lucky for us, it all started when some person of note a long time ago probably took off his headdress, hung it on the wall, and the rest is, well, history.