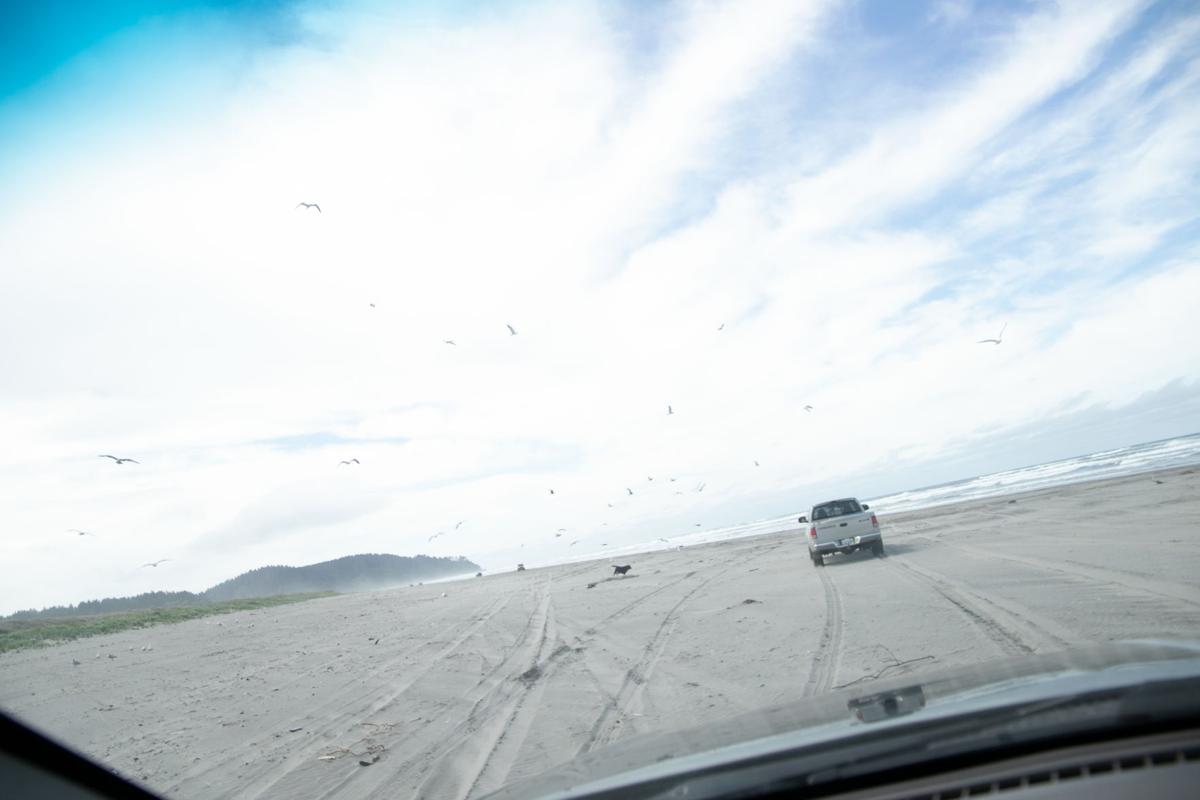 Tim Teall hunts for kelp washed up on the beach with his dog Holoholo on Monday, May 18. With the beaches closed, Teall wasn’t able to collect kelp for his homemade plant food business. 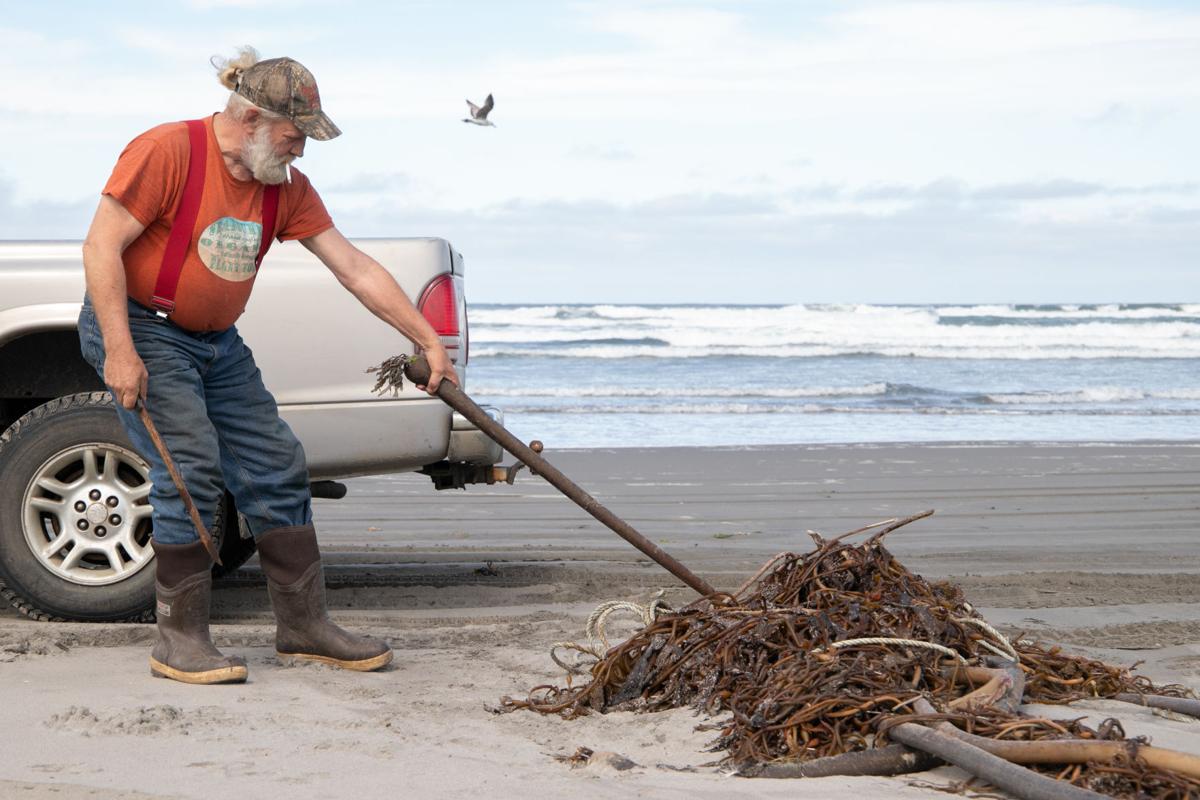 Tim Teall, 63, pulls a single bull kelp out of a clump Monday, May 18. For more than a month, beach approach closures prevented Teall from foraging for the kelp. He was disappointed more wasn’t washed up on the beach his first day back. 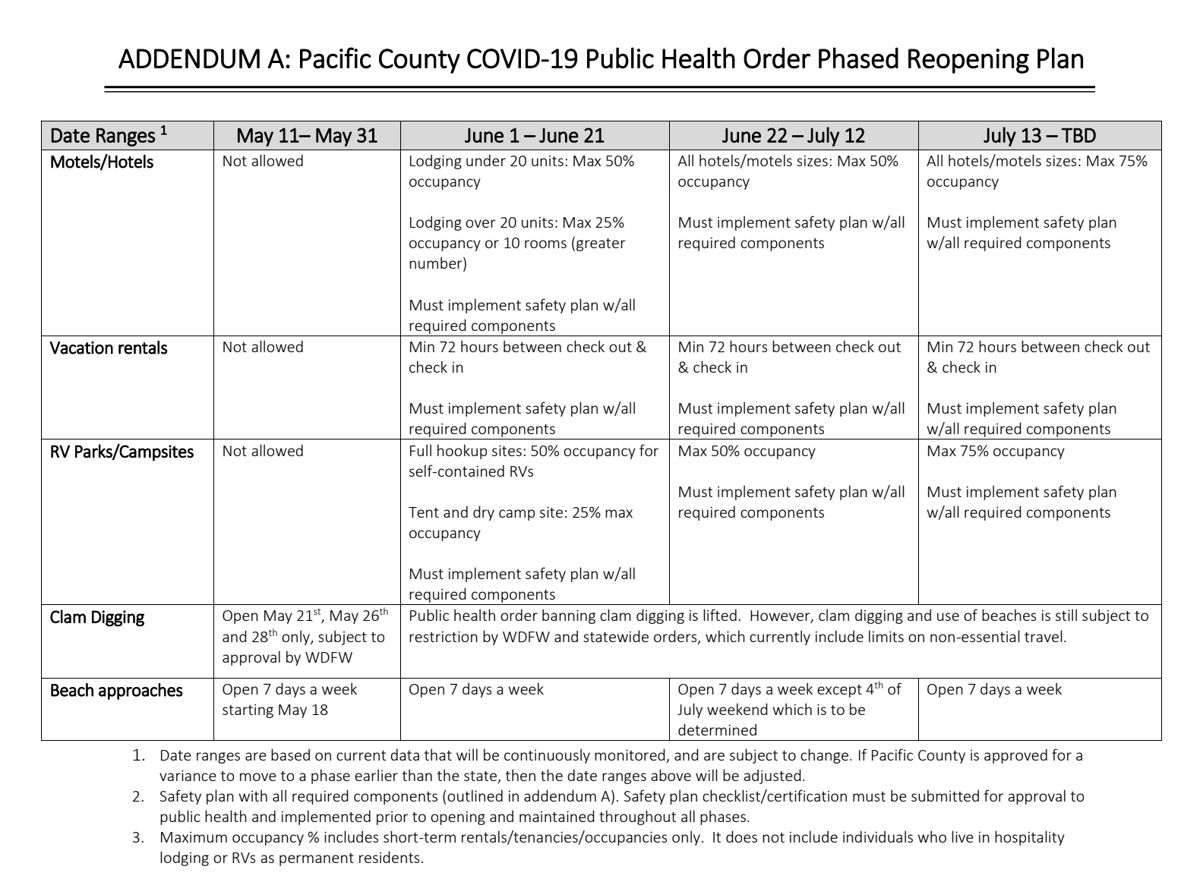 The reopening of the beach approaches was one part step in Pacific County’s measured restart plan, which was released Monday. The plan details how the public health orders issued by the county will be lifted in coming weeks. 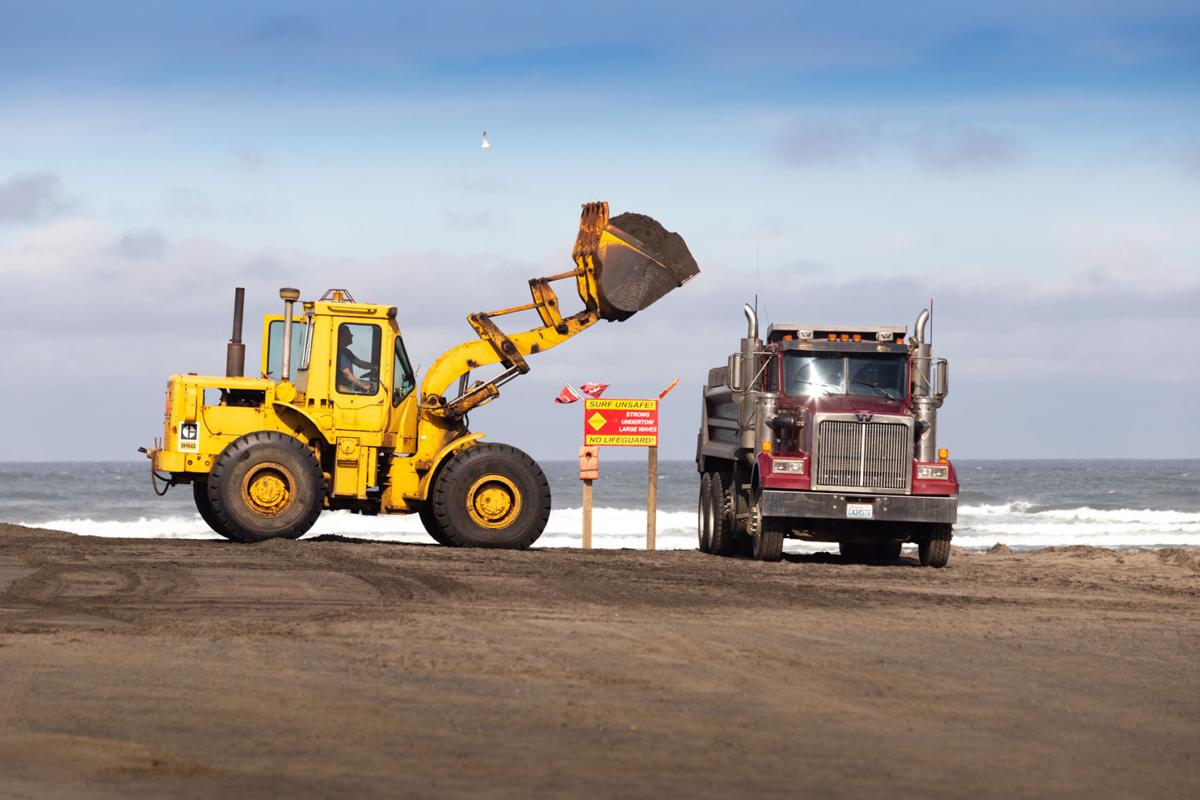 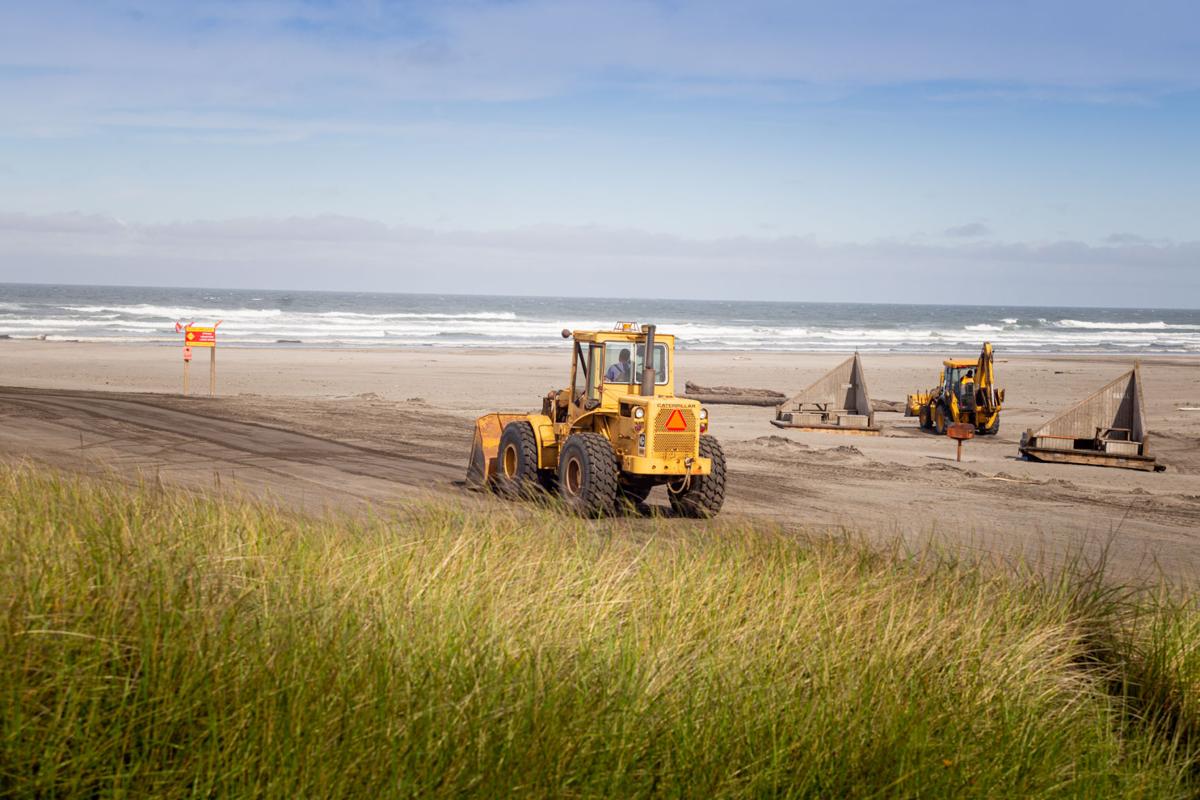 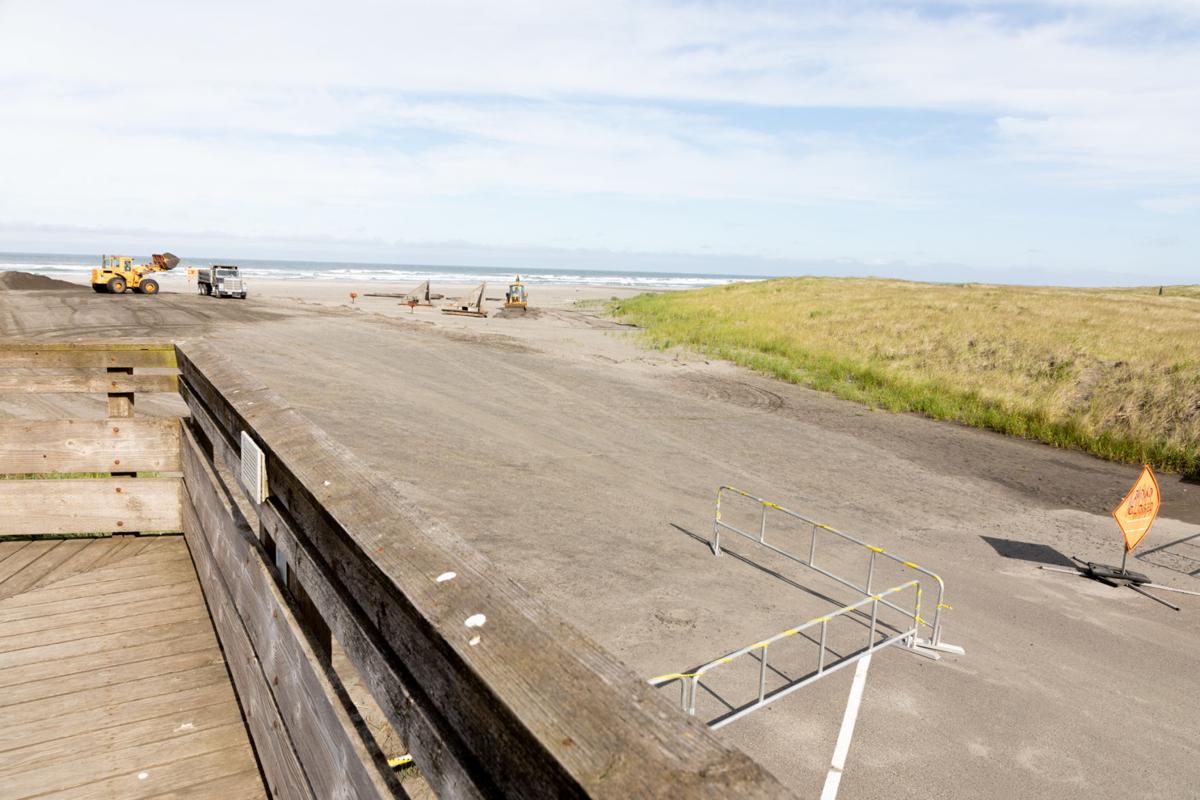 Tim Teall hunts for kelp washed up on the beach with his dog Holoholo on Monday, May 18. With the beaches closed, Teall wasn’t able to collect kelp for his homemade plant food business.

Tim Teall, 63, pulls a single bull kelp out of a clump Monday, May 18. For more than a month, beach approach closures prevented Teall from foraging for the kelp. He was disappointed more wasn’t washed up on the beach his first day back.

The reopening of the beach approaches was one part step in Pacific County’s measured restart plan, which was released Monday. The plan details how the public health orders issued by the county will be lifted in coming weeks.

PACIFIC COUNTY — For the first time in about two months, 63-year-old Tim Teall was back out on the beach chopping bull kelp with a rusty machete.

Pacific County removed its beach approach barricades Monday, May 18, as part of its gradual reopening of county recreation. It also released information about how the hotel and lodging industry will reopen in coming weeks. The Pacific County Board of Commissioners, local mayors and Sheriff Robin Souvenir approved the restart plan on Friday, May 15, during a Pacific County Emergency Management Agency Council meeting.

For Teall, the reopening was a chance to forage for kelp, which is a key ingredient in his Seabourne Organic Plant Food. When the plant food is brewed with fresh kelp it comes out a honey color. It is more marketable that way, Teall said. People don’t like it as much when it gets dark.

“Even though it’s like cheese, it’s just getting better,” Teall said.

Teall is a fisherman, but he’s been tinkering with his plant food recipe for more than 12 years. He viewed the beach approach reopening with excitement, because it meant he could gather fresh kelp again. He didn’t find much on Monday, which was a little bit of a let down, he said.

While reopening was beneficial to him, Teall said he knew it was a risky move for the community.

“I’m not afraid of covid-19, I’m afraid of people’s reactions,” Teall said. “For the community, it’s not good to open the beach, because I think people are going to swarm down here. And if they don’t, I’m glad I was wrong.”

On Thursday, May 14, Pacific County’s Emergency Operations Center released a survey asking how covid-19 changed daily life for people in the county. The survey asked about how and what the county should reopen. More than 1,500 people have responded, with a majority saying the beach approaches should remain closed, or reopen slowly, said Katie Lindstrom, director of Pacific County Public Health and Human Services Department.

Gov. Jay Inslee made his “Stay Home, Stay Healthy” order on March 23, about a week after he closed schools, many service industry businesses and banned restaurants from allowing in-person dining. Inslee did not order hospitality lodging, such as hotels and RV Parks, closed as part of his order. Therefore the county does not have to get permission from the state to begin restarting the hospitality industry.

Washington State Department of Transportation maintains a network of about 100 permanent traffic recorders across the state that count the number of cars traveling on state roads. There are two permanent traffic recorders in Pacific County. One is near the bottom of the county at the intersection of U.S. Highway 101 and state Route 401, just north of the Astoria-Megler Bridge. The second is near Nemah, at the intersection of U.S. 101 and state Route 4.

This data is normally vetted before being released, but given the pandemic and the need for real-time traffic data, the WSDOT created a data dashboard with traffic counts from its permanent recorders, said Joe St. Charles, the travel data processing and analysis manager for WSDOT’s Transportation Data, GIS and Modeling Office.

On Friday, March 21, a few days before Inslee’s stay home order, the traffic recorder near Nemah counted about 1,900 vehicles, an about 22.7% decrease in travelers compared to the average number of cars traveling through that intersection on a Friday in March 2019. The traffic recorder near the Columbia River bridge counted a little fewer than 6,000 vehicles, about a 17.7% decrease in travelers.

Traffic patterns stay about the same by day of week and month, with a slight increase each year as Washington’s population grows, St. Charles said. People have their normal behavior patterns and aside from some variation in recreational activity, people basically do what they do on an annual cycle, he said. The drop in traffic due to covid-19 is unprecedented, he said.

But in past weeks, traffic on weekends is on a slight upswing, according to the data. On Friday, May 9, the Nemah recorder counted 2,115 vehicles. While it was a 33.7% decrease from the previous year, it was the first time since the stay home order that more than 2,000 vehicles traveled through the area on a Friday. The Astoria Bridge recorder counted 5,828 vehicles, which was a 27.9 percent decrease from the previous year, but an increase of more than 1,500 cars from the previous week and the first time the count was more than 4,500 since Inslee’s stay home order.

Pacific County Board of Commissioners Chairman Frank Wolfe said closing the beach approaches did seem to reduce people traveling to the area at first, Wolfe said. But as the weather improves, he expected more visitors to come regardless of the closures.

“Other than building barricades on 101, I don’t know how we could keep people out if we wanted to, and quite honestly those people are our life’s blood here and we really don’t want to have them stay away,” Wolfe said.

The beaches give people a place to go and spread out, Wolfe said.

Still, the governor’s ban on non-essential travel will be in place until at least June 1, and even then it will be limited to areas near people’s places of residence, Lindstrom said. This reopening is meant more for locals than to encourage vacationing in the county.

The plan to change the public health order was made in collaboration with elected officials, public health officials and the Pacific County Emergency Operations Center. Pacific County Administrative Officer Kathy Spoor said the reopening meant it was even more important for people to observe social distancing and hygiene measures.

“If we’re going to be successful and we don’t have to back peddle on this we’re going to need people to be mindful, and stay away with each other as best we can,” Spoor said.

Recreational visitors should be able to return to the area during phase three of reopening, which is expected to be near the end of June. In the meantime, Spoor pointed to the message sent out by Visit Ocean Shores Facebook page, which asked visitors to “prepare for your visit with kindness.”

Phase one is scheduled to last from May 11 through May 31. During this time, beach approaches will reopen seven days a week as of May 18. The county wanted to allow clam digging on three weekdays, May 21, 26 and 28, with the approval of the Washington Department of Fish and Wildlife. The hope was by holding the digs on weekdays, it wouldn’t cause as many people to travel to the area.

However, Inslee’s office told Pacific County it would not approve a clam dig in May, said Jon Snyder, Inslee’s senior policy advisor on outdoor recreation and economic development.

“Razor clam digs bring thousands of people to travel to the coastal counties from all over the state and constitute a gathering under the ‘Stay Home, Stay Healthy’ order,” Snyder said. “This order has been extended to May 31, so razor clam digs and similar large gatherings are not allowed at this time.”

Washington State Department of Fish and Wildlife was coordinating with counties about reopening fishing in the outer coast Marine Areas 1 through 4, said Dan Chadwick, a captain with WDFW. There is no clear date on when that might happen, but the department is working toward restarting fishing.

Pacific County officials said in the emergency council meeting they would not object to saltwater fishing reopening.

Phase two is scheduled to begin on June 1 and end on June 21. Some hospitality businesses would be allowed to reopen during this time at a reduced capacity. Safety plans must be in place before businesses can reopen.

Reservations for vacation rentals must be for a minimum of 72 hours between check in and check out.

Phase three is scheduled to begin June 22 and last until July 12. Hotels and motels will move to 50% occupancy during this phase. Tent and dry campsites will be allowed to increase to 50% capacity. Rules for vacation rentals will stay the same.

Phase four is scheduled to begin July 13 and it isn’t decided when it will end. Occupancy levels will increase to 75% for hotels, motels, full hookup RV parks and campsites. Rules for vacation rentals will stay the same.

Pacific County’s phases align with the state’s restart phases. The state is expected to enter phase 2 of reopening on June 1, with people allowed to return to working in jobs such as, hair and nail salons, barbers, pet groomers, real estate, nannies and house cleaners. Restaurants are expected to be allowed to reopen at 50% capacity in phase 2 as well.

Hospitality businesses will be required to submit a safety plan prior to reopening. Examples of things businesses must have in place before reopening include: remote check-in; business-provided masks; barriers at points of check-in; employee health screening; restricted elevator use to one party at a time; public spaces closed, such as spas, hot tubs, gyms and lounges; communal restrooms cleaned and disinfected twice a day; a log of guests, with information kept on file for a minimum of four weeks; and other hygiene and operations requirements.

They ought to close the beaches until virus is over period.