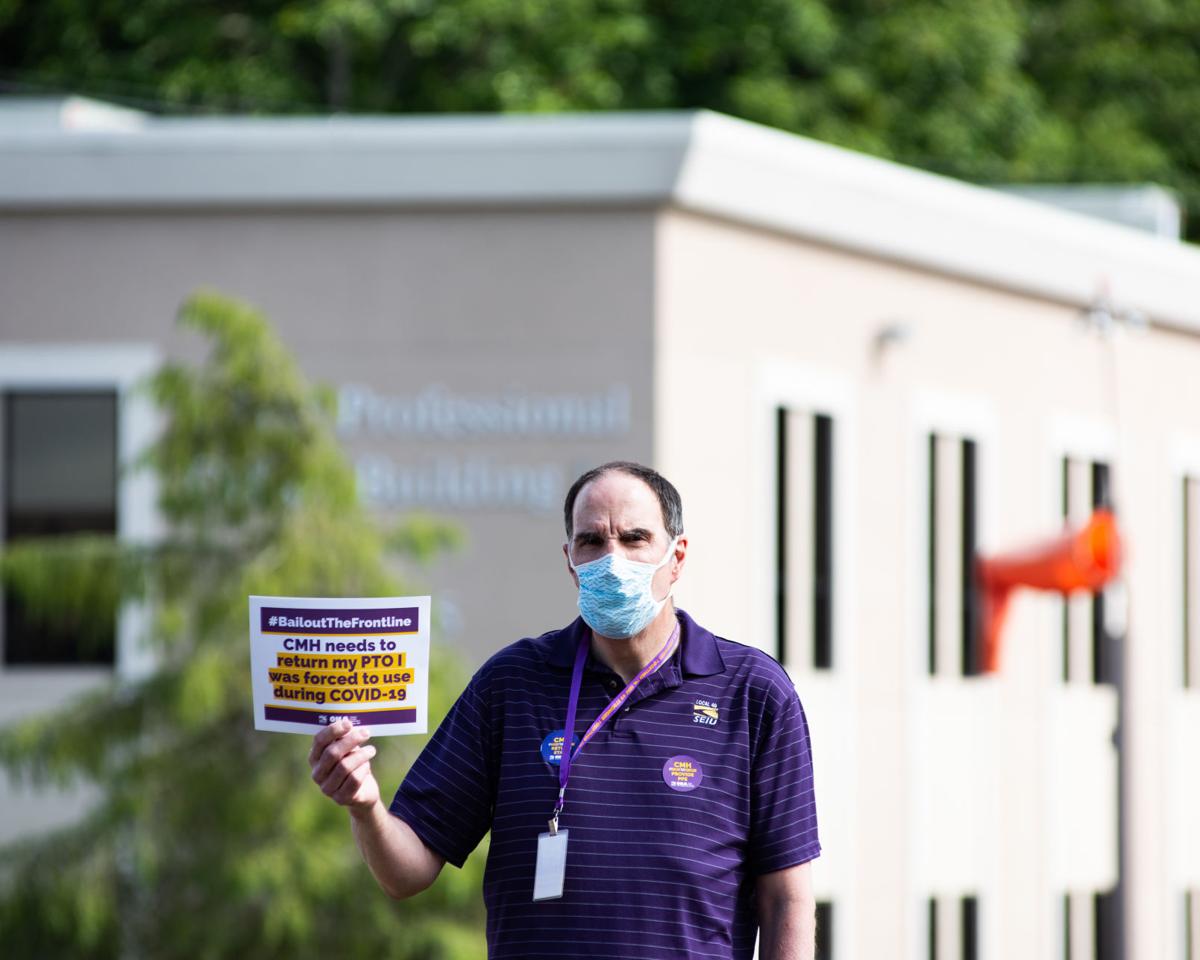 A worker rallies outside Columbia Memorial Hospital in Astoria on June 24. 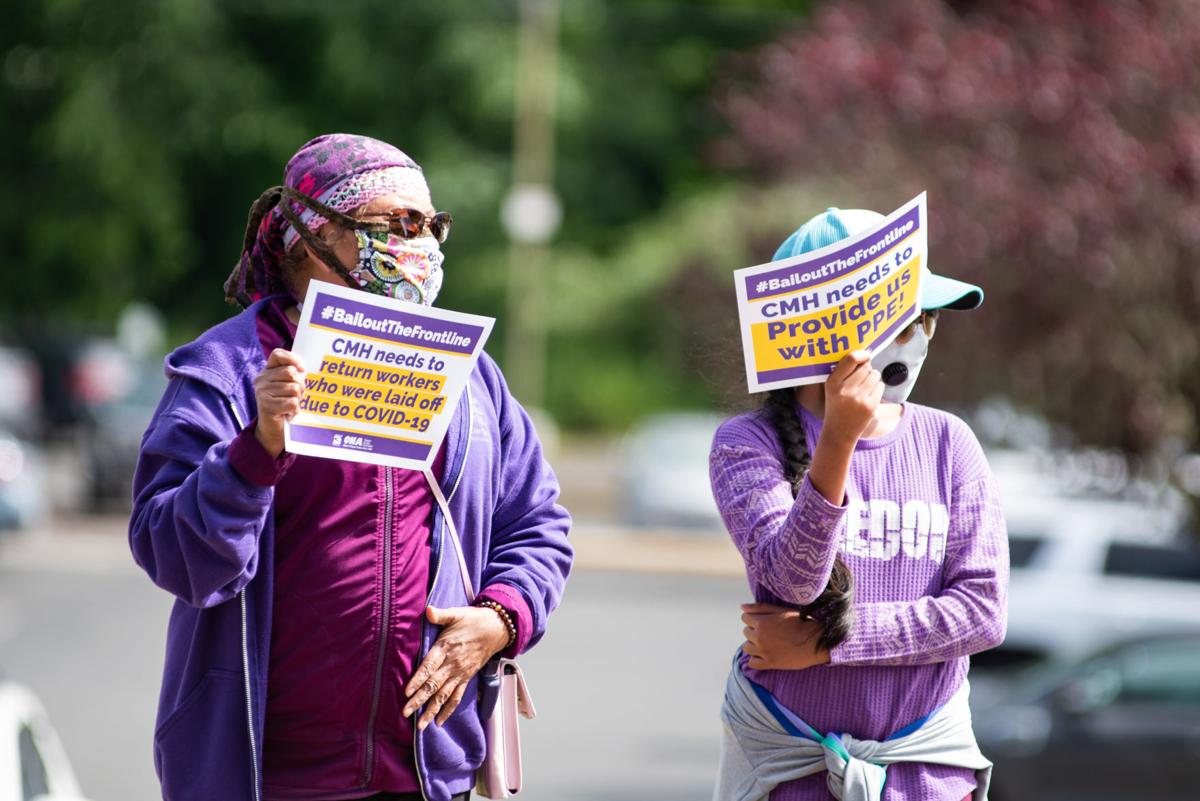 Several workers and residents rallied outside of Columbia Memorial Hospital to demand that federal relief be used to help front-line workers.

A worker rallies outside Columbia Memorial Hospital in Astoria on June 24.

Several workers and residents rallied outside of Columbia Memorial Hospital to demand that federal relief be used to help front-line workers.

EDITOR’S NOTE: Next to Ocean Beach Hospital and Clinic in Ilwaco, Columbia Memorial Hospital in Astoria is the primary healthcare choice for south Pacific County residents, so we are running this story to keep local CMH patients apprised of ongoing news.

ASTORIA — Employees at Columbia Memorial Hospital rallied on Exchange Street in Astoria on June 24, calling on the hospital’s administration to use nearly $8.4 million in federal relief to provide more support and bring back co-workers laid off amid the coronavirus pandemic.

The hospital in March announced temporary layoffs of around 90 workers as Gov. Kate Brown ordered the cancellation of elective procedures across Oregon to conserve protective equipment and capacity. The hospital administration has noted up to a 40% drop in revenue, resulting in the layoffs, mandatory leave for managers and a restriction on all purchases not affecting patient care.

The majority of layoffs were health care workers covered by the Service Employees International Union. They were offered three weeks of health insurance, as outlined in their collective bargaining agreements, but the coverage has since run out.

Lonn Martin, a housekeeper in the hospital’s surgery department and a chief steward for the union, said employees are worried those laid off without financial support will seek work elsewhere, leaving the hospital with fewer workers in reserve if a surge of coronavirus cases hits the area.

The $8.4 million Columbia Memorial received comes from the federal Provider Relief Fund meant to offset financial losses. Martin and other employees say the money should be used to support employees rather than backstopping the losses of the hospital. Employees argue the hospital posted profit margins of more than 11% before the pandemic and is sitting on significant cash reserves to build a new hospital.

“It’s just unconscionable to us that something cannot be done going forward when they’re able to,” Martin said. “They’re capable of doing it, and they’re just not doing it.”

Columbia Memorial administrators have repeatedly declined requests for interviews. In a statement on June 24, the hospital said many of the layoffs have been staffers choosing to take leave for personal reasons. Of the 54 members of the SEIU who were involuntarily laid off, the hospital said, 18 have been called back, while those still laid off do not directly impact patient care.

“We will bring employees back as the workload and volumes justify the increase in employees,” the administration said in the statement. “We will give priority to those positions that impact patient care.”

Also at the June 24 rally were members of the Oregon Nurses Association. The nurses union has pushed the hospital to help cover some of their paid time off exhausted during the pandemic and threatened to file complaints with the state over unsafe working conditions.

“If you look at what other hospitals are doing, they’ve went back to more, what we’d call, ‘basic scientific-backed procedures,’ where it is either one mask, one patient, one use, or you’re able to swap out masks as needed,” said Kevin Mealy, a spokesman for the nurses union. “We haven’t seen that at Columbia Memorial yet. It’s still, ‘wear one surgical mask your entire shift,’ and that’s a challenge for 12 hours when we know that’s not what the science indicates.”

The hospital’s administration said the federal relief money is being used to offset losses as well as operate the hospital, which can cost $350,000 a day. They’ve argued that in addition to the temporary health coverage, free crisis counseling and food supply baskets, the hospital has offered a caregiver assistance fund, encouraging employees to apply for support but only receiving 12 applications as of Wednesday.

“CMH would be remiss in assuming that the covid-19 pandemic is over,” the administration said. “It is in the best interest of the community to be as effective and efficient as possible with any hospital funds.”