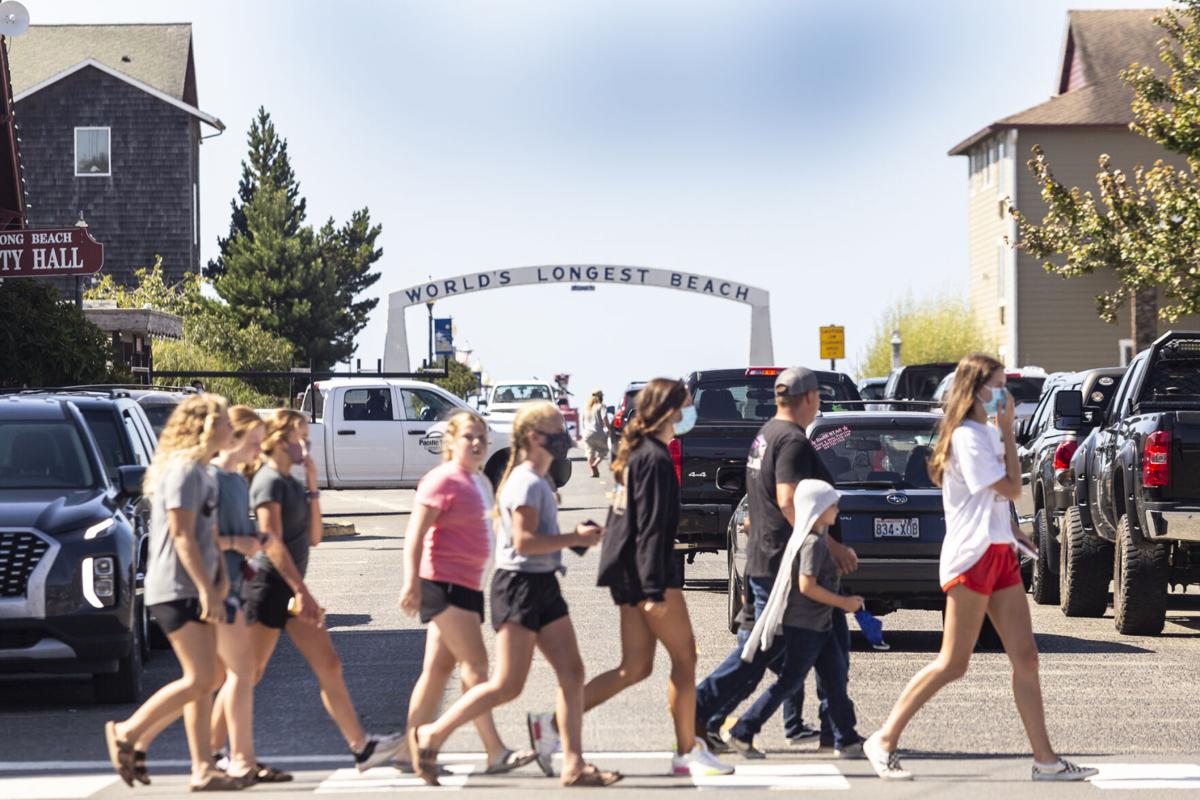 Late-summer crowds including car and foot traffic filled downtown Long Beach on Saturday, Aug. 29. Compliance with masking and social-distancing guidelines has been spotty. 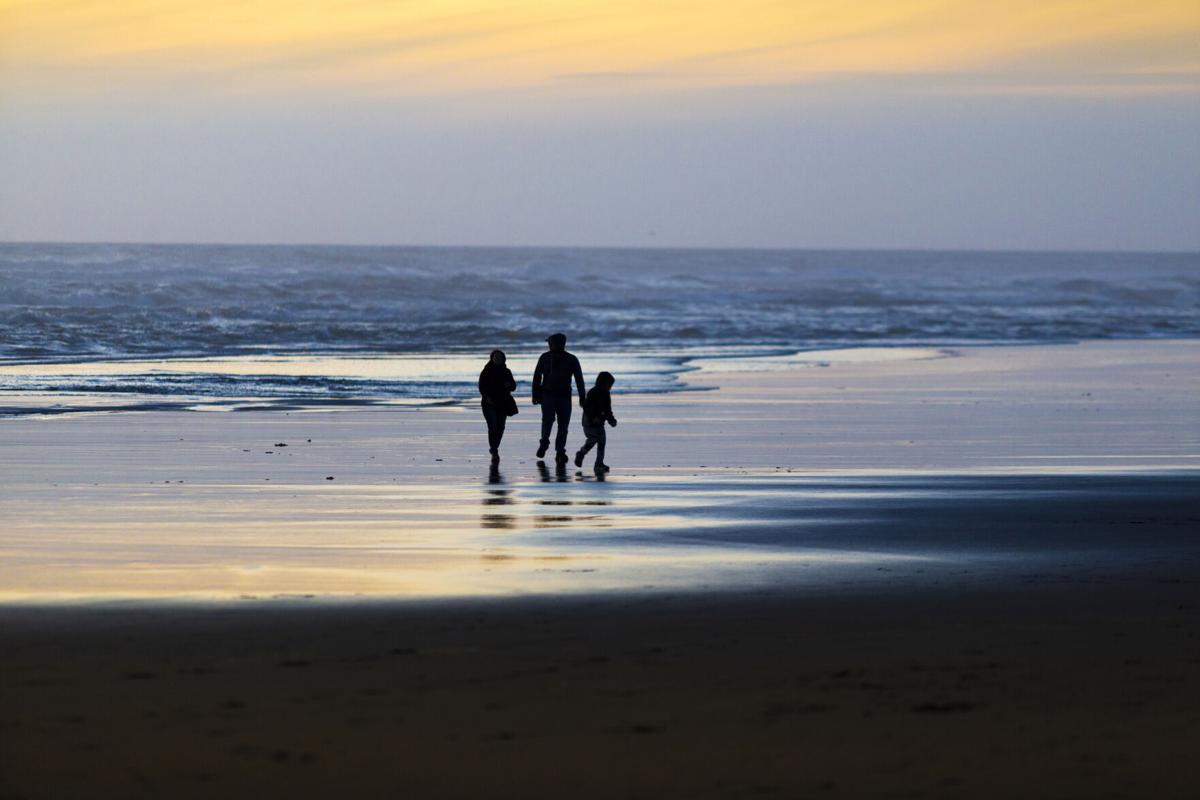 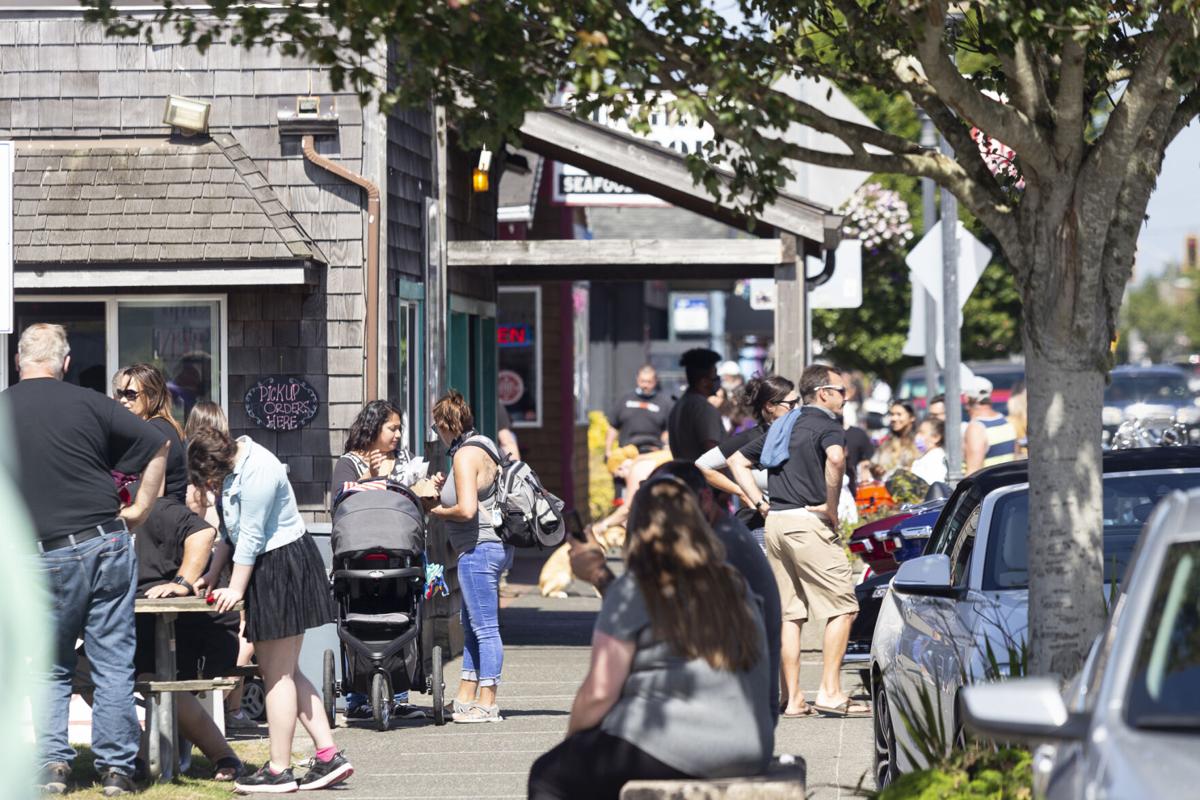 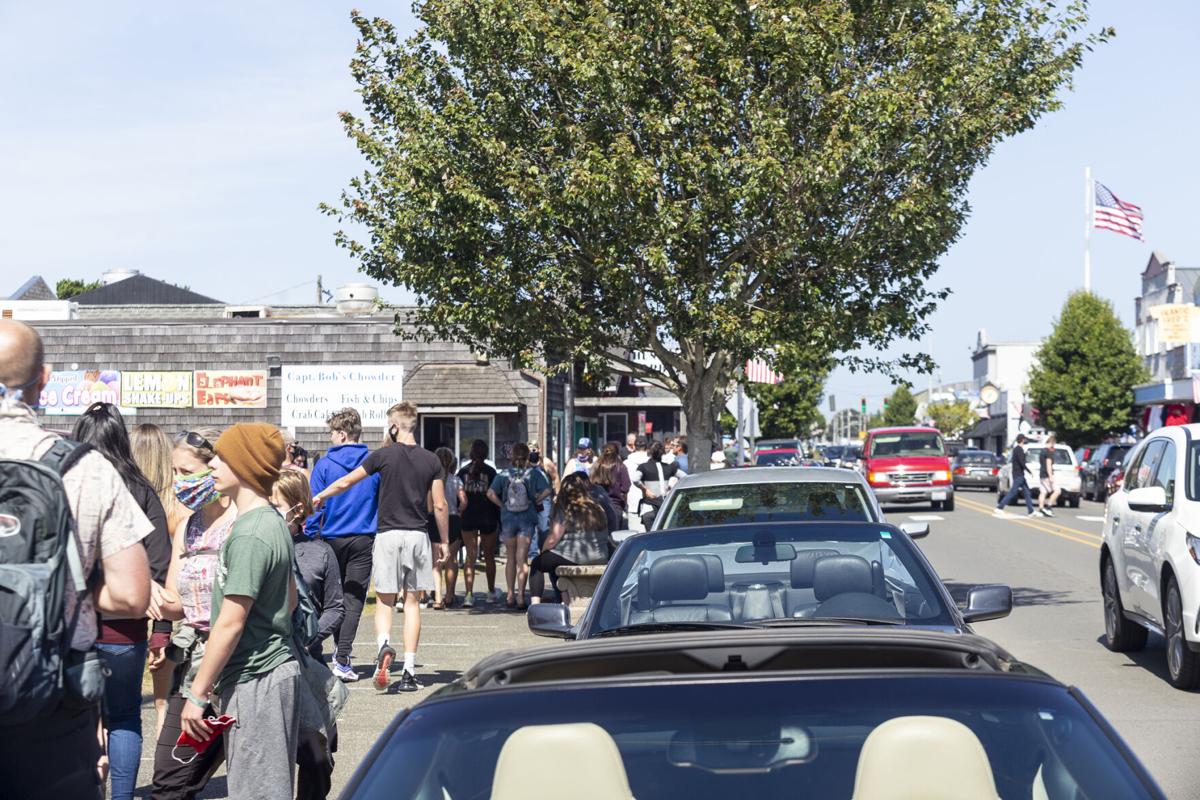 People pack the streets and sidewalks along Pacific Avenue on Saturday, Aug. 29 in Long Beach. 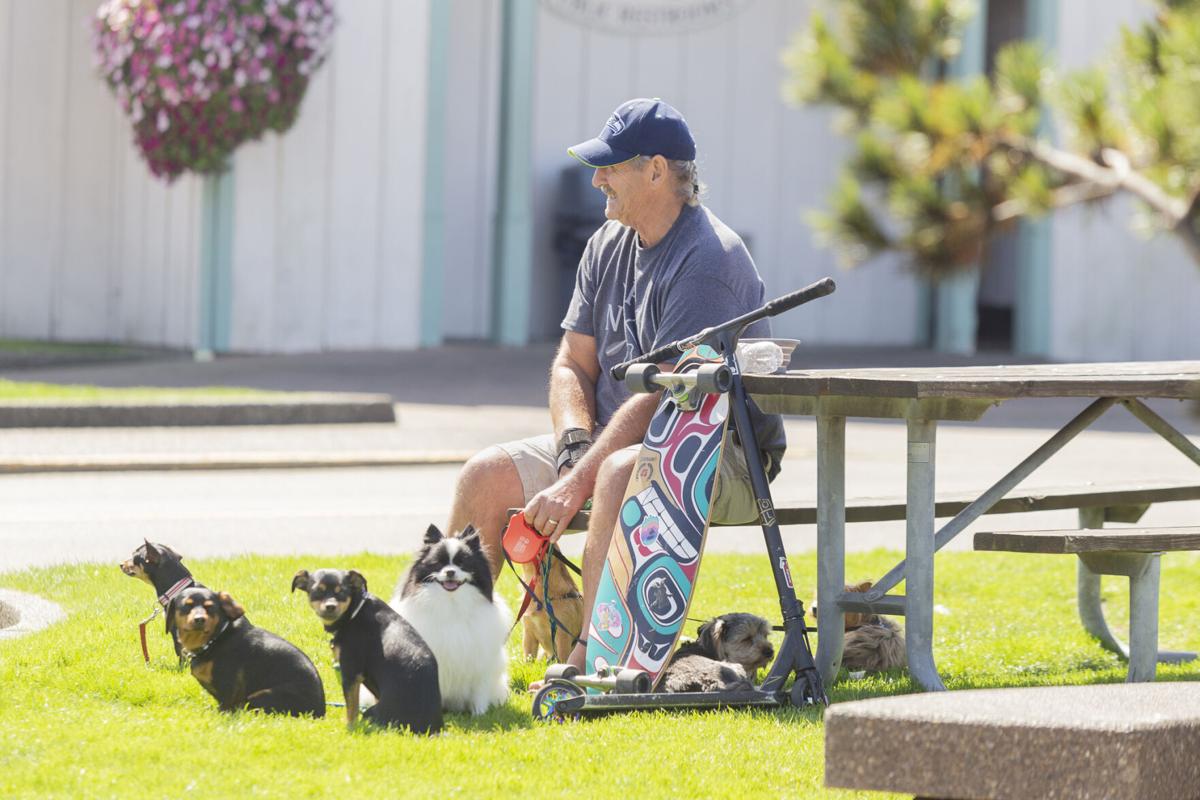 Charles Colvin, of Gig Harbor, had his hands full with seven dogs on Saturday, Aug. 29. “Five are mine,” said Colvin holding a leash attached to a yorkie, pug, pomeranian, two Chihuahuas and two dachshunds. 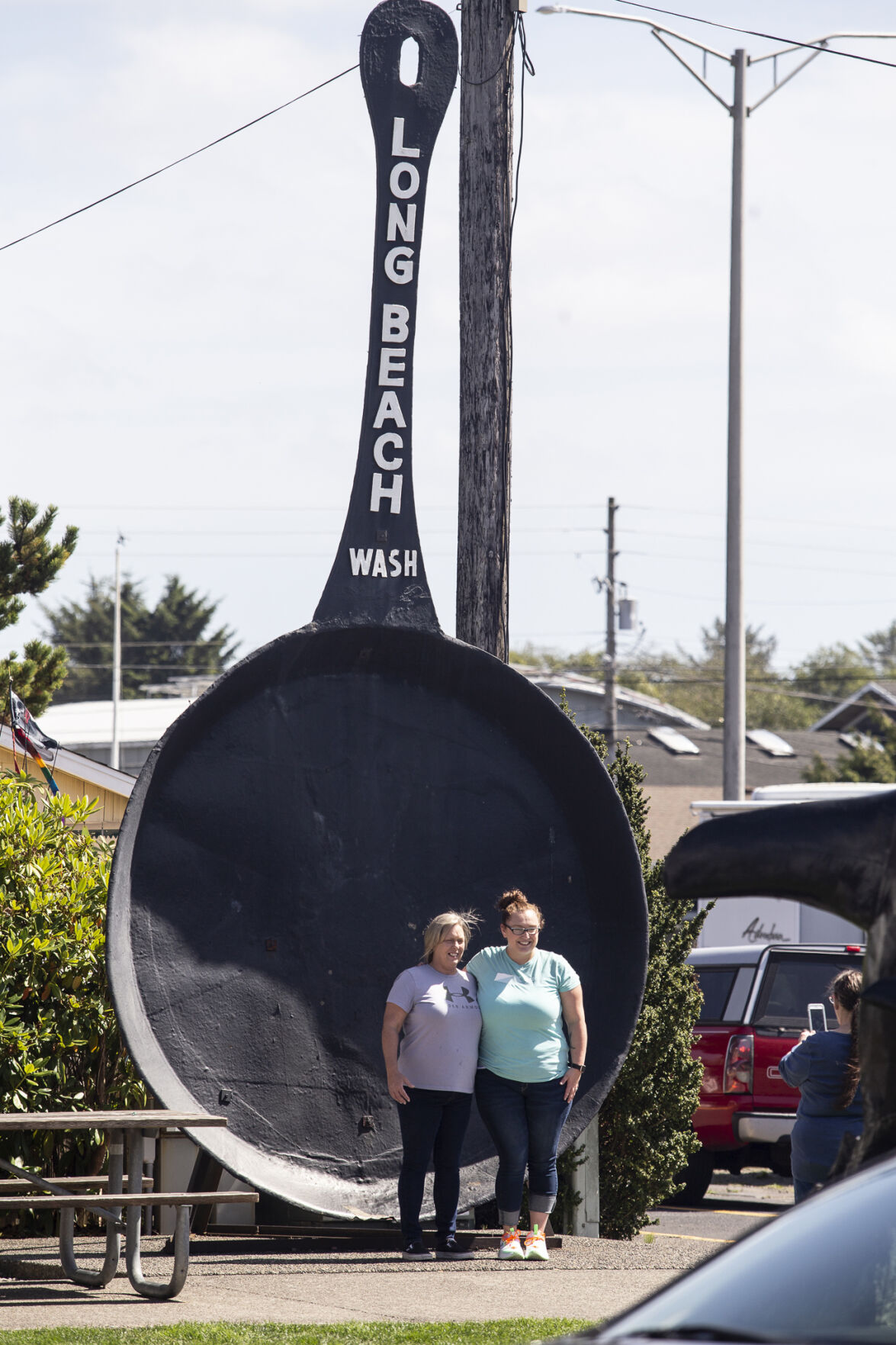 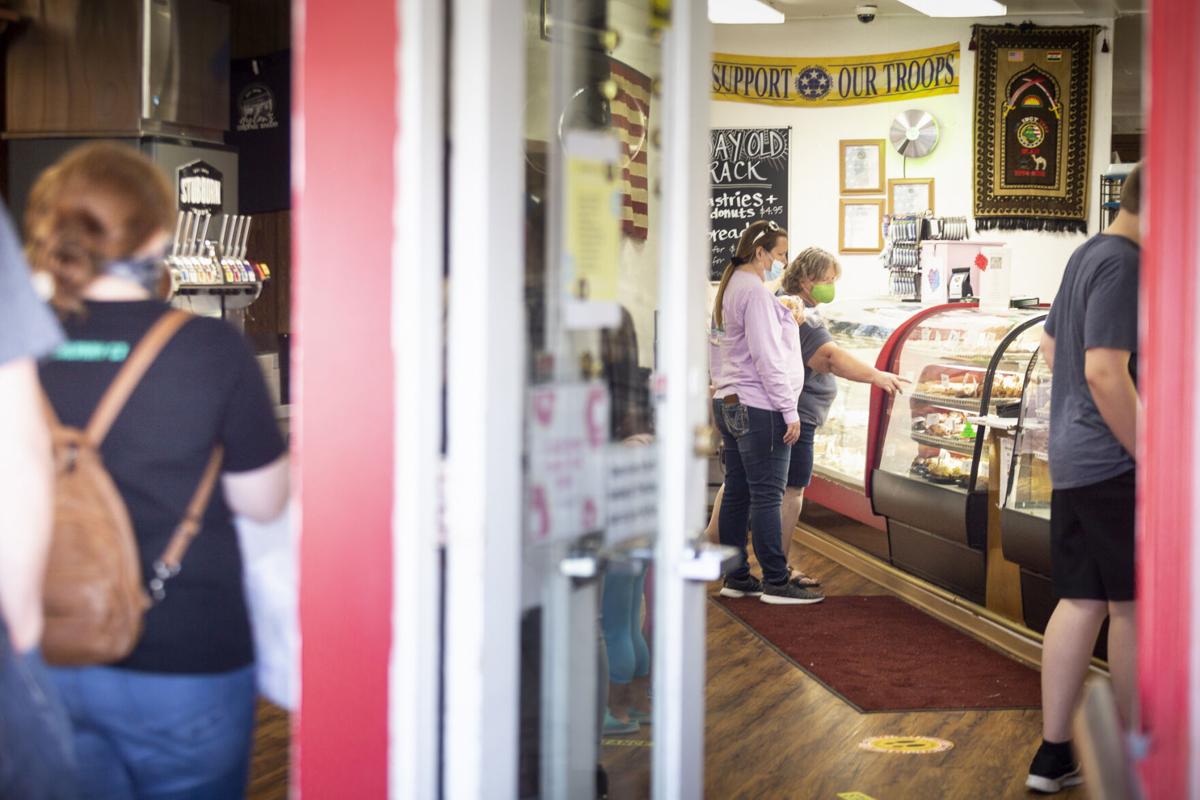 Customers make a selection as others enter at Dylan’s Cottage Bakery on Saturday, Aug. 29 in Long Beach. Local businesses saw brisk business over the weekend with a busy downtown. 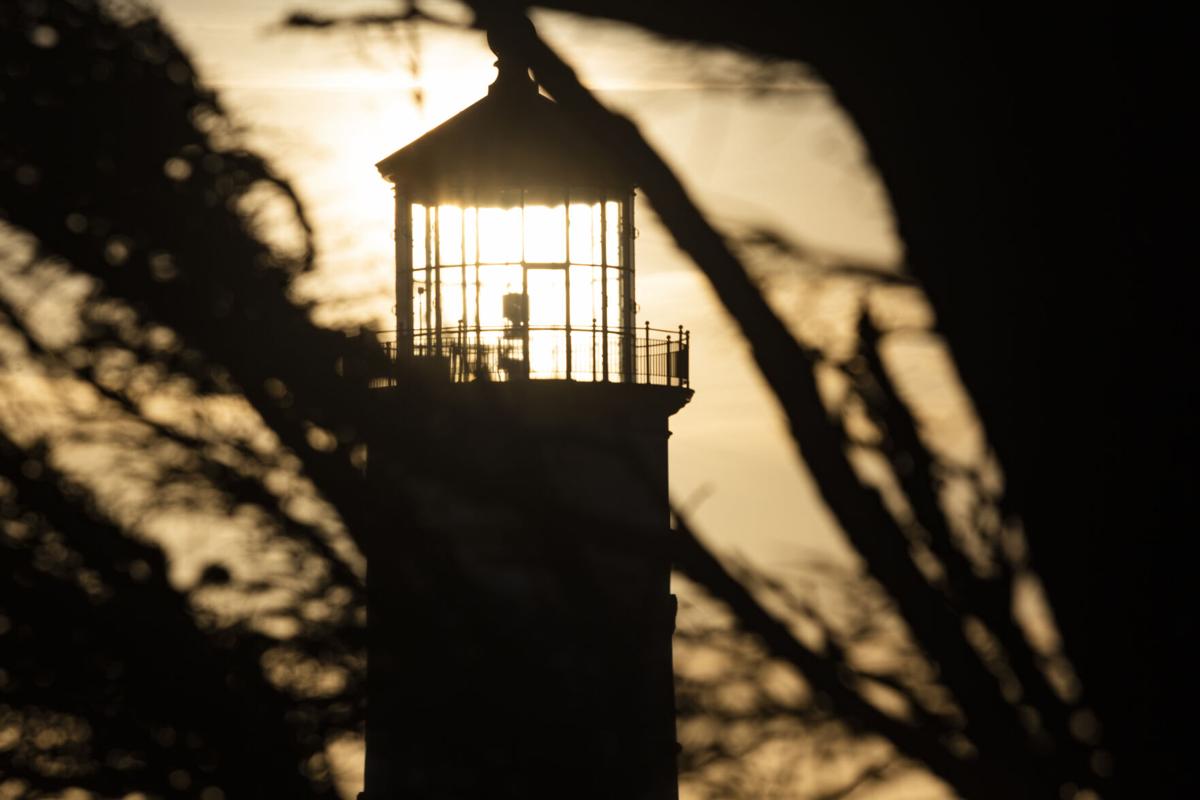 Late-summer crowds including car and foot traffic filled downtown Long Beach on Saturday, Aug. 29. Compliance with masking and social-distancing guidelines has been spotty.

People pack the streets and sidewalks along Pacific Avenue on Saturday, Aug. 29 in Long Beach.

Charles Colvin, of Gig Harbor, had his hands full with seven dogs on Saturday, Aug. 29. “Five are mine,” said Colvin holding a leash attached to a yorkie, pug, pomeranian, two Chihuahuas and two dachshunds.

Customers make a selection as others enter at Dylan’s Cottage Bakery on Saturday, Aug. 29 in Long Beach. Local businesses saw brisk business over the weekend with a busy downtown.

PACIFIC COUNTY — As summer begins to draw to a close and disease activity in Pacific County has fallen off the map, county health officials are bracing for a pair of busy weekends that will bring tens of thousands of visitors to the area and are asking residents to remain vigilant.

Stephanie Michael, health manager for the Pacific County Public Health and Human Services Department, said a return to some semblance of normal this fall, including students being able to physically return to school in a limited capacity, is in the community’s hands and will hinge on how responsible people are during Labor Day weekend and in the weeks after.

“The idea of maybe being able to get some kids back in the classroom in a safe manner really depends on our community spread,” Michael said. “The controls are in our hands. Everybody has an impact on this, and it’s everybody’s individual choices that are going to impact the community at-large.”

As of print time for the Observer on Sept. 1, just one additional case of covid-19 has been reported in the county over the past two weeks and the county’s case rate shrank to 37 new cases per 100,000 people over a two-week period as of Aug. 30, the most recent update from the state Department of Health’s risk assessment dashboard. The rate drop equates to Pacific County being in a low-to-moderate risk category when it comes to considering in-person schooling, after weeks of being firmly in the high-risk category.

“Right now we’re looking pretty good, but that can change [for the worse] just as easily as it changed for the better,” said Michael. “We need to be constantly vigilant, especially as we start getting into these events when people are just used to congregating and being social. That can spell a lot of trouble for our disease rate.”

Following the Fourth of July weekend, which brought crowds on par with or even exceeding Fourth of July weekends from recent years, covid-19 activity in the county rose markedly. On July 1, there were 17 total cases in Pacific County over the previous four months. By Aug. 1, 38 total cases had been reported, a 124% increase of new cases in just a month’s time. The count doesn’t include out-of-county visitors who may have caught — and spread — covid-19 before returning home.

The weekend following Labor Day, Michael pointed out, is traditionally when the annual Rod Run to the End of the World is held in Ocean Park. While Beach Barons Car Club members voted in July to cancel official Rod Run activities and the car show for that weekend, Michael said the county is hearing through unofficial channels about people still planning to travel to the peninsula to partake in events not officially a part of Rod Run.

“When we have a lot of movement of people, whether they’re symptomatic or more than likely asymptomatic — because hopefully most people that are sick are staying home — that’s when this disease spread happens,” Michael said.

Throughout the summer surge in cases, the county was able to ensure that everyone who needed to be tested was able to do so and that the testing capacity was able to withstand the busiest of days, Michael said.

Rapid-result testing at Willapa Harbor Hospital in South Bend has proved to be a popular option for Pacific County residents, and the county itself continues to host two drive-through testing days per week at the Long Beach Fire Department, with results now usually coming back in two or three days.

The most tests reported in a single day in the county has been 55, on Aug. 19. Pacific County’s seven-day rolling testing average has rarely eclipsed 20 tests per day, and usually hovers in the mid teens. Overall, 2,039 tests have been conducted in Pacific County since the start of the pandemic, representing 9.3% of the county’s estimated population.

The Long Beach site alone has the capacity to conduct about 70 tests in a day if need be, Michael said, but the daily demand has topped out in the low 20s at its busiest period in late July and early August, with less than 10 tests per day being the norm.

Additionally, Ocean Beach Hospital and its clinics are now performing drive-up testing two days per week, on Mondays and Thursdays, for its established clinic patients that have received an order to get tested from one of the hospital’s providers, according to CEO Larry Cohen. If a provider believes a test needs to be done sooner than the next scheduled drive-up testing day, the patient can be sent to the emergency room to get tested.

For now, tests conducted at OBH and its clinics for established patients are being sent to an out-of-area lab for analysis. However, in the next couple of months, OBH may be able to start processing the tests in-house after receiving an analyzer that can do PCR molecular testing — the same type of test done by the national lab companies.

Cohen said it took three months for OBH to receive the analyzer, though, and it still must receive covid-19 test cartridges from its vendor before having the ability to conduct and then process the tests at the hospital — which can provide results in about an hour. The vendor has told OBH it will not receive the needed testing cartridges until October, however Cohen said the date is a moving target.