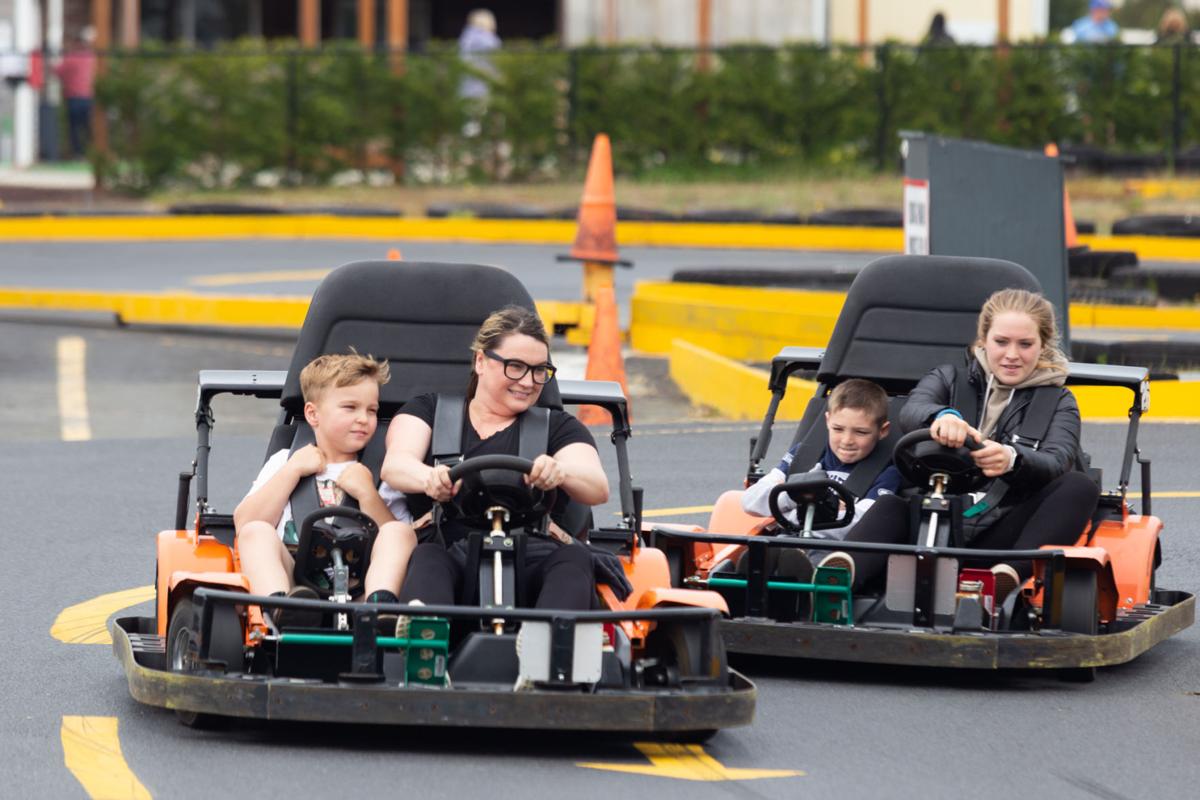 The beaches were crowded over the Memorial Day weekend with cars coming and going for most of the day on Saturday, May 23. It was the first weekend in more than two months that people were allowed to drive through the Long Beach approaches. 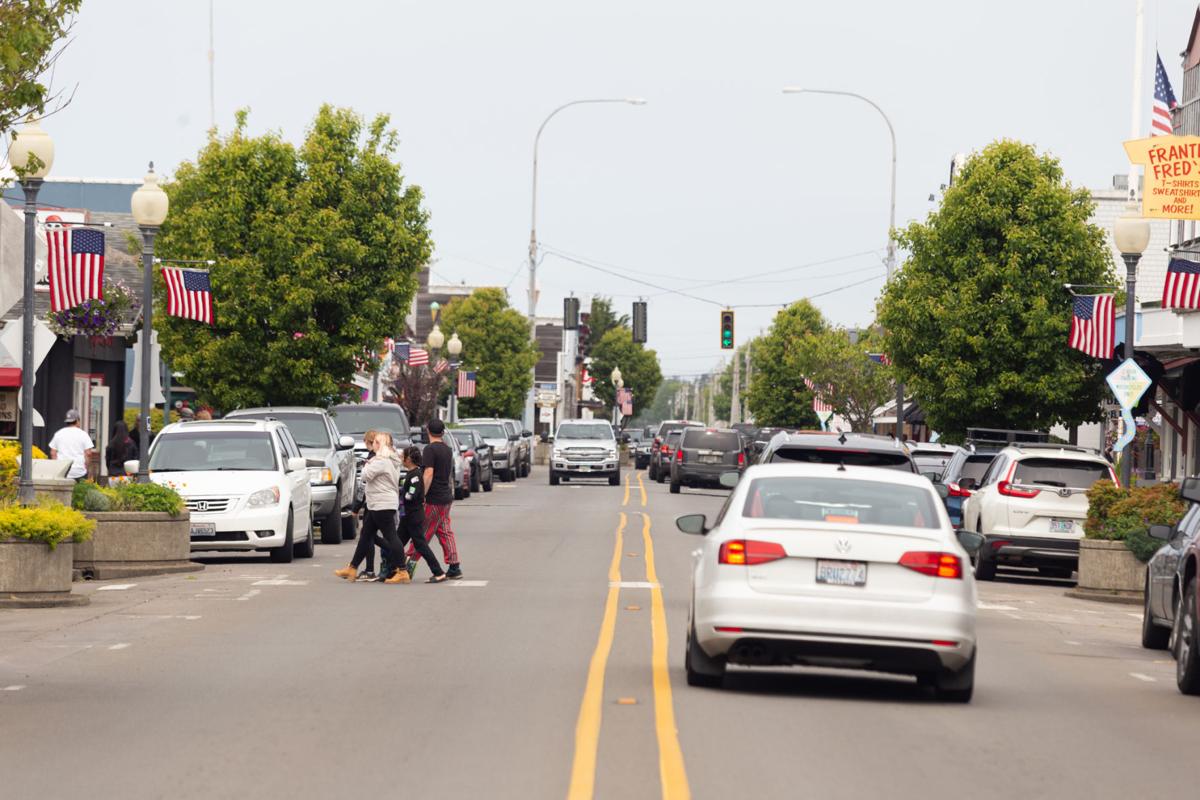 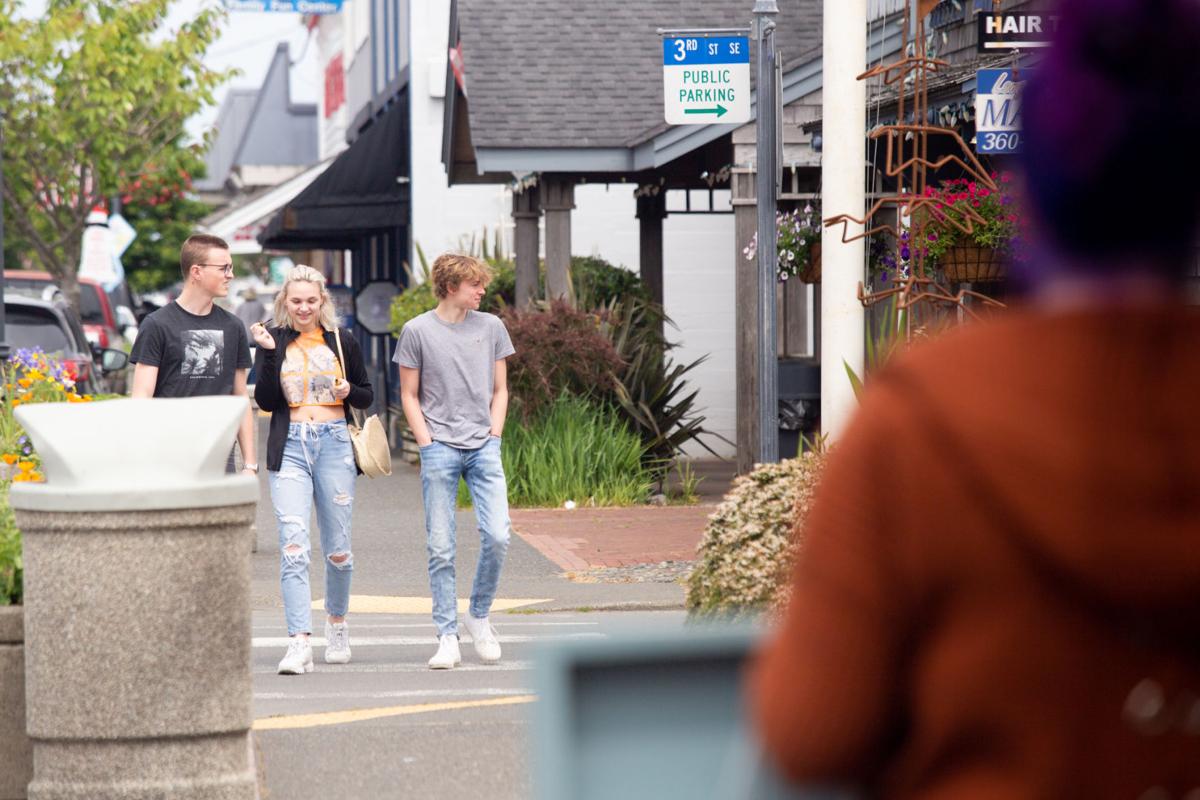 Conner Hrutfiord, 16, Bella Hrutfiord, 15, and Chris Granger, 19, all of Blaine, walk through downtown Long Beach on Sunday, May 24. The trio were among an influx of visitors over the weekend. 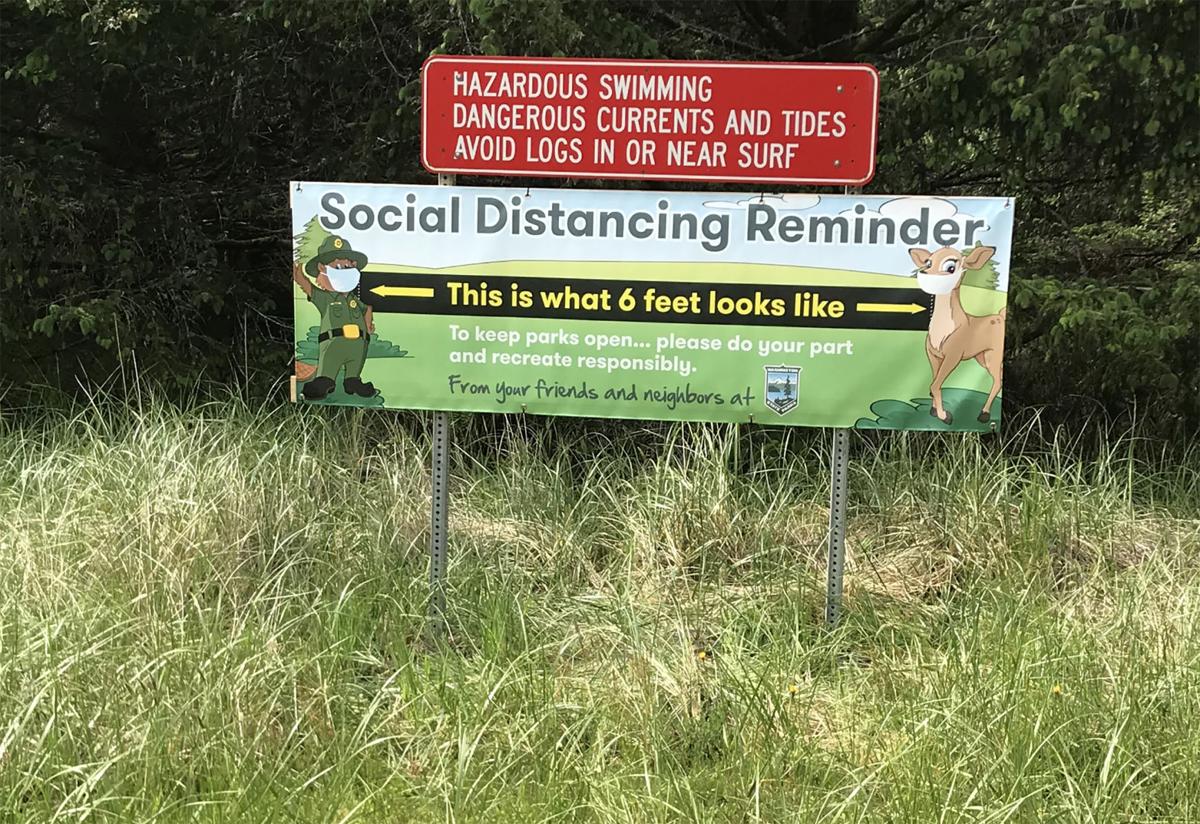 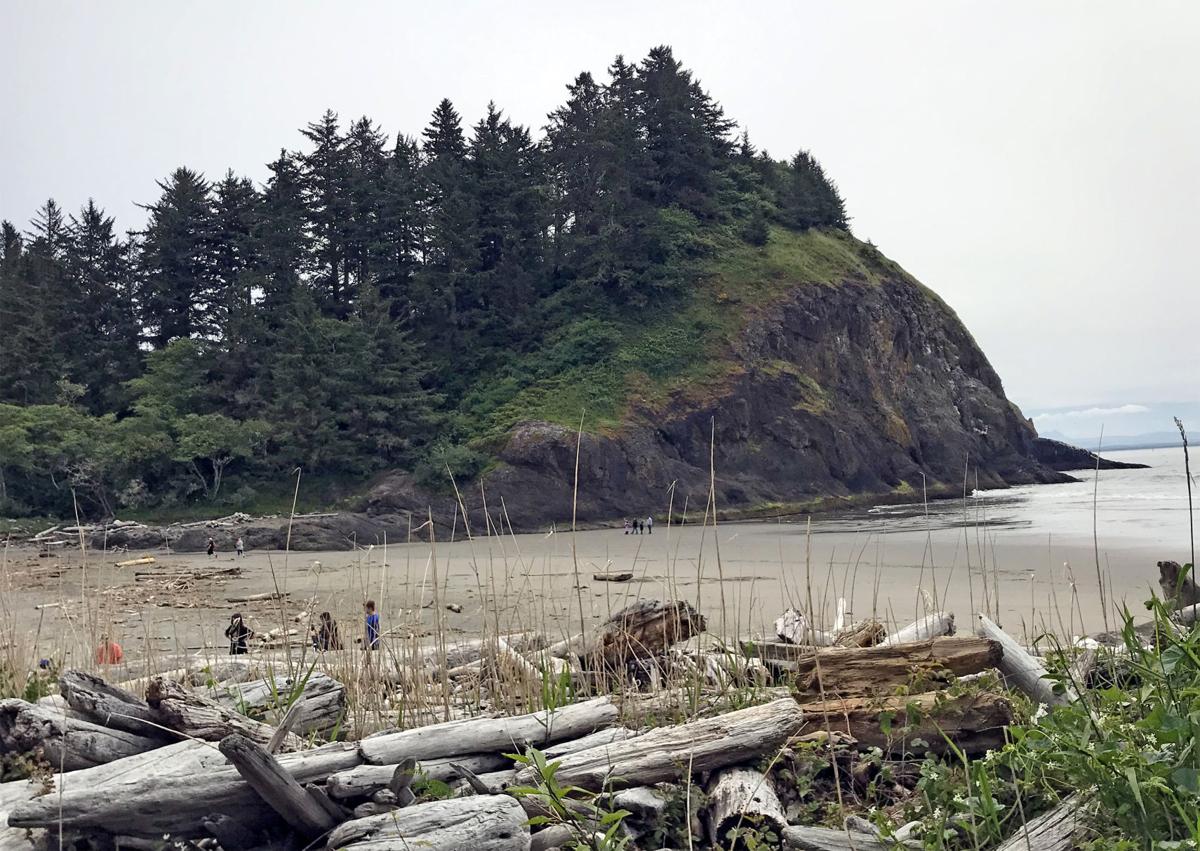 The beaches were crowded over the Memorial Day weekend with cars coming and going for most of the day on Saturday, May 23. It was the first weekend in more than two months that people were allowed to drive through the Long Beach approaches.

Conner Hrutfiord, 16, Bella Hrutfiord, 15, and Chris Granger, 19, all of Blaine, walk through downtown Long Beach on Sunday, May 24. The trio were among an influx of visitors over the weekend.

PACIFIC COUNTY — Pacific County was approved to move into phase two of reopening on Saturday, May 23; but even as businesses prepared to resume operations, business owners are worried they won’t be able to come back from the devastation of the two-month closure.

Washington Secretary of Health John Wiesman approved Pacific County for a variance to begin phase two about 24 hours after the Pacific County Board of Commissioners voted to submit its application.

The phases are how Gov. Jay Inslee is lifting his “Stay Home, Stay Healthy” order, which was issued on March 23 to prevent the spread of covid-19. Each phase removes limitations set by the order. Phase one, for example, allowed ongoing construction work to resume and expanded what outdoor recreation was allowed. Counties without a variance are in phase one. While each phase was estimated to last about three weeks, that is subject to change based on covid-19 activity.

The commissioners approved a plan for a full variance, which allows: new construction to begin; restaurants to reopen at 50% capacity with no bar seating allowed; hair and nail salons, as well as barbers, to see clients; and state parks connected to beaches to reopen for day use.

Also under phase two, the county partially lifted its hospitality lodging ban. Pacific County lifted the order as soon as it was approved for the variance. Starting Saturday, May 23, hospitality businesses with approved safety plans are allowed to reopen at a reduced capacity.

Reservations for vacation rentals must be for a minimum of 24 hours between check in and check out. Pacific County changed the minimum number of hours after vacation rental owners protested the limitation. The county waived the 72 hours, but required cleaners not to go in to clean for 24 hours after a guest leaves and no rentals can have a guest for more than 15 days.

During the May 22 public meeting on whether to submit its application for a variance, the Board of Commissioners listened to more than two hours of public comment from business owners and residents of the county.

The majority of people who spoke supported Pacific County moving into phase two. Some, such as Doug Levitt, had reservations about what risks the community could face from tourists coming into the county.

“We don’t know, so far we’ve been lucky but what if that one person comes in here, that’s what’s scary right now, we don’t know,” Levitt said.

But, Dan Hanson, owner of the Pitchwood Alehouse and Inn, 425 Third St #1713, Raymond, said his business needs to reopen and he believes it can be done safely. People who aren’t an owner of a service business don’t understand, but the profit margin for his operation is about 3 to 4%, he said.

While he and his wife are retired, his concern isn’t for his personal wealth, but for his 20 or so employees who could be out of a job. We’re looking at mass unemployment if things don’t start opening up, Hanson said.

Others called for more help from the county overall. Cheryl Yancey owns Beach Ballet, 811 S. Pacific Ave. #18, Long Beach, and said her business doesn’t qualify for many of the Washington State Small Business Administration loans. She applied for multiple arts grants and was approved for several, but then put into pools of more than 100,000 people all competing for the grants. So far nothing has happened, she said.

“To keep my little business open I’ve actually cleared out my savings account and paid my rent through the summer because I want to guarantee my students a place to go when we can reopen,” Yancey said.

Yancey walked through all the precautions she would take if she was allowed to reopen, which would include limiting to three students in the studio at a time, and using thick vinyl curtains to separate students. But, she hasn’t received clarification on whether she would fit into phase two or phase three of reopening. She asked for more guidance from the county and the state.

Coastal fishing reopened on May 26.

The open marine areas include waters off Washington’s Pacific coast from the mouth of the Columbia River on the Washington-Oregon border north to Cape Alava on the Olympic Peninsula, as well as Willapa Bay and Grays Harbor.

In a news release Friday, May 22, the Washington Department of Fish and Wildlife announced the reopening of Marine areas 1-3 for bottom fishing, shellfish, mussels, clams, oysters and others species in the Washington Sport Fishing Rules pamphlet.

Crabbing on the Columbia River is also set to resume under normal regulations on May 26.

“Razor clam digs bring thousands of people to travel to the coastal counties from all over the state and constitute a gathering under the ‘Stay Home, Stay Healthy’ order,” Snyder said. “This order has been extended to May 31, so razor clam digs and similar large gatherings are not allowed at this time.”

Halibut will also remain closed in these areas, due to port closures and concerns about the spread of the coronavirus in local communities.

The Makah and Quileute reservations, including marinas and all services, remain closed to visitors. Anglers should not attempt to access the ocean from these areas.

WDFW continues to communicate with public health experts, port commissioners and tribal co-managers regarding these opportunities in the future.

“We’ve continually said we will only open fisheries when local communities feel it is safe to do so, and with the full cooperation of public health officials,” said Larry Phillips, director of WDFW’s coastal region. “While not everything is reopening right away, this is a huge step toward returning to typical fishing seasons along the coast. Some of Washington’s best fishing takes place in the ocean, and we’re excited to see people getting back out there, even if the experience is somewhat different.”

Anglers should check ahead of time if their preferred destination or launch is open. Some local marinas or facilities – including tribal lands – remain closed, and anglers should be prepared to change plans if their first choice is closed or too congested.

Additional fishery closures may be implemented if anglers attempt to launch from closed access sites.

Anglers will also need to follow state guidelines by continuing to recreate in their local communities, traveling only with family or other members of their immediate household, and have physical distance by keeping 6-feet apart.

“We’re reopening in consultation with local public health officials, and consistent with the governor’s phased approach,” Phillips said. “It’s extremely important that we all continue to do our part to keep ourselves and our communities safe and healthy.”

Barricades were removed early Sunday morning to allow visitors to drive into the 2,023-acre site, one of the most popular in the Washington State Parks system. Although never really closed to walk-in pedestrian visitors, many Pacific County residents and the park’s countless fans around the region missed the option of driving in to observe waves crashing against the cliffs, fish on North Jetty, picnic on Benson Beach and enjoy other attractions.

On Sunday, a small but steady stream of vehicles entered the park, with visitors playing on Waikiki Beach and watching a school of porpoises cavorting in the calm pool south of the jetty. Ten bald eagles of varying ages could be observed on and near Benson Beach.

The camping area of the park remained closed Sunday, but park staff were busy maintaining spring vegetation around the campgrounds and getting set to welcome overnight guests whenever that option is permitted. Park workers have accomplished many chores during the closure, including a substantial amount of cleanup in the area where workers completed renovating North Jetty last year.

A number of signs have been installed to remind campers and hikers to maintain at least six feet of separation from people not from their own households.

Discover Passes are once again required to park inside Cape Disappointment and other Washington State Parks facilities.