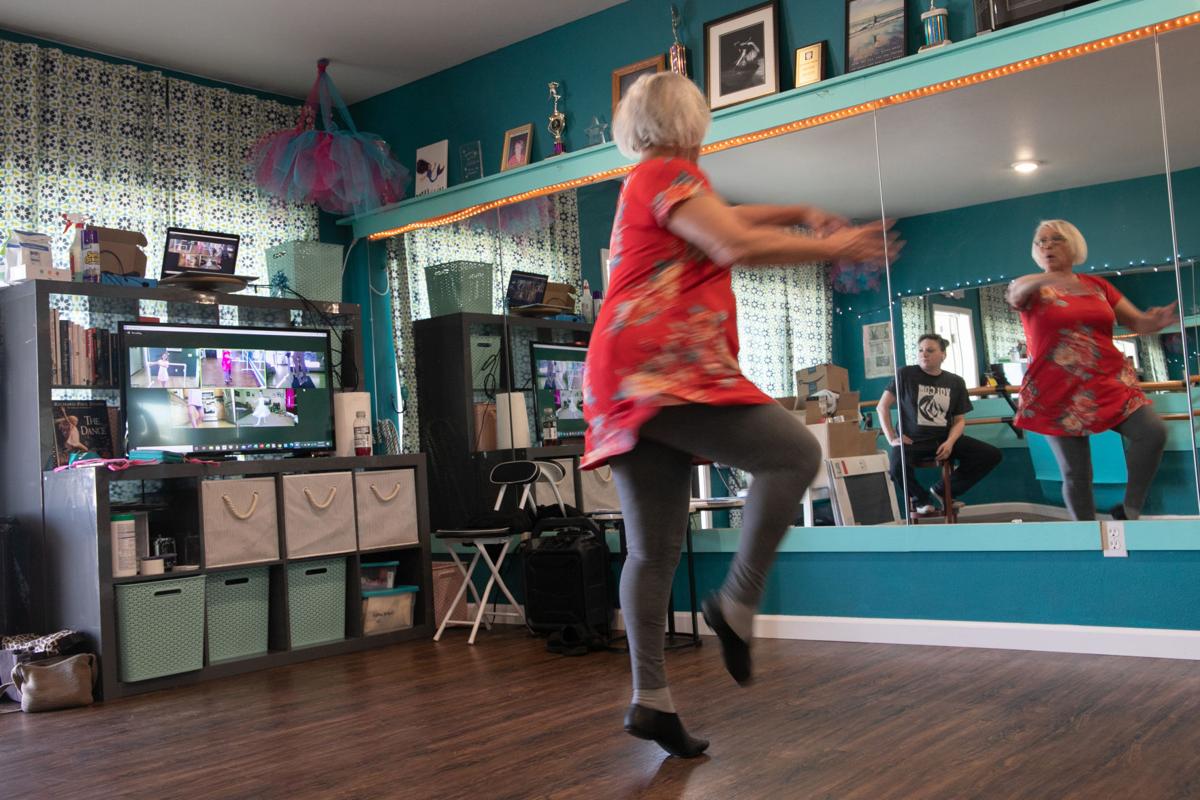 Cheryl Yancey spins during her virtual Zoom class. While virtual teaching works to an extent, it present difficulties, such as correcting students’ form. 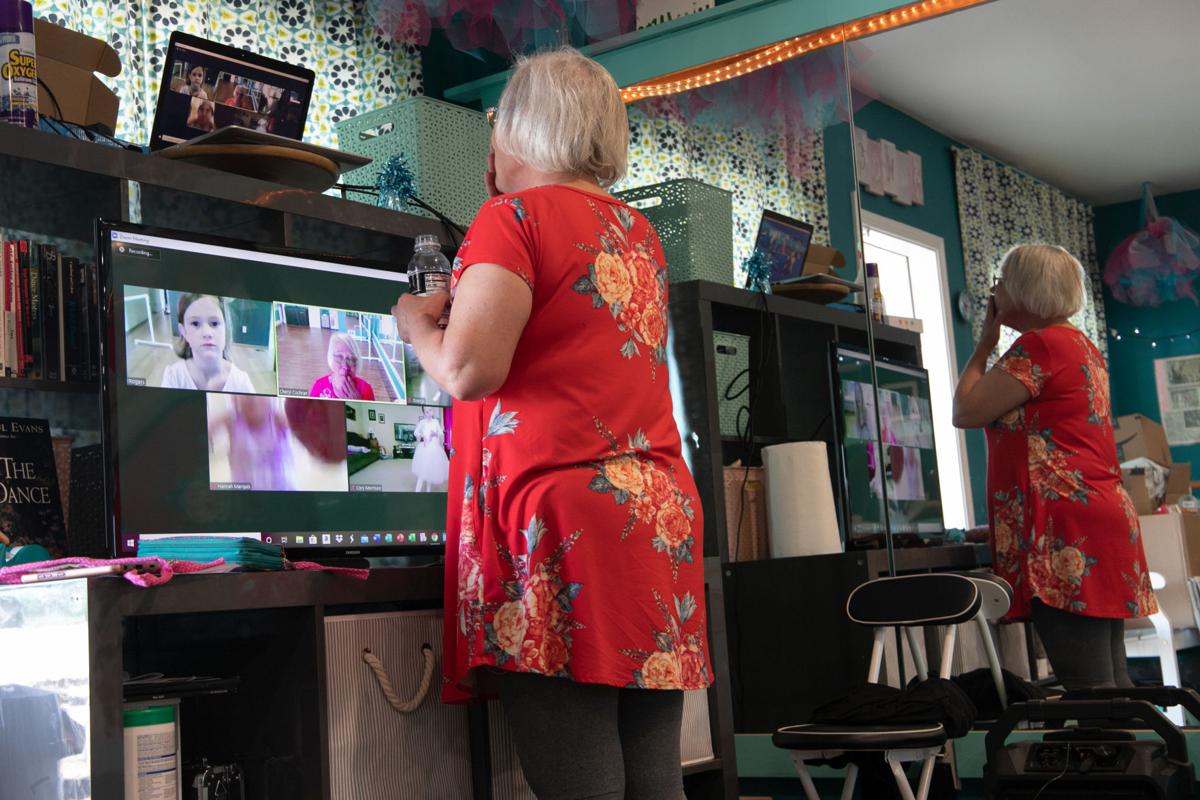 Cheryl Yancey, owner of Beach Ballet, uses a Zoom link to teach ballet to a group of students ages 6 through 12.

Cheryl Yancey spins during her virtual Zoom class. While virtual teaching works to an extent, it present difficulties, such as correcting students’ form.

Cheryl Yancey, owner of Beach Ballet, uses a Zoom link to teach ballet to a group of students ages 6 through 12.

As businesses and governments start to return to normalcy after the disruption caused by the covid-19 pandemic, some are frustrated by how difficult it is to get clear answers from the state on how to move forward. And some businesses see the focus on reopening as a distraction as they call for more relief funding from state, county and city governments.

When Gov. Jay Inslee issued his plan for restarting the state and said government buildings would not reopen until phase three, the county tried to get clarification from his office, said Kathy Spoor, Pacific County Administrator.

“All of us were a little caught off guard,” Spoor said.

The county tried to get clarification from the governor’s office about whether it could reopen, which it did not receive.

Before approving the plan to allow the public back into county offices, the Pacific County Board of Commissioners consulted Chief Deputy Prosecutor Ben Haslam. Since essential services are exempt from Gov. Jay Inslee’s “Stay Home, Stay Healthy” order, Haslam said the county was safe to reopen public-facing services.

The county announced its reopening on May 27. In its announcement it detailed the enhanced safety requirements for visiting the county courthouse, which included mandatory face masks for employees and visitors.

“If the governor’s office reaches out to us we’re more than happy to have a conversation with them, and explain where we are coming from and why it is appropriate to be doing what we’re doing,” Spoor said.

“This does not sound like something they should be doing right now under the phased approach,” Faulk said.

He did not provide any information on what that would mean for the county.

Cheryl Yancey owns Beach Ballet, 811 S Pacific Ave #18, Long Beach. On May 27, Yancey was in her ballet studio using a Zoom link to teach a group of students ages 6 through 12. Yancey spent hundreds of dollars on equipment for virtual dance lessons, which she is providing to her students for free. The classes aren’t as well attended as she’d like though. Her enrollment dropped by about 80% when her classes moved virtual.

Yancey taught her students to make ballet bars out of PVC pipes, but many students don’t have the space they need at home to do a dance class, Yancey said. Some can’t access the classes because of poor internet service.

“We’ve got to get them back in the studio,” Yancey said.

In a dance studio, people feed off one another’s energy and have a space to be creative, Yancey said. At home, it is easy to get distracted. It is also hard for Yancey to correct her students’ form.

With gyms reopening in phase two, Yancey hoped she might be able to start classes again. She reached out to the state, the county and the City of Long Beach. No one can give her a clear answer on whether she can reopen now, or if she must wait for phase three.

“They are lumping us in with these huge dance schools,” Yancey said.

Yancey took steps to make her studio socially distanced. When she reopens, she will limit her classes to three students at a time. She planned to hang vinyl shower curtains from the ceiling to provide dancers with their own space. Parents will not be allowed to be inside to watch the classes. She also bought special sanitizing wipes that will be gentle on her students’ skin when they are wiping down the ballet bars.

“We have so much talent in this area,” Yancey said. “I don’t want these dancers to lose their strength. I need this. They need this.”

Yancey doesn’t want to reopen without permission. She wants to do what is right. She just wants to know what that is, she said.

Pacific County Commissioners sent a letter on May 12 to Inslee asking him to give counties more control in how they reopen. Nineteen other county boards of commissioners signed the letter, including Wahkiakum, Grays Harbor and Lewis counties.

“We implore you to allow us to take local control with the help and support that the state can give,” the letter said. “Covid-19 is real and it is serious, but it affects every county differently.”

Pacific County Commissioner Lisa Olsen, who helped draft the letter, said the governor had not responded yet to the letter.

However, Karla Jensen, co-owner of Mermaid Inn & RV Park and president of the Long Beach Merchants Association, said it is too late for letters.

“We need to be using our voice at this point, we’re the poorest county that needs the most assistance and I don’t feel like anyone is screaming for us,” Jensen said.

For Jensen, the biggest frustration is the lack of help from the county and from the City of Long Beach in granting relief to some of these businesses. The city charges $80 a month per hole fee for sewage rather than just water usage. This was meant to help support the cost of sewage infrastructure for second homeowners, who might have little water usage for the majority of the year. But for Jensen, with 34 sewer holes and very few guests, she doesn’t understand why the city is still charging hotels while they were shut down.

Long Beach City Mayor Jerry Phillips said the city is looking into how to start a grant fund that would allow businesses to apply for relief from the city, but his concern about waiving sewer holes is that it may be seen as a prohibited gift of public funds. But he said he is looking into the issue.

On the county level, Jensen said businesses in Long Beach are going to struggle to pay property taxes on June 1.

“Our bill is due June 1 and we still haven’t been open, and after June 1 we’ll start getting penalties and fees. So how is the county going to help our businesses,” Jensen said.

Pacific County Treasurer Renee Goodin said she could not extend the property tax deadline any further, and she would not waive penalties and fees for late payments. Without property tax revenue, the county won’t be able to make its bond payments, which would affect its bond ratings, Goodin said.

Goodin acknowledged some counties are allowing people to apply for a property tax exemption and it is within the treasurer’s power to do that, but she doesn’t believe that would be fair.

“I just didn’t want to do it on a case-by-case basis,” Goodin said. “There are always people that are really struggling that never ask for help. It would be picking and choosing which ones deserve an exemption and I don’t think it is right to have someone come in and prove their hardship.”

In 2019, the county made about $628,000 from penalties and interest on late payments for property taxes. It is a fairly significant source of revenue for the county, said Paul Plakinger, management and fiscal analyst for the county.