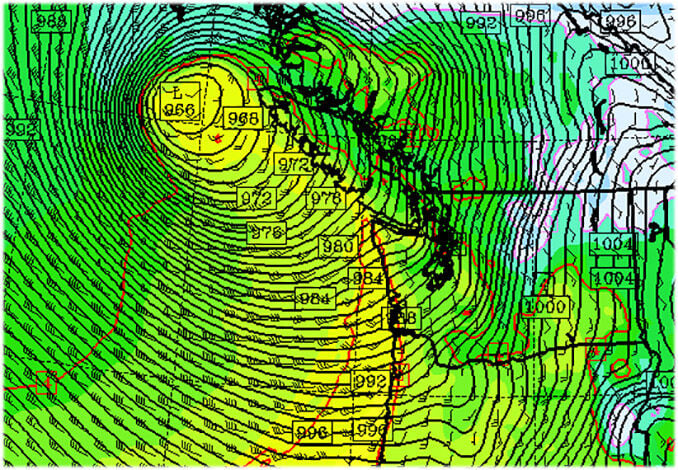 A potent storm system packing a low pressure of 960 hPa — an intensity usually confined to the Gulf of Alaska — is expected to be in our vicinity this Friday. 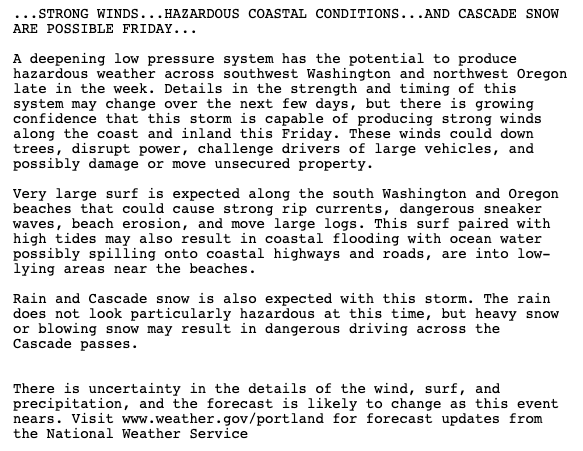 A potent storm system packing a low pressure of 960 hPa — an intensity usually confined to the Gulf of Alaska — is expected to be in our vicinity this Friday.

It’s been almost 13 years since the Great Gale of 2007 ravaged the coastal Pacific Northwest with strong winds, punishing rainfall, and left some residents in the dark for days. Uncertainty remains, but the region is currently in the bullseye for a similarly strong wind storm later this week.

The approaching weather system is associated with severe tropical storm Atsani that hammered part of the northern Philippines on Nov. 6.

Current forecast models have the storm arriving late in the evening on Nov. 13, bringing strong winds, large coastal waves and heavy rainfall. It is expected to have a low pressure between 968 and 973 millibars, nearing the 952 millibars reading from 2007.

Tidal flooding is possible in Raymond and on beach approaches. People should expect dangerous conditions on beaches.

“It may push flooding into the areas we often see it in Raymond. … We have seen times in the past where we have had wave activity coming all the way up the beach approaches, and this could be one of those times. Anybody that is out of the beach on Friday will need to be extremely careful and extremely cognizant of what the wave conditions are like and understand we could have sneaker waves come way up on the beach.”

“There is considerable uncertainty regarding this storm, so let’s wait until Wednesday before getting our hopes up,” University of Washington meteorologist Cliff Mass said Nov. 9. “This is a very difficult forecast depending on getting not only the intensity of the storm right, but its exact path.”

Mass said the low-pressure system’s intensity “would be associated with very strong winds (50-70 mph at least) plus big waves.”

The National Weather Service in Portland said Tuesday in a special statement there is growing confidence about impacts that could last a punishing two days, including widespread power outages due to fallen trees and other debris. Residents are urged to begin preparations now ahead of the storm and to have enough food, water and other necessities in case the power goes out.

“This is potentially a significant storm event, but [it’s still early] and the models aren’t in enough agreement to say specifically [what] is going to happen,” McDougall said. “I sent out an email to county employees suggesting [since] many people are going to have the day off on Wednesday that it’s an excellent opportunity … to make it a day of preparation.”

Visit www.weather.gov/portland for forecast updates, which will be shared at www.chinookobserver.com.