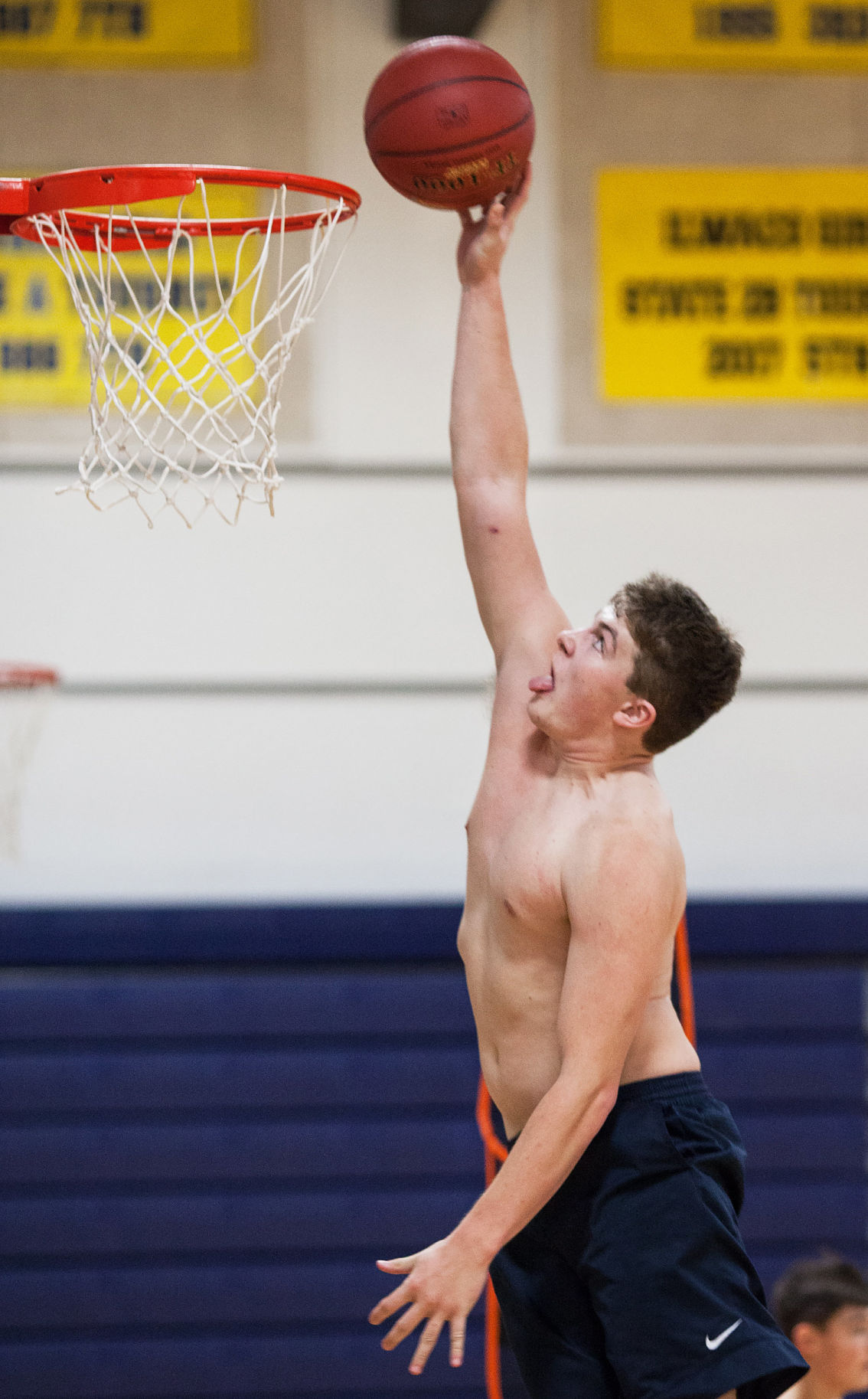 Ilwaco senior Reese Tynkila went up for a dunk during a recent IHS boys basketball practice. 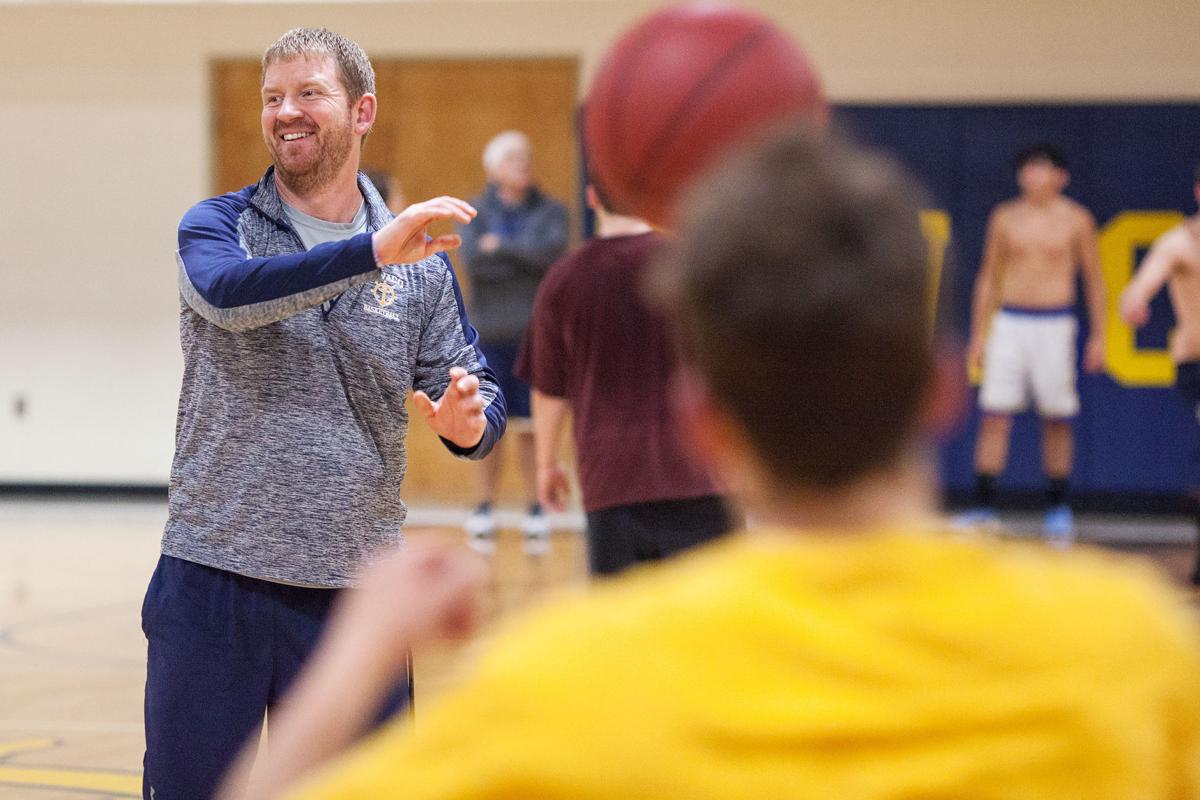 IHS boys basketball coach Tim Harrell fed passes to his players during a drill at a recent practice in November. He is now the athletic director. 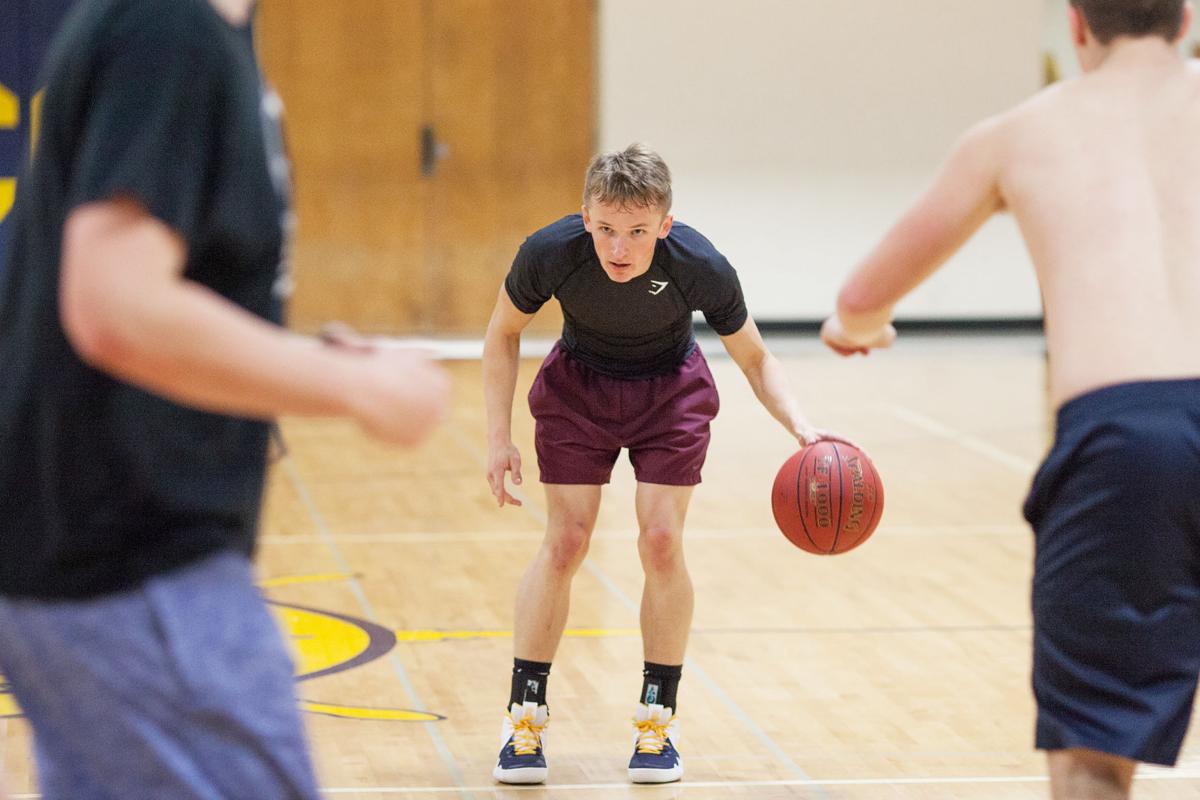 Ilwaco senior Alex Kaino sized up the defenders during a full court drill at a recent IHS boys basketball practice.

Ilwaco senior Reese Tynkila went up for a dunk during a recent IHS boys basketball practice.

IHS boys basketball coach Tim Harrell fed passes to his players during a drill at a recent practice in November. He is now the athletic director.

Ilwaco senior Alex Kaino sized up the defenders during a full court drill at a recent IHS boys basketball practice.

ILWACO — This year’s Ilwaco boys basketball team will be mostly familiar to fans who have watched them the last two or three years. Alex Kaino and Reese Tynkila assumed prominent roles as freshmen at point guard and power forward back in 2015. Classmates John Glenn and Tenyson Ramsey joined them in the varsity rotation at the wing spots the following year. Jeb Sheldon started seeing more time in the post last year. All five are back for their seniors seasons.

What’s new is that the 6’8” junior Joe Nisbett has refined his game and enters the rotation, giving the team a new dimension. Nisbett showed promise during summer basketball season. Ilwaco’s passers targeted him near the basket, and he usually came through. Coach Tim Harrell looks for major rebounding contributions from him.

“He can eat up some rebounds. (League Champion) Life Christian has beaten us up over the years on the glass and inside,” Harrell said.

Tynkila’s combination of athleticism, strength, and shooting has always presented matchup problems for opponents. Nisbett’s presence makes things that much harder for defenses.

“I’ll be in the post, driving to the basket… Joe takes people down low,” Tynkila said. Rotating Tynkila, Sheldon and Nisbett, the Fishermen will almost always have two powerful interior players on the floor.

“Reese is physically very strong and athletic,” Harrell said. “He creates his own shots. Then it’s a matter of getting Joe looks. The kids have gotten used to (feeding Nisbett.)”

Another emerging junior is Parker Kaech, a long-armed, athletic wing player whom Harrell sees as one of the team’s two ace defenders, along with Kaino. Kaino has the speed to control even the fastest guards, while Kaech has the frame to guard multiple positions. Kaech gives a bit of depth to the wing rotation that includes Glenn and Ramsey.

That depth is badly needed. Calvin Baze, whose playmaking often got Ilwaco out of offensive slumps last year, tore his ACL during summer basketball and is out for the season. Daniel Whiting, one of the team’s top three-point threats last year along with Glenn, is not playing this year.

“We thought we would have a nine-man rotation, and we’re down to seven,” Harrell said.

Juniors Blake Kukula, Brady Vinsonhaler and Nathaniel Douglas will be available if needed on varsity but will get junior varsity playing time. Jackson Wilkin, coming off a solid football season at running back, joins the basketball team after wrestling as a freshman. He will begin the year on junior varsity, as will fellow sophomore Desmond Diamond, who demonstrated his speed playing multiple positions on the football field. With 29 players coming for basketball this year, Ilwaco will have JV and C squad this year.

The Fishermen tied Chief Leschi for third in the Pacific League last year at 11-5. They finished behind Logan Walker’s Willapa Valley Vikings, with whom they split two games, and Omari Malani’s Life Christian Eagles. Ilwaco went 1-2 in District playoffs.