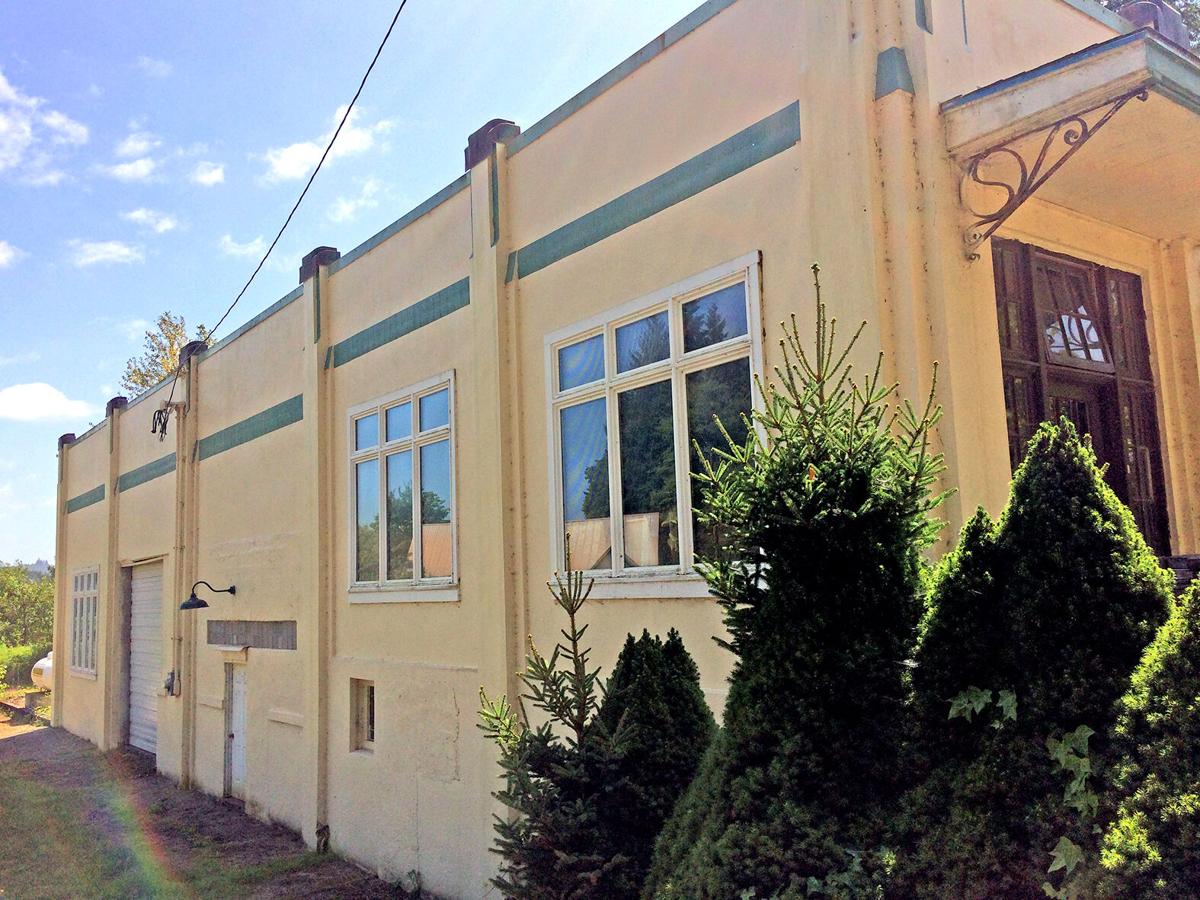 The grandest structure by far in present-day Grays River, Washington is its old creamery building. 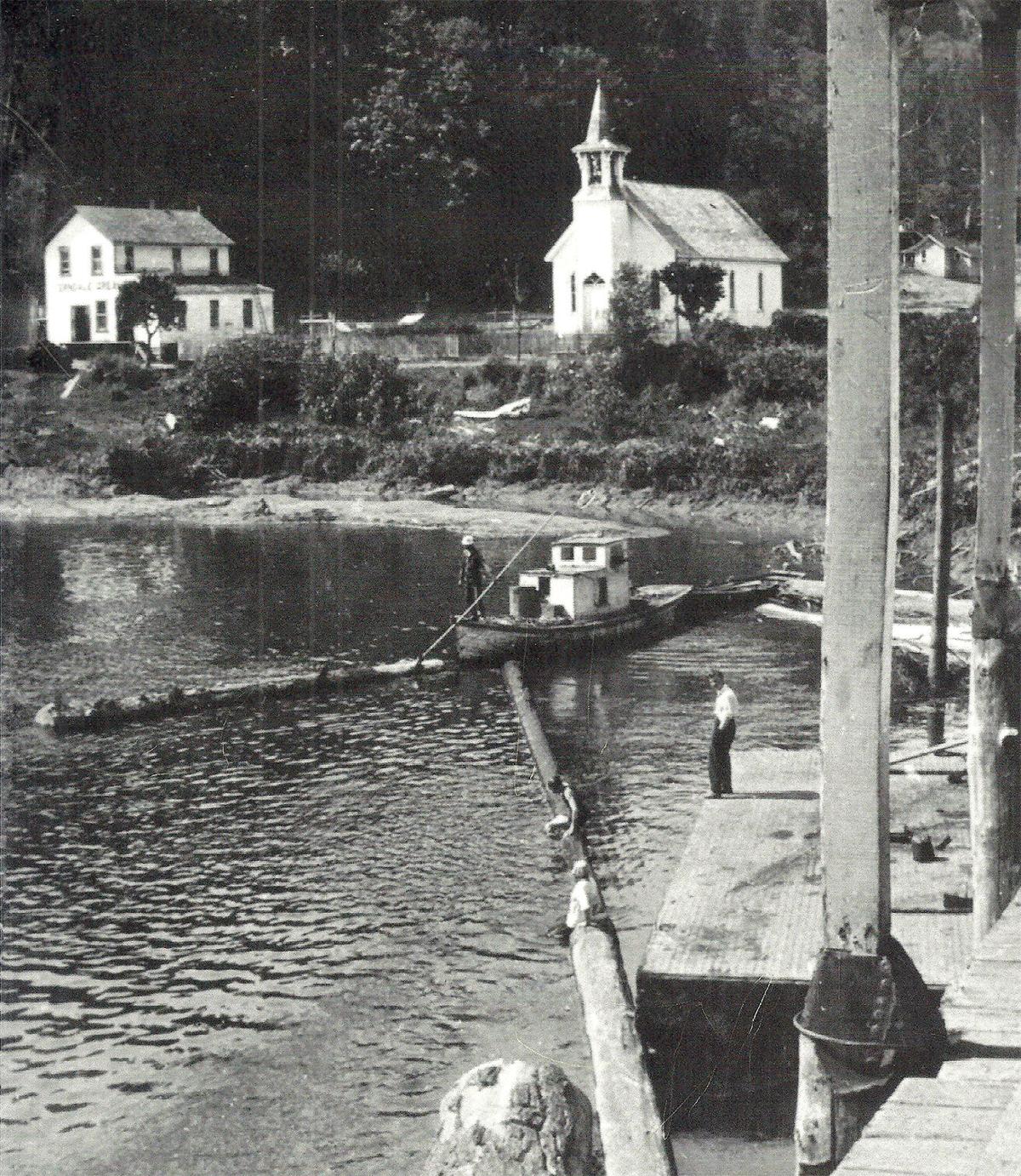 The old wooden, privately owned Ferndale Creamery — the furthest structure on the left — is pictured during a 1914 flood of Grays River. The Methodist Church and the Hayes Walker house are also shown.

Wartime ration tags from the Lower Columbia Co-operative Dairy Association recall a time when milk and other dairy products were a major economic sector around the Columbia estuary counties. A building in Grays River in Wahkiakum County is a notable artifact from that era. 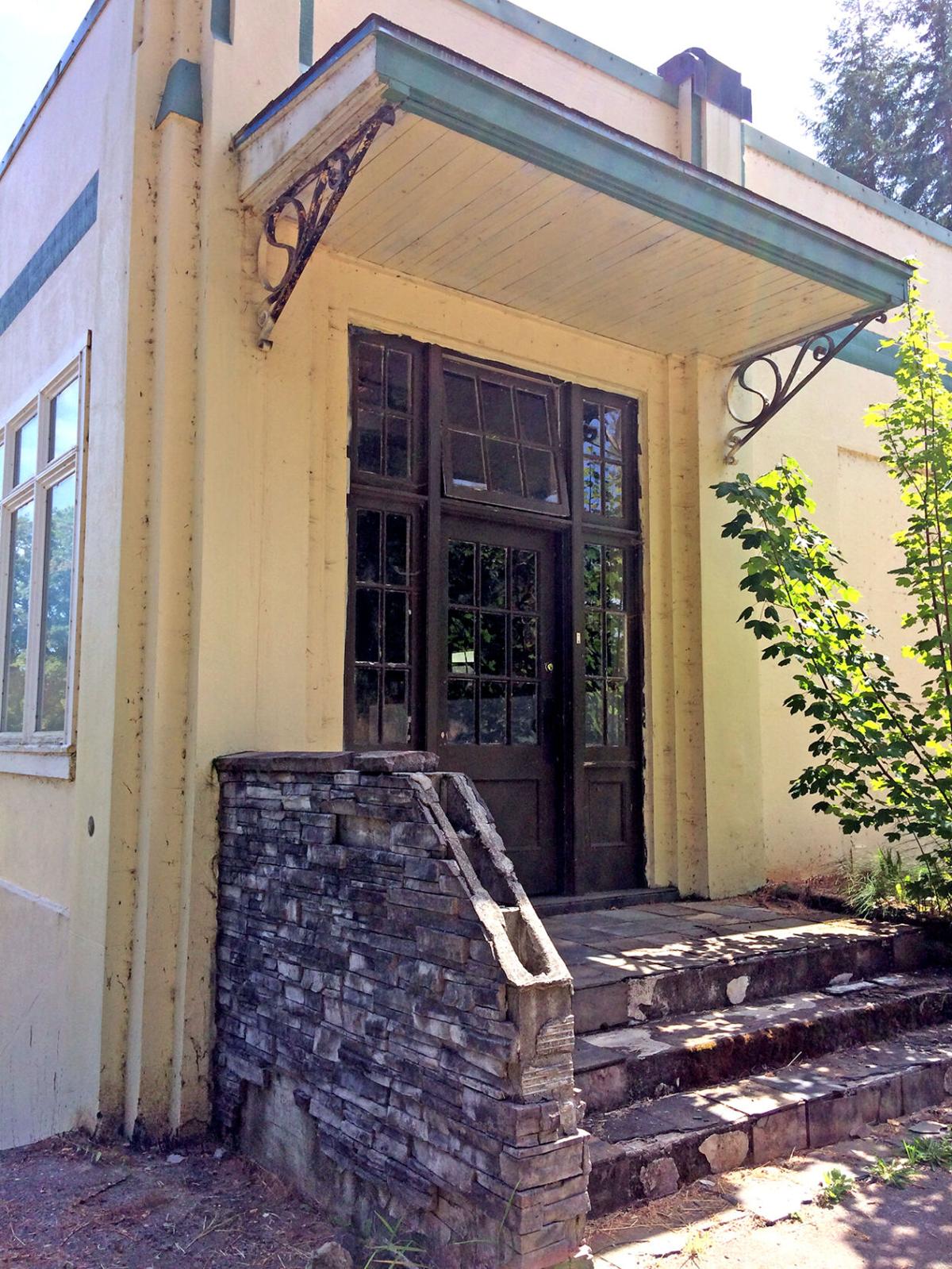 The old creamery’s ornate double doorway, green light fixtures and right-side cargo door are on the west face. The building served as an art gallery in the 1990s. 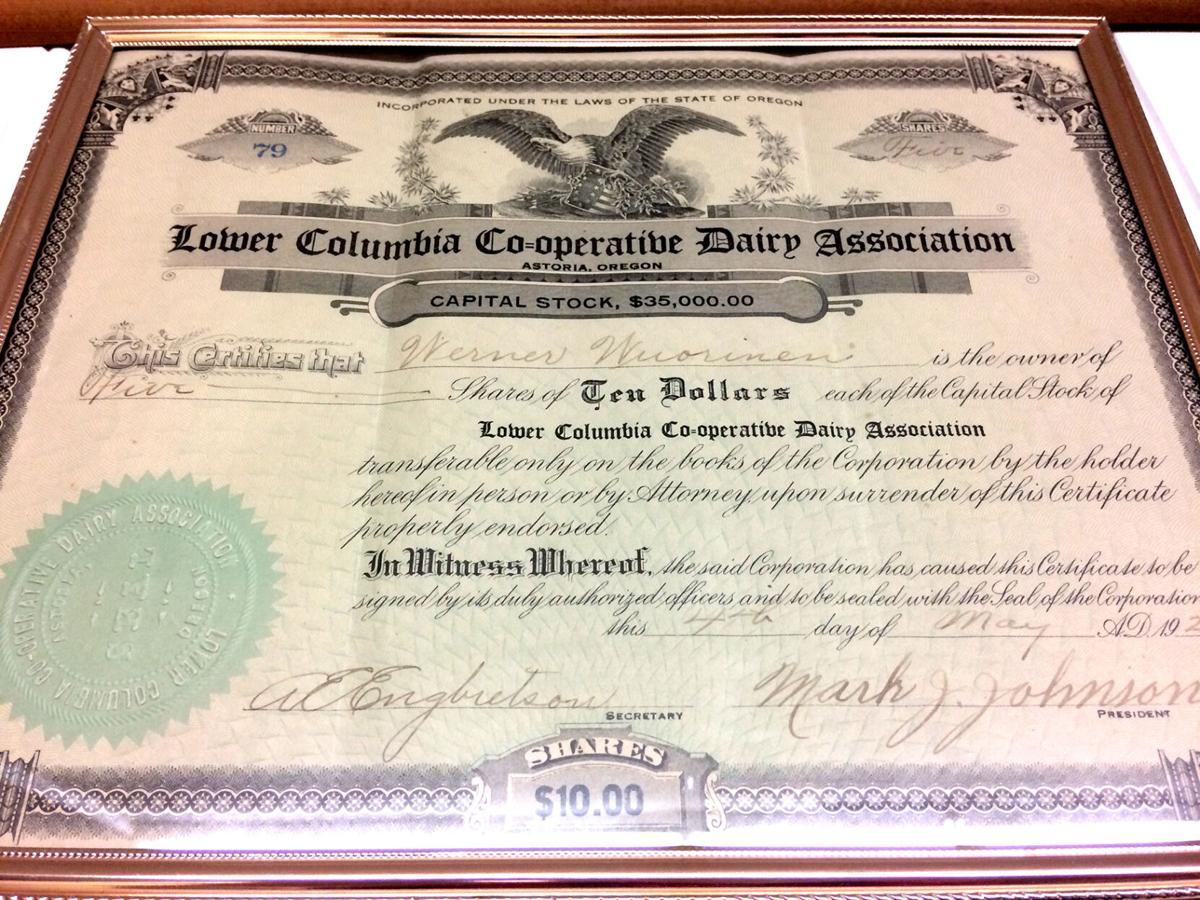 You’ve probably noticed a few buildings near the Astoria waterfront standing around in seeming reproach of passing time.

“Hey, put a roof on me,” cries the Red Building on pilings at the foot of 31st Street. “I was the Uppertown Station Warehouse. I was a red-blooded longshoreman. Pile your nets in me, stomp on my timbers in your slimy boots, wave your net needles and idle up to my pilings with your single-cylinder engines again.”

A nearly paintless hulk on the Lewis and Clark River watches its own reflection pensively. “Now where do they haul out the salmon trollers?”

But on the Washington side of the river, another dark-windowed edifice — the creamery formerly operated by the Lower Columbia Co-operative Dairy Association — seems to muse over sweet, silky-smooth memories.

“A ton,” murmurs the white cement building by the side of State Route 4, Grays River. “A ton of cream.”

Yes, exactly a ton a day was turned into butter in 1932, when Ernest Peterson of the Oregon Journal crossed the river to investigate the phenomenon of a factory-magnitude creamery churning out tons of butter, cheese, and powdered milk in the middle of nowhere.

“Away from a major highway, hours away from a railroad,” marveled Peterson, who may have thrust from Kelso to Grays River as one of the first automobile travelers of the latest, still-gravel section of SR 4.

'When we were milking cows in the ’50s and ’60s the milk truck would pick up our milk cans and deliver them to Astoria, where the Lower Columbia Cooperative Dairy Association was in operation.'

Back when the Red Baron terrorized No Man’s Land, the Ferndale Creamery, an unassuming wooden building that later housed the community’s first telephone exchange, began turning the Grays River valley’s abundant cream into butter, a process revolutionized not long before by the mechanical cream separator. But Grays River farmers, largely Scandinavians who remembered European agricultural co-operatives, began to move for a more profitable enterprise in the early 20s.

“Schmand the Blacksmith,” murmurs the white cement building. “He’d hate to see me like this.”

Co-op gets to milking

Charles C. Schmand traversed the valley with a leather bag of papers, collecting the names of farmers who’d go on board with the scheme of a farmer-owned dairy co-operative. By 1922, the nascent association was selling $10 stock certificates with its own seal. By 1927, the Lower Columbia Co-operative Dairy Association had erected a $75,000 facility in which five men would seal 500 pounds of cheese in paraffin, bag 800 pounds of powdered milk, and nail up 20 boxes of butter a day.

Spouting black coal-oil smoke from its roaring boiler fires, the new creamery building was the efficient-looking, hospital-white design of architect John Wicks, who gave it a regiment of pilasters standing at attention, generous windows to light the operation and pick out any unwelcome speck of dirt, and huge doors on double levels to admit the fifteen thousand pounds of milk and cream trucked in daily from every corner of the Grays River and Naselle River valleys.

“The creamery had ceased creamery operations by the ’40s,” remembers Mary Kandoll Vik. “So when we were milking cows in the ’50s and ’60s the milk truck would pick up our milk cans and deliver them to Astoria, where the Lower Columbia Cooperative Dairy Association was in operation.”

This milk was destined for ice cream, butter and pasteurized drinking milk, sold wholesale and retail in Astoria. The Co-op merged with Mayflower Farms in 1966, which in 1981 merged with the Northwest Dairymen’s Association, under the umbrella of the Darigold franchise, in an atmosphere of ever-broadening consolidation and ever fewer small, local handlers. Where the boiler fires died in Grays River over 70 years ago, today even Astoria’s Darigold Building is a huge hole in the ground at the intersection of 9th and Duane.

Drained of her life-milk since the Truman era, the Grays River Creamery held the Co-op’s feed store for decades.

“Ed Olsen had it in the ’60s,” recalled Catherine, an elderly vendor at the Tuesday Farmer’s Market in Skamokawa. “Jack Smith had the feed store, late seventies or early eighties. He was the last owner of the feed store.” Passing into private ownership, the building went from hand to hand. She stands by SR 4 now in a coat of milky white, said to be hosting jam sessions for her latest owner. Knowing how long it’s been since the sweet white stuff actually clanked through her doors in ten-gallon cans hardly sours the impression: you practically taste milk as you drive by.

Yes, the creamery is one of those reproachful buildings. But sweetly reproachful. Maybe all she asks is a toast in front of your refrigerator tonight. To enterprising blacksmiths, horny-handed valley kids milking the cows before school, highways built by citizen work gangs, and Scandinavians, Americans, or both, raising a grassroots organization that turned the Depression decade into their butter days.

Dr. Fauci warns: 'We are going in the wrong direction'