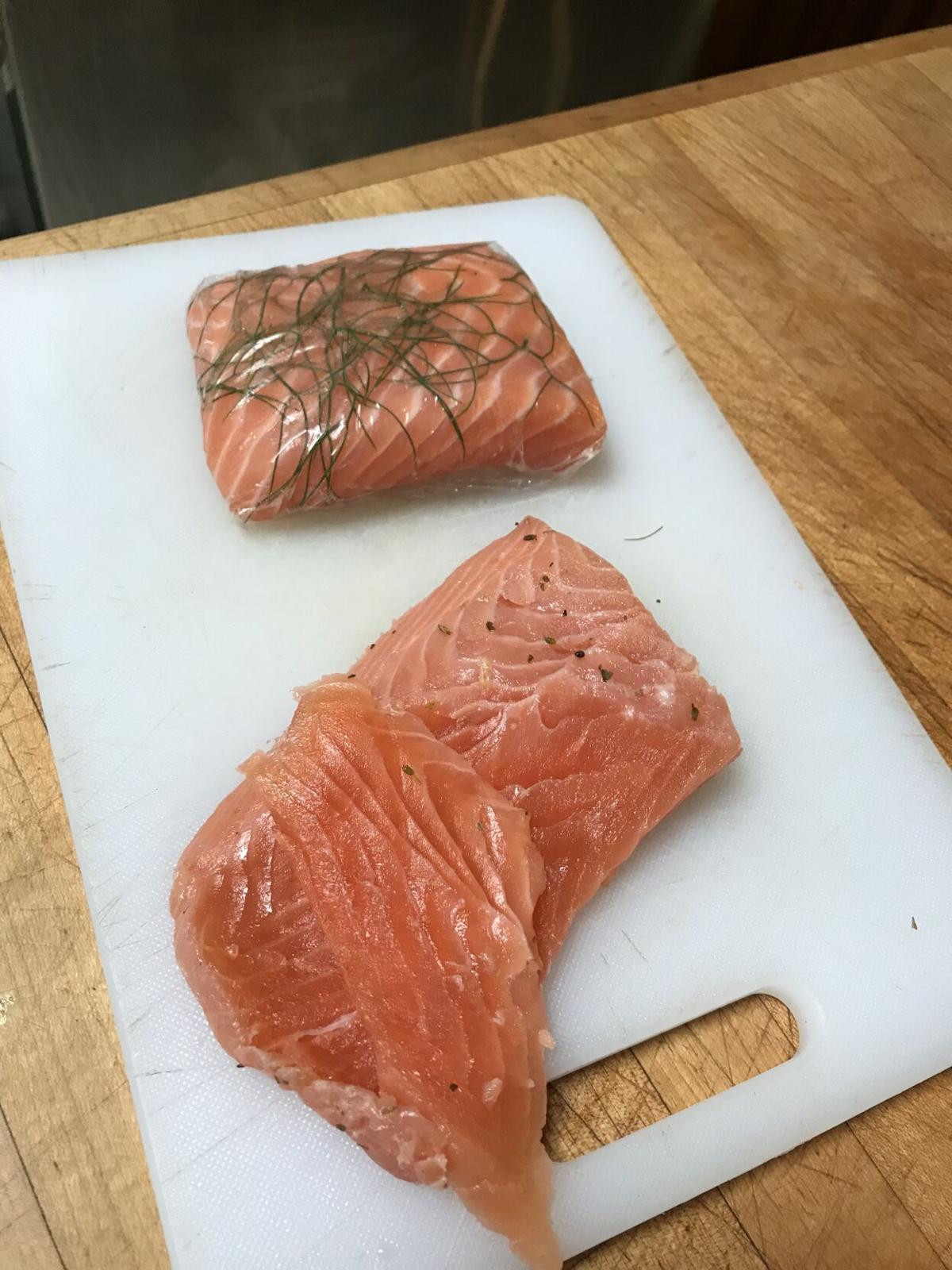 The salmon, while being prepared, can hardly hint at the delicious treat it will become. 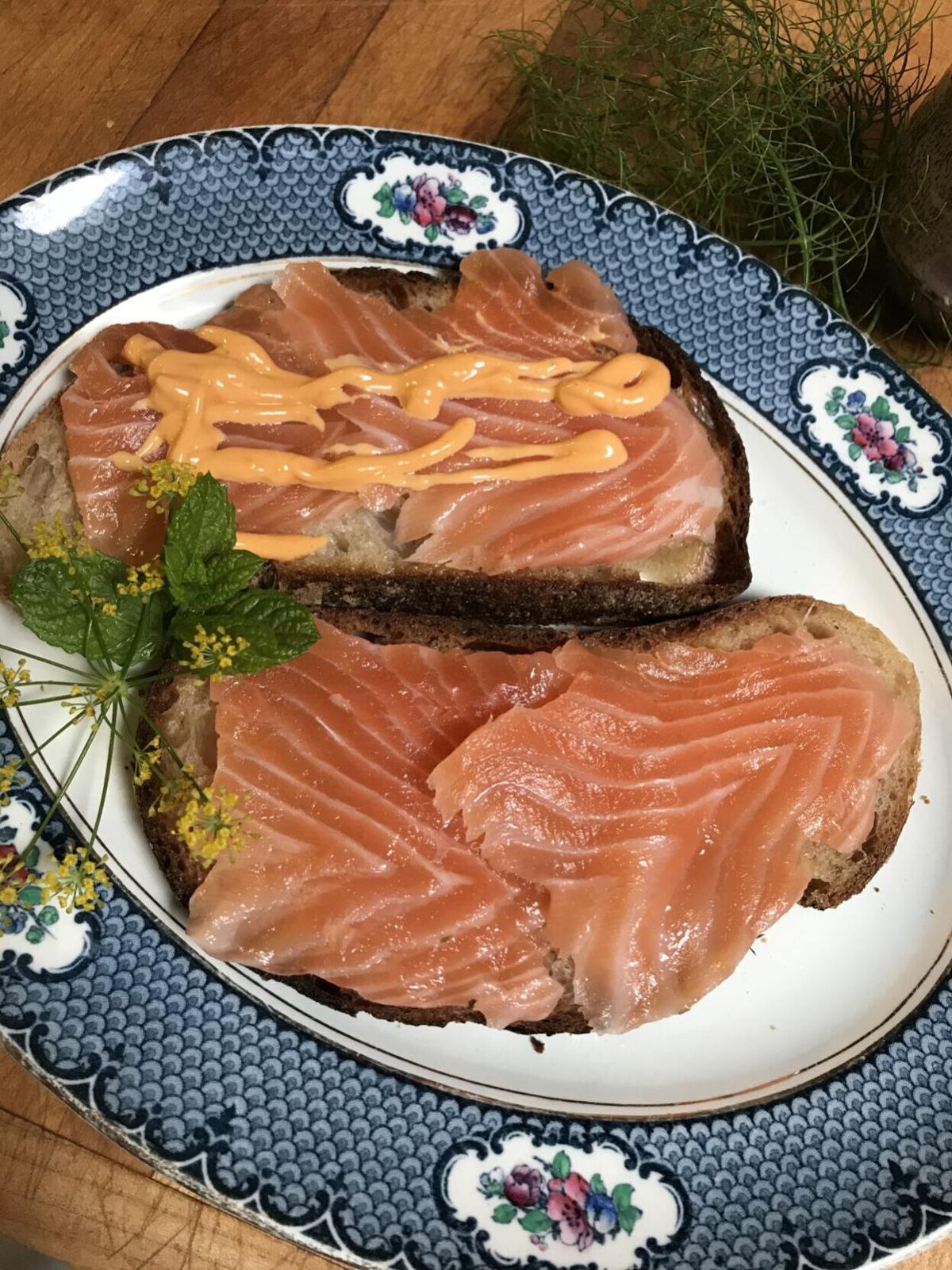 The finished meal is a delicious and memorable epitome of Northwest cuisine.

The salmon, while being prepared, can hardly hint at the delicious treat it will become.

The finished meal is a delicious and memorable epitome of Northwest cuisine.

Salmon is both the historical backbone of our Pacific economy and a talisman of health and happiness.

Native Americans fished the dashing and shimmering species far back into ancient history. Ilwaco, Astoria and other river towns became economic strongholds as gangs of canary workers proceeded this king of fish.

Few proteins are more pleasing to the palette. Generally, salmon is cooked or smoked. But long before White settlers arrived in the Pacific Northwest, other cultures relished rich cured fillets. The preparation is known as lox or gravlax and remains as delicate and tasty as any culinary treat. Of course, I’m expressing my personal bias, but I enjoy a good salmon lox as much as fois gras or caviar.

What follows is a simple recipe handed down in a number of forms over centuries. For years, I bathed the fillets in a salt-sugar brine enhanced with a bit of whiskey or bourbon, then left the fillets to linger for a couple of days in the briny bath.

Washed off, the fillets are sliced paper-thin and served on a fine sourdough, the bread trimmed and toasted in quarter-inch slices. A good quality cracker can suffice. The salmon is also a special treat on an open-faced sandwich with cream cheese.

My friend, Dennis Battles, arrived the other day with a rectangular chunk of salmon that he had cured for 36 hours with sugar, salt, lemon juice and dill. The lox were delicate and the taste subtle and fulfilling.

We sliced the salmon’s flesh thinly with a very sharp fillet knife and served it over my wife Laurie Anderson’s homemade sourdough bread, as big a treat as anything that fits into the mouth.

We wanted the lox to dominate our taste buds. Both of us cut off a thin slab of the salmon and ate it, plain and simple. Here is Dennis’ recipe with one variation: a couple tablespoons of fine scotch whiskey.

Filleting and deboning remain the hardest part of this preparation. Though I prefer troll-caught salmon, a fillet of deboned Atlantic farm salmon makes the job easier. The fillets are high in fat content and cure tenderly. Buy from your local fish monger first, but in lean times, pen-raised salmon is not the worst of alternatives.

Here is the truth: this is so easy. Sprinkle on the sugar and salt, covering the fillet evenly. Lay the salmon on an open square of plastic wrap and cover with the lemon juice, whiskey and dill. Fold the plastic over and around the fish. Don’t allow leaks. Place in a glass bowl and weigh it down with any flat clean object that presses the salmon evenly, about two pounds in weight.

Refrigerate for 36 hours, open, wash and dry off the fillet. Slice as thinly as you can and eat away.

This treat is generally served as an appetizer. Served with a crisp garden salad and a steaming bowl of chowder or fish stew, it remains a lovely accompaniment. You may wish to serve several other appetizers with the lox, a delicate buffet of sorts.

Dry white wine is the perfect trailer. On a hot day in the fall, one can sit outside and soak in the last of the fine weather and this sublime offering.

David Lett of Eyrie vineyards fame told me once that Oregon Pinot Noir was a salmon match made in heaven. Like the fish, the wine is a bit oily with a stern viscosity, and dry. You might even consider a second bottle, switching to a fumé blanc, just to stay open-minded. Lett was almost always right! So celebrate in these trying times.