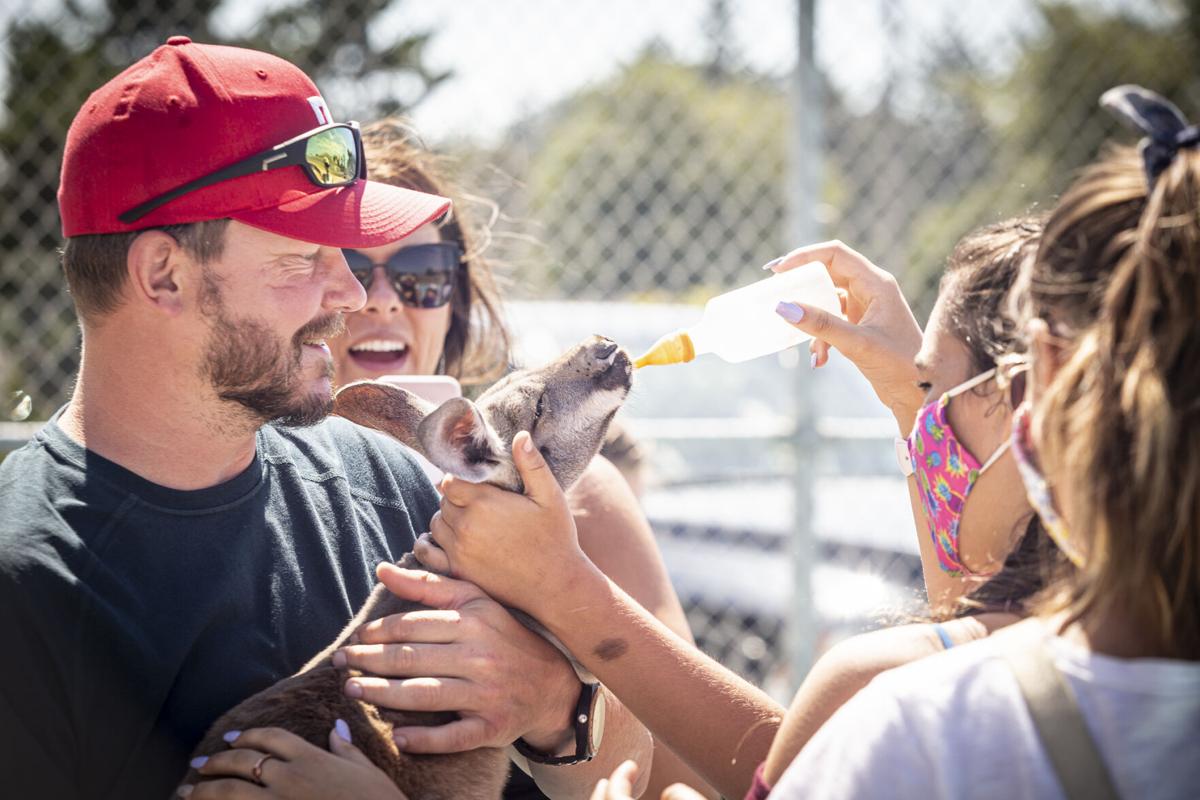 A man holds Hope the kangaroo as others feed her on Aug. 16 in Ocean Park. 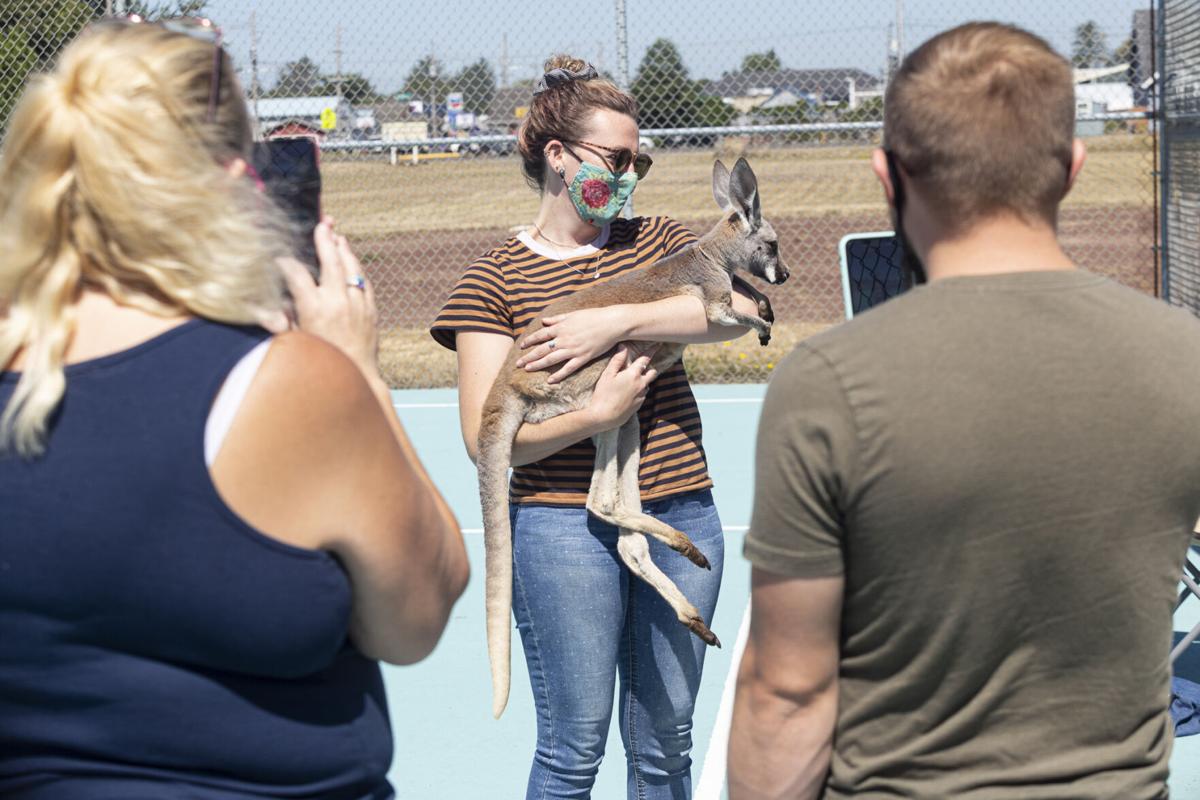 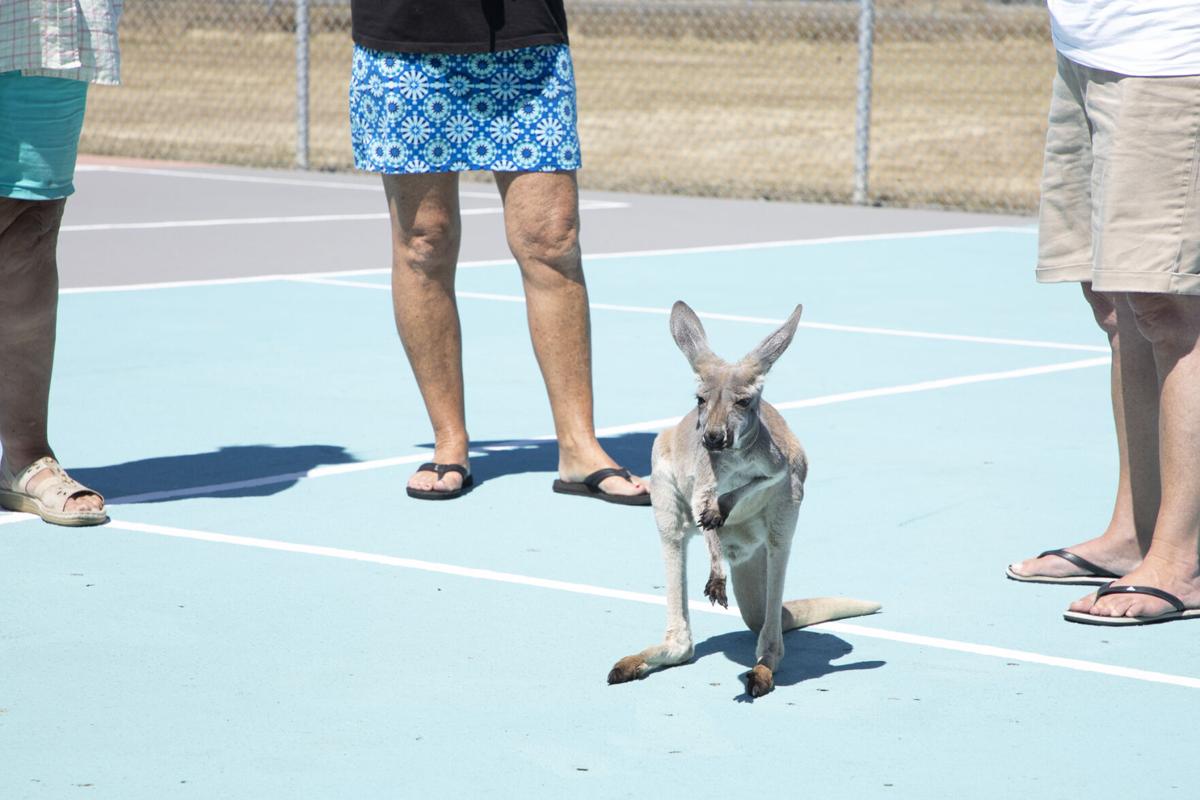 Hope tends to draw a crowd any time a public appearance in made. Fans can now follow her Facebook page called 'Hope My Kangaroo'. 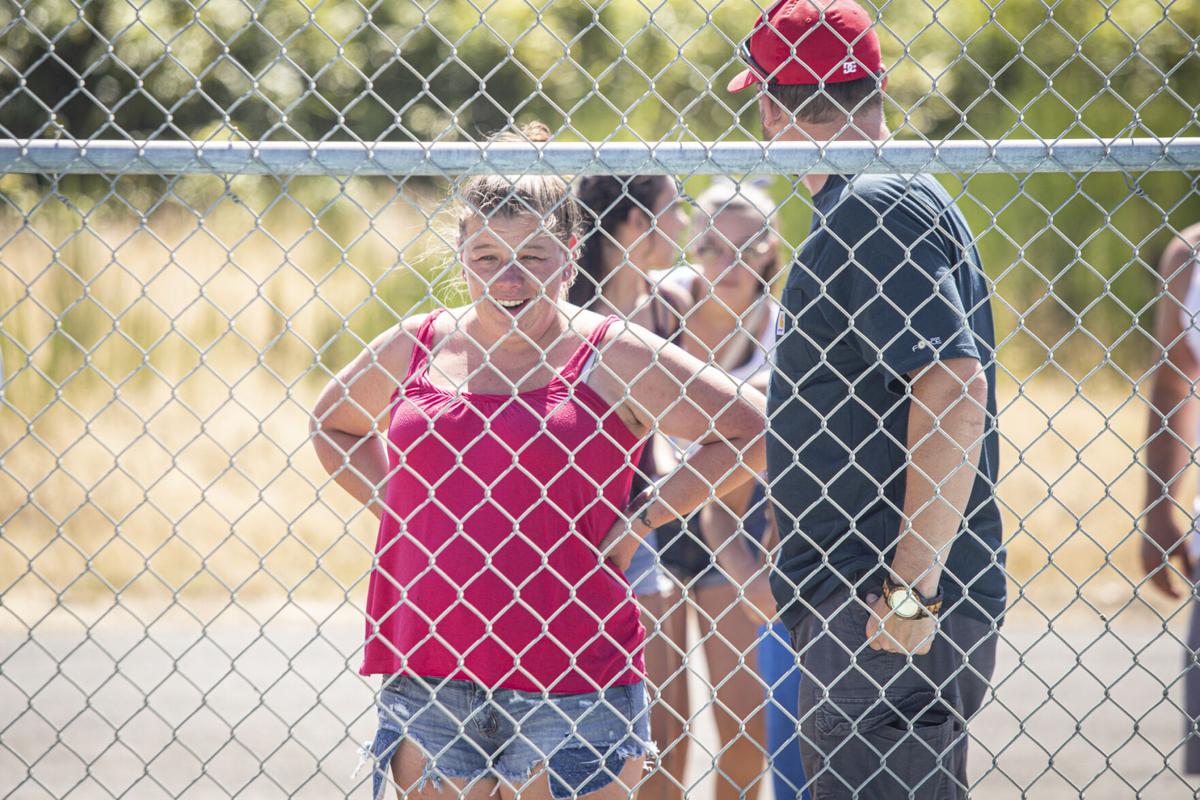 A woman watches in awe at the site of a kangaroo inside inside the Ocean Park pickleball court. 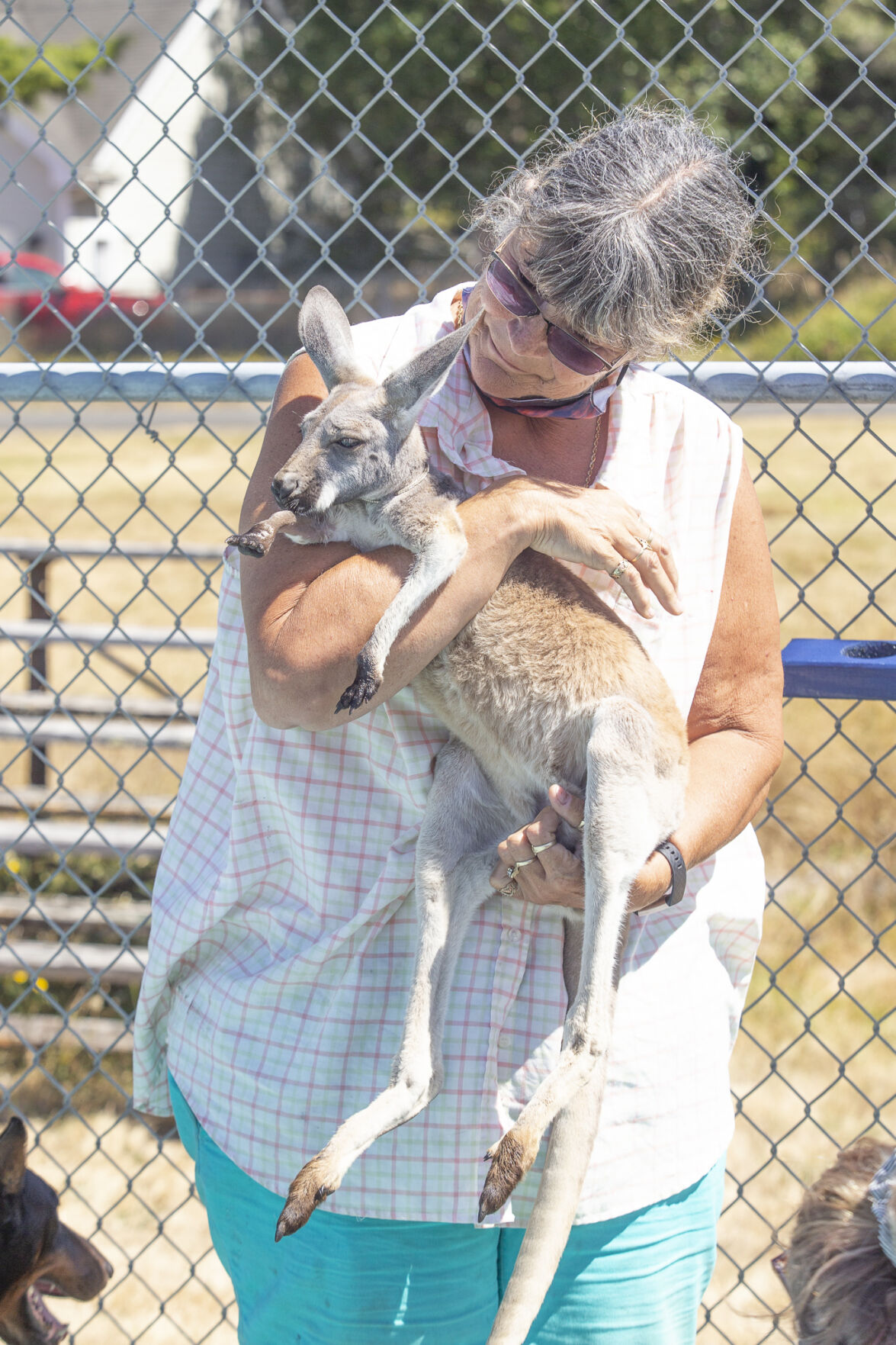 Christine Dobratz holds her 8-month-old kangaroo Hope while demonstrating the location of the pouch. Dobratz formerly operated an exotic animal petting zoo in Kelso for years. 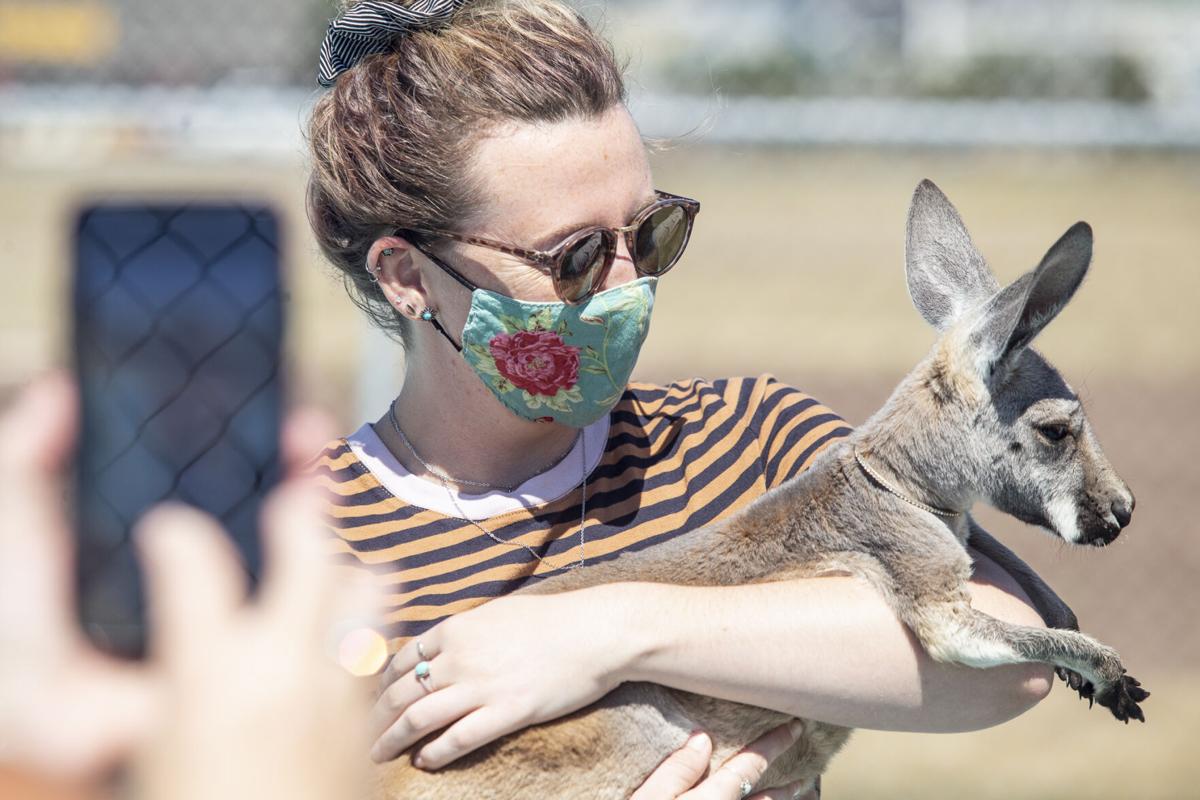 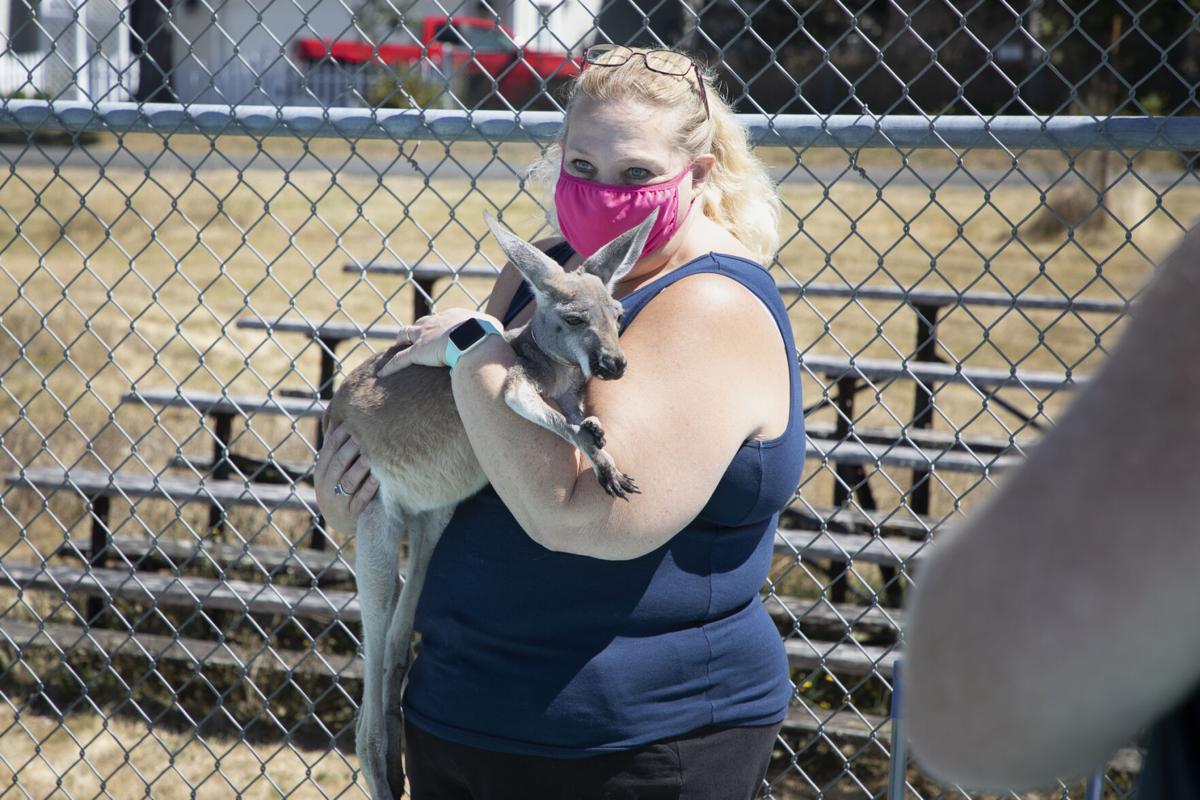 Susan Erager holds Hope for a photo on Sunday, Aug. 16 in Ocean Park. 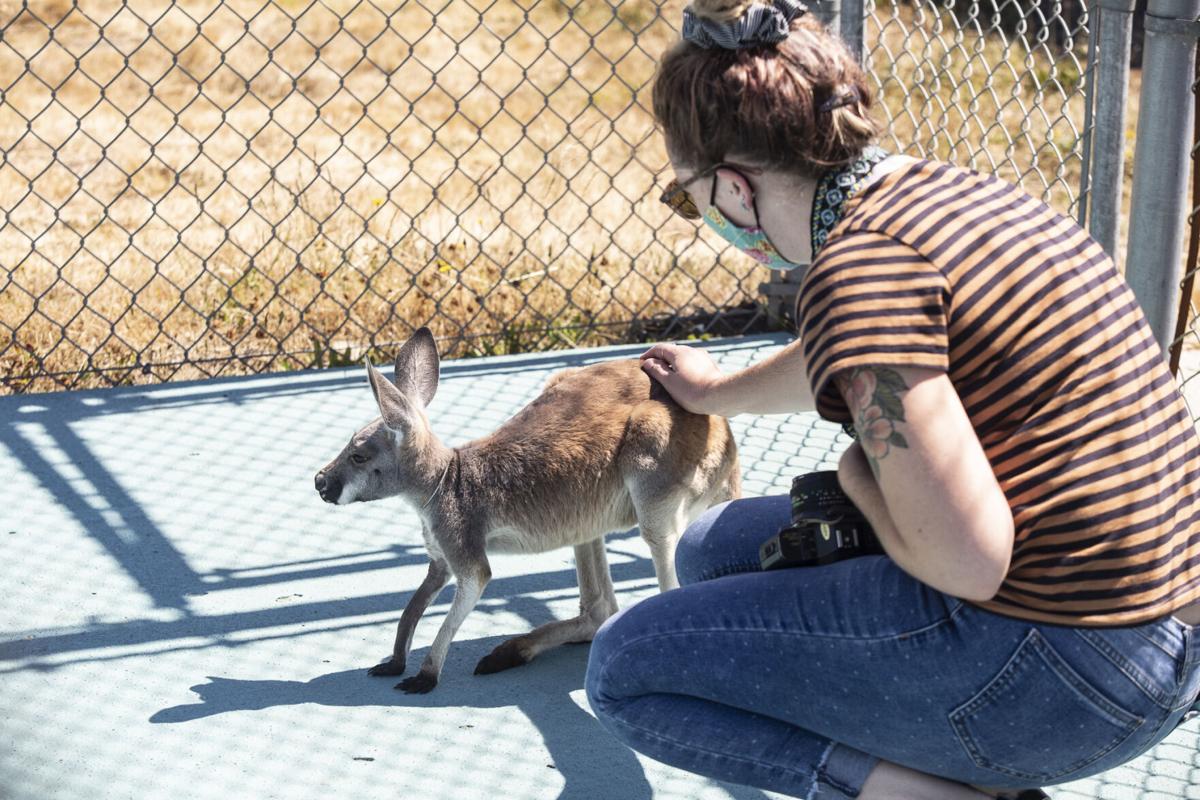 April Rohrback pets Hope. Rohrback was surprised by how soft the fur was. 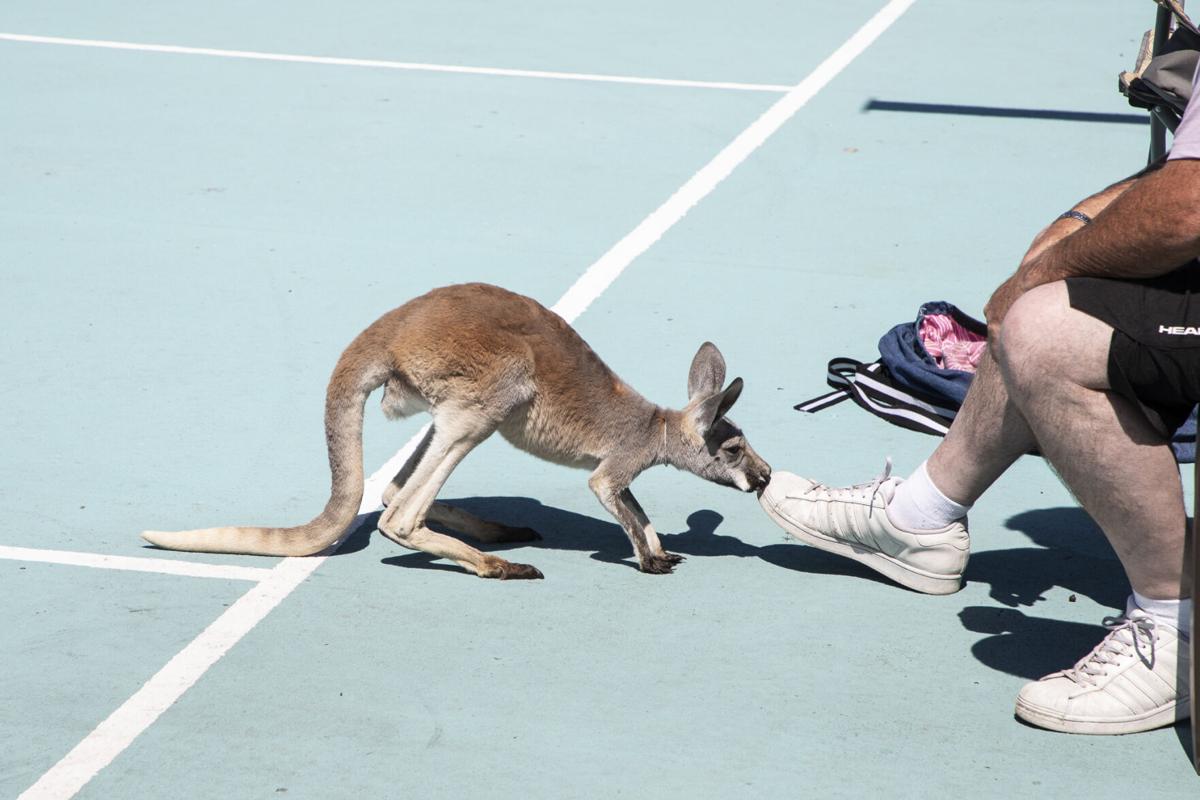 Hope appeared equally curious about those coming to see her. 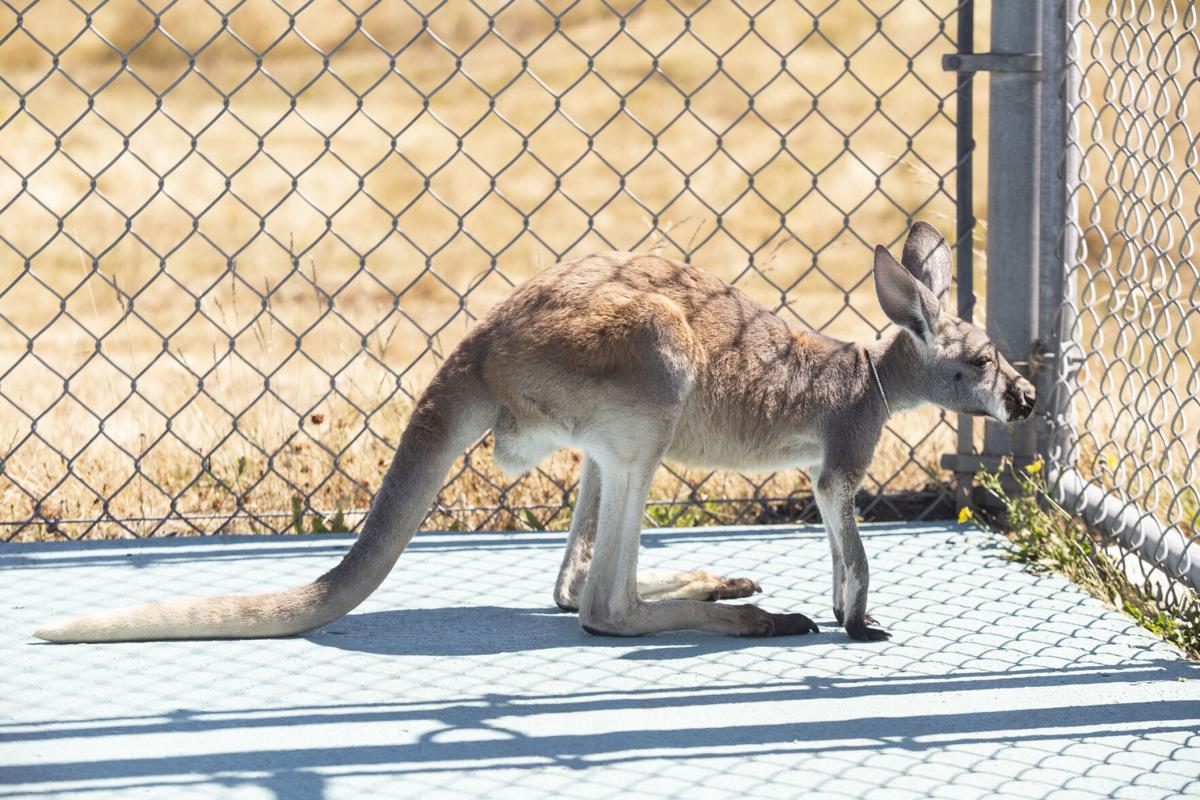 Kangaroos have a captive lifespan of about 15 to 20 years, Dobratz said. 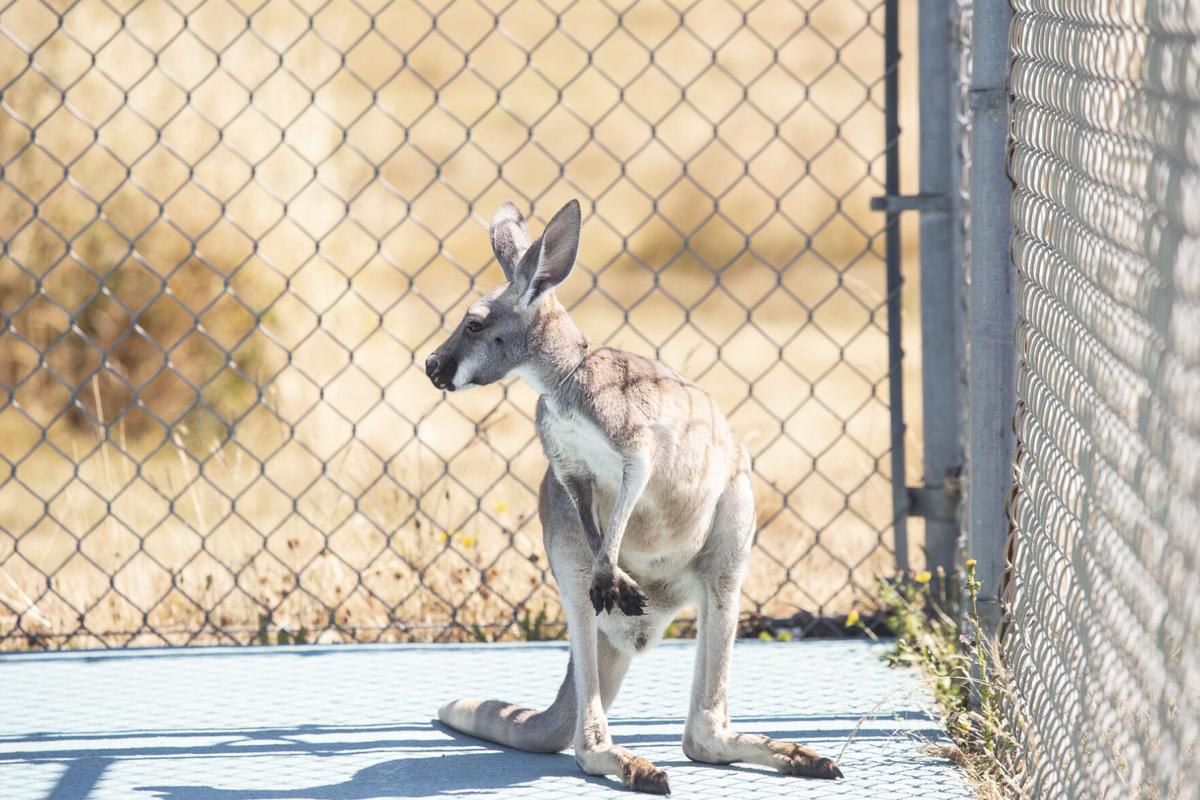 Hope is 8 months old and weighs 15 pounds, but will grow to four feet and about 80 pounds, Dobratz said. 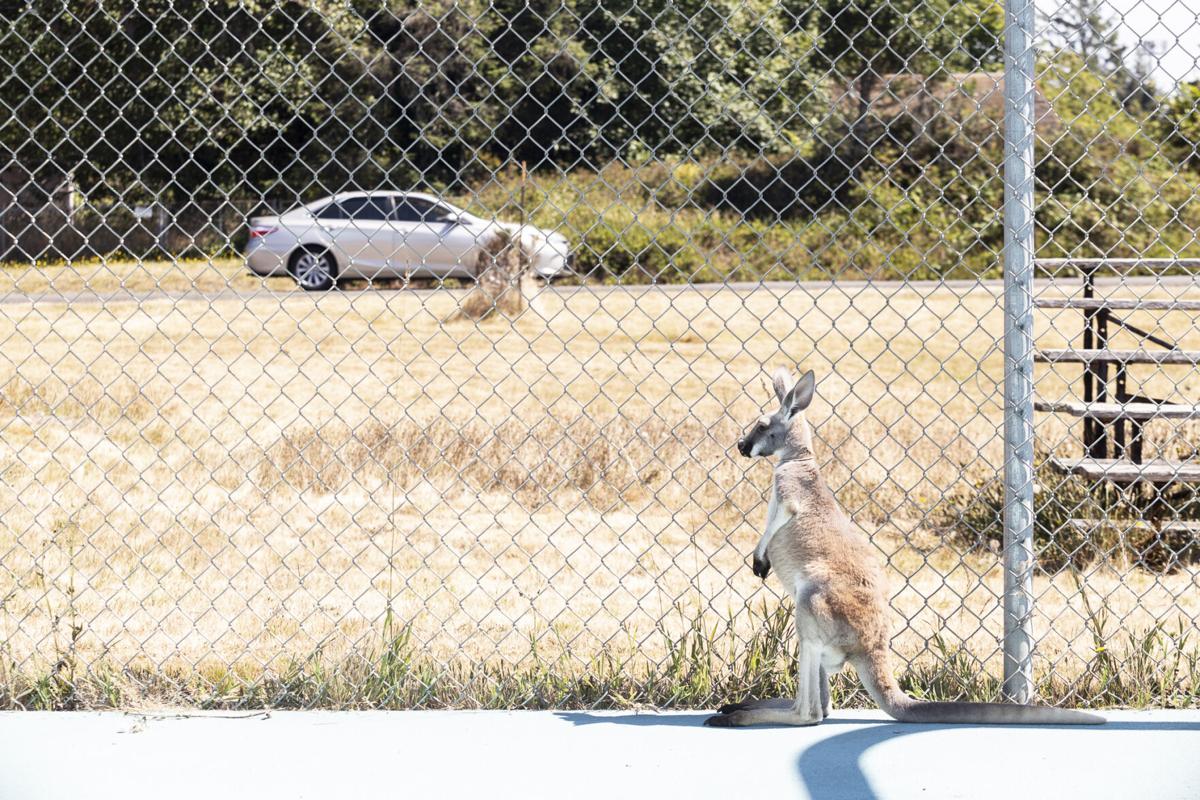 Hope draws a lot of visitors and puzzled looks while playing inside the Ocean Park pickleball court, where her owner occasionally brings her during trips to the beach. 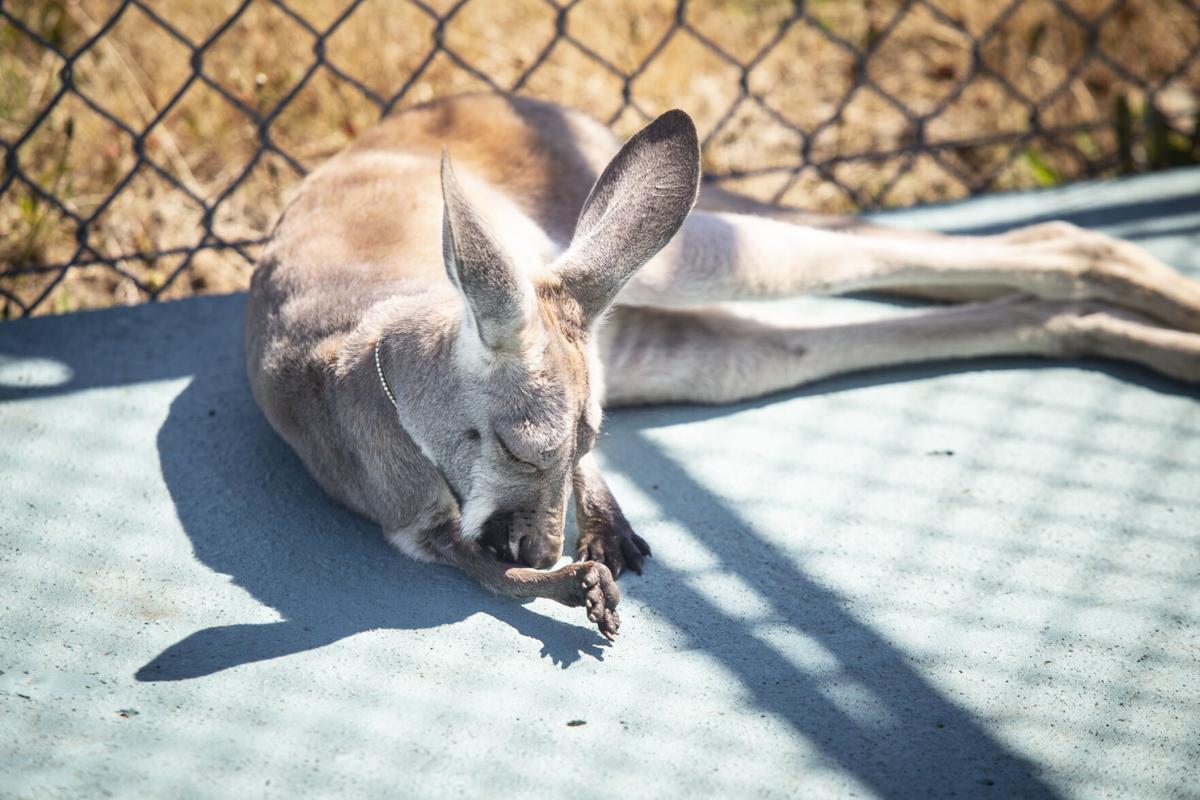 Hope rests inside the Ocean Park pickleball court in between visitors. 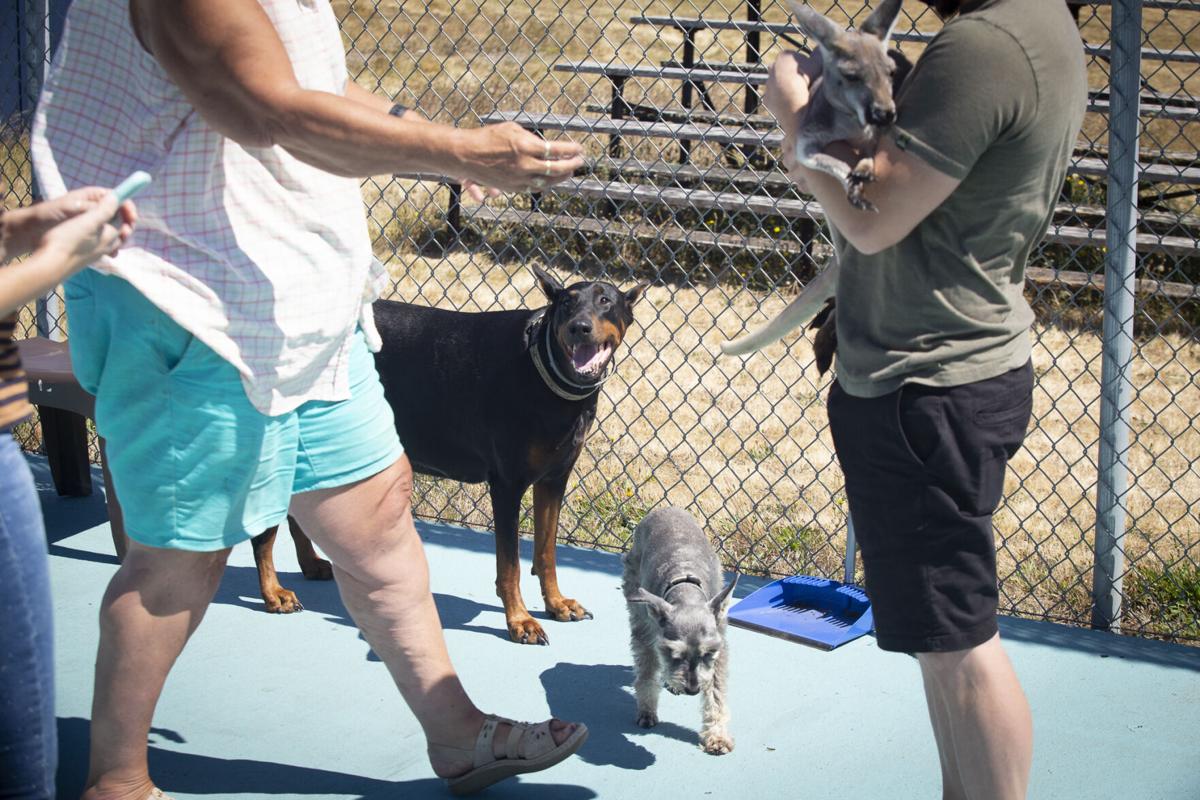 Dobratz’s other pets were slightly jealous of all the attention paid to Hope. 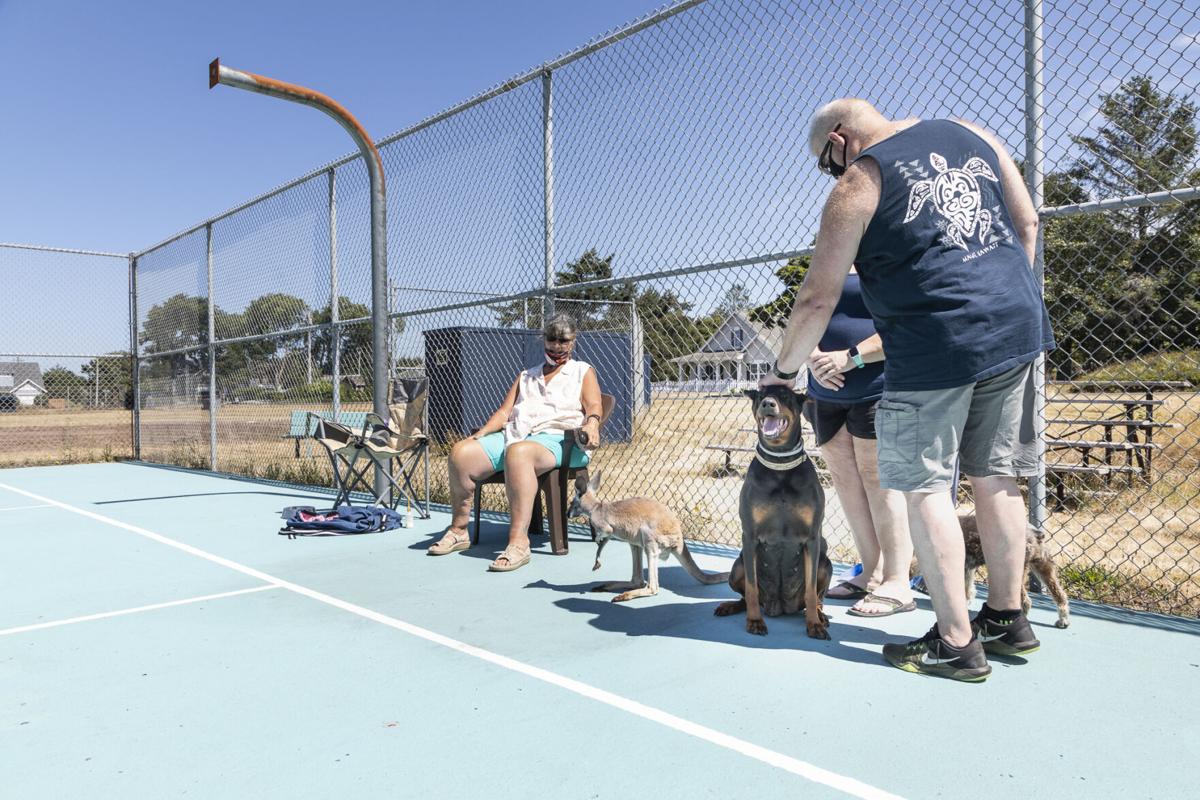 After fawning over Hope the dogs received some much-deserved attention from visitors.

A group gathers around Hope the kangaroo on Aug. 16 in Ocean Park. Owner Christine Dobratz, far left, is used to the curiosity her pet kangaroo generates. “I enjoy sharing her, especially with the kids. I just love the kid’s expressions and the ‘oh my gods,’ from adults,” she said.

A man holds Hope the kangaroo as others feed her on Aug. 16 in Ocean Park.

Hope tends to draw a crowd any time a public appearance in made. Fans can now follow her Facebook page called 'Hope My Kangaroo'.

A woman watches in awe at the site of a kangaroo inside inside the Ocean Park pickleball court.

Susan Erager holds Hope for a photo on Sunday, Aug. 16 in Ocean Park.

April Rohrback pets Hope. Rohrback was surprised by how soft the fur was.

Hope draws a lot of visitors and puzzled looks while playing inside the Ocean Park pickleball court, where her owner occasionally brings her during trips to the beach.

After fawning over Hope the dogs received some much-deserved attention from visitors.

LONG BEACH PENINSULA — The grownups gasped and the kids whispered excitedly at the sight before them.

“Oh my god” “What is that?” “Is that what I think it is?” they murmured as they pressed against the chain-link fence at the Ocean Park pickleball court and peered inside.

The excitement was all about Hope, an 8-month-old pet kangaroo owned by Christine Dobratz. In Hope’s short existence, the 15-pound marsupial has become a minor celebrity during weekend excursions from Kelso to the Long Beach Peninsula.

“I enjoy sharing her, especially with kids. I just love kids’ expressions and the ‘Oh my god’ from the adults,” Drobatz said on Sunday, Aug. 16, her most recent excursion.

'“I enjoy sharing her, especially with kids. I just love kids' expressions and the ‘Oh my god’ from the adults.'

Dobratz, 63, of Kelso, formerly owned and operated Wolf Howl-O Exotic Petting Zoo, once home to more than 40 wolves and dozens of other exotic pets in the early 2000s.

“We had everything from a cougar to fallow deer to kudamundi,” Dobratz said. While operating the petting zoo Dobratz learned about a wide variety of animals and realized how cuddly some can be.

“We used to raise wallabies at that time and I learned how affectionate and loving they were — just gentle creatures,” Dobratz said. “They passed of old age and I missed that affection from a wild, exotic animal.”

Dobratz acquired Hope in March, when she was just four months and weighed only pounds, joining another kangaroo at home. But she has since downsized her assortment of exotic or wild animals, many of which she’s rehabilitated or re-homed, she said.

Dobratz often takes Hope outside while she’s working, but owning a kangaroo isn’t as easy or glamorous as it sounds. Cleaning up droppings around the house and laundering urine-stained clothing is common.

“When she has to pee she jumps up on me, so I put a little diaper underneath her. She drops her little rabbit-like pellets everywhere. She eats macropod grain I have to special order,” she said.

Simply put, Dobratz hasn’t had success housebreaking a kangaroo. But she’s never had any issues with her dogs and marisupials interacting — only a mild competition for a spot on her lap.

“Hope sleeps on top and eats with them,” Dobratz said. “She will jump on my lap and lay for hours. She’s very attached to me. If I got out of her sight now she would panic. Typically, they stay in mom’s pouch off and on until they’re about a year old. They have a lifespan of 15 to 20 years in captivity. She’ll get about 4 feet tall and about 80 pounds. The males get at least six feet tall. They never stop growing, but they slow down when they’re about three or four.”

And the most difficult part of raising kangaroos?

“They’re just so easy,” Dobratz said. “Eventually, she’s going to have to move outside. They have a heated hut. Right now that’s my toughest decision.”

The sheer affection is the most surprising part of raising wallabies and kangaroos, according to Dobratz.

“It’s really unique how loving and affectionate they are — and who would have thought, a kangaroo? I’ve never ran across a wild animal that can show a human what true love and affection is. And I missed that. So I got a kangaroo, and sure enough they were just as affectionate if not more (than wallabies).”

It’s illegal to own a kangaroo as a pet in a majority of the U.S. Laws regarding adopting exotic animals vary state to state, with only West Virginia and South Carolina allowing people to raise kangaroos without a permit, while remaining illegal in Oregon and 37 other states. In 11 states, including Washington, kangaroo ownership is permitted, and one can be purchased for a few thousand dollars.

The Outback Kangaroo farm in Arlington, Washington, roughly 50 miles north of Seattle in northern Snohomish County, offers guided tours to view a variety of exotic animals from lemurs to Nigerian dwarf goats, while also asking on their website: “Are you ready to add a kangaroo to your life?”

The kangaroo farm was Dobratz’s first stop in what would become a cross-country trip to acquire Hope, her third kangaroo.

Though relatively expensive, she feels the ease which people can buy a kangaroo is both good and bad.

“It’s good news and bad news. It’s good news for me, but it’s bad news because anyone can go out and buy one with no regulations or stipulations. And they’re not for everybody, of course. You need a lot of land, proper fencing and knowledge,” explained Dobratz, who lacks an official wildlife rehabilitation license but has decades of experience raising and rehabilitating exotic animals.

Next, she plans to fly to North Carolina to pick up a Maine coon kitten.

Over the years, Dobratz’s animal acquisitions garnered the attention state wildlife officials, which led to a unique partnership.

“Fish and Wildlife has been out and they liked what they had seen. For the first time in the state’s history, they gave confiscated animals to a private party. They gave us three bobcat kittens that were confiscated from an illegal breeder,” Dobratz said.

The Washington Department of Fish and Wildlife handles native species and manages exotic animals brought into the state. It gives permits for wildlife to be kept for research and education, but not as pets, according to WDFW.

“I had to get them spayed neutered and micro-chipped, as well as use them for education,” Dobratz said.

Today, the bobcats are more than 10 years old and still prosper under Dobratz’s care.

While the bobcats were a smooth success, not all wild animals are equally as easy. There was one animal Dobratz considered more challenging than the rest.

“We had 200-pound cougar. We had him since he was a kitten. I called it our unplanned pregnancy because we were kind of forced into it. But when I saw it there was no turning around. He was legal. He was 16 when he passed of old age. Even with kangaroos, you can’t take the exotic out of them. You can’t trust them 100%.”

While affectionate, Dobratz cautions that wild and exotic animals, including kangaroos, are not suitable for everyone.

“I’ve been around exotics all my life and they’re just not for everybody,” Dobratz emphasized.

Best-selling album from the year you graduated high school

'Vast majority' of Tulsa's record COVID-19 hospitalizations are from outside city, officials say