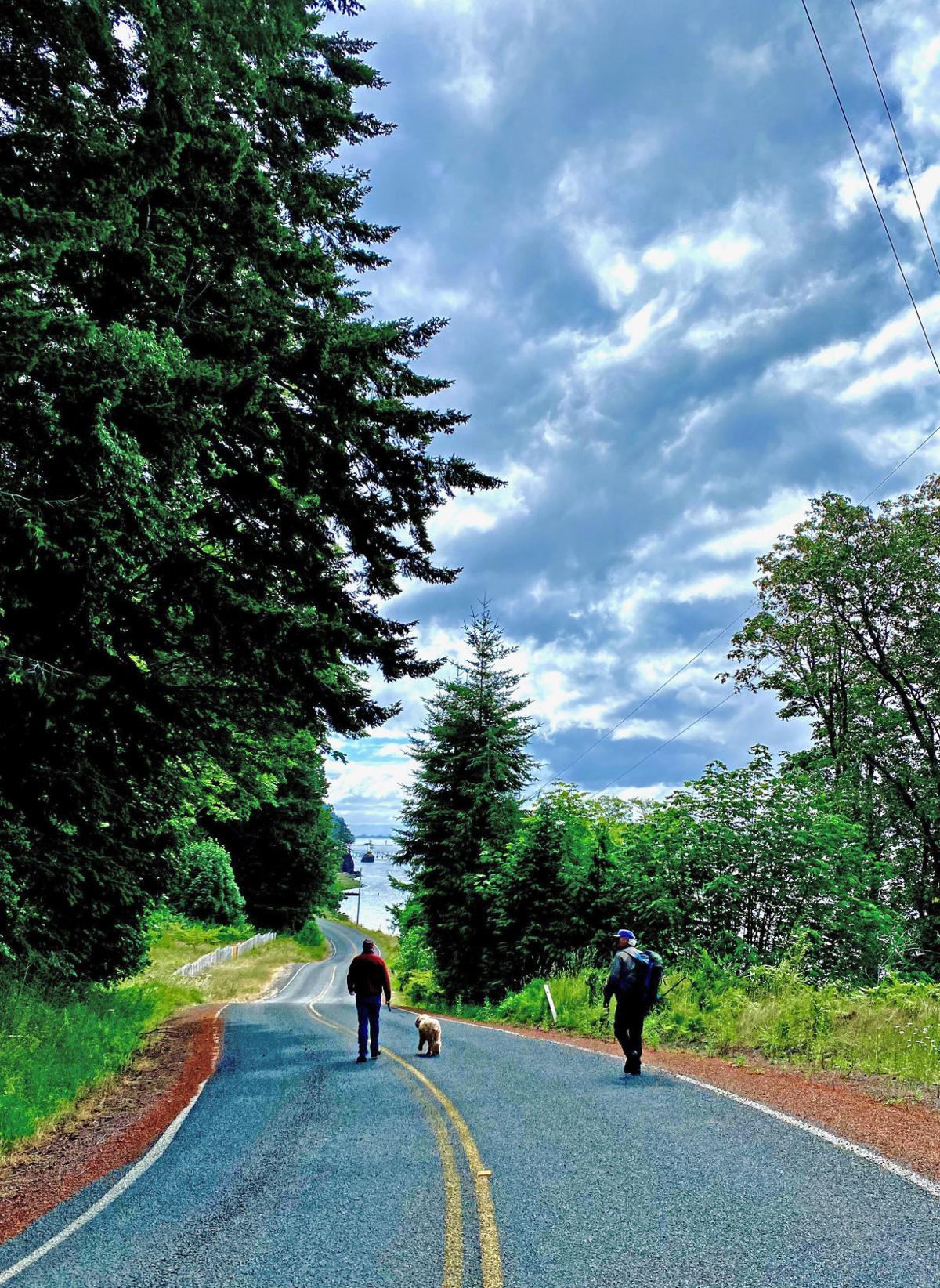 Matt Winters, left, his dog Duncan and cousin Bob Bell hike along scenic Altoona-Pillar Rock Road on the north side of the Columbia River northeast of Astoria. 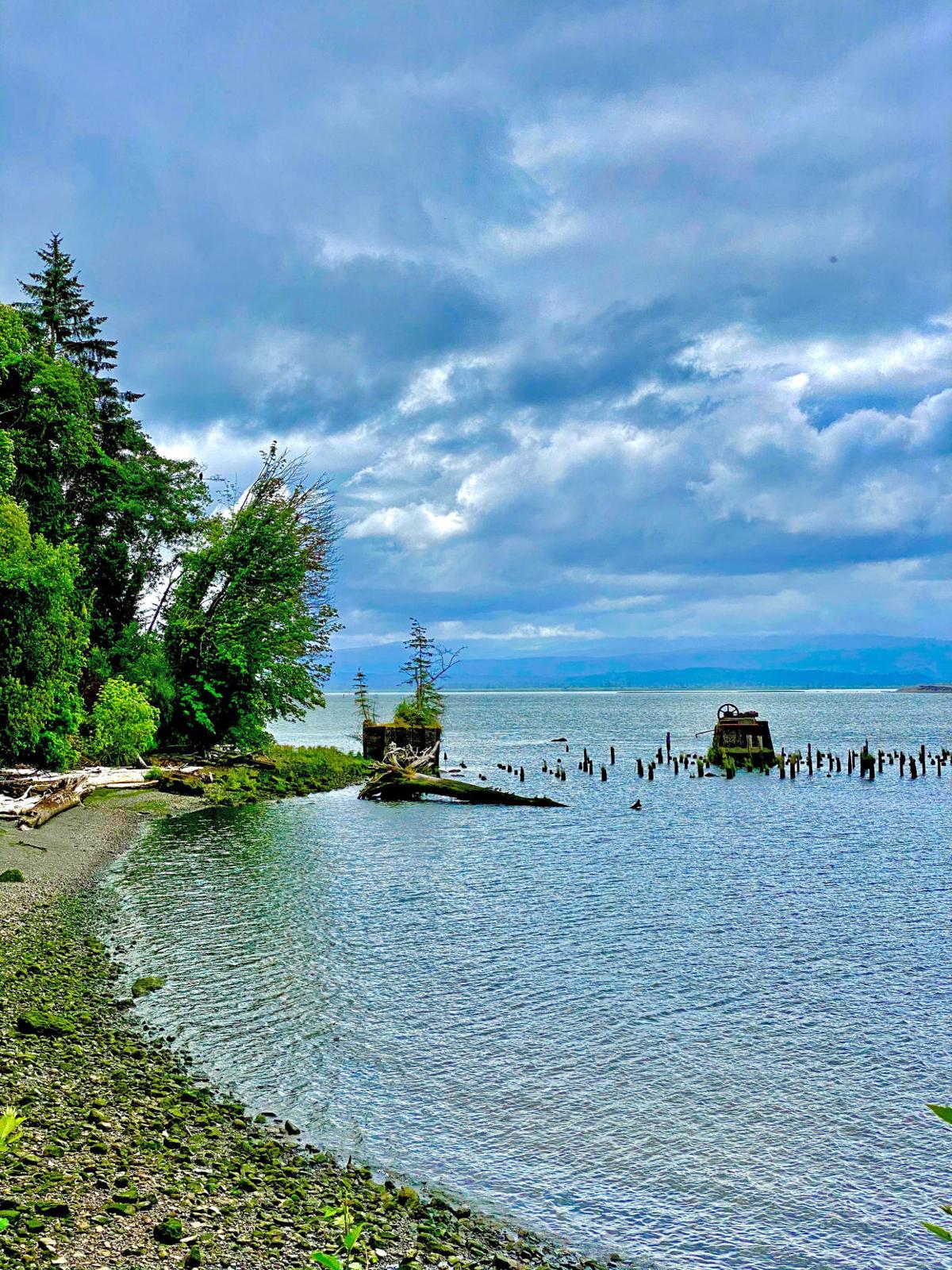 Small remnants of industrial machinery are all that survive from the Klevenhusen salmon packing plant at Altoona in western Wahkiakum County. The German-American firm packed salmon in barrels for export to Germany. 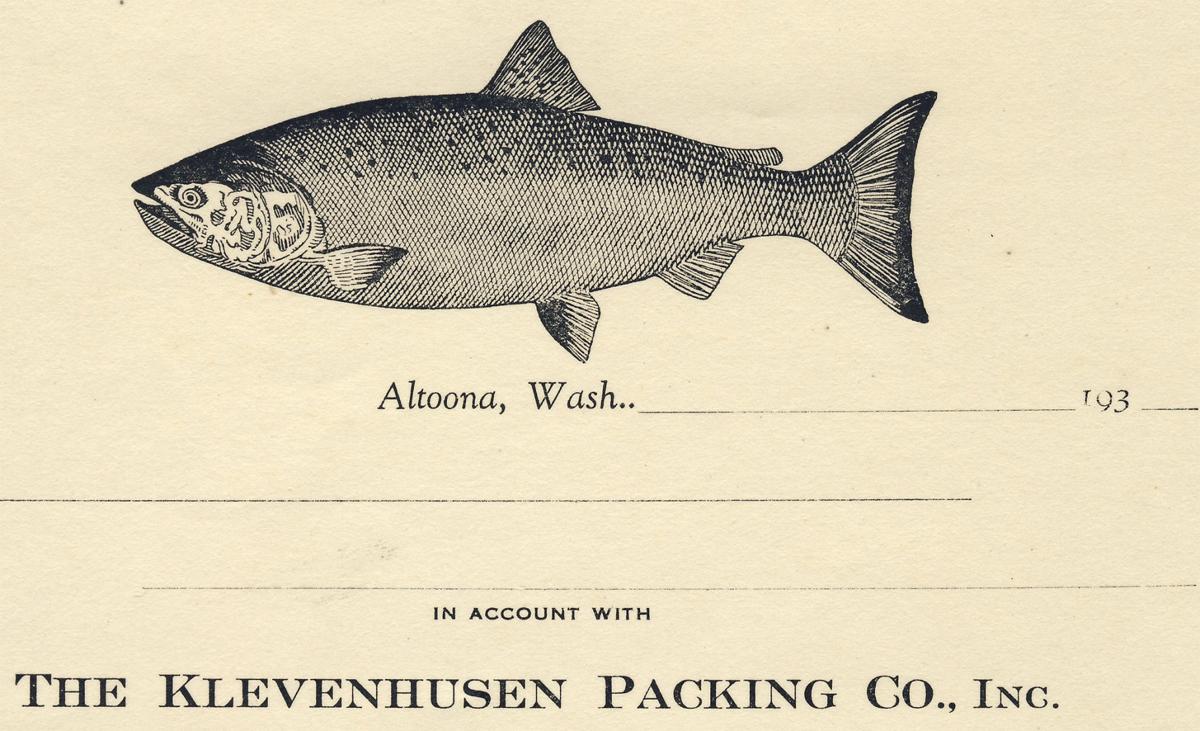 Klevenhusen was one of several firm that processed Columbia River salmon at facilities along what is now Altoona-Pillar Rock Road, a remote and highly scenic route. 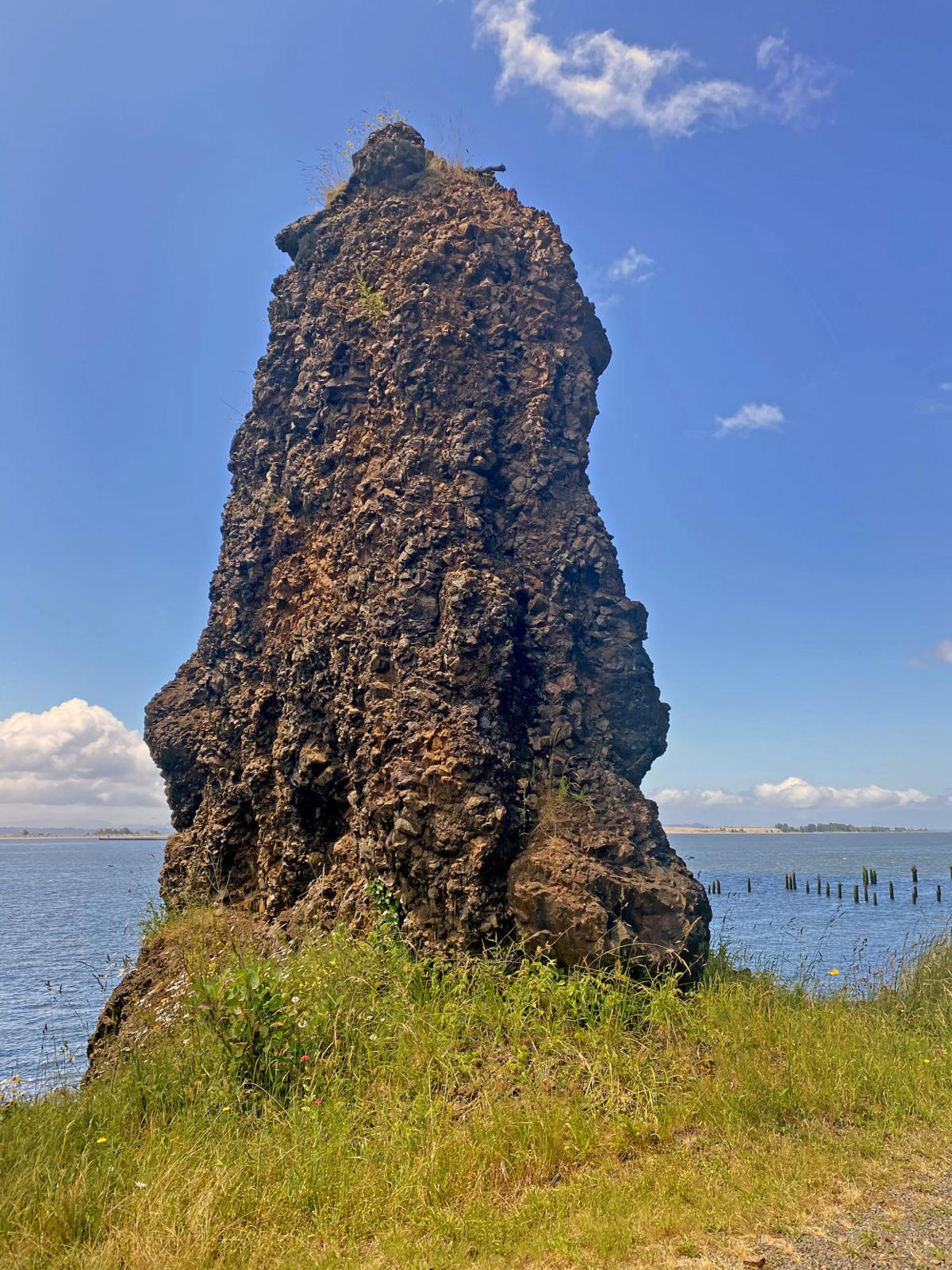 A conglomeration of rocks form a sort of gatepost near the old Columbia River fishing village of Cottardi Station just west of Altoona. 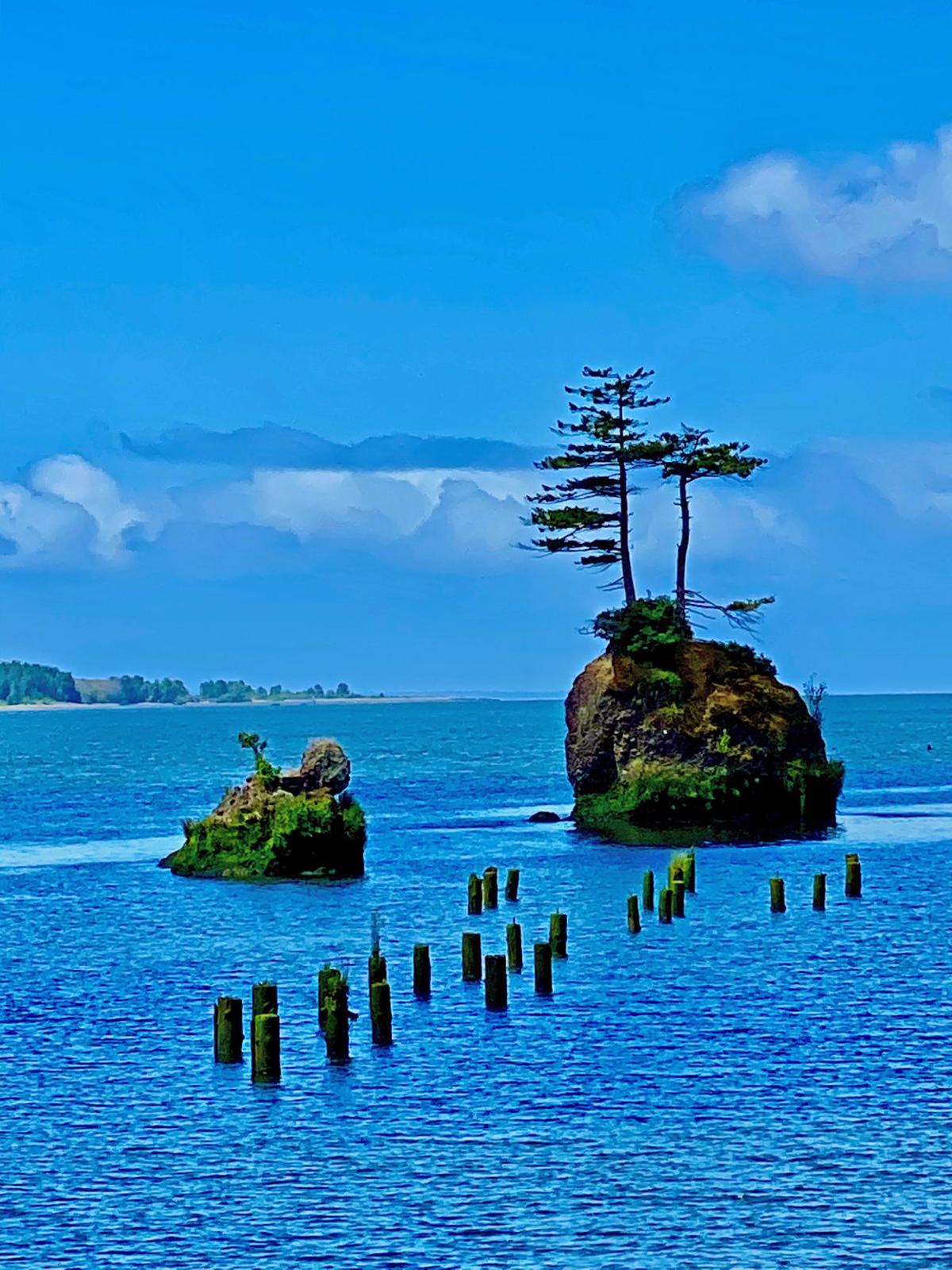 Tiny rocky isles poke up along the Columbia’s north shore in Wahkiakum County. Pillar Rock — a similar geological feature several miles upriver from these — was the vicinity from which Lewis and Clark first could make out the tall breaking surf above the Columbia River bar, signaling that they were near their destination. 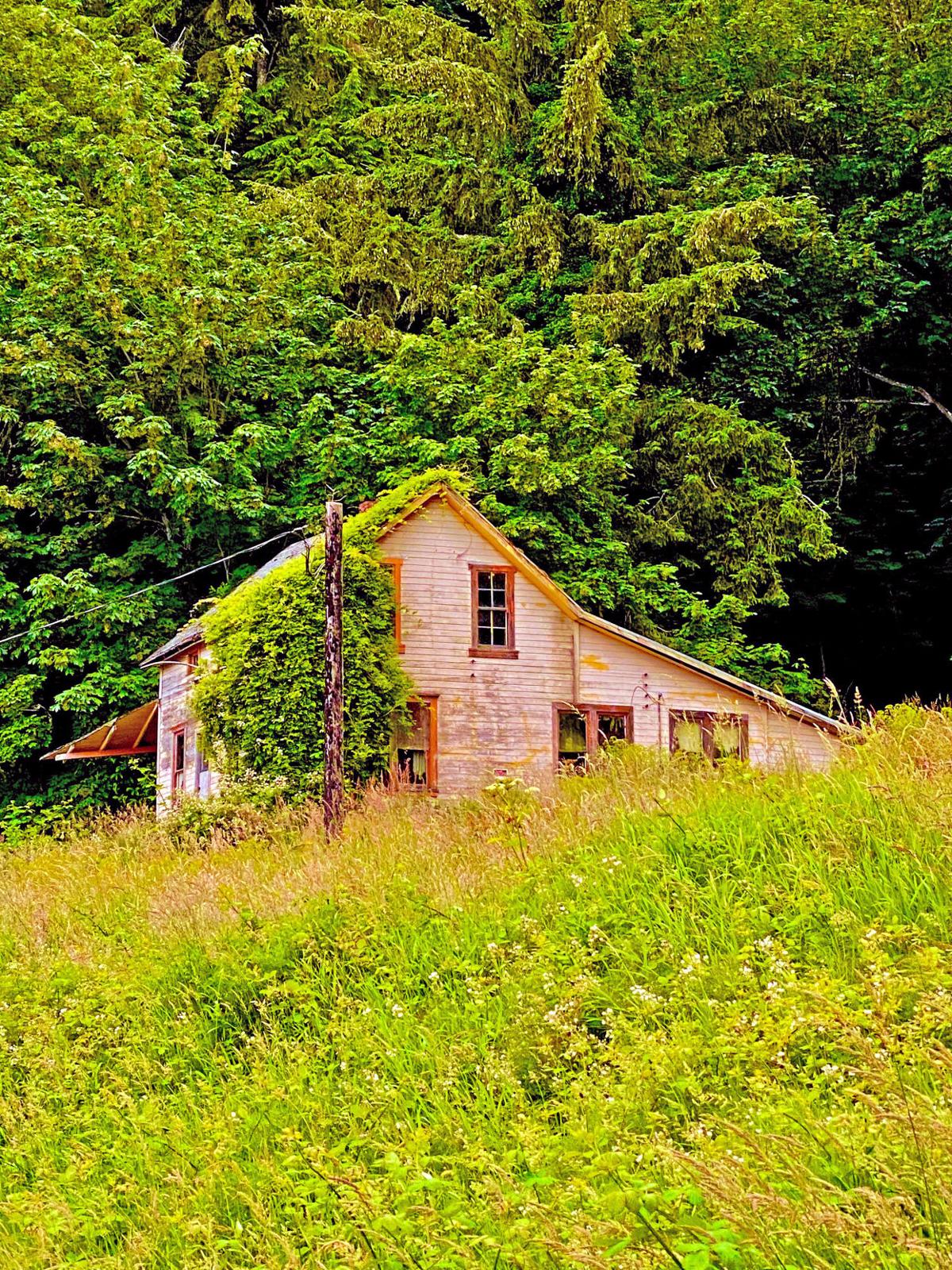 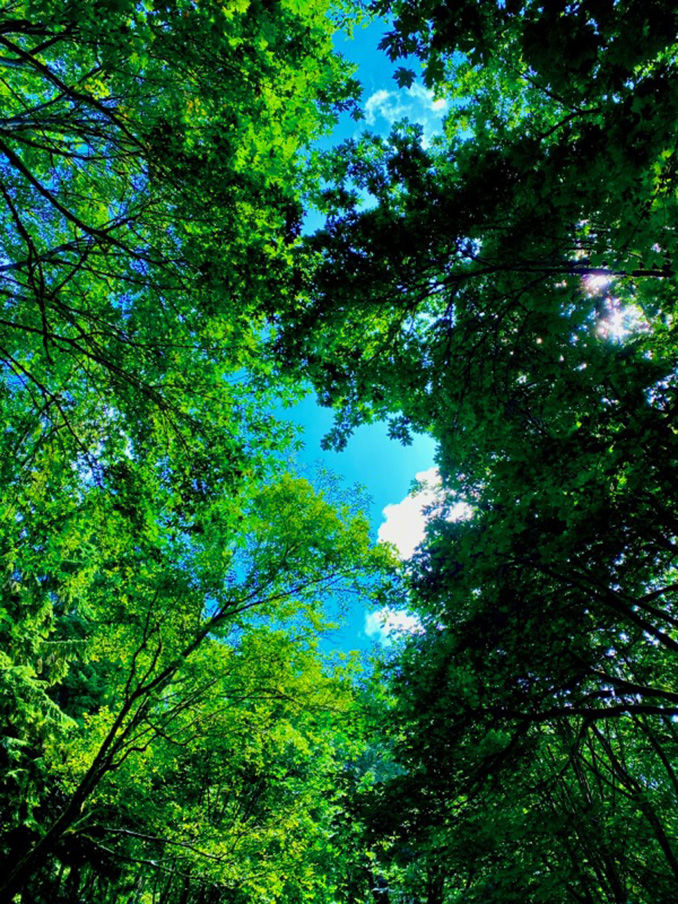 Sunshine filters down through a canopy of maple and alder leaves in the area of Dalia on the Columbia River’s remote north shore.

Matt Winters, left, his dog Duncan and cousin Bob Bell hike along scenic Altoona-Pillar Rock Road on the north side of the Columbia River northeast of Astoria.

Klevenhusen was one of several firm that processed Columbia River salmon at facilities along what is now Altoona-Pillar Rock Road, a remote and highly scenic route.

A conglomeration of rocks form a sort of gatepost near the old Columbia River fishing village of Cottardi Station just west of Altoona.

Early morning. A light mist hugs the seashore, floods easterly over our garden and then our front yard. Welcome to late June on the Long Beach Peninsula. Welcome to a gray land. Matt and his cousin Bob Bell pick me up at 8:30. We are headed out for our weekly walk. For two months now, we have hugged the shoreline at Benson Beach, a lovely scenic paradise lodged behind the North Jetty at Cape Disappointment State Park. For six of those weeks, the beach was deserted, no tourists, no masks. With the “Opening,” things changed. Not necessarily in a bad way, but from our point of view, not really the best outcome, either. We’ve been spoiled, plain and simple. It is just that this trio of modern day Robinson Crusoes covet our privacy. The beach was ours, ours alone, one of the few benefits of the restrictions surrounding the pandemic.

If you want to go

Altoona-Pillar Rock Road starts at Rosburg at the junction of State Route 4 in Western Wahkiakum County between Naselle and Cathlamet. The country store at Rosburg sells basic picnic supplies — call 360-465-2223 to check on availability of pizza and other goodies. After winding through forests and farmland for about five miles, the road emerges on the north shore of Grays Bay and the Columbia River. Little traveled, it's generally safe to walk along the roadway while listening for vehicles. Nearly all the riverbank and surrounding property is privately owned; please respect boundaries. The road dead-ends at the historic Pillar Rock salmon cannery, where a vacation rental is available. The cannery is not open to the general public without specific invitation.

Lots of people now, but still a stunning sanctuary: ocean, pelicans and eagles, the largest collection of shapely driftlogs darn near anywhere. Sea lions frolicking in the surf. A lighthouse that millions have snapped with every known camera, way back to Wayne O’Neil. You remember Wayne, the resolute editor behind the Chinook Observer from the 1960s into the ‘80s. He recognized natural beauty and captured it for countless postcards. Simply put: This landscape is stunning.

Today we are headed to Altoona, the once proud salmon town on the Columbia River, nearly deserted except for a smattering of houses that muscle into the steep green hillsides that rise above the big river. In front of many of these homes are rows of pilings, cemented against the wily currents like neglected sets of decaying teeth. For a while in May 1792 in adjoining Grays Bay, Capt. Robert Gray grounded his vessel, Columbia Rediviva, after which the river is named. The canneries and gillnet boats have succumbed to decades of sou’westers, ocean storms that swell into near hurricanes as they race across wavetops all the way from Japan.

You wouldn’t know it today. Fluffy cumulus clouds scatter across a pale blue sky. The cotton-white clouds enhance the picture-perfect vista. The water — always moving, always dancing — appears becalmed. Matt parks his trusty auto and we initiate a five-mile sojourn, hugging the old roadbed. “There aren’t enough dollars in the county coffers to spend on repairing this country road,” he projects. He should know. Matt lived in Altoona for five blissful years in the 1990s. Other than his daily 90-minute round trip to the Chinook Observer, all was picture-perfect. Matt, of course, is the long-time editor of that insightful weekly.

Along the country road, quiet shadows us like an enchanted summer dream, something lovely and smacking of Shakespeare or Robert Michael Pyle, whose white Victorian perches above Grays River, not so far from here, particularly as a crow flies. Sunshine curls through the limbs of tall evergreen: cedar and fir and hemlock. Occasionally, a stream breaks through, hurls snakelike through tall overgrown canyons, and then under the Sleepy Hollow road before springing into the Wimahl, the Great River of Chinook lore.

The orchestration is sweet and enchanting. Sun motes bombard us. Island-shaped basalt forms rise out of the river like slithering fingers. The one at the end of the road, Pillar Rock is a historical stone shaft dating back to the journals of Lewis and Clark. And you can bet that the Chinook honored the rock edifice with some appropriate name, a destination point for their sleek cedar canoes as they paddled up or down river, master watermen. Broken boilers and rust-caked wheels six feet high rise like rusty sculptures from sandy beaches, reminders of another era. We think of better times, but, truth be told, they were hard times.

In the novel “Deep River,” you rendezvous in another time and place. I can imagine Aila Koski dancing something like the tango or the Lindy Hop, whirling on fir planked floors while the fishing boats rocked below on the incoming tide. If you were an immigrant from Scandinavia, this was the place to be in 1900. Salmon was king and the gillnetters unloaded their silver spangled bounty, king or Chinook (or Tyee to the Native Peoples) sometimes weighing 70 and 80 pounds. No easy road, those times. In his book, Karl Marlantes exposes both the joys and challenges of living in the early 20th century. While the life was harsh by modern standards, there are some striking parallels. Life has always had its obstacles.

Bob declares, as he often will, “So beautiful — the eagles, the river, the trees.” A simple message as the river runs through. The blackberries are flowering alongside the roadside. Soon they will bear fruit, so ripe, so sweet. We eat sandwiches, my wife’s delectable cookies, but overall, feast on the view. Offshore are Rice Island and the Miller Sands. Imagination fades pleasantly into the river landscape. Astoria sparkles in the distance. One can just make out the shape of an ocean-going freighter, at anchor, just beyond Rice Island. “Lovely, just lovely.” Bob is contributing simple verse to a simple day: all river and forest and the reeling dancing gyrations of earth and sky, and our dreams, each cloaked in happy carefree moments amidst pandemic.

UK to roll out millions of 90-minute tests. Doctor says US could do the same

US death toll climbs as Trump claims coronavirus under control