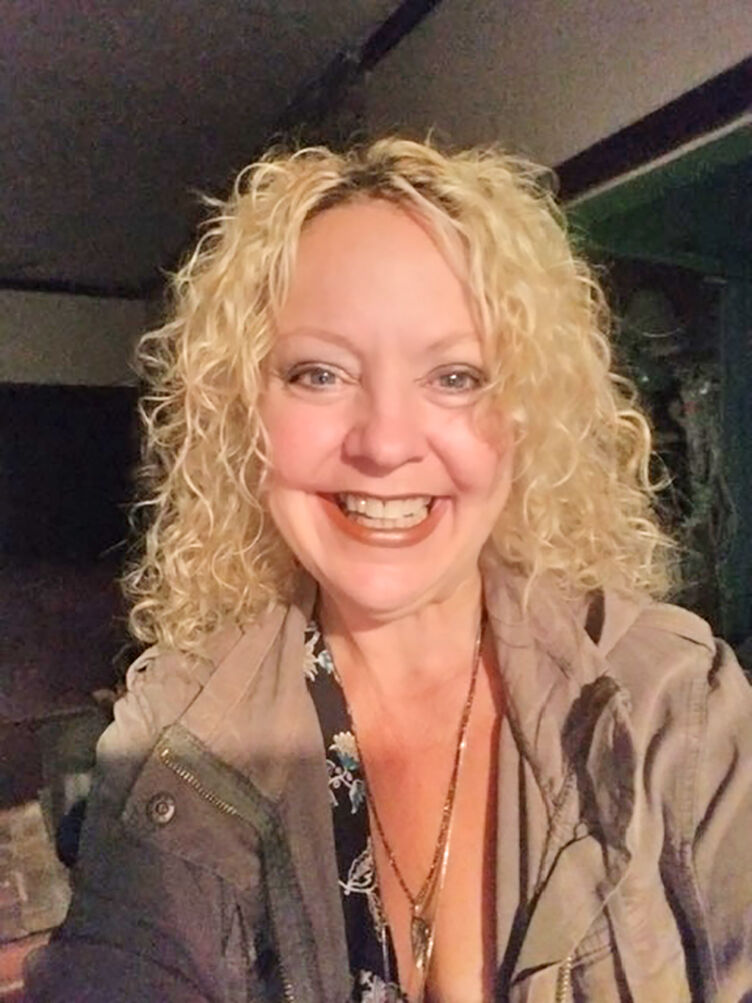 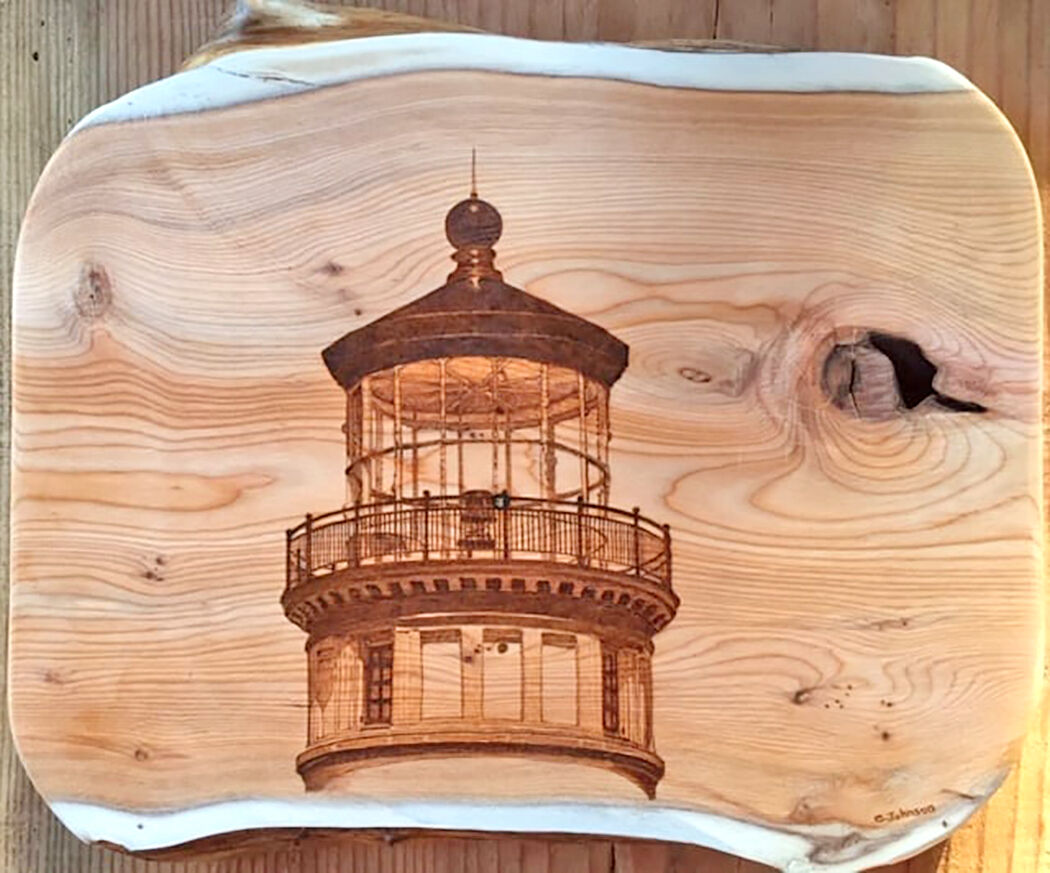 The detail in the lighthouse is carefully observed and a hallmark of Cathy Johnson’s wood burning art. 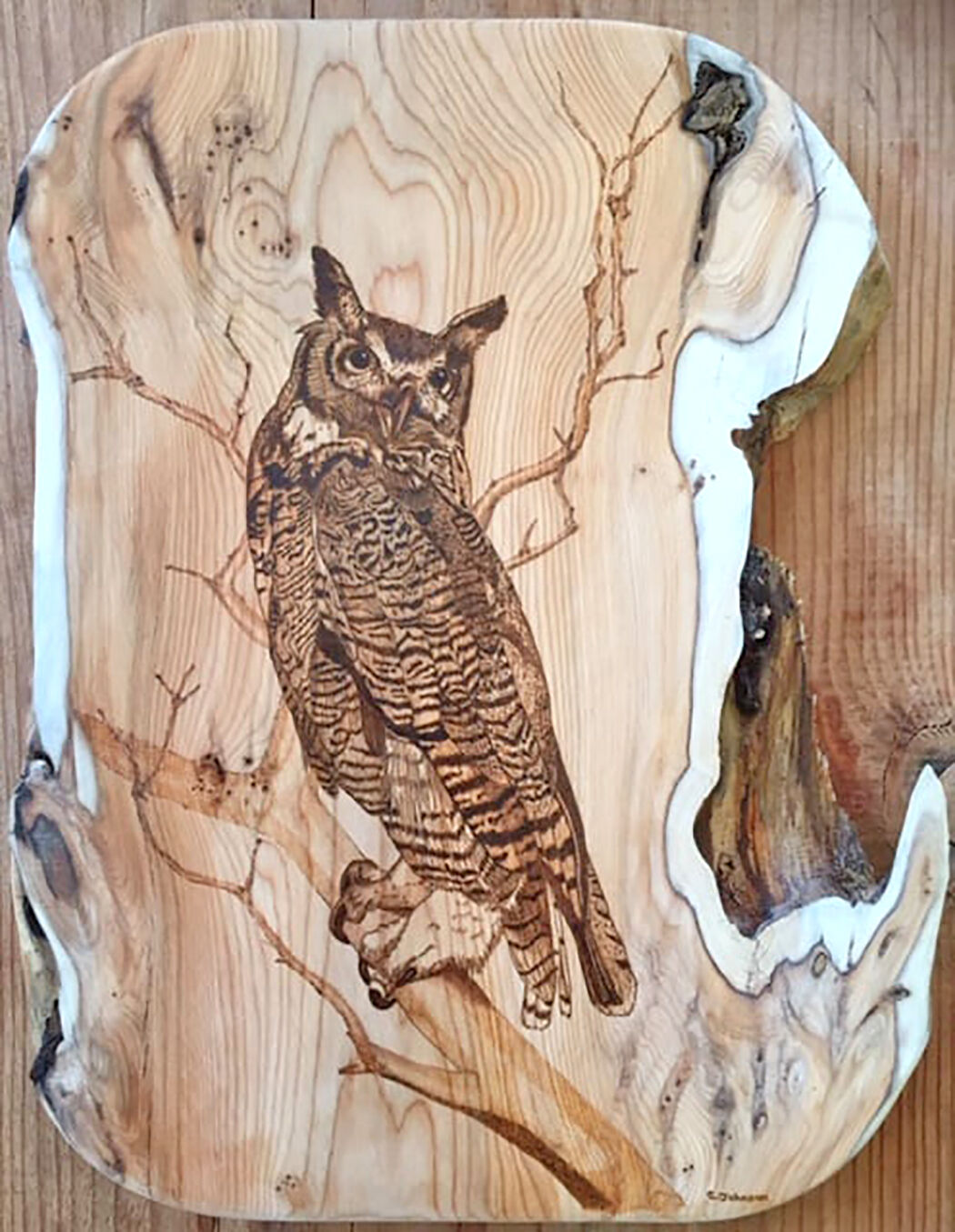 This lifelike-looking owl appears almost ready to fly out of the tree. “You really capture the eyes on your owls,” Jan Hill of Ocean Park posted in a Facebook response. 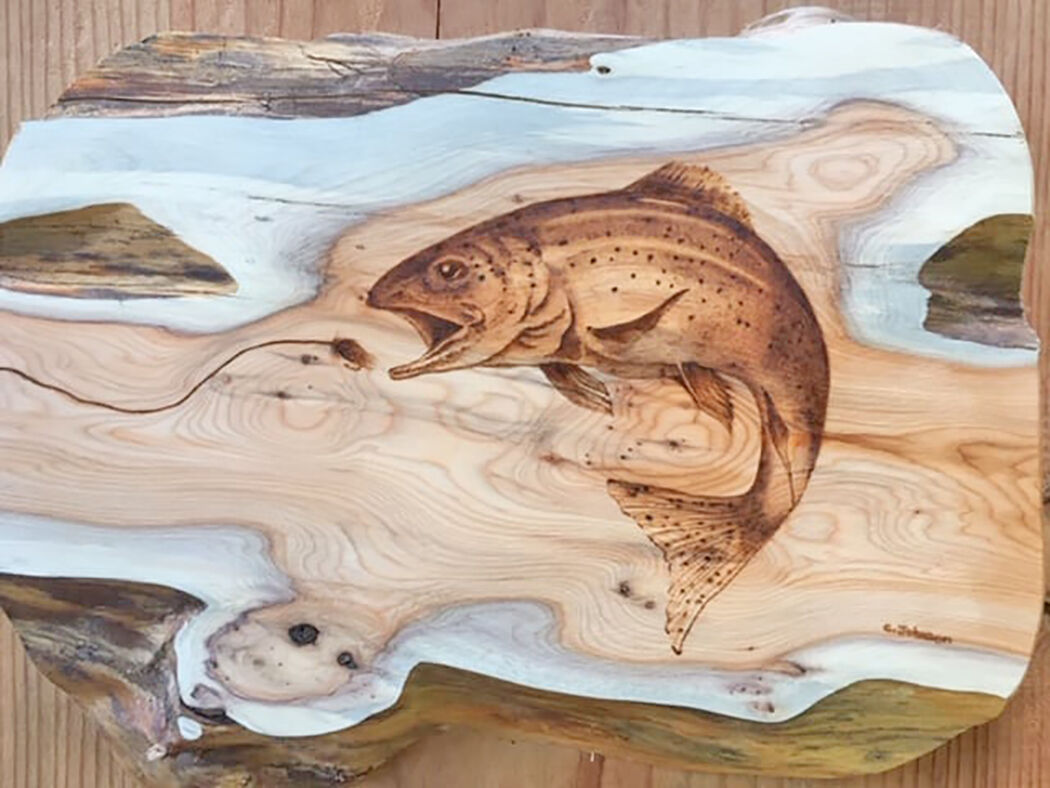 This fish, called “The Bite,” was one of Cathy Johnson’s praised pieces. 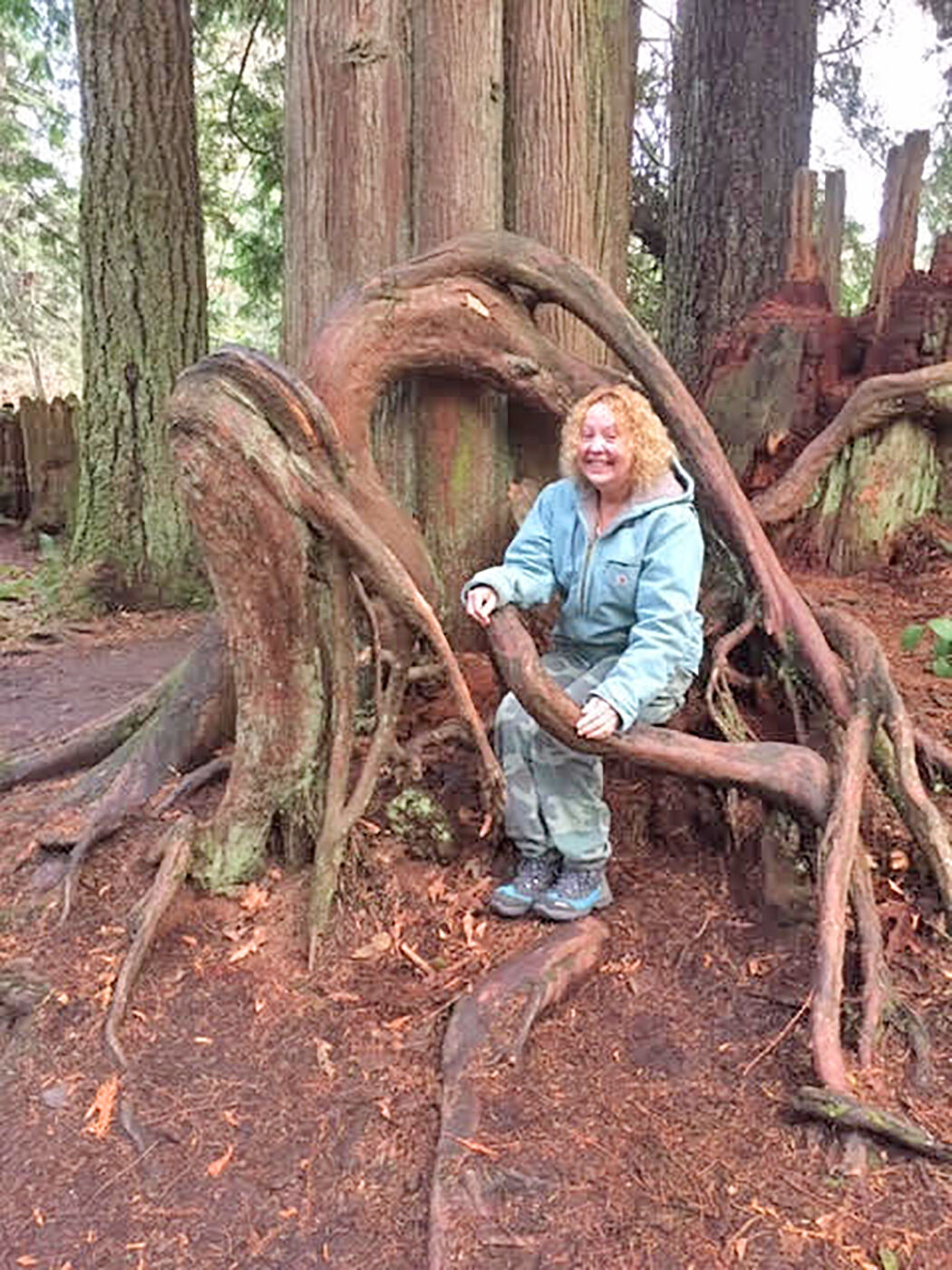 Cathy Johnson goofs around a tree, enjoying the Northwest outdoors. After a difficult early life, she says the positive applause for her wood-burning art this past year has had a healing quality.

For years, Cathy Johnson had no outlet for her art.

After a terrible childhood and later family trauma, she occasionally took out pencil and paper to draw, but a lack of encouragement stymied creativity and enthusiasm.

Then she discovered a new technique: Wood burning.

“I had never done anything with so much detail,” she said, describing bears, whales, fish, lighthouses and even a sailing ship. “I like to make them as realistic as possible. It takes a lot of patience. You have to teach yourself.”

Fueled by the soothing power of the ocean when she visits Long Beach, Johnson hasn’t looked back. “I love nature. It’s very healing, nature and animals. It is so freeing to be by the ocean.”

She began with a $20 tool but soon invested in top-of-the-line equipment with a razor tip.

Her wood burning art caught the eye of former school friend Nellie Hux, who regularly posts her own impressive scenic and eagle photography on the Long Beach Friends of Facebook website.

The moment Johnson’s art pieces were posted, positive comments rolled in from the site’s 16,500 members. A recent post featuring a lighthouse — then an incomplete work in progress — earned 107 likes, plus kudos from Rodney Inman and Adair Faircloth, who called it “beautiful work.”

Praise for her talents

Those applauding are not alone. Johnson is approaching 60. Hux has known her since grade school. They grew up in the same Vancouver neighborhood; Johnson’s sister married Hux’s brother.

“I’ve always known how artistic she is by her horse drawings and artwork through the years being shared at school,” said Hux, a para-educator in the Vancouver schools who is a regular Peninsula visitor.

“I’ve always envied her ability to make things so realistic in appearance,” she said. “Last year I noticed she was trying her hand at wood burning and asked if she thought she could do one from a picture.”

Works that followed featured a lighthouse and a bear. Both impressed Hux.

“She is a true artist with a gift — and ever so humble.”

The success of the art has become so rewarding that Johnson left her job as an administrative assistant for Legacy Health Systems and now considers herself a full-time artist. Customers request pieces and prices may go up to $500.

She says she sometimes sits and draws for seven hours at a time. A bear with a salmon took six weeks. “I just treat it like a job,” she said. “But it’s a fun job. I know if I am not into it I have to stop, take a break and get ‘in the mood.’”

The technique is called pyrography. It involves using a burning device, which some artists call a pen, to imprint the image on flat wood. Johnson’s boyfriend, Bryan, has plentiful yew at his 20-acre place in Olympia, and this supplies her art. “It’s hard to find, but it’s a really beautiful wood,” she said.

On her lighthouse work in progress posted on Facebook, J.C. Bills of Surfside commented, “It’s amazing how the grain of the wood looks just like waves.”

That’s intentional. Johnson employs the markings and grain in the wood, positioning the subject atop “waves,” for example. The white edges that appear on several pieces are not painted, but are actually the live edges of the yew. “You try to make every piece ‘fit’ the wood.”

As well as familiar outlines of Ilwaco lighthouses, bears, birds, whales and otters appear in her art, which she displays on her Facebook page called Smokin’ Wood Pyrography Art.

Like artists in other mediums, she prefers not to repeat subjects. “I will continue to do lighthouses,” she laughed.

Johnson delights in mentioning that only one spoiled effort has ended up on a discard pile. “Most pieces you start with a really light burn. If you make a mistake it is not a problem.”

While teaching herself, Johnson read extensively and watched YouTube videos. She adopted concepts from experts like Betty Edwards who have written about right/left brain artistry.

She researches pictures for inspiration; sometimes people who ask for custom orders will send an image. One technique embraced by other artists is to draw a subject upside down. “Then you draw it — you see what you see, not what you want to see,” she said.

Next for Johnson, is a move 300 miles inland to Tonasket, in central Washington, 20 miles from the Canadian border. There they plan to live off the grid on Bryan’s 180 acres and build a solar-powered cabin with a generator back-up, trying it out next winter before locking into the idea.

But she pledges to continue her art — because of the joy it brings to others.

“I like making people happy. The Long Beach community inspires me,” she said. “I was always told that I ‘wasn’t good enough’ and needed to get better.”

The positive Facebook responses have warmed her. “I am my own worst critic, because I know where the mistakes are,” she said. “But they are kind of like the pat on the back I never got.

I can do this all day! Happy 40th birthday Chris Evans

10 summer blockbusters to watch in cinemas