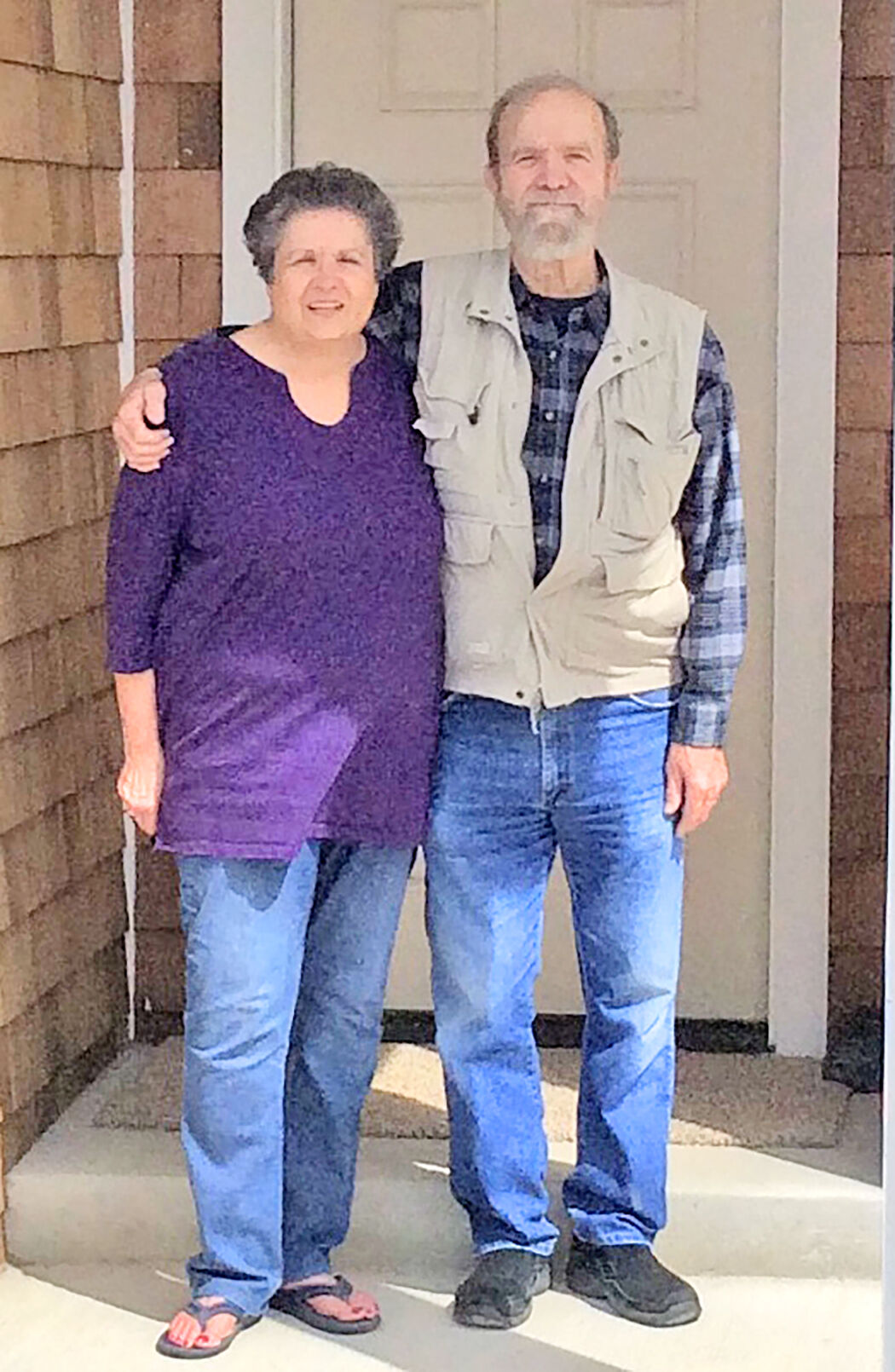 Sandi and Don Soreng of Seattle retired to Long Beach in 2014. Don has just published an autobiography focusing entirely on his childhood, spent largely overseas, through his Navy service in Vietnam to beginning college in Seattle in the early 1970s. 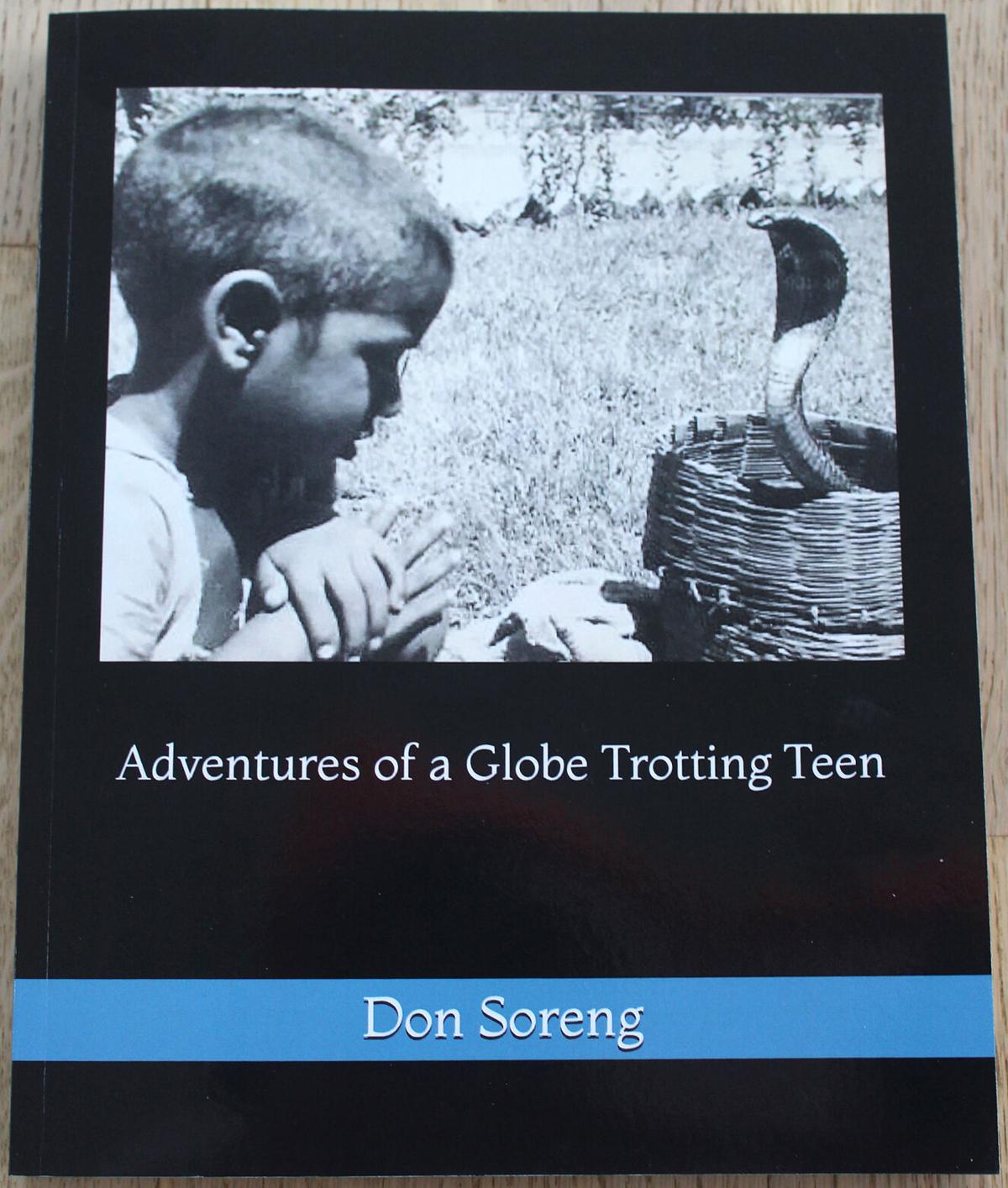 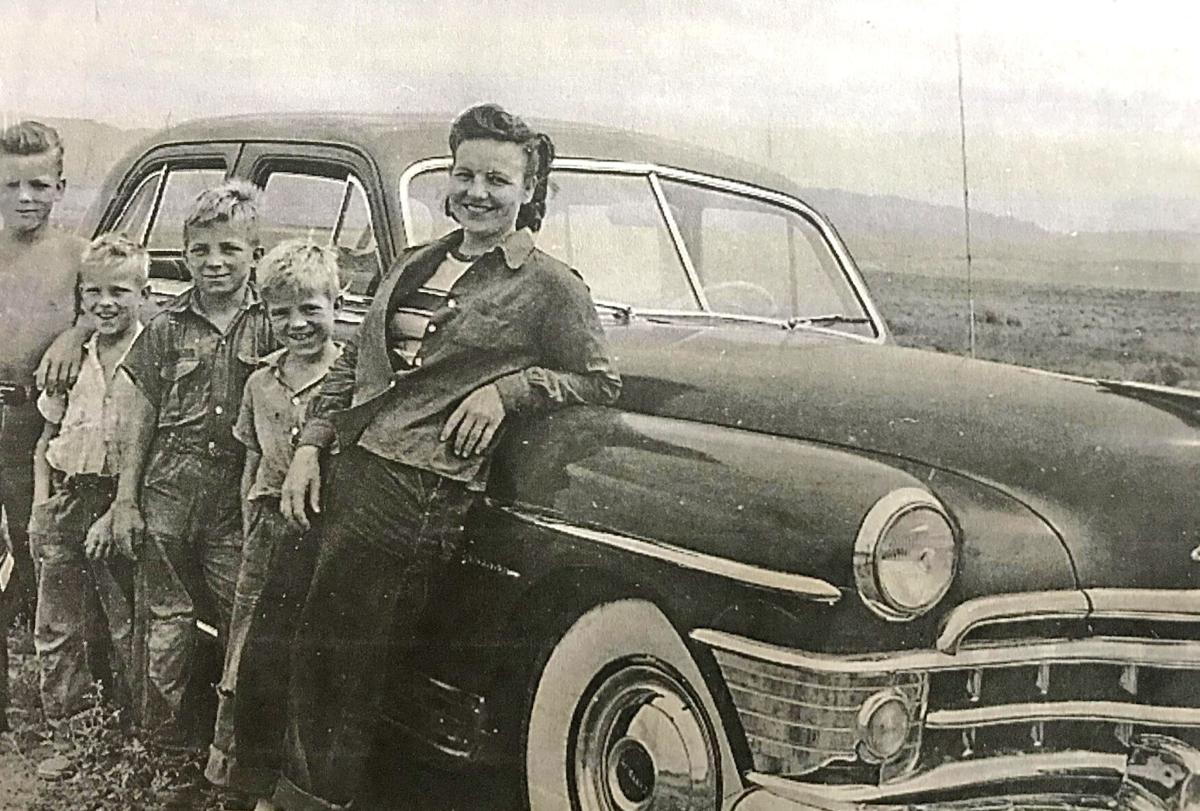 Geneva Soreng is pictured with the family’s 1950 Chrysler Saratoga on a shopping trip to Caspar, Wyoming. Children, left to right, are Mike, Marvin, Melvin and Don. Father Michael was constructing the Boysen Dam. 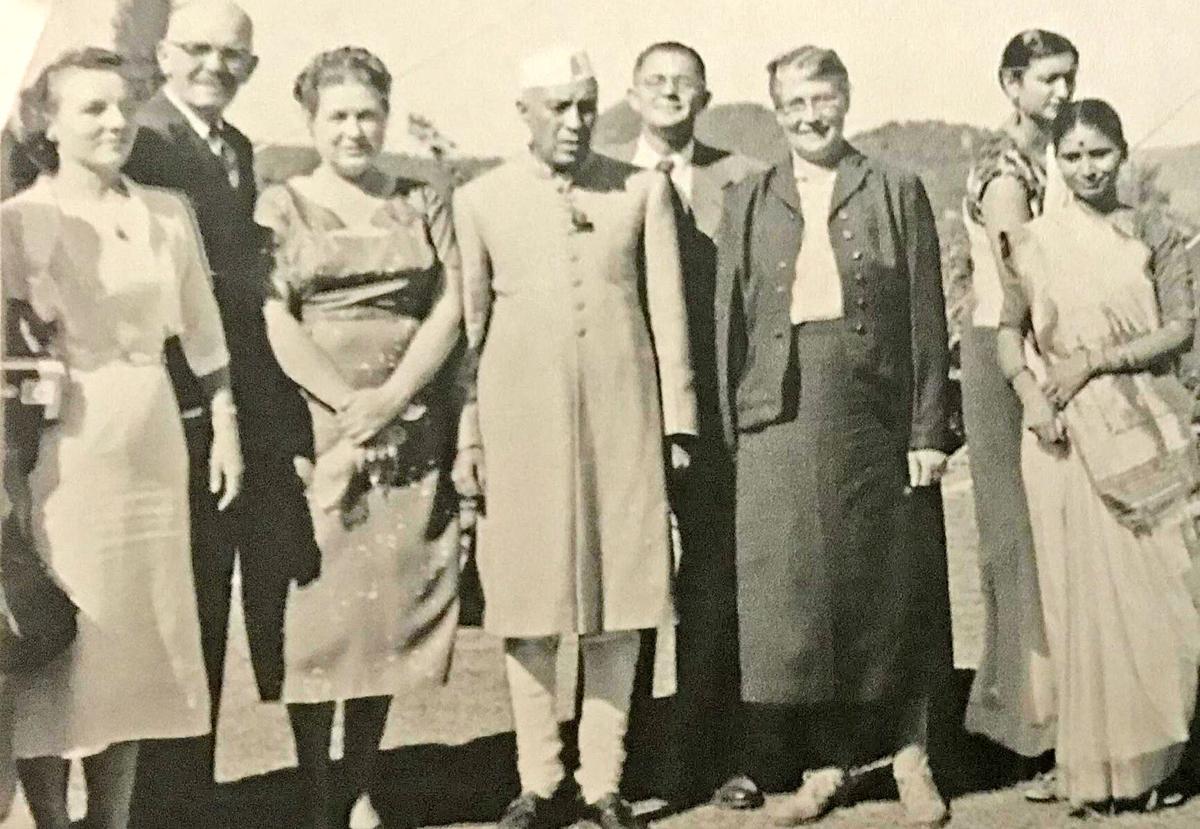 Geneva Soreng, far left, is pictured with Jawaharlal Nehru, prime minister of India, fourth from left, during the leader’s visit to the Bhakra Dam in Nangal, India, in 1957. Author Don Soreng’s father, Michael Soreng, who took the photo, worked on the dam construction.

Riding a camel near landmarks like the pyramids and the Sphinx in Egypt was among the treats during the Soreng family’s vacations in the Middle East. Geneva Soreng, center, wore a black polka dot dress for the ride. The family was in Cairo in 1961 when news broke of the Cuban Bay of Pigs incident and narrowly escaped being caught up in an anti-American street protest.

On the front cover is a picture of a little boy whose face is inches away from the deadliest snake on the planet.

On the back cover is a picture of a smiling man, now 77. He wasn’t that child — the lad was an Indian snake charmer’s son — but he was around when the photo was taken and shared some exotic experiences.

“Adventures of a Globe Trotting Teen.”

Buyers who would like their printed copy signed can correspond with the author at P.O. Box 1381, Long Beach WA 98631.

The book is his story.

Don Soreng retired to the Long Beach Peninsula with his wife Sandi in 2014 after a colorful early life packed with adventures as his father moved the family around the Western United States and to India, Iran and Taiwan building dams.

His published story is intentionally short of later details. It is about his “extraordinary and rare” boyhood and that’s why it is called, “Adventures of a Globe Trotting Teen.”

And Soreng hopes that publishing his oversized paperback now will give an encouraging perspective to young people whose lives have been turned upside down by the Covid shutdowns.

“It’s all about travel and education as a teenager,” said Soreng. “It fits in well with missing school, and having no teachers. I thought it might be of interest and encouragement for kids that missed a year of school.”

With a chronology that is an essential reference to the globetrotting progression, the 308-page book is self-published and sold by Amazon. It details Soreng’s unconventional childhood with grainy snapshots of his family in the 1950s, periods spent overseas in India, the Middle East and China, plus his early adult years serving in Vietnam in the mid-1960s with the U.S. Navy’s Seebees.

“It shaped me for being ready to adjust to any situation and make the best of it,” he said.

His father, Michael Soreng, the son of Norwegian immigrants, was a “bootstrap tough guy.” He had served in the Civilian Conservation Corps, worked as a civilian alongside the U.S. Army Corps of Engineers during World War II then hopped the rails scouring the West for work. He married Geneva, a divorcee with a boy and a girl, and they had four boys together. Don Soreng is the youngest of the six children, of which two others survive.

During the 1950s, Michael Soreng helped build Grand Coulee, Rock Island and Chief Joseph dams in Washington and others in Wyoming, California and Montana. “He went from job to job,” Don Soreng said. “I lived in five different places in 1950 alone. I don’t even remember Kindergarten or first grade.”

The first overseas assignment was 1957 in India, followed by Iran and later Taiwan.

“I loved India the most. The people were marvelous,” Soreng said. “We always lived in rural areas — they don’t build dams in Manhattan!”

With extensive detail his book highlights Indian culture amid the tensions that existed between Hindus, Muslims and Sikhs 10 years after the country declared independence from Britain. One photograph shows Prime Minister Jawaharlal Nehru with the formally dressed American family at their dam project site. Other stories describe professional beggars and intrigue over bridal dowries.

Soreng’s book details his boyhood adventures in these locales, including the snake charmer his father photographed, vacation visits to Lebanon, Jerusalem, King Tutankhamun’s tomb in Egypt and the Taj Mahal in India, plus a stint working on a farm in Kenya. He describes his joy trading postage stamps; one anecdote describes his failure to explain Abbott and Costello’s humor to a friend in India.

Not all experiences brought a smile.

Soreng was appalled at the racism shown by some other American children from the South to darker skinned people in India. He spent time in an airport jail during one trip and was once briefly detained aboard a ship in East Africa. Visiting Egypt during the Cuban Bay of Pigs fiasco in 1961, the family had to flee a raucous anti-American street protest.

Each time they moved, his education was disrupted. A low point in Iran made him question whether to continue his life.

“I can learn fast because you have to,” he said. “You go into a school where you have missed the first three months . . . if you want to get through, you learn to work fast. The teachers were very willing to help me out.”

The end of his father’s Taiwan project in 1963 coincided with his school graduation and a move to California.

Knowing at the height of the Vietnam era that he would be likely drafted, Soreng enlisted in the Navy. “I didn’t want the Army. I wanted to ‘choose my poison,’” he laughed. After basic training, a skeptical master-sergeant informed him only two of 1,000 recruits earned construction battalion postings. He served two tours with the Seebees, performing electrical work at U.S. Marine Corps advance bases and building airstrips. “There was a shortage of tools,” he added. “I had wire clippers and a screwdriver. We would wire tents with lights.”

He completed his service as a brig guard in California then discharged in Seattle in 1968, where he married Sandi and began his college education.

The book ends at 1973 when Soreng earned a degree in from Seattle University on the G.I. Bill. Afterward, he dabbled as a tax accountant and a retail auditor before realizing, after a half-dozen jobs in three years, that a better career would be using the electrical engineering skills he had learned in the Navy. That experience shortened his apprenticeship and he worked for a Kent-based electrical company, then Boeing, before a brother lured him to Seattle City Light, where he worked 24 years, including doing some technical writing.

“I never regretted getting a B.A. in business administration and accounting,” he said. “Education never hurt. The college degree always helped.”

Retiring in 2007, with time on his hands, he joined a writers support group in the Seattle area.

“They were ‘wannabe’ and accomplished authors and they encouraged me. They said, ‘Write about what you know.’ I started writing about my experiences.”

He regrets that he had failed to heed his father’s advice to compile journals of their exotic locales. But two sources prompted memories.

“We had hundreds of photographs. It is amazing how photographs of travels will help our memory banks. They were programmed in my brain.”

His father’s habit of treasuring letters helped immensely. “He had kept correspondence from all the children and copies of what he wrote to us. I thought, ‘what a goldmine!’”

Though much of their lives were spent in the greater Seattle area, the Sorengs had honeymooned in Southwest Washington and spent pleasurable vacations in Long Beach, hence their move seven years ago.

Along his life journey, Soreng said his faith has sustained him. Though not from an overtly Christian family, his half-sister used to take him to a church in Bellevue. When he enrolled at Seattle University, a Catholic institution, he had trouble with a required class. “I went to the Jesuit priest that was teaching and said, ‘I didn’t understand a thing.’ He said to read some books and do a report. I got an A because I could read.” He later enjoyed gatherings led by a missionary at a construction camp in Taiwan.

The blurb on the back cover of his book suggests he is driven by “adventure, education and adaptation” that twist together to form “one strong fiber — an inner fiber that has been a mainstay of my life.”

Watch the trailer for CNN Films' 'Race for the Vaccine'

Best TV shows that were canceled