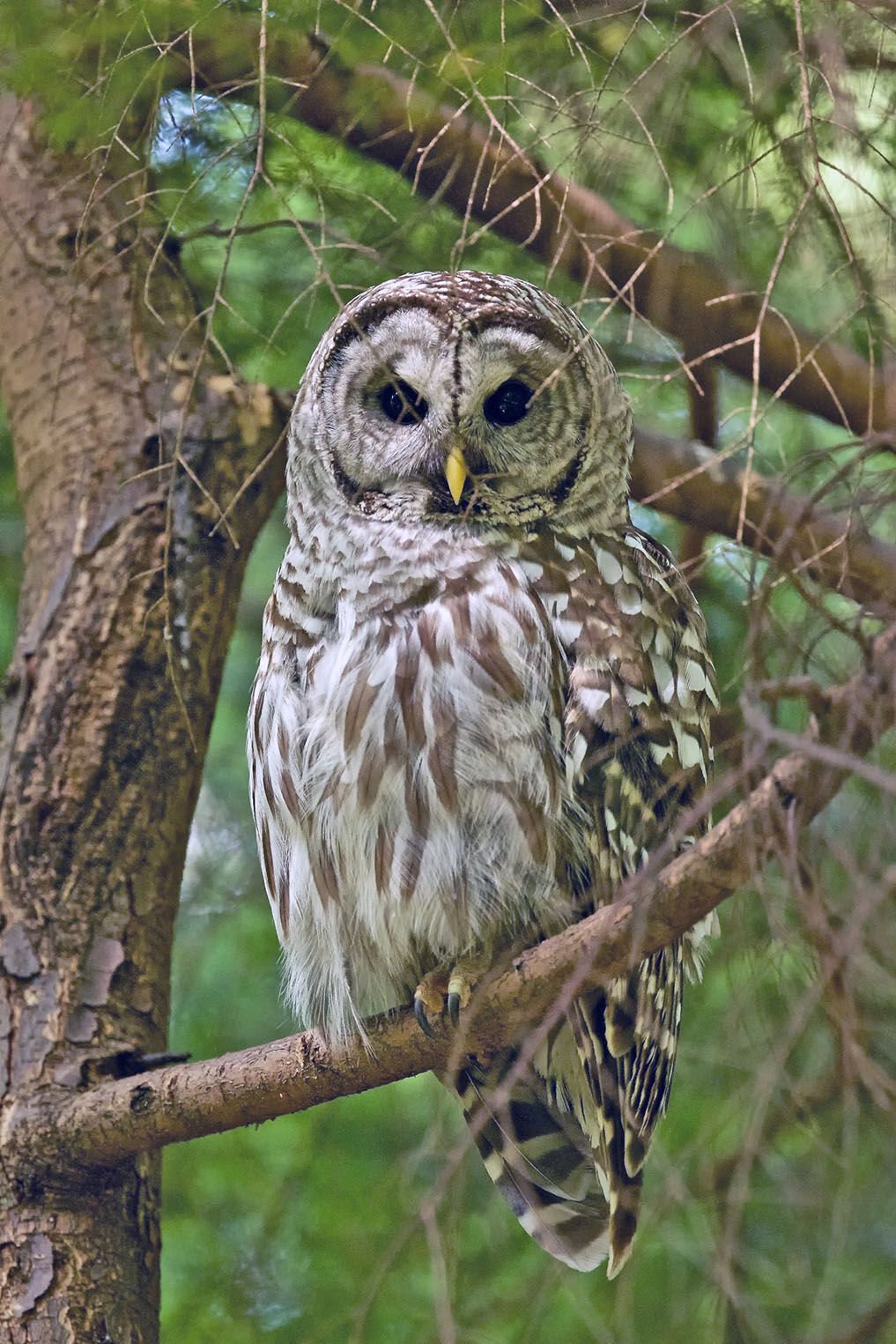 The barred owl is not native to Washington state, but it can still play a valuable role in managing rodents in your forests. 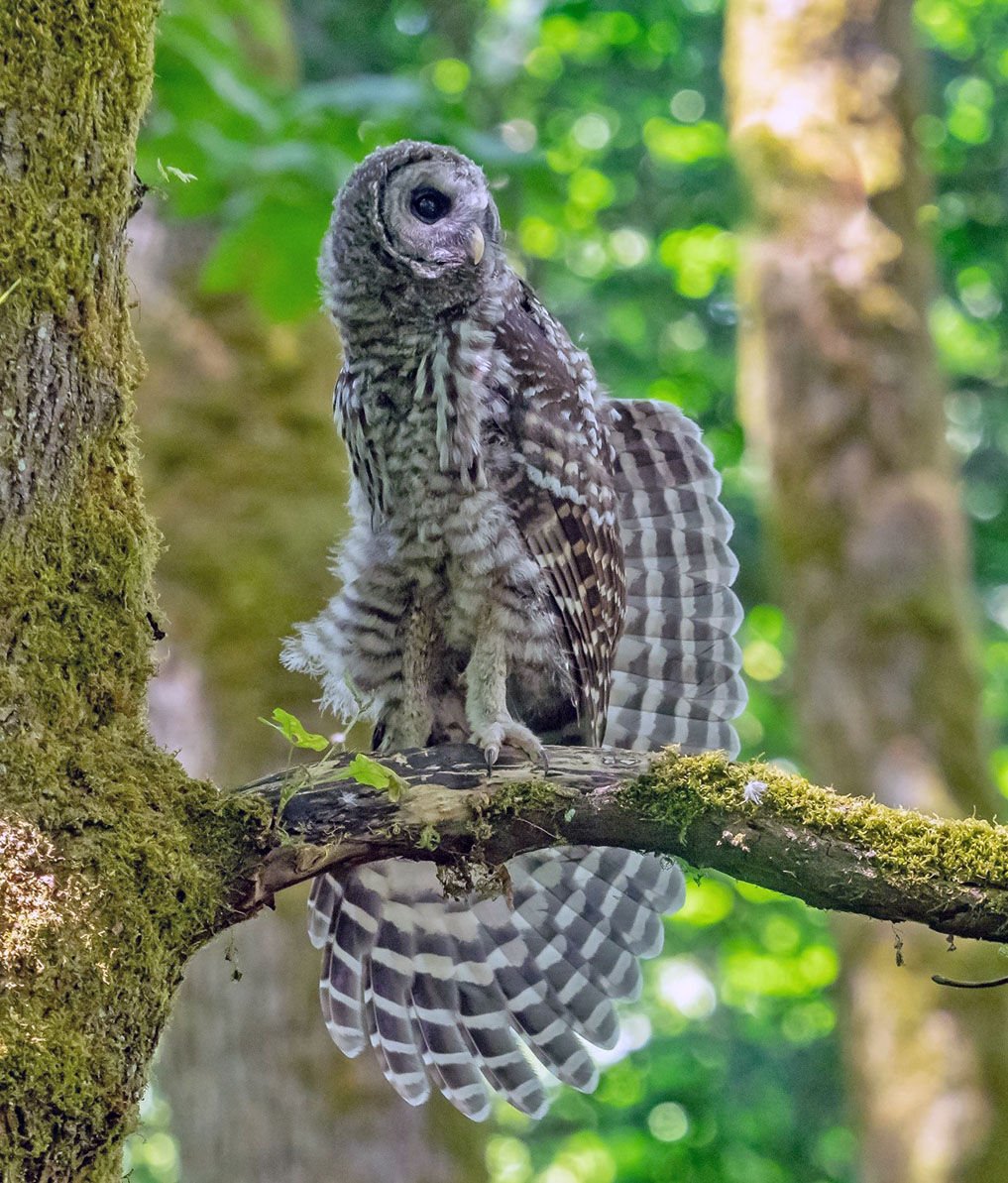 A juvenile barred owl shows off its plumage as it stretches.

The last note rises into an amazing inflection that can only mean one thing — a barred owl.

Strix varia is a medium to large owl that resides in the forests of Washington, Oregon, north Idaho, British Columbia and parts of California. They are very widespread, occurring in all but the high-elevation forest types. They do well in second- and third-growth forests, and are an often observed, relatively common species, particularly in western Washington. They will even live in towns!

Barred owls have a distinctive round head and dark eyes (no “ears”) and generally perch in the lower and middle crowns of large trees. Their coloration is mostly light, ghostlike gray, with distinct vertical barring on their breast. They are known to eat almost anything alive, including snakes, birds, and small mammals. One study even found fish in their diet. They are highly territorial and very vocal. Almost all of our small forest landowner clients have heard and/or seen them on or near their properties, and marvel at their raucous calls.

Interestingly, barred owls are native to the eastern forests of North America, not the Pacific Northwest. In the latter part of the 20th century, they made their way across the continent, somehow skipping across the Great Plains from one patch of trees to another (riparian forests and towns as stepping stones) and arrived here.

The first documented sighting in Washington was in 1965, and each year they spread. Today, they occur throughout forested regions of the northwestern United States. (You can learn even more about the species from the Seattle Audubon and the Washington Department of Fish and Wildlife.)

They are closely related to our native spotted owls, and have even been known to hybridize. Barred owls are more aggressive than spotted owls and are thought to displace spotted owls when territories overlap. This has put a considerable wrinkle in recovery efforts for the spotted owl.

Barred owls have another peculiar habit that is infrequently experienced with owls — they sometimes attack people. (Great horned owls will rarely do this, too).

Recently, I had cause to hear a story from forestry consultant Becky Chaney in King County, who was repeatedly swooped and struck by a barred owl. As she retreated from the forest, the owl drew blood with a direct surprise hit from behind with its talons.

Becky relayed this story of a different aggressive owl from a friend of hers in an email:

“My entire trail crew (I think it was four of us) got chased down the trail as we headed back to our rigs after work — it was dusk, we were at 10-foot spacing (tool safety), and singing silly songs. About half a mile from our truck, the owl came from behind with a warning swoop. We took the hint and booked it, and were glad we all had hard hats because it was coming for our heads. The attack was very real, the owl intended to cause real harm, and we were chased almost all the way back. (How big is an owl’s territory?) I think ours was a barred owl but the light was dim (and we were really focused on not tripping/falling as we booked down the trail with our tools). Maybe it’s just an owl, but they are large, know how to maximize impact when striking, and have nasty talons.”

I reached out to Ruth Milner, district biologist for Washington Department of Fish and Wildlife in Mill Creek, and asked about this behavior and WDFW’s response. Ruth wrote to me in an email:

“We’ve had a bunch of these attacks this year, starting in early September, if memory serves. We think these are juveniles who are frustrated because the parents are booting them out and refusing to feed them. So they may be taking out frustrations or simply bored and honing their swoop and grab skills. … WDFW will … advise people to avoid the area where the attacks are happening. It’s likely one bird, and the bird is probably hanging in one general area. It’s not clear that the attacks will abate in winter because that’s when most of these kiddo attacks seem to happen. But come spring, the adults will expel the offender. Peace will reign until the next batch of chicks start to fledge.

“Also, I have a couple of people who are experimenting with wearing hats with large eyes attached to the top of the hat.”

It seems these are the same birds in the same areas being territorial. Most of the incidents are a swoop and hazing of sorts. Seldom is blood drawn, but it is definitely intimidating.

Seasonality of the swoops is usually late spring when nesting owls have juveniles on the branches, and these autumn incidents. But it is rare. I have been told of an owl swooping on someone more than once, but Becky’s story is the first I have heard involving blood.

Safety measures could include hard hats, carrying an umbrella or something like the eyes or a face mask on the back of your head (like people do in areas of India where tigers live). Remember: It is a localized and seasonal behavior by a small number of birds. It’s best to avoid that area when it happens.

As with all other owls, barred owls are a protected species in Washington, and cannot be killed indiscriminately.

They are a beautiful member of our forest ecosystem and obviously have an attitude that helps them play their role in the natural forest ecology. Owls are good to have around, as they are major predators of rodents.

Owls usually roost inside the canopies of larger trees, close to the tree bole. Retaining patches of tall trees of at least a quarter acre will provide interior roosting and possibly nesting habitat. Owls don’t build nests of any kind, so they must find a platform of some sort — an old crow or raven nest, the crook of a tree, a mistletoe platform, or even cavities, for some. Retaining defective trees provides this habitat. Search the bases of prospective nest sites for owl pellets and white wash (poop) to try and locate nests.

Embrace the barred. Don’t worry. But when they tell you to stay out of an area, you might want to do that!

WDFW’s “Living with Wildlife” publication makes these suggestions for encouraging owls to live at or visit your property:

• Protect quiet, secluded areas near rivers, creeks, and lakes and away from human activity.

• Protect or plant hedgerows and thickets to attract small mammals that owls eat.

• Leave large grasslands alone or mow them only infrequently to provide habitat for small mammals that owls eat.

• Manage mice and rat problems without poison baits, which can potentially kill owls.