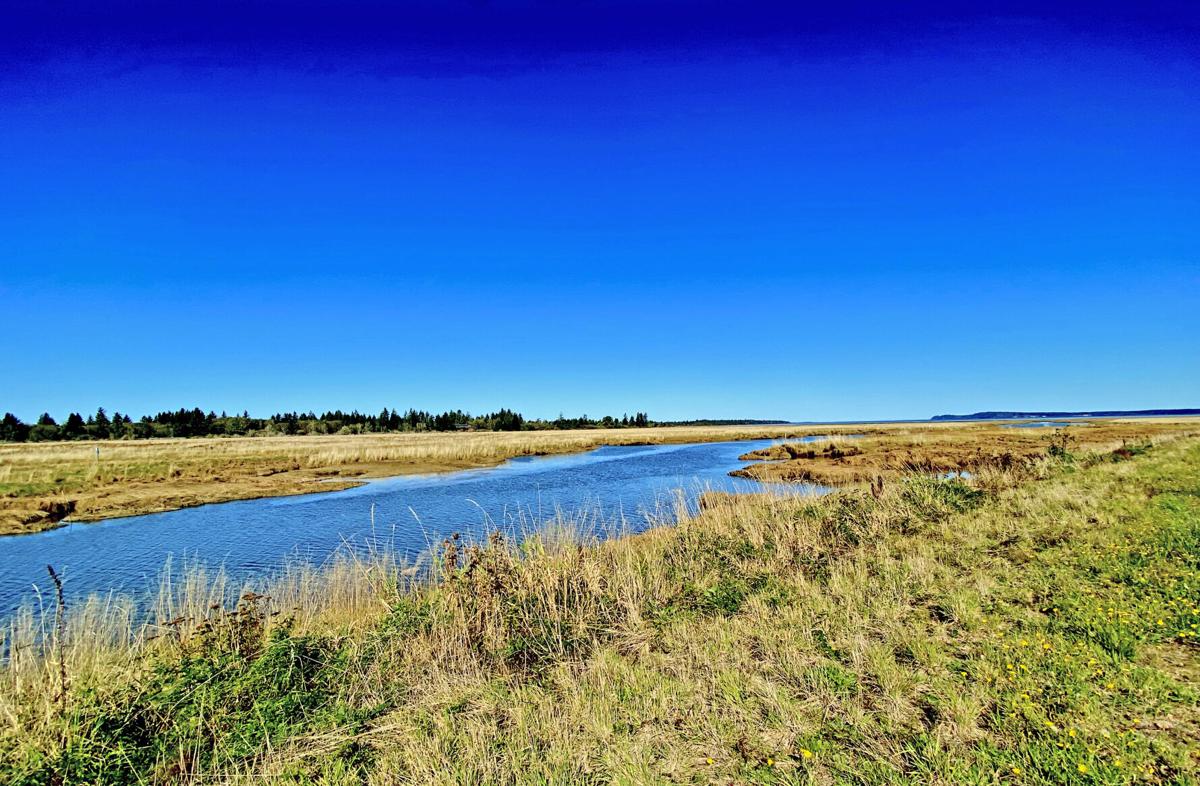 One of the many sloughs that weave through the Willapa National Wildlife Refuge at Low tide. 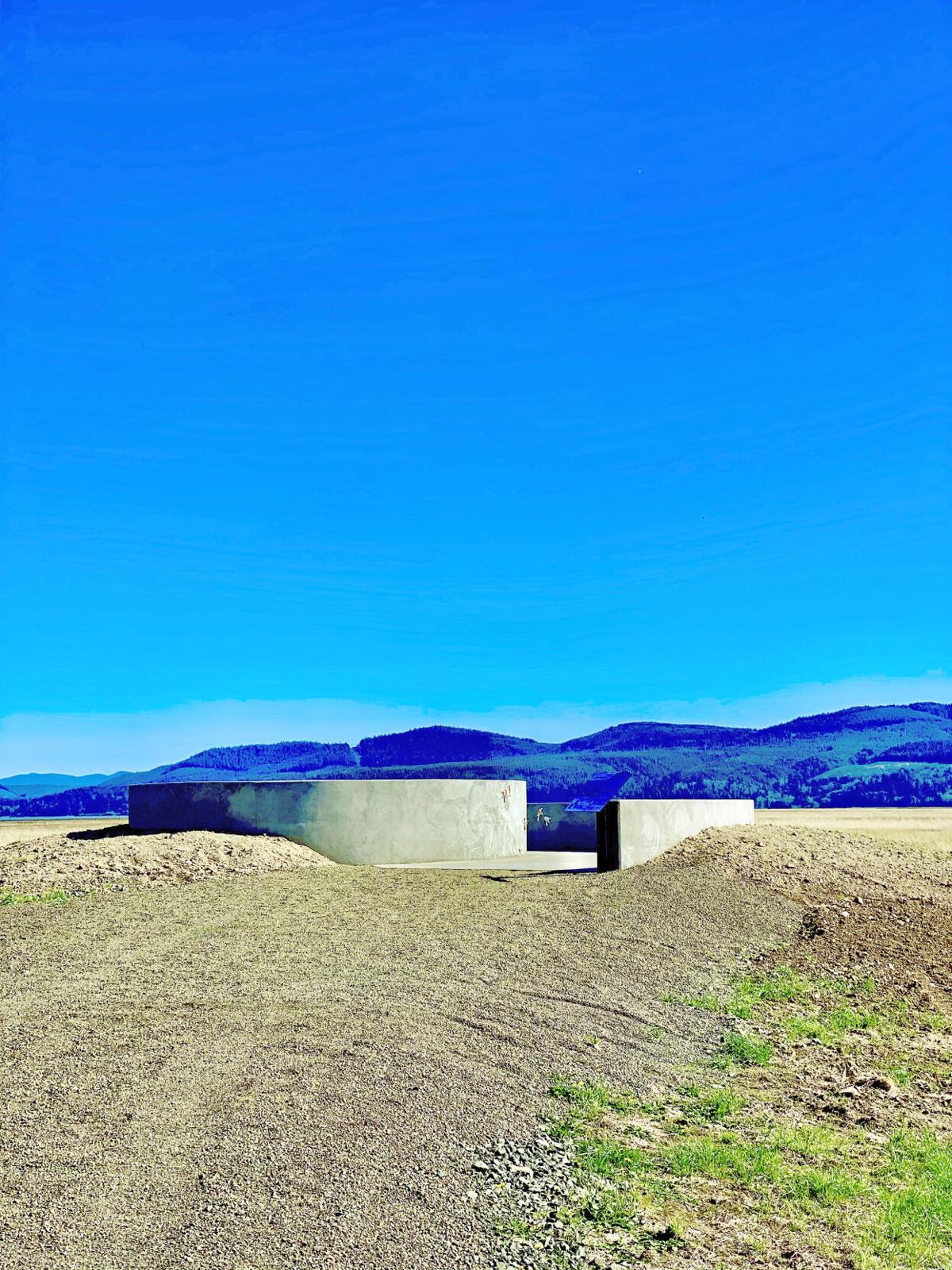 The new overlook facing Willapa Bay and the Willapa Hills. 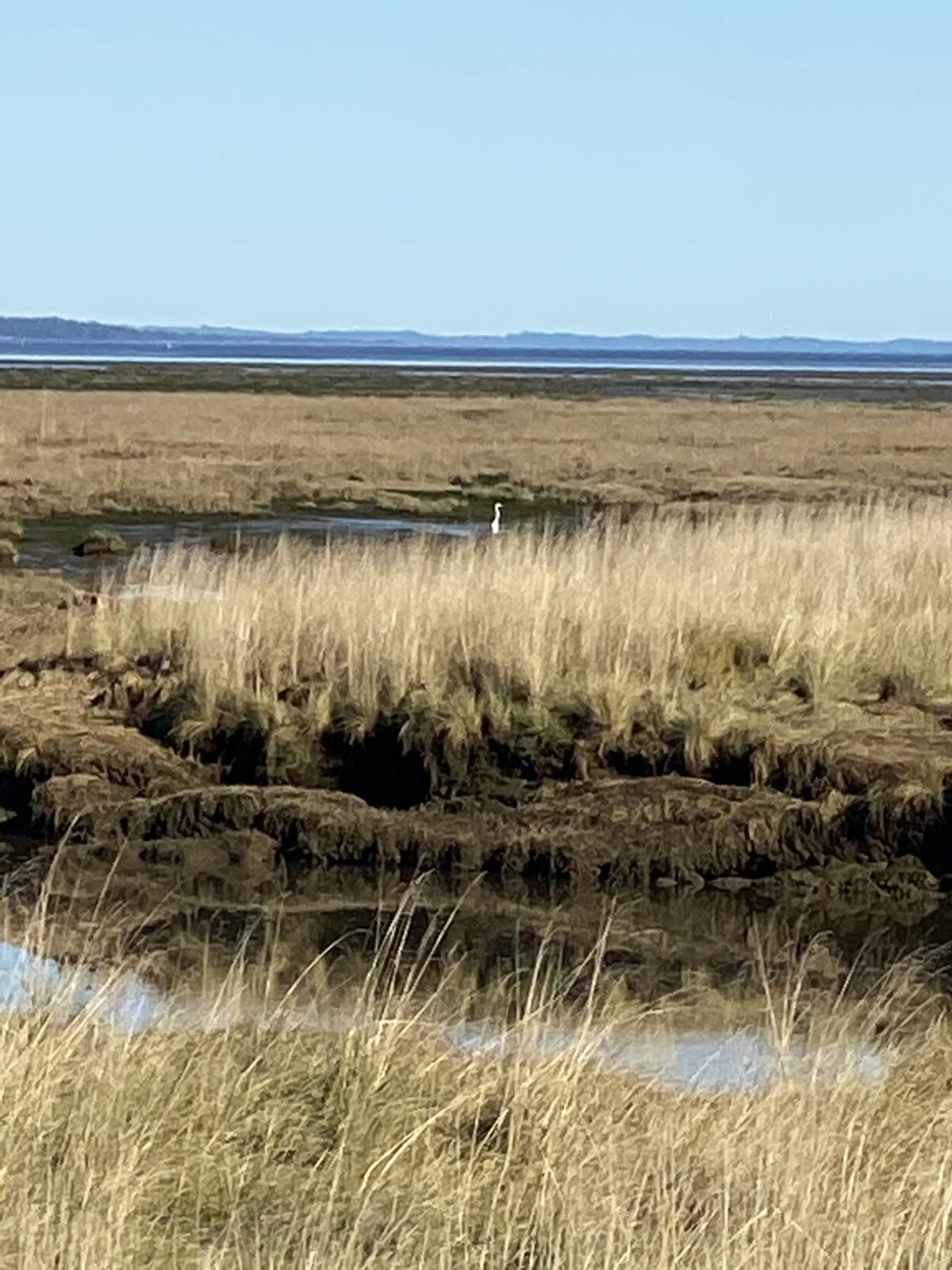 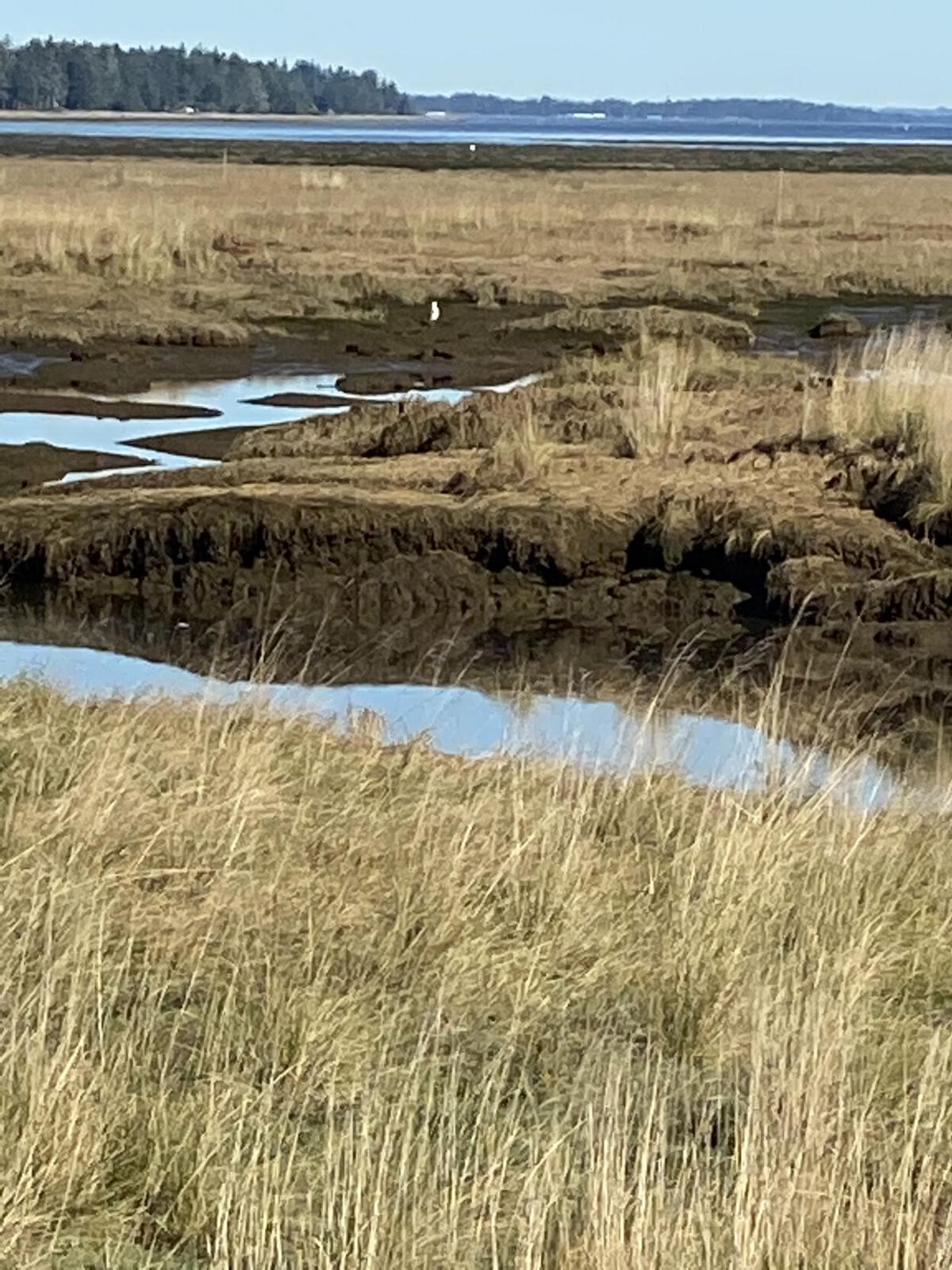 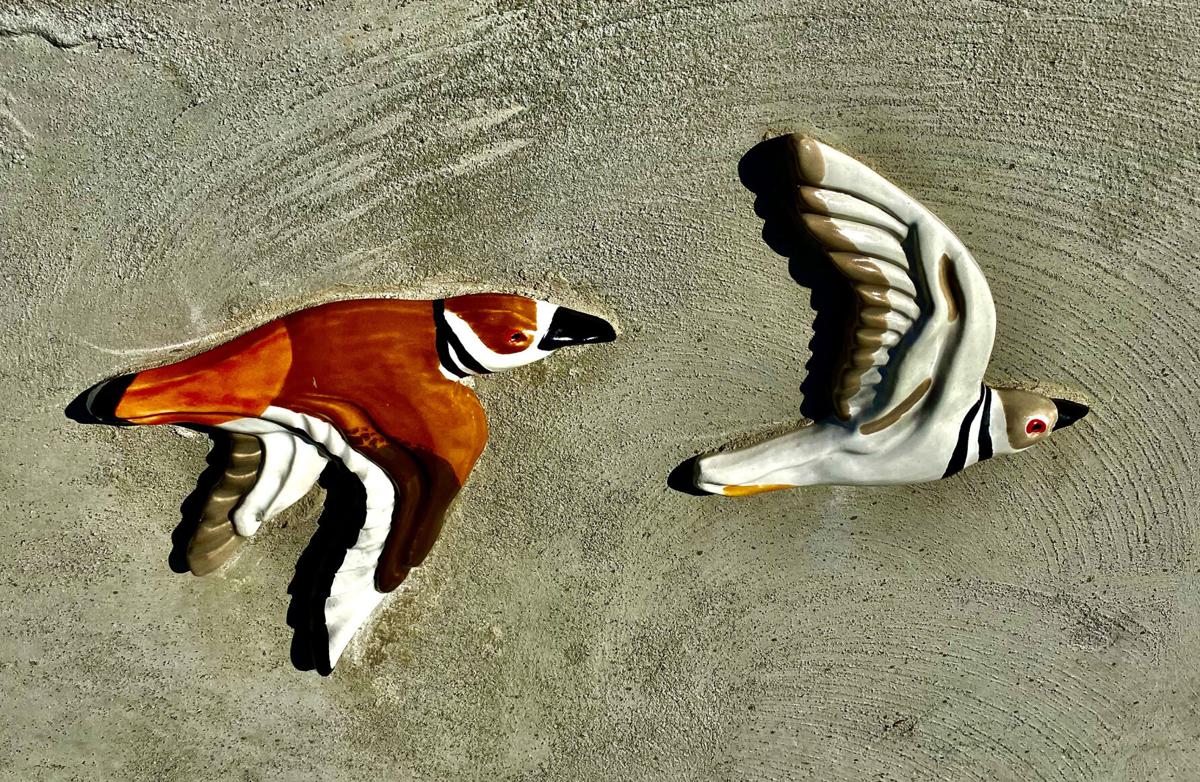 Renee O’Connor’s ceramic shorebirds enhancing the walls of the Overlook.

One of the many sloughs that weave through the Willapa National Wildlife Refuge at Low tide.

The new overlook facing Willapa Bay and the Willapa Hills.

Renee O’Connor’s ceramic shorebirds enhancing the walls of the Overlook.

Just daylight, and the bay is ebbing, exposing shoals and sloughs and a vast array of waterways that weave like pulsing arteries through the shallows of what was once called Shoalwater Bay. And now, there is another evolution at play. What were recently sweeping fields of spartina grass — a plant that was choking out hundreds of invertebrates, plants and waterfowl — has been eradicated. The world of oysters and sedges and the diverse cornucopia of bay life has come racing back into the Willapa. Here we experience the pungent salty breath of this sterling estuary. OK! We can taste it, too; taste the essence of this saltwater paradise. Most notable are the miles of tufted hair grass, Lyngbye’s sedge, and fields of plant life that supply life and shelter to this saltwater wonder world we call the South Bay Unit of the Willapa National Wildlife Refuge.

And the birds: Lesser yellow legs, killdeer, western sandpipers, short-billed dowitcher, sanderlings and dunlins, just to mention a few, spiral and spoon about us, as we visit a newly constructed knoll called the South Bay Trail Overlook.

This elevated observation point allows easy access to the heart of the south bay for residents and visitors alike. The overlook spirals into a small arena where birders, trekkers and guests can wile away hours watching the waterfowl and predators like the northern harrier hawk or the spirited Bald Eagle swoop and pirouette just yards above your head. I’ll be honest: I like to explore the wildlands as much as anyone, and don’t resent a bit of discomfort. But 72 years and knee replacement have slowed the boy down. Tarlatt Slough snakes its way to 95th off Sandridge. From here you can follow the slough as it heads east back into the Willapa. The first time I did this, a family of otters supplied entertainment.

Today, the waterfowl are migrating south. Among the usual culprits like the mallards and pintail, green-winged teal were in abundance. So were the kingfishers, herons, and today, a pair of white egrets. The northern goose, often called the Honker, punctuated the blue skies in great flocks. Their calls echoed for miles on a nearly windless day. The bay seemed to move listlessly but harmonically, like the flutter of wings as flocks of ducks settle over the fertile fields of the wildlife refuge.

Sometimes it is the lack of sounds that seeps into the soul. Sometimes, one might even imagine that the easy lap of tide prays to a music all its own, as if a symphony is opening with an intoxicating swell of soft sounds, like Aaron Copeland’s, “Appalachian Spring.” Or a kiss in the dark.

Of course the point of all this is simple: this is an offering from the U.S. Fish and Wildlife Service for you, to you and your family, to all of us who believe and support our wild lands.

Offshore is Long Island, a natural treasure trove in the making. Once nearly logged into third growth forest, the island has been preserved and maintained for the pleasure of anyone with a kayak or motorboat. The 274-acre grove of western red cedar called the Bonker Grove is as magnificent as any small forest in America. Tours are offered annually, and the Ocean Beach fourth grade class visits the refuge, and in turn, is visited by volunteers from the Friends of Willapa National Wildlife Refuge several times during the school year. Indeed, the most vital mission of this group is education. And where better to start?

Much to see and do

The overlook has been punctuated by the stunning ceramic tile work of County resident Rene O’Conner. Kathleen Sayce and Todd Wiegardt have selected indigenous plants to surround and enhance the concrete overlook, this one exposed to the capricious weather of Southwest Washington, and as a reminder of time and place. Sayce and Wiegardt are master gardeners, and Sayce has a reputation for an encyclopedic knowledge of our natural world. She seems to remember every plant, bush and tree that spurts above the ground in that cycle we think of as an invigorating parade of life, growth and death. And then resurrection, as earth currents explode with the annual biddings of new growth.

You can launch your kayak from the new landing in the heart of the refuge. Or you can hike the trails that unfurl through and around 11,000 acres of one of the loveliest pieces of real estate in our county.

Jackie Ferrier, refuge manager and her crew (along with volunteers — and funding — from the Friends of Willapa National Wildlife Refuge and the generous support of the Templin Foundation and the National Fish and Wildlife Foundation) are responsible for the Overlook.

“The overlook is a perfect example of what the refuge and friends can accomplish together,” Ferrier said.

There is so much more. In recent years, century-old dikes have been removed. With that exchange, we have seen a natural landscape blossom. Or just as importantly, nature has reshaped itself to represent a waterway that supported the First Peoples for thousands of years and continues to support us today. In a sense, this vast expanse of land and water is a time machine in the making.

So park your vehicle on 95th Street east of Sandridge Road near the PUD headquarters. Take the short walk to the outlook and marvel. Pack a lunch and watch the tides rise and fall like the beating of a great heart. Watch the evolution of wind and water and the imagination of later-day pioneers who have begun to reclaim Eden, right here on our beloved Willapa Bay.