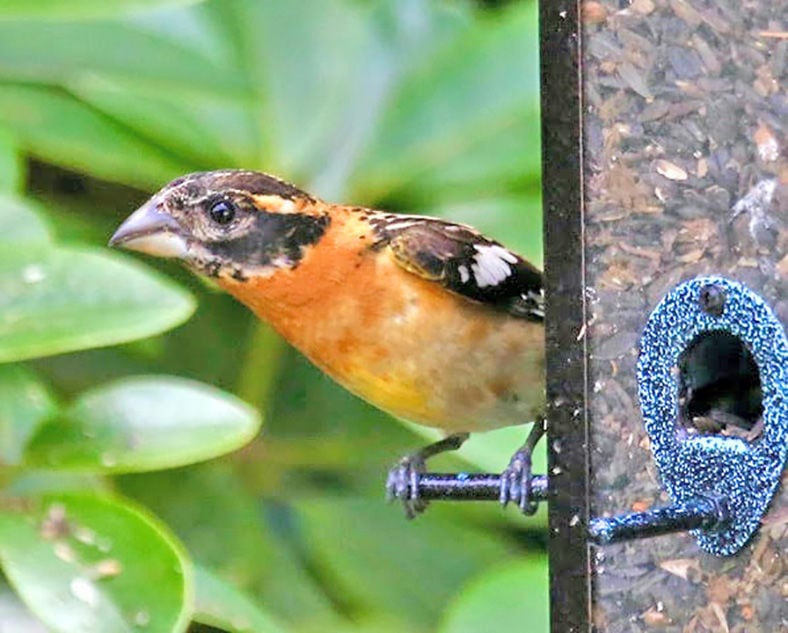 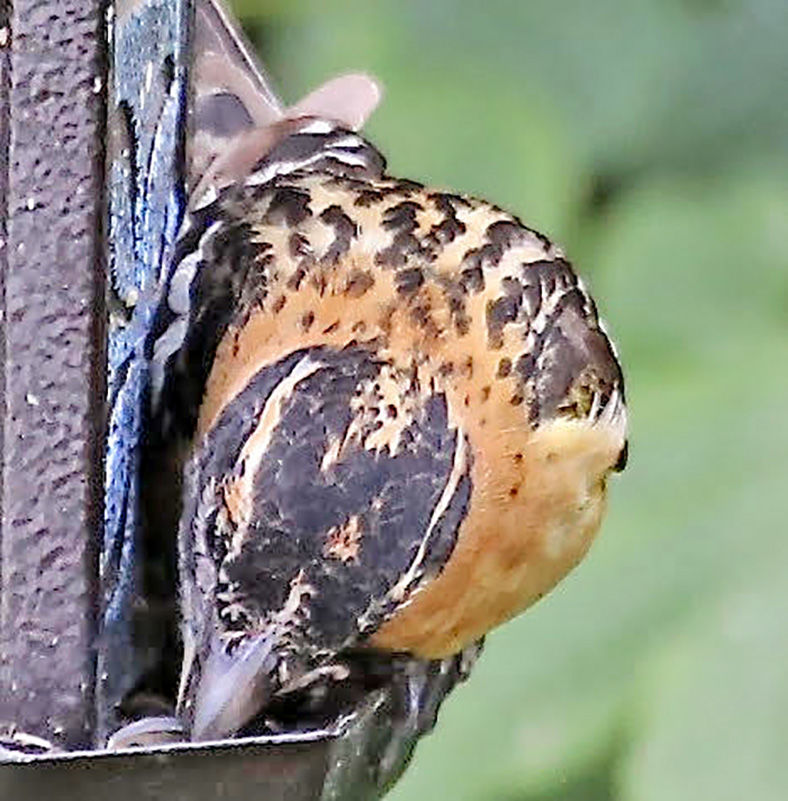 A male black-headed grosbeak bends down to open a sunflower seed in a birdfeeder. 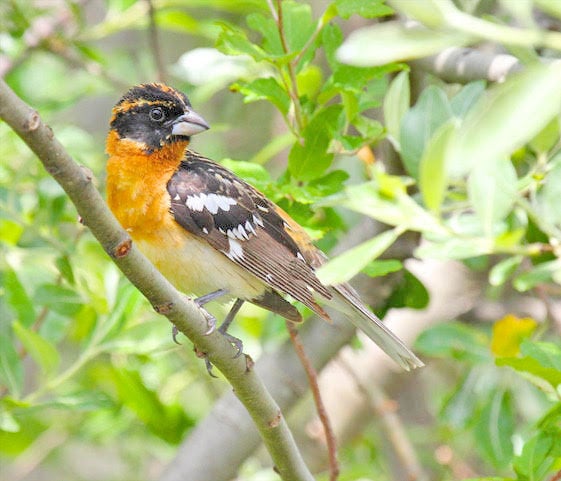 In keeping with the pattern of most bird species, the male black headed-grosbeak is more colorful than the female.

A male black-headed grosbeak bends down to open a sunflower seed in a birdfeeder.

In keeping with the pattern of most bird species, the male black headed-grosbeak is more colorful than the female.

A few days ago I received a note and some photos from a Peninsula birder. He had seen a bird that he said, was “a feast for the eyes.” He and some of his friends reported sighting a black-headed grosbeak, a bird some had not seen before or had only seen it a few times over the years.

The black-headed grosbeak is uncommon on the Peninsula which means it is present, but not certain to be seen. In addition, it is also uncommon in Pacific County. Furthermore, the black-headed is not easy to find because it often sings from dense cover like a leafy bush or from very high in a tree. Its preferred habitat is the woodlands with brushy under story, brushy riparian areas nearby and brushy open areas. Thus, it is no wonder that the black-headed grosbeak was referred to as a “feast for the eyes.”

The black-headed grosbeak is a medium-sized, seed-eating bird in the same family as the northern cardinal, the Cardinalidae. Black-headed grosbeaks love to come to backyard feeders, especially if the menu features black-oil seed. As you can guess from their name, (grosbeak), they have large, stout, conical shaped bills which are adept at cracking larger seeds like the black oil sunflower seed. Their beaks are also well suited for cracking hard-shelled insects such as beetles or snails. About 60 percent of their diet includes insects, spiders etc. Berries and seeds comprise the rest of their diet. During the summer they have been known to come to oriole feeders for nectar.

This species enjoys taking a bath and getting a drink. Thus, a bird bath is an invaluable addition to the backyard, not only for attracting the black-headed grosbeak, but for other garden visitors as well.

The black-headed grosbeak’s song is robin-like, melodious and warbling, but it sounds like a very lazy robin. It is also one of the species where the female is also a singer, but according to the scientific evidence she is not as accomplished a sing-er as the male. Her version is a simplified one. Perhaps we could say, that its song is a “feast for the ears”!

Another reason for being a “feast for the eyes” is the male grosbeak’s magnificent, and rather flashy, wardrobe. He has an all-black head, a rich orange collar, light orange breast, two large white wing patched that flash white in flight and two white patches on the corners of its tail which are also particularly noticeable when it flies. The female is more drab, but beautifully and modestly dressed. She is mottled brown and tan overall with white eyebrows and a white head line. Her wing-bars are white and narrow. She is well camouflaged for incubation and protection of the young in the nest. In general, the Cornell Ornithological Lab de-scribes this bird’s overall shape as being hefty or chunky looking which is largely due to its large head and short thick neck.

It seems from the reports I have been receiving that more of us are seeing the black-headed grosbeak this summer than is usually the case. Maybe they know that many of us are in isolation due to covid-19 so they have decided to help make our day more interesting and entertaining by appearing in our backyards. I’d like to think this is true! They are indeed, a feast for the eyes.