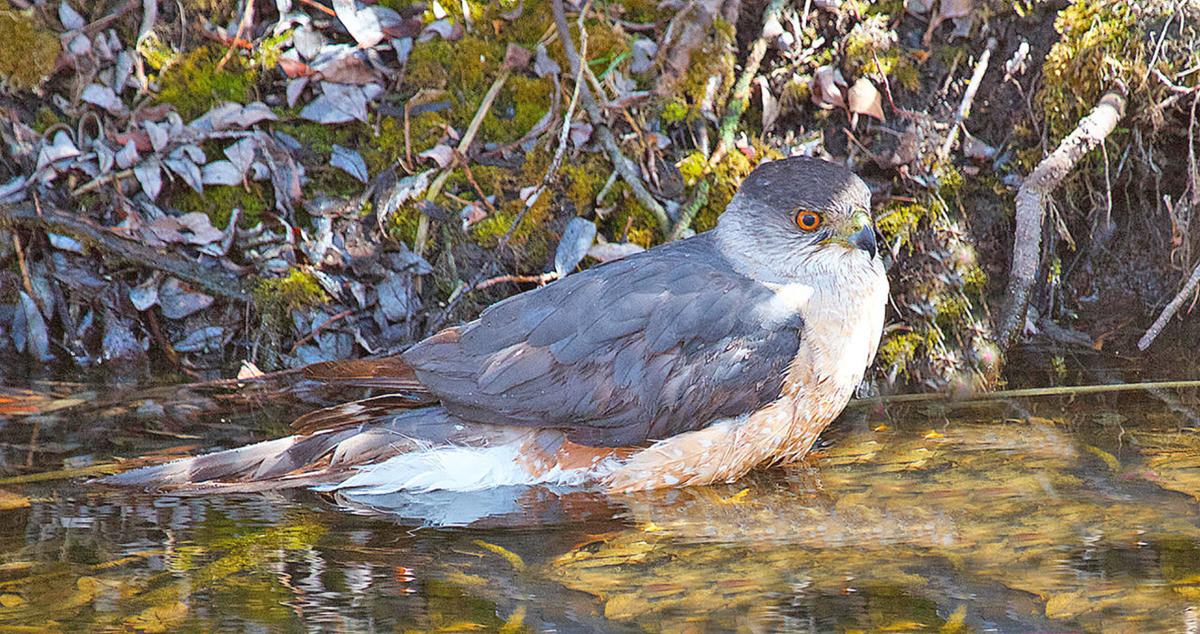 Cooper’s hawks in the West more commonly eat small mammals, but will also take medium-sized birds as prey. This Cooper’s is taking a bath in a small stream at the edge of a woodlot. 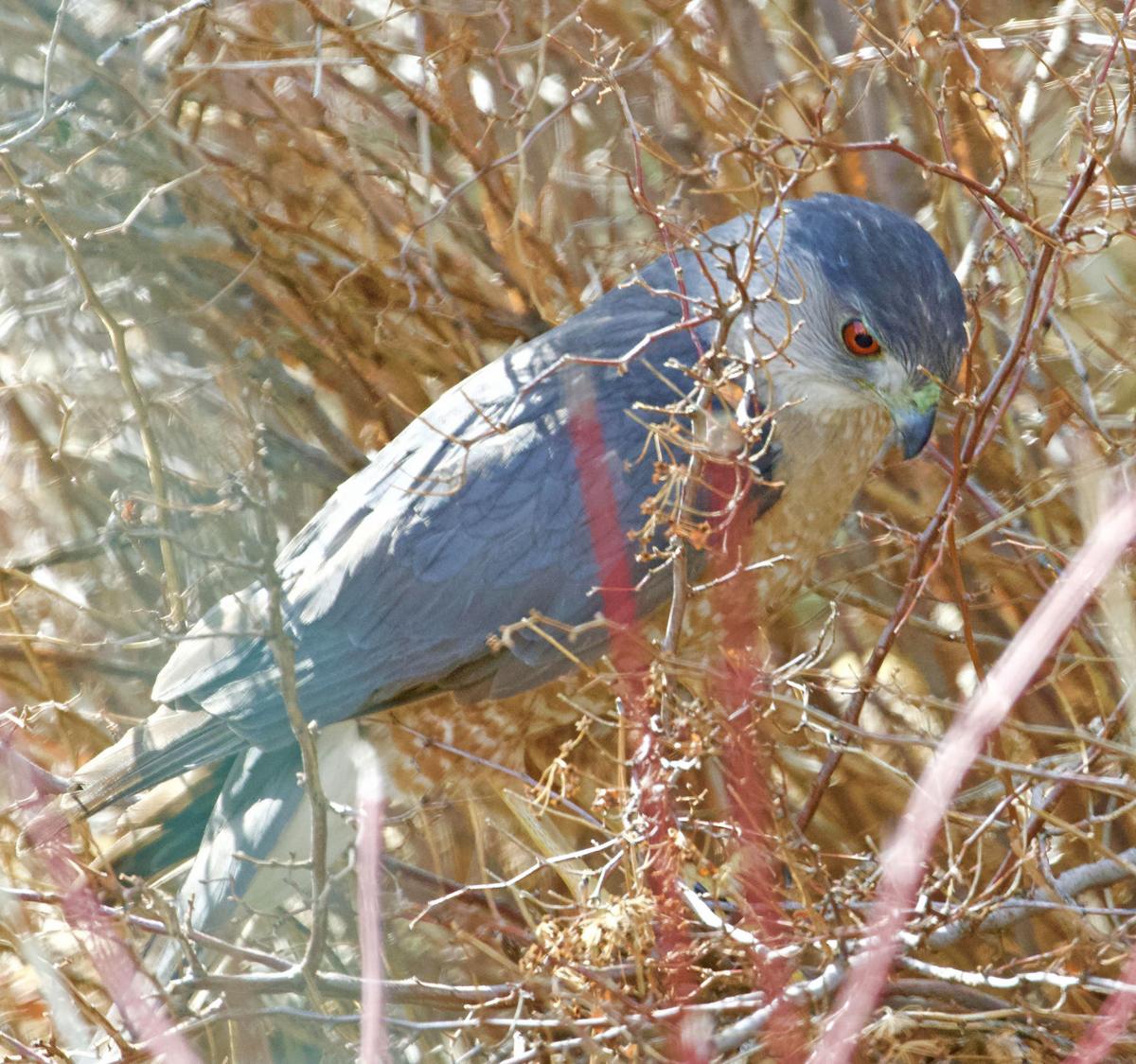 A Cooper’s hawk keeps the lookout from its perch in the Spirea bushes. 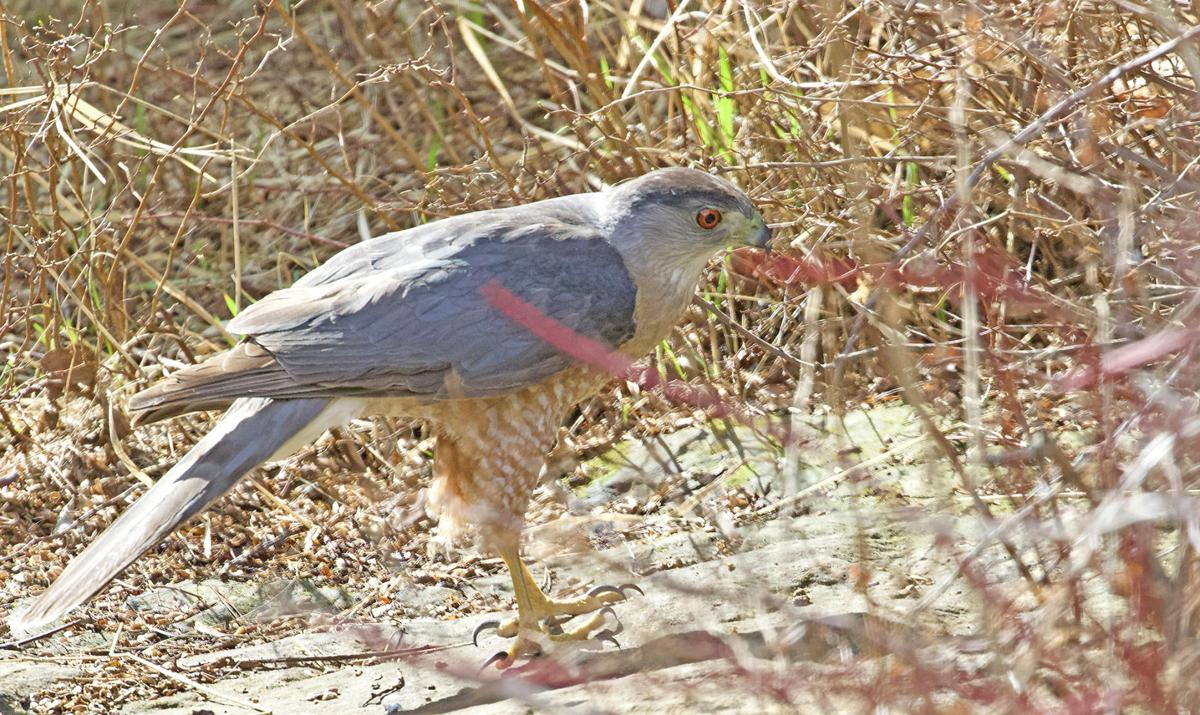 The Cooper’s hawk has a long tail and relatively short wings. 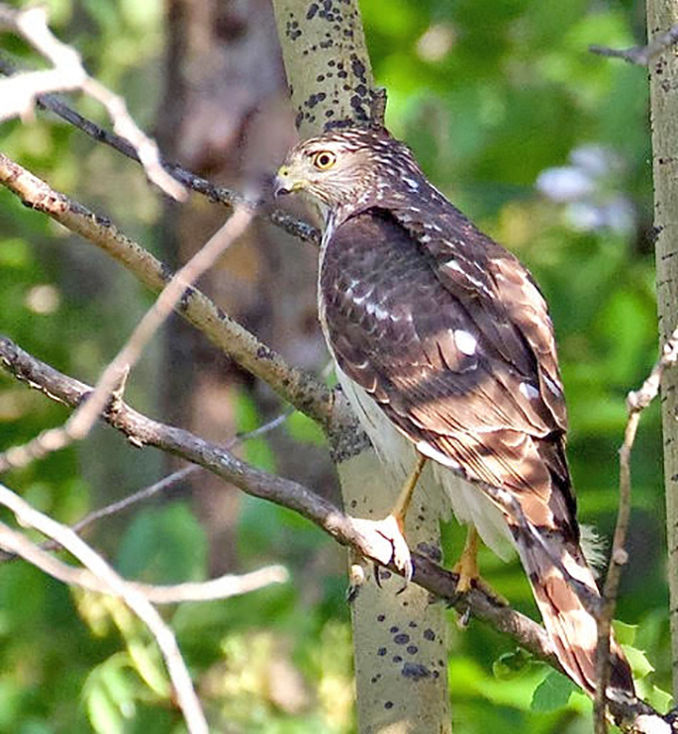 An immature Cooper’s hawk perches on a branch.

Cooper’s hawks in the West more commonly eat small mammals, but will also take medium-sized birds as prey. This Cooper’s is taking a bath in a small stream at the edge of a woodlot.

A Cooper’s hawk keeps the lookout from its perch in the Spirea bushes.

The Cooper’s hawk has a long tail and relatively short wings.

An immature Cooper’s hawk perches on a branch.

The other day I was reminded of the automobile ad where a small child says “zoom, zoom” as a particular brand of vehicle whizzed by on the road. Out of the corner of my eye I saw a bird zoom, zooming around the yard. It traveled like the speed of light as it darted in and out of the dense Spirea bushes. Clearly, it was on the hunt for lunch!

Close inspection revealed a Cooper’s hawk perched on one of the branches near the edge of the Spirea bushes. Because there are many bushes, together they form a fairly large and dense area of vegetation on the west side of the garden. Thus, sparrows and other small songbirds often try to hide in it from predators such as hawks when they are in the vicinity. Cooper’s hawks and sharp-shinned hawks often visit yards with feeders. I think they must think it is “easy pickins” as they say, and in some cases, where there isn’t any dense cover for the small birds, it may be. In my yard, however, the “pickins” aren’t so easy! Dense cover means that the sharpies and the Cooper’s are very seldom successful in securing a tasty meal in my backyard.

The Cooper’s hawk is adept at navigating its way through dense foliage or forests when hunting on the wing. It will also perch in concealed locations from which they try their hand at capturing small to medium sized birds. It is their swiftness of flight that allows for success on the attack when it spots a potential victim for lunch. It is definitely an agile flyer and uses it talons to snatch prey. While medium and small birds are relished by most Cooper’s hawk, Cooper’s hawks in the west tend to favor small mammals such as squirrels, mice and chipmunks.

The Cooper’s hawk is a member of the genus of birds of prey in the family Accipitridae. Thus, it is called an accipiter. One of the Cooper’s best field marks is its shape when flying overhead. It, for all the world, looks like a “flying cross.” Birders use this description because its head extends forward well beyond its short wings and its tail is long.

Watching the Cooper’s zooming around the yard was quite the experience. On the one hand, I wanted to cheer it on, but on the other I didn’t want it to snatch any of the feeder birds with its strong, sharp talons. On other occasions, it used the fence as a vantage point from which to check out the feeders, trees, shrubs and bushes. To date the Cooper’s Hawk has never managed to snag its lunch when I was looking. As long as this remains so in my yard, the Cooper’s Hawk can zoom, zoom to its heart’s content. To be sure, it adds to the joy of birding!