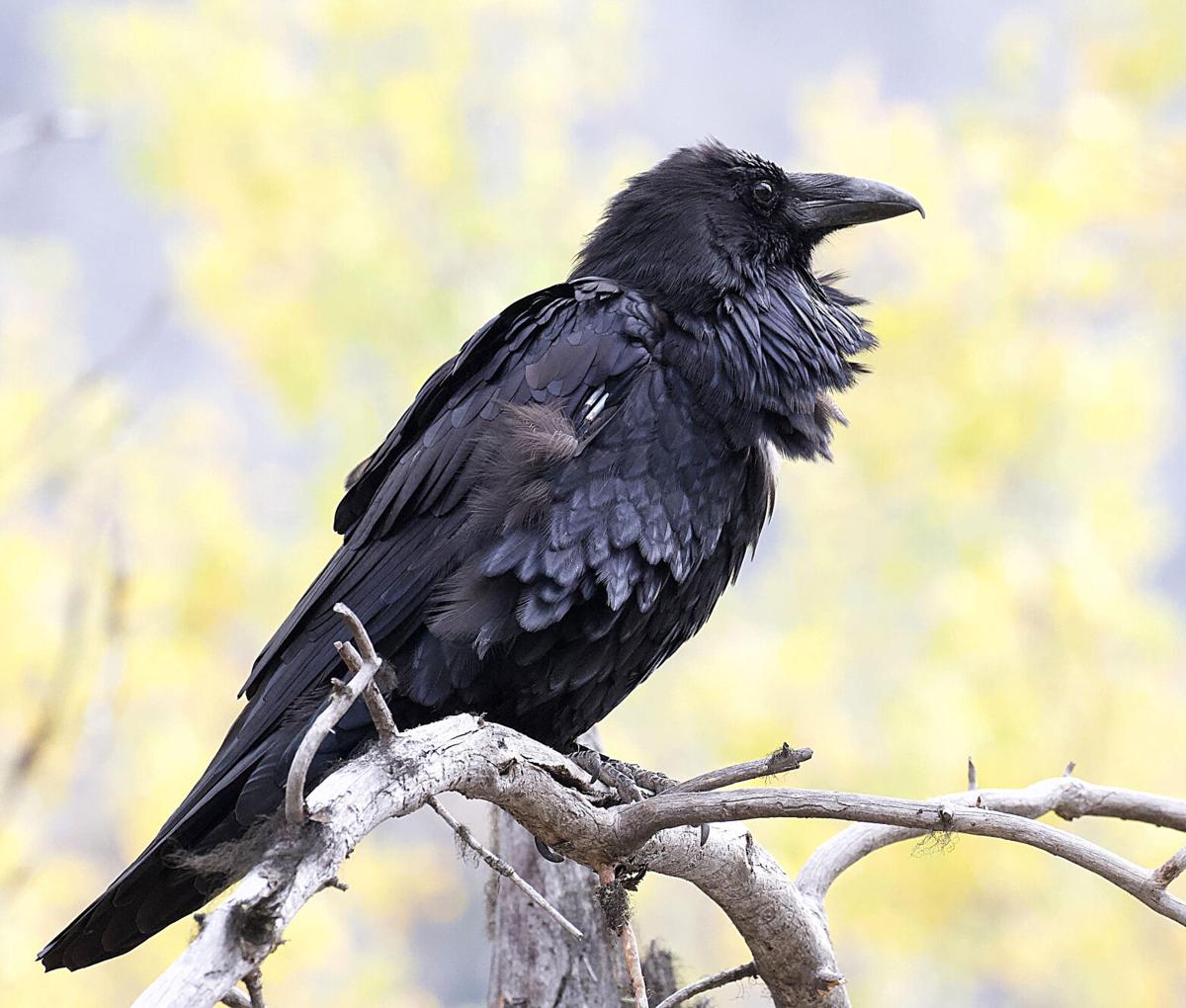 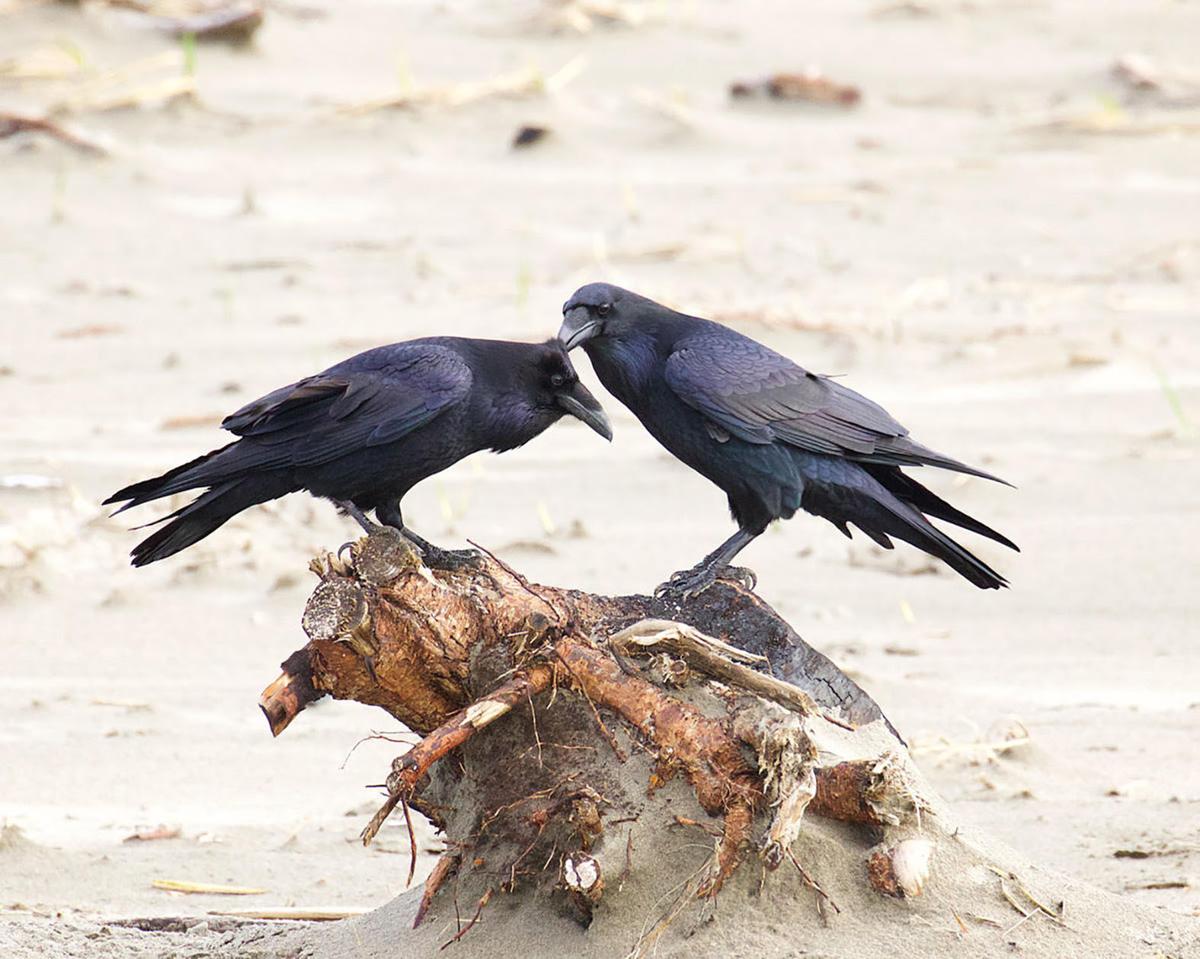 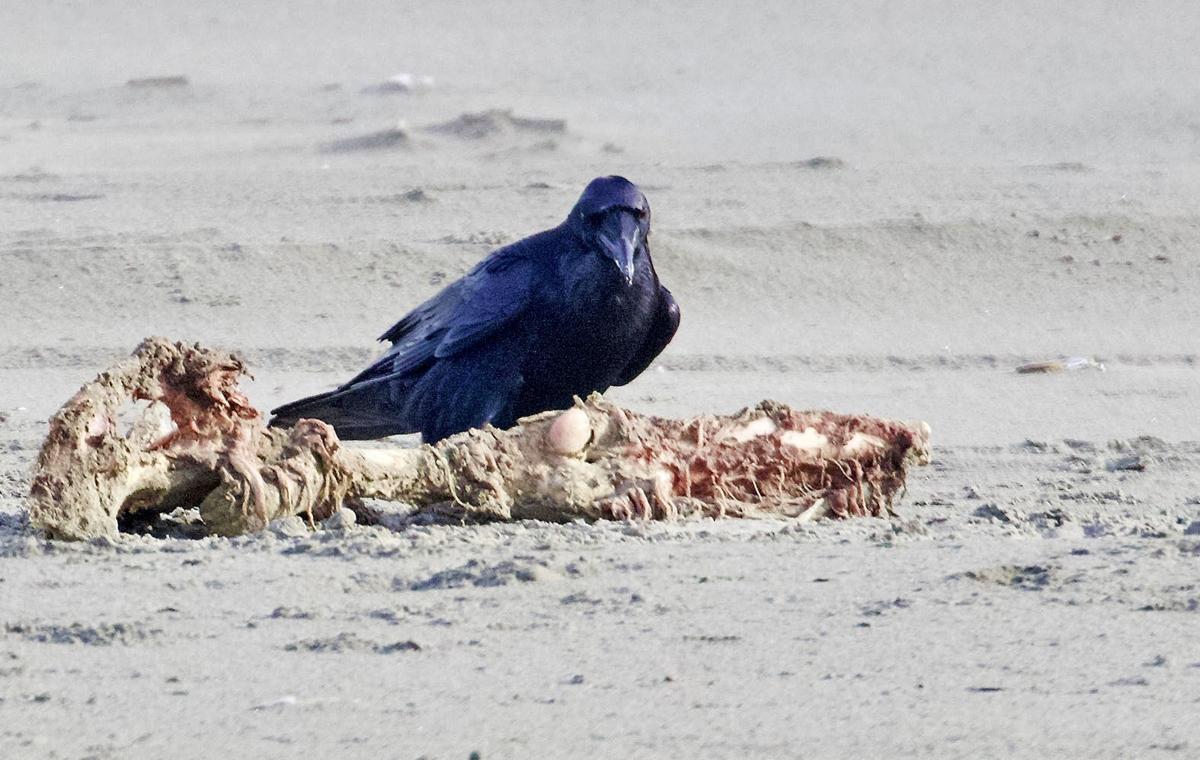 Raven are scavengers and carrion eaters. This raven is feasting on an elk carcass it found on our ocean beaches. 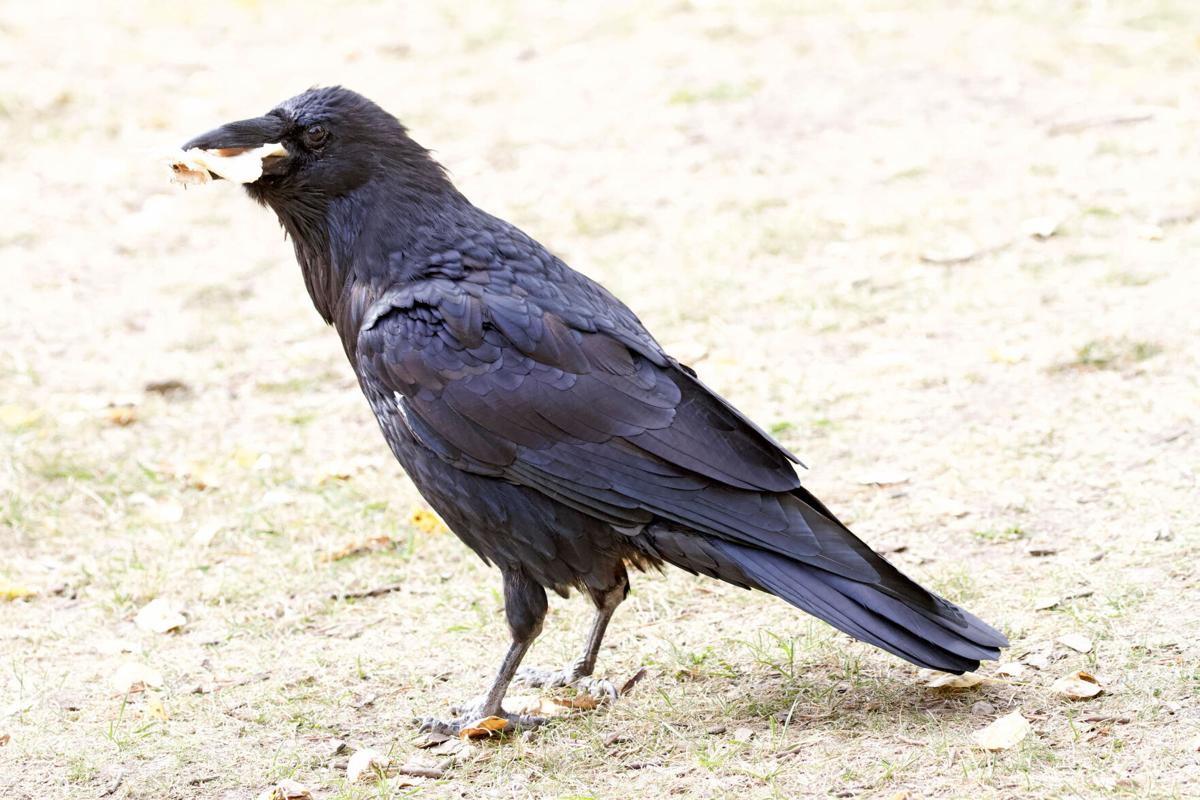 The raven will eat almost anything it can swallow!

Raven are scavengers and carrion eaters. This raven is feasting on an elk carcass it found on our ocean beaches.

The raven will eat almost anything it can swallow!

American crows and common ravens belong to the group of birds called corvids. Thus, they are related and, therefore, similar.

Because of this fact they are not always easy to distinguish but paying close attention to some of their characteristics makes the task easier. The voice of each, for example, is a good ID marker. Ravens give a deep throaty ‘kronk’ or ‘wronk,’ while crows give a rather high-pitched caw, and when flying, ravens often utter a melodious gargle. Ravens and crows are some of the most intelligent and innovative birds on our planet. New research published in Science (September 2020) a few weeks ago confirms that crows know things and can think about what they know. Research underlines the idea that “crow, ravens and other corvids … have long impressed scientists with their intelligence and creativity.” (Science: September 2020, Sibley, 2020)

Stopping for a few minutes or longer while driving or walking the beach when you see a crow or raven can be a worthwhile and interesting experience. Ravens, for example, might be seen engaging in what Sibley (2020) calls mutual preening of their head feathers. He suggests that this may be the way this species “keeps its head feathers clean and straight.” I have seen this behavior many times on our Pacific beaches. Birds preen to keep their feathers clean and straight using their bills but cannot preen their own head feathers with their beaks. Thus, some birds will use their feet for head preening, while others like the raven will engage in mutual preening.

Another behavior to look for is the raven’s courtship ritual. Watching it is like going to an airshow. The male performs acrobatics in the sky doing almost anything to impress a female. as it swoops and dives and performs barrel rolls. I have even seen it fly upside down! I first witnessed this behavior on a trip to the Yukon to photograph the Aurora Borealis/Northern Lights. Several males were performing hoping to grab the attention of the females in the area. It was almost like watching the Blue Angels or the Air Force Thunderbirds perform at an airshow. The ravens put on an impressive performance. It is no wonder that the raven is the official bird of the Yukon Territory.

The raven is common can be seen in our area year round. It is a permanent resident and a nesting species. It is a scavenger and carrion eater and as such will eat virtually anything it can swallow. The female is the nest builder and uses fresh sticks for a nest which she places in a tree, on a cliff or in a rock crevice. For the last three years a raven has come into my yard each spring to pick up its quota of sticks by breaking fresh branches off a sea buckthorn tree. It must be a very clever bird. The branches of this tree have thorns. Perhaps it is thinking that these special sticks will help keep predators at bay.

The raven has a stately appearance which seems to help advertise its smartness. Its glossy jet-black coat, shaggy neck feathers and large bill further accentuate the fact that it is an intelligent bird. While this article mainly focuses on the common raven, other corvids such as the American crow, Steller’s jay and western scrub-jay are also considered to be intelligent and can no doubt think about what they know just like our raven. I, for one, will take a closer look at all of our corvids when I go birding. However, for me, the handsome looks of the common raven along with its intellect, makes it one of the most endearing of the corvids. It definitely holds a special place in my heart.

She wasn't infected. Why she almost lost her life because of Covid-19