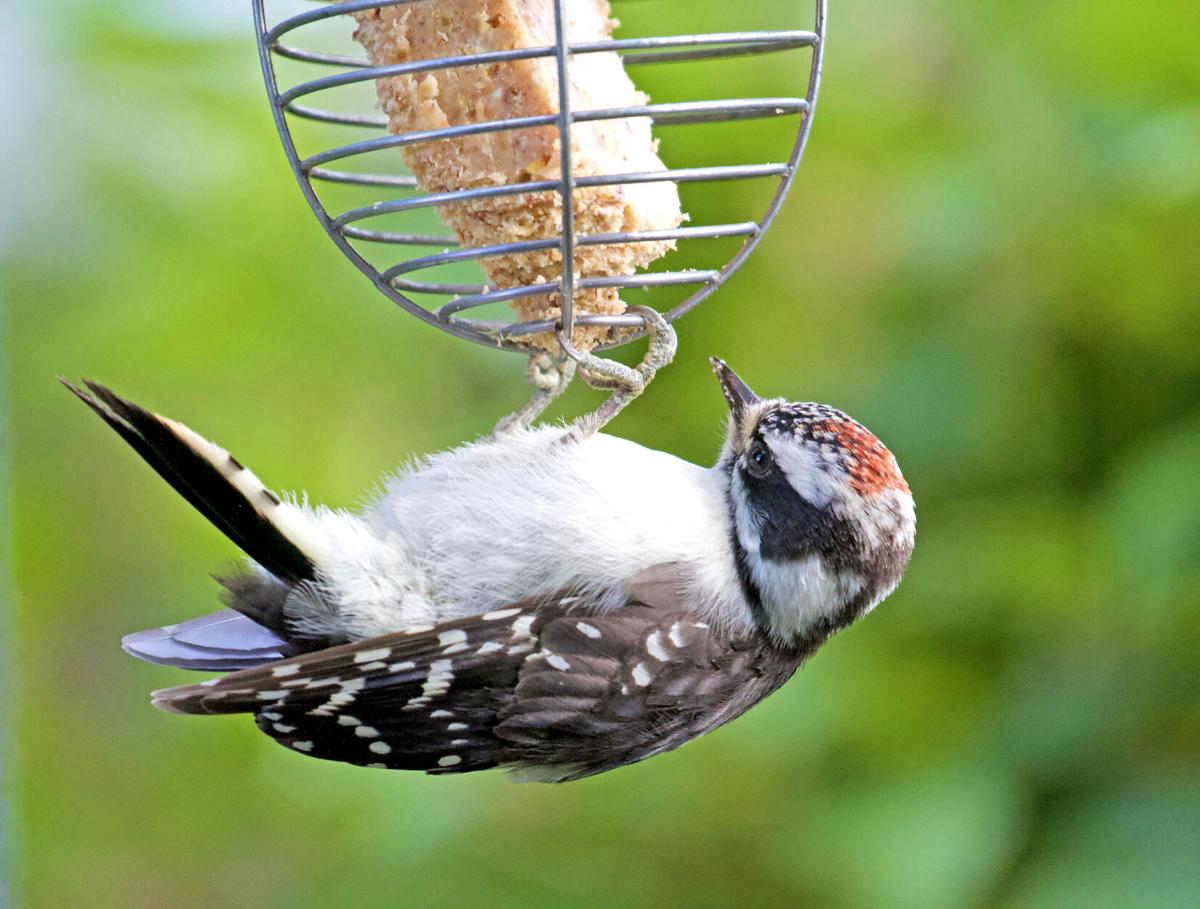 An acrobatic fledgling downy woodpecker clings to the bottom of a suet feeder. 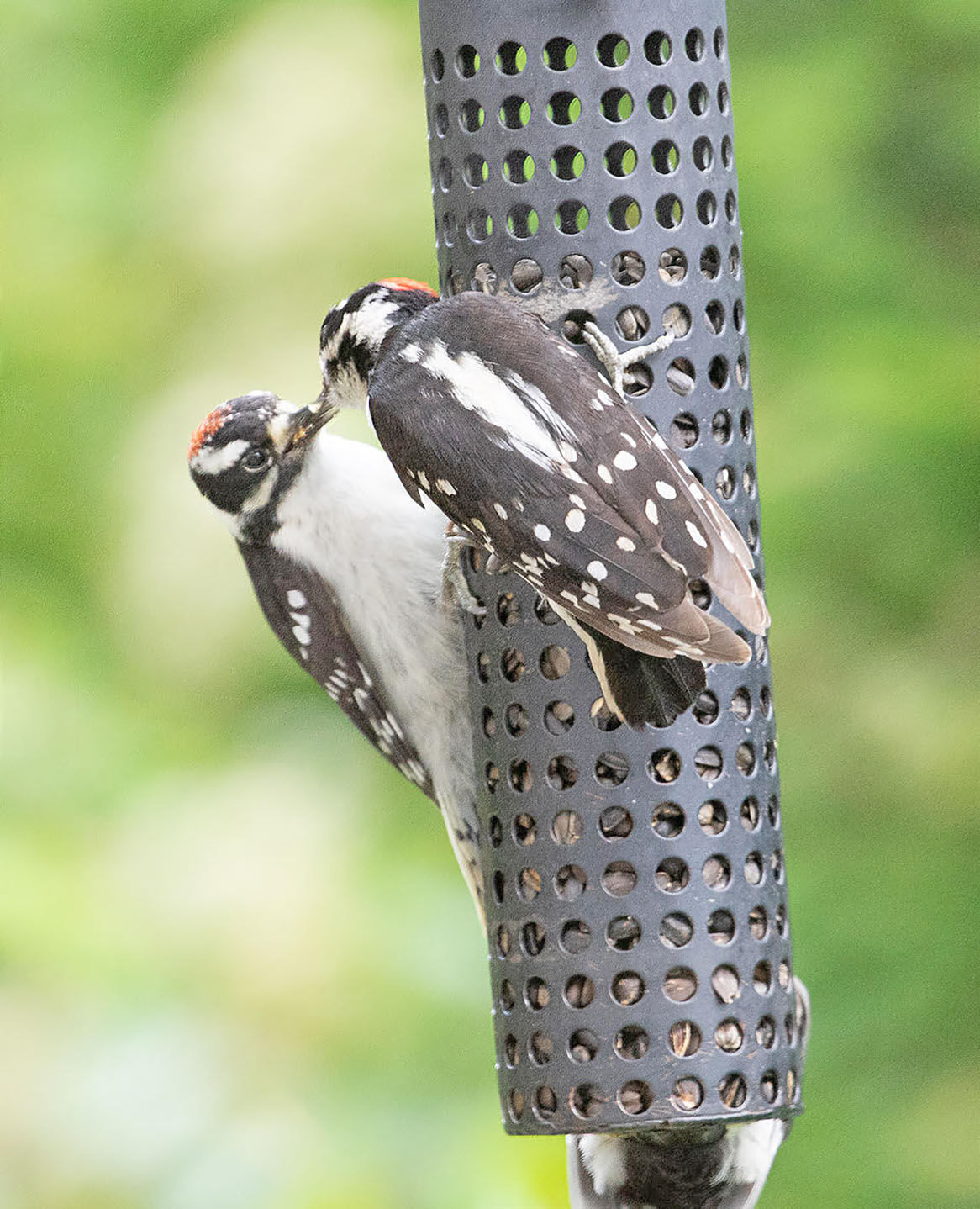 A male downy feeds one of his fledglings. 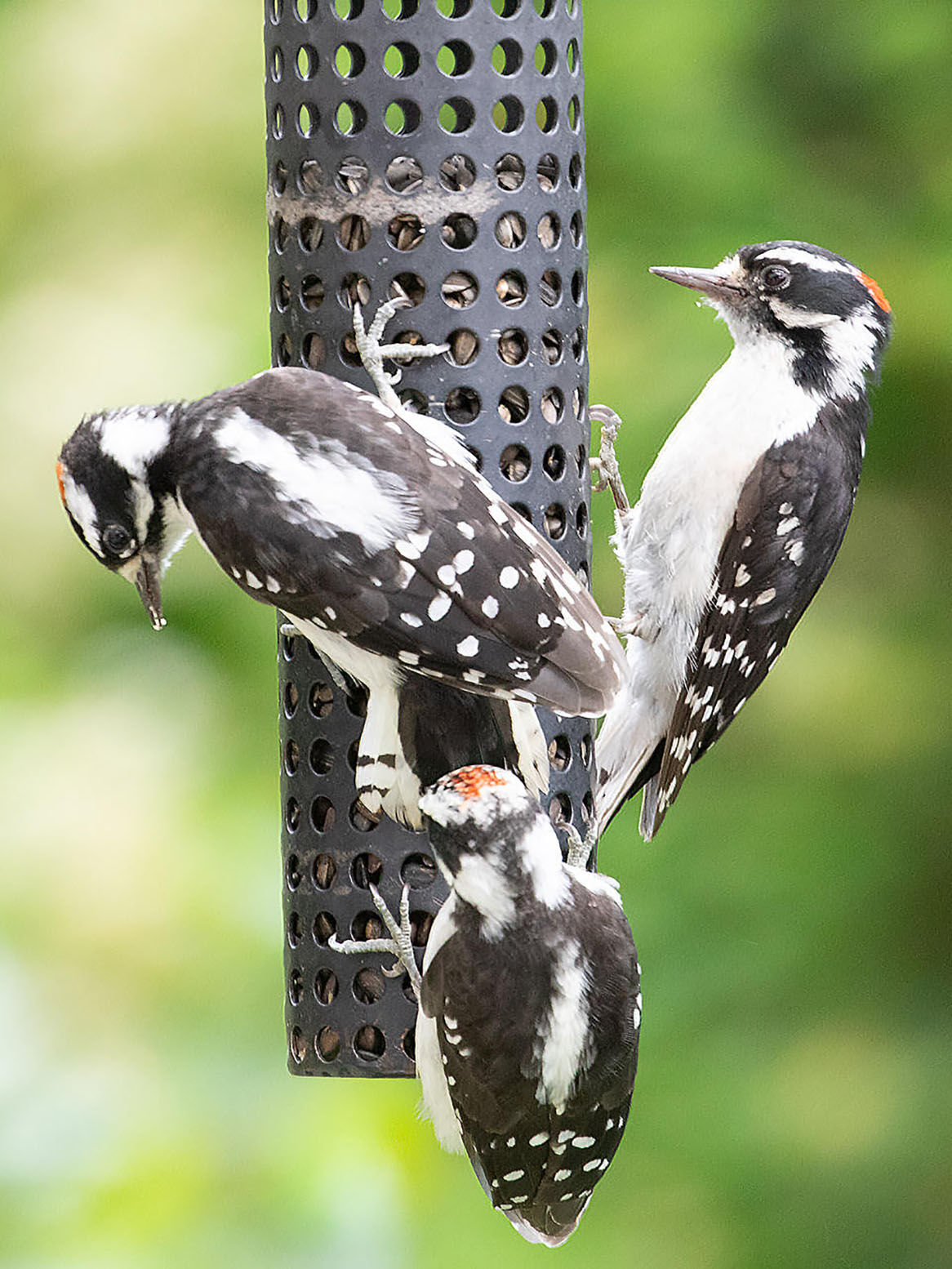 Two fledglings and their male parent chow down on the black oil seed feeder.

An acrobatic fledgling downy woodpecker clings to the bottom of a suet feeder.

A male downy feeds one of his fledglings.

Two fledglings and their male parent chow down on the black oil seed feeder.

For the past two weeks suet filled with insects and mealworms was no longer a hot commodity. The species that favor it were no longer coming to the yard. They were hanging out in the location of their nest as their babies prepared to fledge. As I predicted in a previous article, the insect laden suet would become a hot commodity again!

To my surprise, Sir Downy Woodpecker arrived today with two of his fledglings in tow. Two days ago he arrived around 1:30 in the afternoon to scout out the suet feeder, but it was empty! Yesterday, Madam Downy scouted it out at precisely the same time, 1:30 p.m. Once again, it was empty. Insect suet was put out as soon as the downies were spotted, but the house sparrows demolished it all before they had a chance to dine. So today, I wondered what would happen if I waited to fill the suet feeder until 1:25 p.m.! I went with my instincts and filled it. At precisely 1:30 p.m., Sir Downy and his family appeared.

Downy woodpeckers are the smallest of the North American woodpeckers. Size-wise, they are between a sparrow and a robin. Thus, they are smaller than the look-alike hairy woodpecker. They move around tree branches and trunks with a hitching motion as they hunt for tasty insects hiding in the bark. Their undulating flight is distinctive and characteristic of most woodpeckers.

Downy woodpeckers are quite at home in urban areas and backyards. In addition to loving insect laden suet the downy also enjoys small black oil seeds (sunflower), and it isn’t unusual for them to take a drink from a hummingbird feeder. A bird bath also serves as an attraction to a thirsty downy.

But I digress, from today’s adventure. Sir Downy and his two babies, both males with just a touch of red on the back of their heads. First, they flew one by one to the black oil seed feeder hanging on until Dad arrived. Once there, he cracked the oil seeds and fed each of his sons. You could just tell that they loved those tasty morsels. After a few tastes the fledglings each began to peck the seeds on their own. Sir Downy was an excellent role model for his babies.

After a short recess they moved on to the suet. Once again, Dad gave his fledglings a few taste treats. It wasn’t long before they could take advantage of the suet feeder by themselves. Once that lesson was learned, another recess was taken. The downies are coming and going from the feeders now on their own. However, lessons on tree bark continued, as Dad hitched around the tree trunk to find insects which he promptly fed to the babies.

It is interesting that Madam Downy isn’t around today. Perhaps she is occupied with other fledglings. After all, a downy woodpecker’s clutch can be anywhere from three to eight eggs in size. I know that Madam Downy loves the insect suet too, after all, she did check it out yesterday. I am hoping that she might come tomorrow with one or two fledglings.

It is now 4:30 p.m. and the downies are still in the yard. I can hear their whinnying as I sit at the picnic table writing about them. I can see that the fledglings are feeding on their own now. I haven’t seen Sir Downy for a while now. His charges have learned that this yard is a bird’s paradise. It has clean water for drinking, black oil seed for a treat and of course, suet filled with insects. What more can a fledgling ask for? It looks like Sir Downy has said, “Bye, Bye, Babies, Bye, Bye.”

US death toll climbs as Trump claims coronavirus under control

UK to roll out millions of 90-minute tests. Doctor says US could do the same