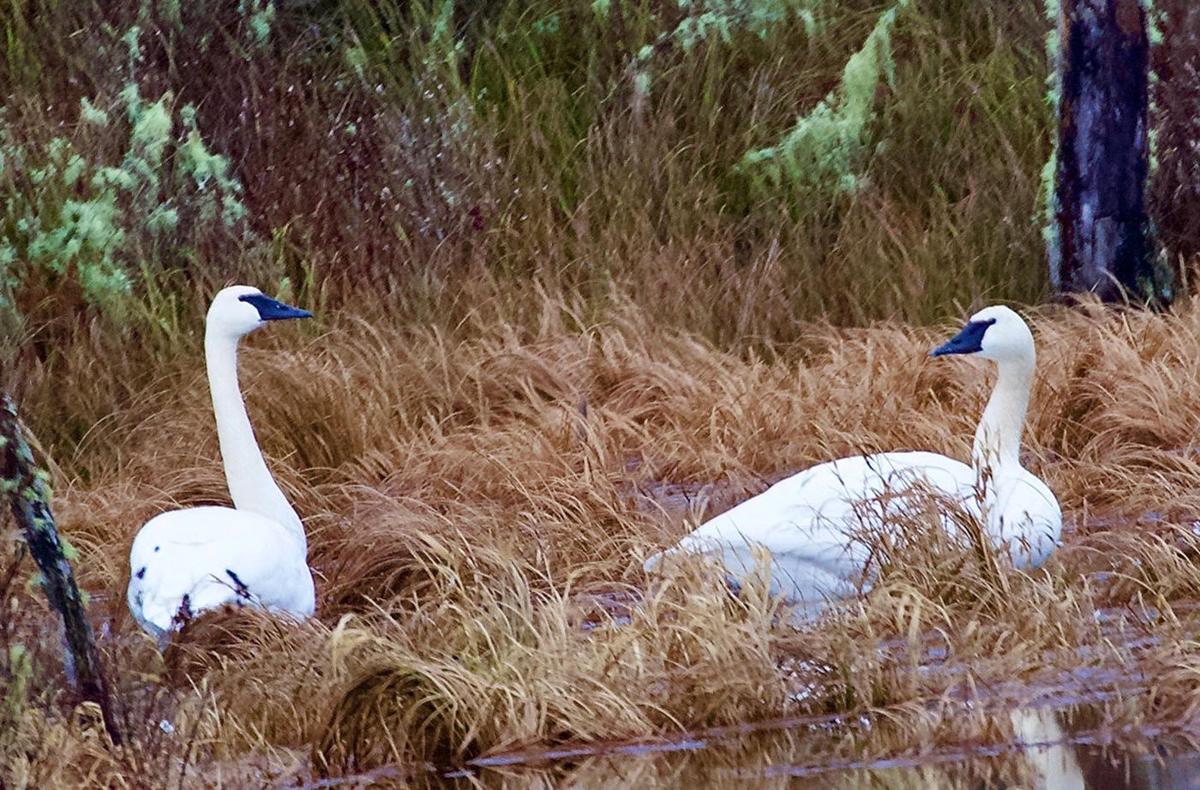 These adult trumpeter swans are the largest waterfowl in the world. 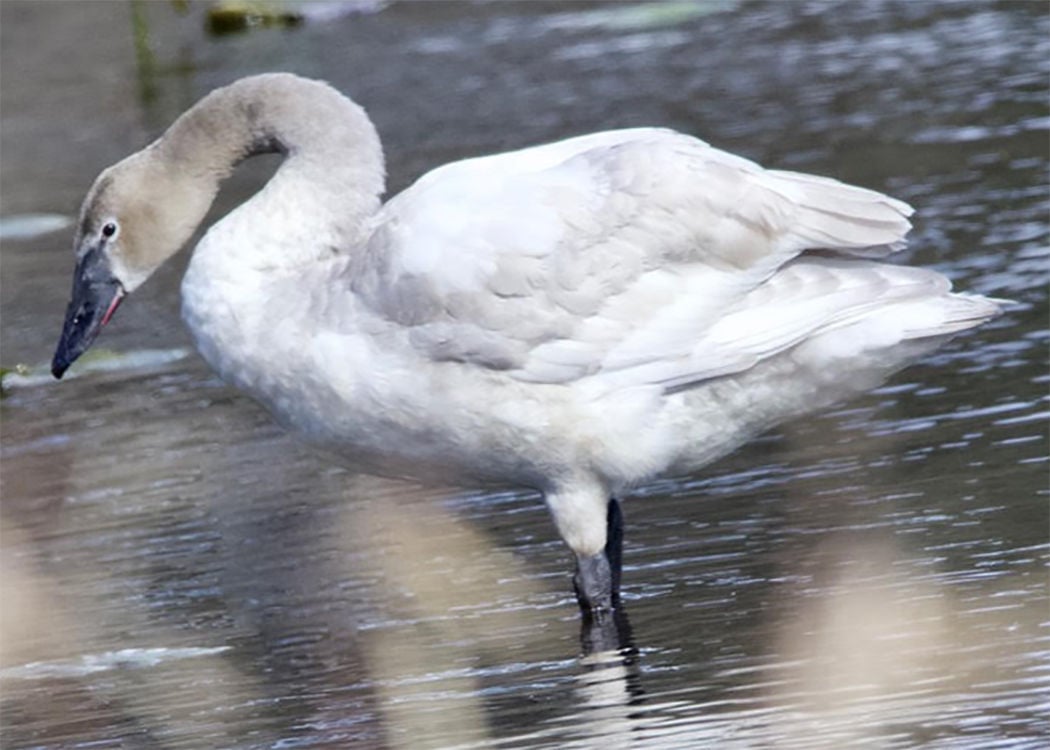 Trumpeter swans have a red border on the lower mandible of their black bill.

Sometimes ducks, like these ring-necked ducks, join feeding swans to glean vegetation and feed on the insects they disturb.

Juvenile swans are grayish-white during the late winter months.

These adult trumpeter swans are the largest waterfowl in the world.

Trumpeter swans have a red border on the lower mandible of their black bill.

Sometimes ducks, like these ring-necked ducks, join feeding swans to glean vegetation and feed on the insects they disturb.

Juvenile swans are grayish-white during the late winter months.

A pair of trumpeter swans have been with us for most of the winter. They are busy foraging and resting in a wetland on 227th, and have been in the same wetland now for months.

Whenever I see them, they are foraging like there is no tomorrow. Goodies must abound for them to feast on and that is what has likely encouraged them to overwinter with us and to stay in the same area.

These elegant birds are the world’s largest waterfowl. Their wingspan ranges from seven to eight feet and they are about five feet in length. They get their name from their distinct nasal call that sounds like a trumpeted single or double honk.

This pair of trumpeter swans are all white with a black bill and black legs. If you look closely you can see that the manner in which the eye meets the bill makes it look as though it has disappeared into the bill. On looking closely, you will also notice that the trumpeter has a large white forehead unlike its smaller counterpart, the tundra swan which has a relatively small white forehead in comparison. There is a red border on the lower mandible of the trumpeter, but if the tundra swan sports such a border, which it rarely does, it will be pink.

Last weekend, my friend Susan and I did the last of our Winter Raptor Surveys on the Peninsula. It was a very successful venture. We counted 29 bald eagles, five red-tailed hawks, four American kestrels, three northern harriers and one peregrine falcon. The day was glorious, warm and sunny by afternoon. It started out with frost on the beach. It looked like icing on a very large, chocolate, slab cake!

By late afternoon, we arrived at Black Lake, and there to our wondering eyes did appear a trumpeter swan feeding at the east end. It has been a few years since the trumpeters wintered over on Black Lake.

Being vegetarians, there must be a lot of tasty plants in any estuary or pond that a trumpeter chooses to over winter on. Their favorites include pondweeds, eelgrass, sedges, rushes, duckweed, wild rice and algae, according to the Cornell Ornithological Lab.

I checked on the swan yesterday, and it was still there sitting and foraging among the shiny, green waterlily leaves. Every once-in-a-while it would dip its head into the water as it searched for a snack. It was also busy preening its wings and back feathers. When preening it obtains oil from a gland at the base of the tail. In preening, it distributes the oil over its feathers to keep itself waterproof. Overall, this trumpeter swan seemed a little smaller than the two adults mentioned previously, and it was gray-white in color. It looked exactly the way the field guides describe the appearance of first year birds in late winter.

It pays to keep one’s eyes open when out for a drive or on the way to shop. You never know what you will see. It also pays to drive the back roads as well as the main ones. Have you seen the trumpeter swans yet? Hurry! Look for them! They will soon leave for their breeding grounds on the northern tundra. If you miss them you will have to wait until next year for them to appear again!

Dr. Birx: Not every American is following guidelines