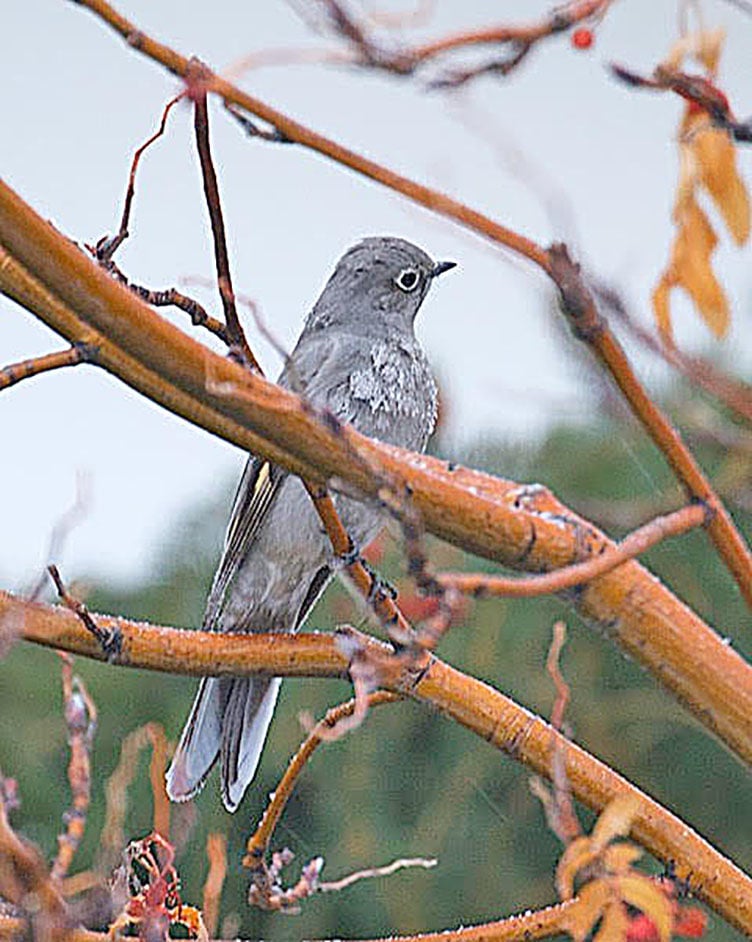 Townsend’s solitaire is a gray bird with a prominent white eye-ring, white outer tail feathers and a buffy wing patch.

Sanderlings are already beginning to show their breeding plumage. Their pale winter outfits are being exchanged for more colorful apparel. 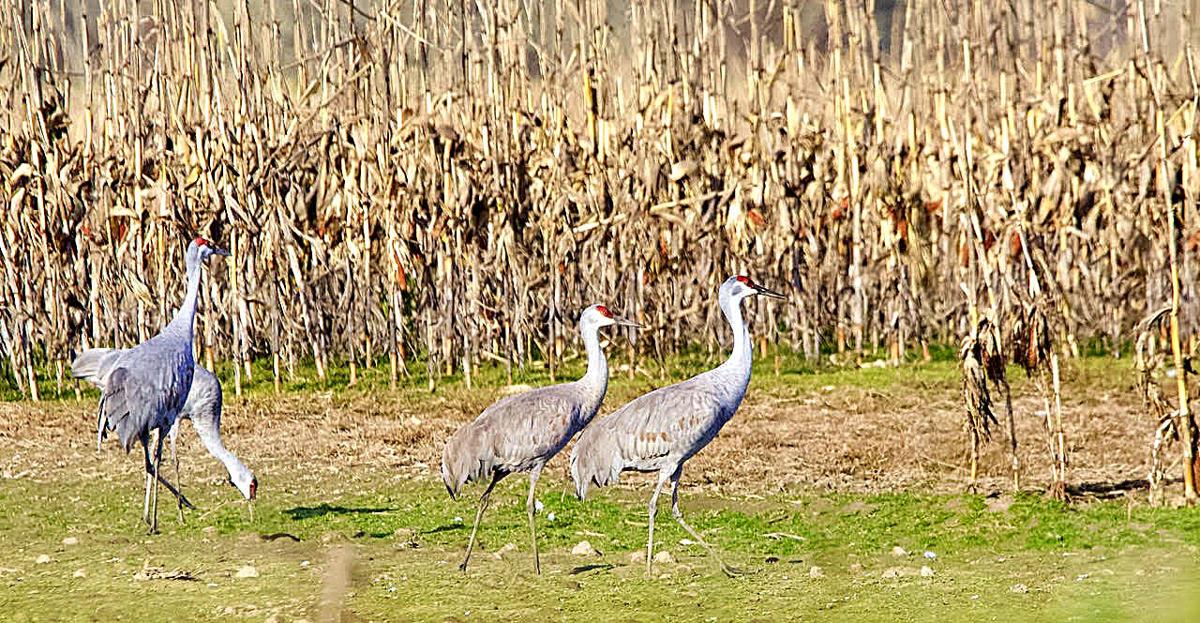 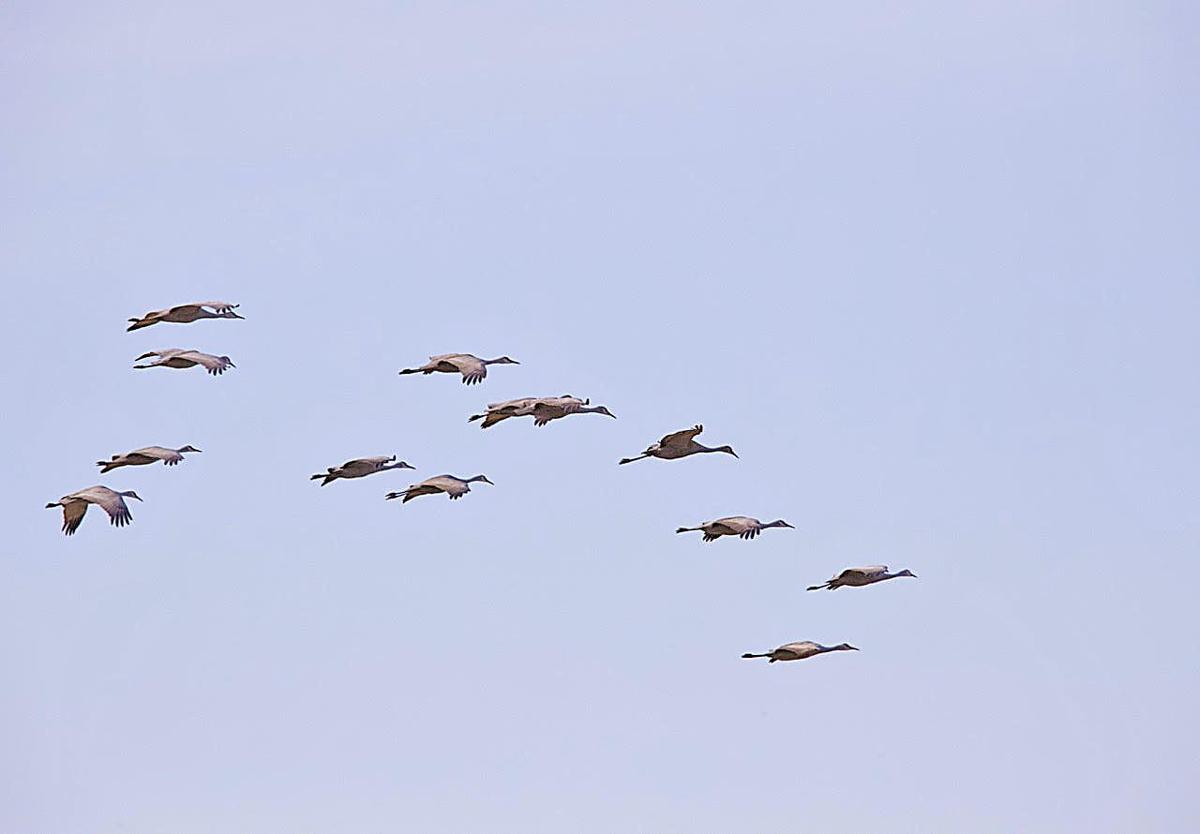 Sandhill cranes in flight near a refuge located outside Vancouver, Washington. 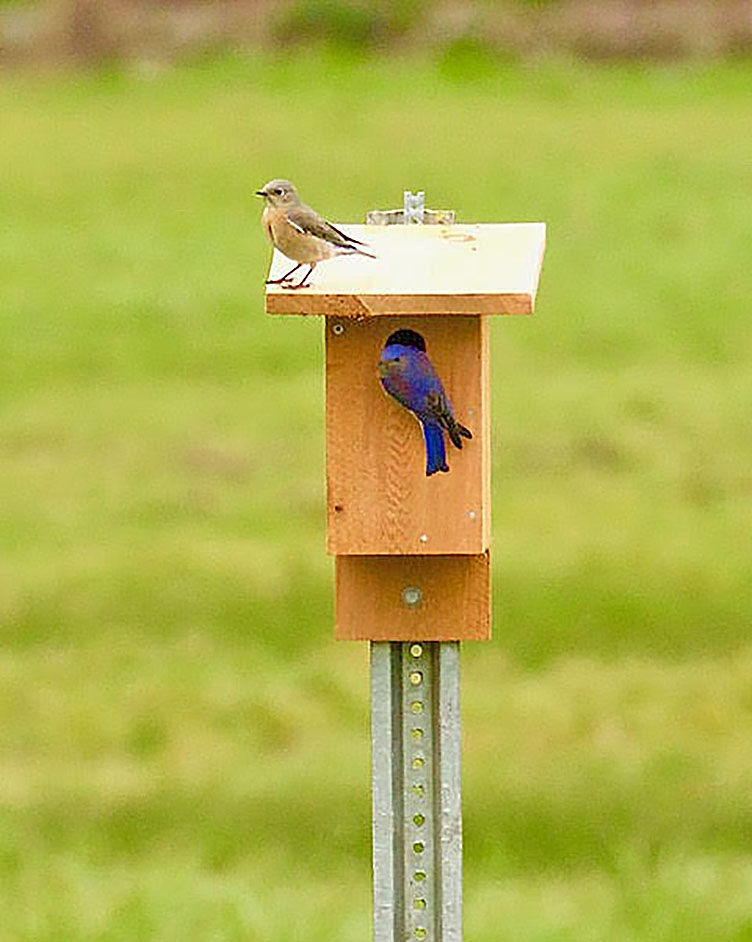 A pair of western bluebirds preparing to nest at Tarlatt. 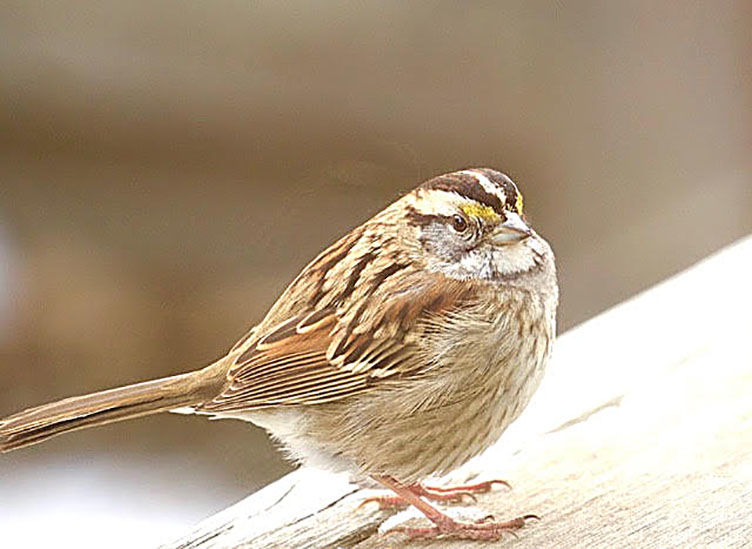 White-throated sparrows migrate through our area in both spring and fall.

Townsend’s solitaire is a gray bird with a prominent white eye-ring, white outer tail feathers and a buffy wing patch.

Sanderlings are already beginning to show their breeding plumage. Their pale winter outfits are being exchanged for more colorful apparel.

Sandhill cranes in flight near a refuge located outside Vancouver, Washington.

A pair of western bluebirds preparing to nest at Tarlatt.

White-throated sparrows migrate through our area in both spring and fall.

Some of the birds that we observe in April and early May are spring migrants. Shorebirds are one example. Thousands of these birds are just passing through on their way to their Arctic breeding grounds. Time is usually of the essence because of the short Arctic breeding season. They are on the move, but take time to gather on our beaches and the mudflats of Willapa Bay to feed on burrowing worms, clams, shrimp and amphipods. The best time to see these passers-by is two hours over the high tide. As the tide recedes it exposes the mudflats which are rich in nutrients making it the right time for shorebirds like sanderlings, western sandpipers, ruddy turnstones, dunlin and black-bellied plover to fatten up and regain energy for the next leg of their trip to the Arctic.

Other birds that are just passing through include the white-throated sparrow, Townsend’s solitaire and the sandhill crane. These three species are not usually with us in summer or winter. They are fall and spring migrants, and as such don’t stay with us during the breeding season or the non-breeding season. They just pass through on the way to their breeding grounds in the spring and their wintering grounds in the fall. Of course, they stay with us for a bit while they forage and rest before continuing their journey.

This was a lucky year because one white-throated sparrow wintered over in the backyard. It came to the bird baths and the feeders daily for the months of January and February. Being a sparrow, it is mainly a ground feeder, but this winter it also ate at the hanging feeders.

I have never seen a Townsend’s solitaire on the Peninsula, but it is classified as an occasional visitor in spring and rare in summer and fall. The solitaire is a grayish bird, a little smaller than a robin, and like the robin belongs to the family of thrushes. It has a prominent white eye-ring, white outer tail feathers and a buffy wing patch. Its diet consists of insects, moths, spiders, and butterflies during the breeding season. During the winter, however, berries become its main food source. Thus, if we were to look for the Townsend’s solitaire on the Peninsula this spring, we should concentrate on some of the bushes and shrubs that still have fruit dangling from their branches. I have only seen the Townsend’s solitaire in Calgary. It always appears during the month of April or early May. Every photo I have ever taken since I have lived in Calgary (29 years) shows the bird feasting on berries in the Mountain Ash tree. The berries on that tree hang on until the robins, Bohemian waxwings and the Townsend’s solitaire finish gobbling them all up!

Another species that just passes through on the Peninsula is the sandhill crane. They fly over us in both the spring and the fall on their way to their northern breeding grounds. As you know, thousands over-winter on the Columbia Land Trust property set aside for them in Vancouver, Washington. The majestic sandhill with its crimson cap is a sight to behold. It is family-oriented too. They migrate in the fall with their family in tow. I have had the privilege of seeing a family group on the Long Beach Peninsula foraging together, but only once since 1992. Even though they breed in open fields, wetlands and the like all over North America, to date there are no nesting records for the Long Beach Peninsula. In essence, then, it seems as though they have just been passing through.

One other species that is of great interest to me is the western bluebird. You may recall it nested at Tarlatt a few years ago. I saw it twice during the years before it nested at Tarlatt, but since then I have not seen one of them in the Spring. I hope though that they have been passing through, and I just missed seeing them. I always hope to see them again at one of Tarlatt’s nest boxes, just as I hope to see white-throated sparrows, a Townsend’s solitaire or two and a family of sandhill cranes. Keep your eyes high and wide, and you may see these spring migrants this year. What a treat that would be!

Dr. Birx has a warning for rural Americans