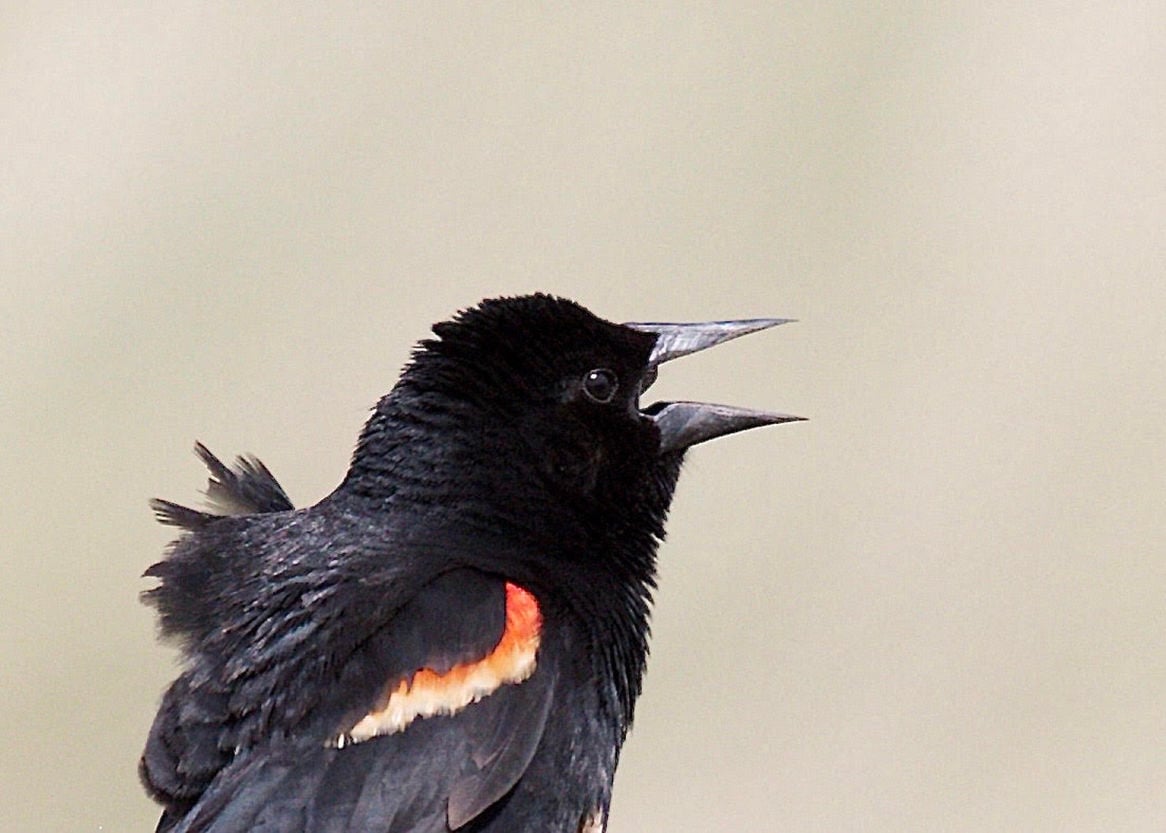 This singing male red-winged blackbird is a glossy black with red and yellow shoulder patches. 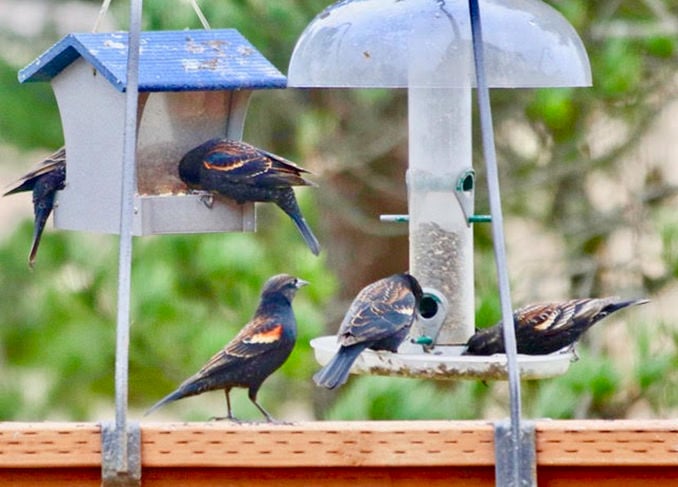 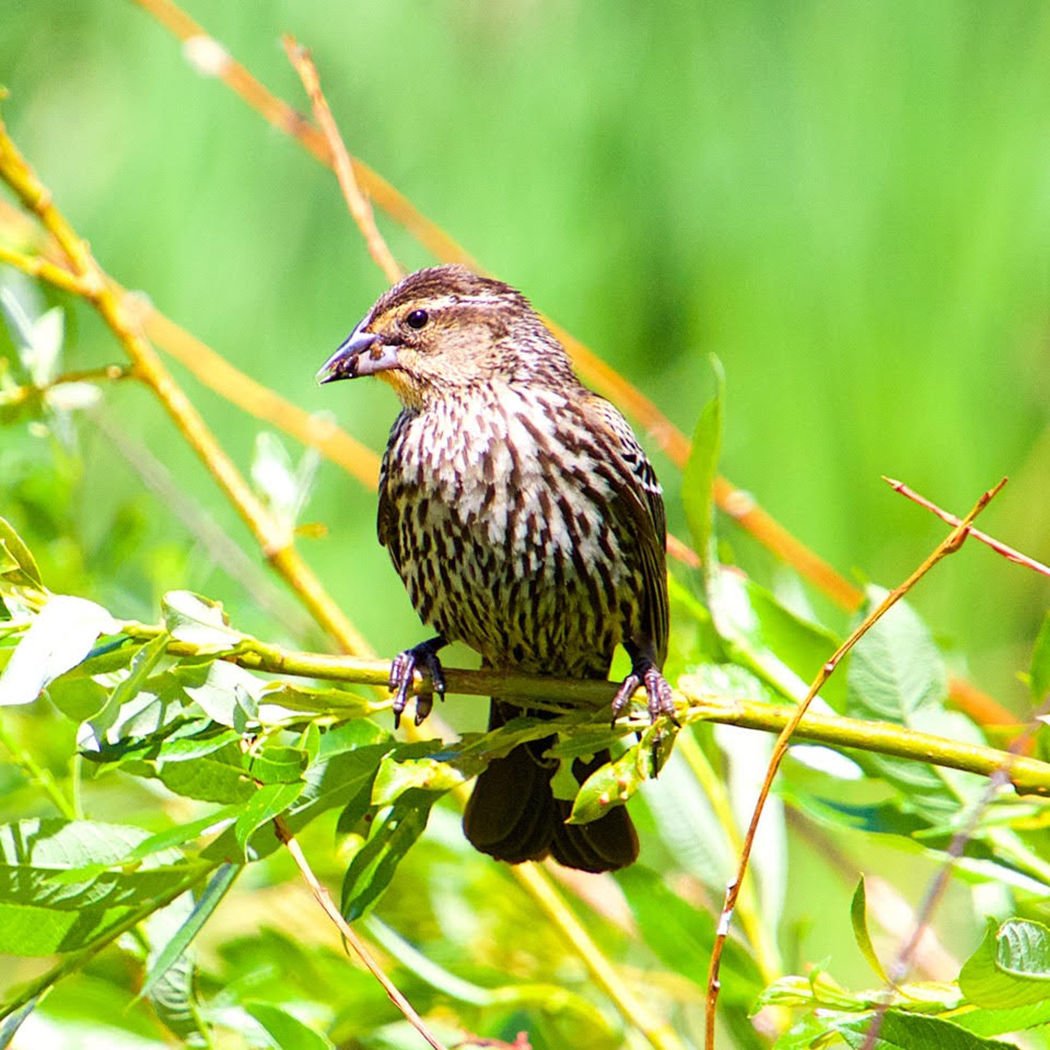 Red-winged blackbirds dine mainly on seeds and grains in winter, but switch to protein such as insects, grubs once the babies arrive. Note the insects in this female red-wings bill.

This singing male red-winged blackbird is a glossy black with red and yellow shoulder patches.

Red-winged blackbirds dine mainly on seeds and grains in winter, but switch to protein such as insects, grubs once the babies arrive. Note the insects in this female red-wings bill.

I went visiting at Rushlight Lake, also called Paul’s Lake on some maps showing Ocean Park. I was greeted by a cacophony of sound from the resident bird life which is always exciting on the lake and in its vicinity. The most prominent and loudest vocalist was the red-winged blackbird, and as luck would have it, my friend Sharon sent me photos of red-wings at her feeders. As she said, “they have reappeared.”

Red-winged blackbirds are usually thought of as a sign of spring! I love to hear their “konk-ka-ree, konk-ka-ree. The male with his red epaulets all puffed out and his bill wide open in song are what I associate with spring! The song exudes joy and to be truthful, there is no other bird song like it!

It is still winter though. Some of the red-wings we are now hearing may be ones that over wintered or are on the Peninsula because there is food. Isn’t it wonderful that they are now showing up at our feeders and singing too? It matters not whether they are birds who never left or whether they are spring migrants. The great American author, Thornton W. Burgess indicated a possible explanation for the red-winged blackbirds early appearance in his book “The Burgess Bird Book for Children” (1919, 2003), through Jenny Wren. In conversation with Peter Rabbit, Jenny said, “we rest whenever we are tired and just follow along behind Mistress Spring, keeping far enough behind so that if she has to turn back we will not get caught by Jack Frost” (2003, P.5). Perhaps some of the red-wings we are seeing now have traveled just like Jenny Wren did.

Despite a few blustery days, a bit of snow and winter storms, the temperatures have been relatively mild recently. At least the mid- to high-40s F seem to be somewhat warm to me! However, our feeders and bird baths will help the red-wings and other birds if they came too close behind Mistress Spring and got caught by Jack Frost. Of course our feeders will also help the other birds who have been with us all along.

As you know, the males of the species are generally the most colorful as is the case with the red-winged blackbird. Females are generally rather drab, and for good reason, camouflage when incubating their eggs. As Thornton W. Burgess puts it the female red-wing is “dressed all over in grayish-brown with darker brown streaks” which look almost black in places P. 53. Her profile is just like the male so she looks like a blackbird even though she is not entirely black.

The red-winged blackbird is one of our most abundant birds. It seems as though they inhabit every wetland and marsh across North America. The glossy black males are easily seen as they sit on high perches and atop cattails for what seems like the entire day, all the while belting out their distinctive song. Keep your eyes open for these beautiful singers, and for Mistress Spring who is on her way bringing more of our feathered friends right behind!