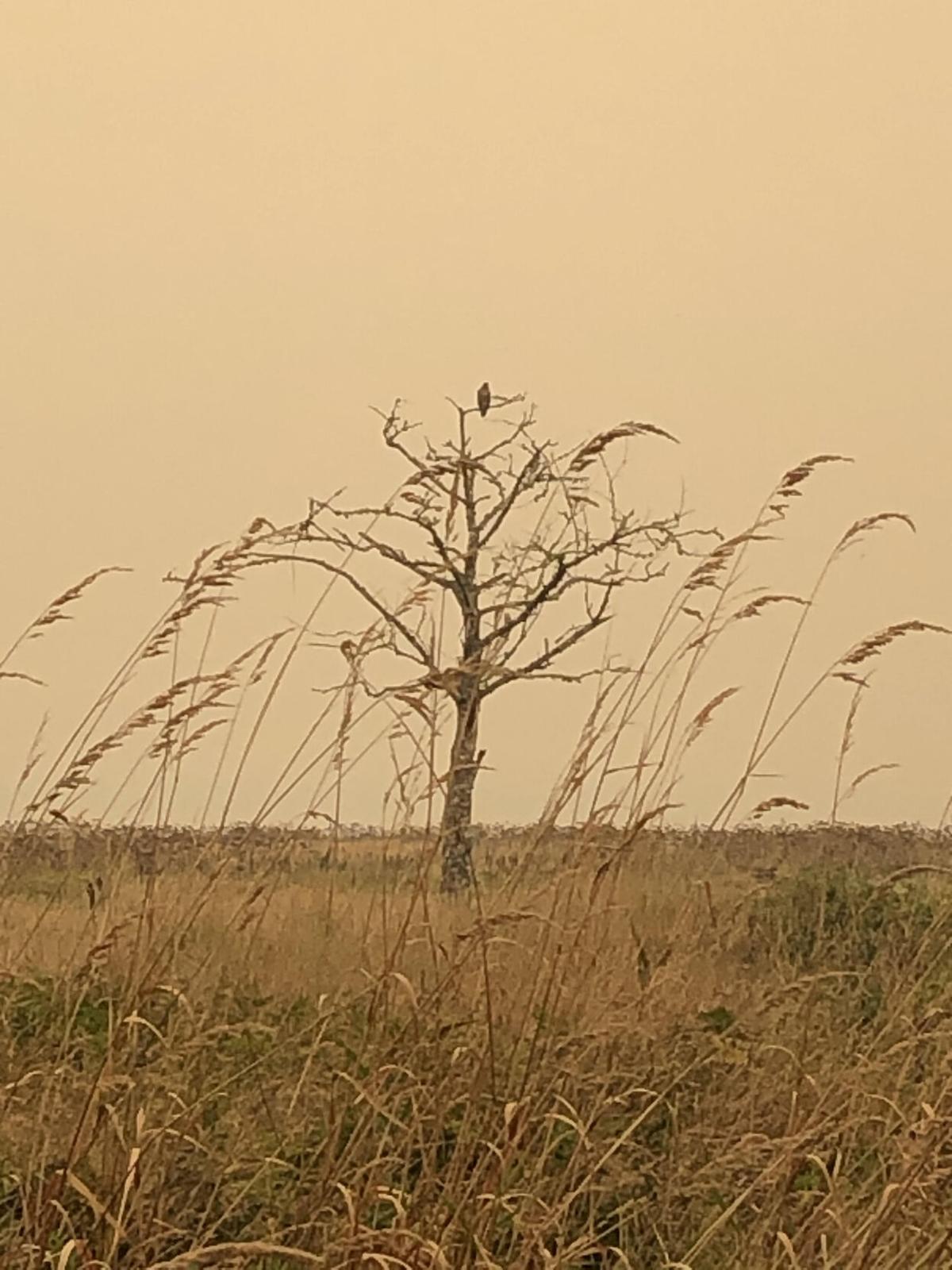 A raptor perches in an Oysterville tree during the days of smoke from the raging wildfires of the West. 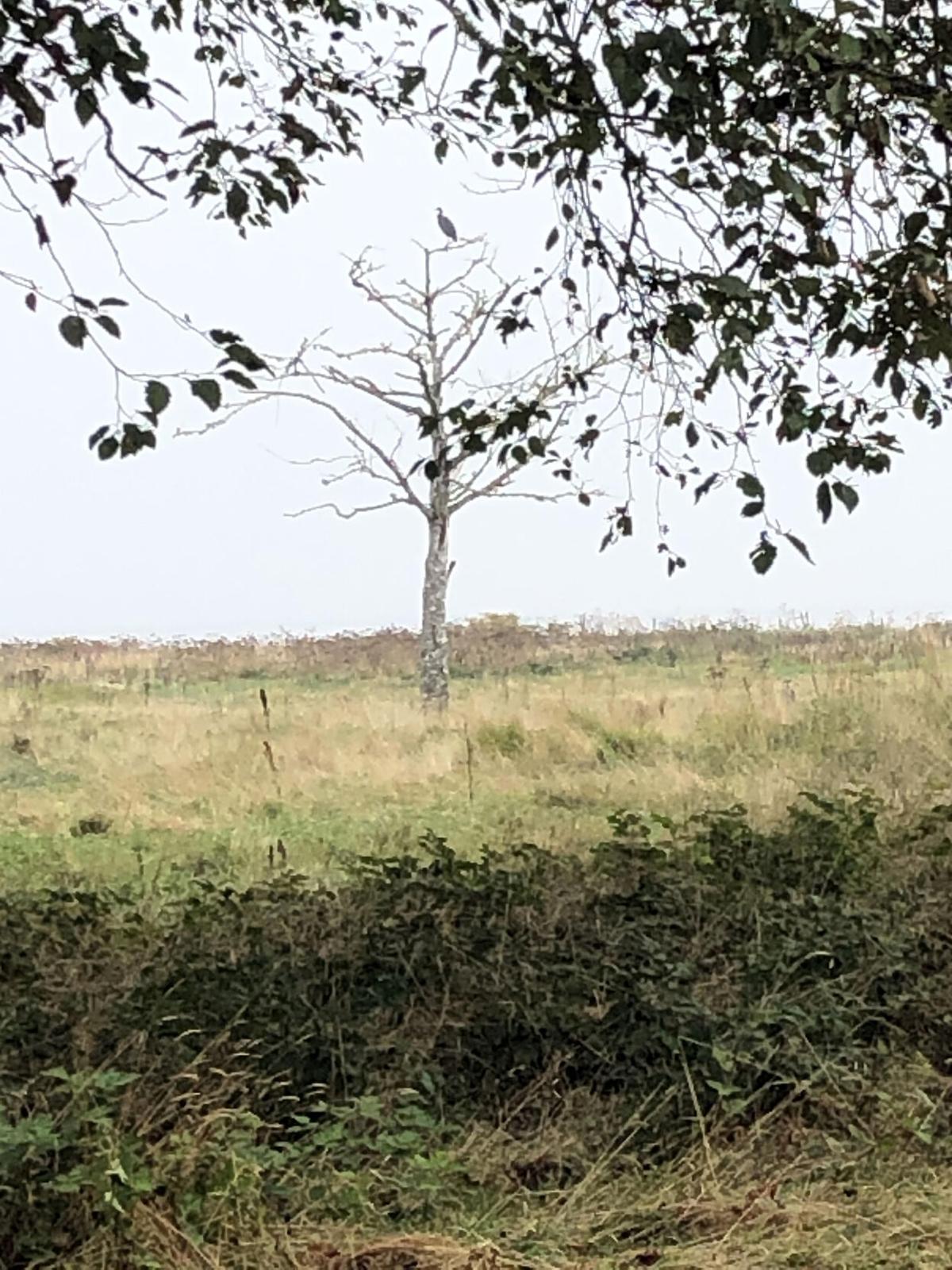 Same tree. A different bird. The smoke has lessened. Can you guess who? 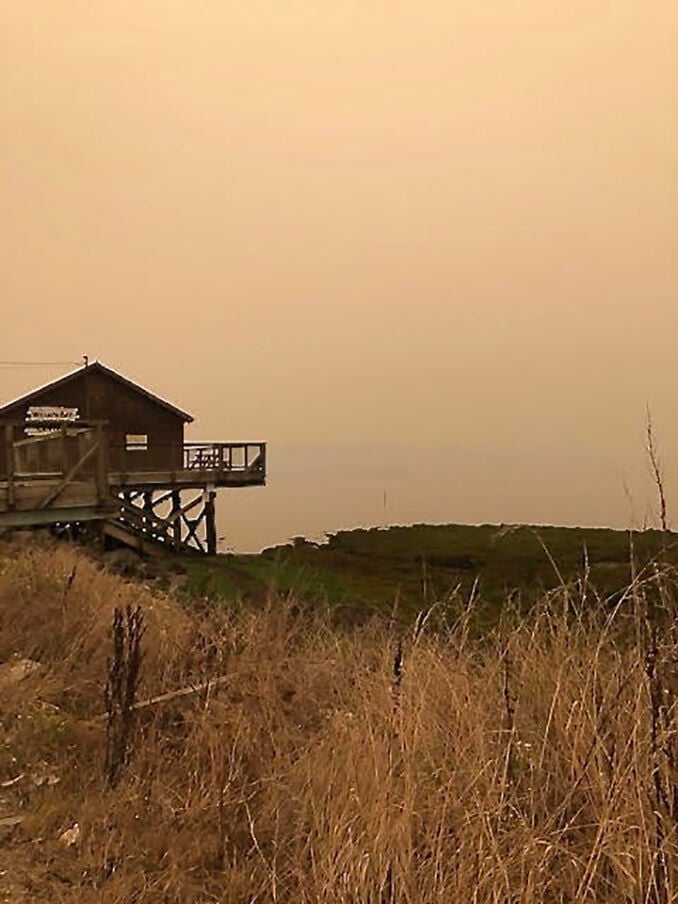 Smoke enveloped the Port of Peninsula in early September. Visibility was poor and the smoke thick. It is likely that the gulls and shorebirds that we would normally see here departed for a safer place.

Pine siskins have been coming in droves to feeders. So much so that extra seed is being put out on the deck railing and in small dishes for their eating pleasure!

A raptor perches in an Oysterville tree during the days of smoke from the raging wildfires of the West.

Same tree. A different bird. The smoke has lessened. Can you guess who?

Devastating wild fires are and have been raging in the West. Through rain and wind has cleared the air, smoke from the wildfires made breathing difficult for many and might have adversely affected the birds. I wrote about the effect of smoke generated by wildfires in 2018. With this article in mind, I wondered whether we have any more knowledge now compared to then. I wondered whether Olivia Sanderfoot, a graduate student at the University of Washington School of Environmental and Forest Science, who was studying the effects of air pollution including fire smoke on birds in 2018 found answers to the question of the effect of smoke on birds.

As luck would have it, on Sept. 17 an article appeared in the Seattle Times on this very topic. Again, as luck would have it, Sanderfoot was interviewed for the article. In 2018 she was unable to find any scientific studies on how wildfire smoke affected wild birds. This is still the case, except for one paper published “on the effects of the 2015 El Niño fires in Southeast Asia” (Seattle Times, Sept. 17, 2020).

Recent bird sightings from Washington birders suggest that the birds have mostly disappeared, but according to the Times, other birders didn’t see any change in behavior. Television news has been reporting that birds are in trouble in New Mexico, Colorado, Texas and Arizona. The Times article indicated that, according to Professor Martha Desmond of New Mexico State University, her guess was that “hundreds of thousands” of migratory birds died in these areas. She also indicated that autopsies were being done on some of the birds with the hope of seeing what caused this to happen. The question to be answered is whether the birds’ lungs were affected or whether something else caused this phenomenon, but at this point in time researchers can only speculate as to what caused so many deaths.

Bird behavior has been interesting these past few weeks during the peak of the smoky environment. I have had huge numbers of pine siskins, blue jays, house finch and various species of sparrows eating me out house and home and flocking to the bird baths. Other birders here are reporting a similar experience. Birders on the Long Beach Peninsula have been letting me know that they too saw this behavior in the birds. Many of the bird species seemed to congregate in large numbers for food, substance, and bathing here in Calgary and on the Peninsula. Is it coincidence that the air quality is poor and very smoky or is it that it is migration and some of the birds are just gathering in greater numbers than usual in some areas of the West in preparation for their journey to their wintering grounds? It is anyone’s guess.

As previously mentioned, there isn’t much scientific research on the effects of smoke from wildfires on birds. We, as citizen scientists, can contribute to the knowledge base by making notes on birds and their activities in our smoke-filled environment. Even though our observations may be anecdotal, they are useful.

Sanderfoot and her colleagues have been placing microphones and cameras in and around Seattle to see whether the smoke may be associated with a decrease in bird sound (Seattle Times, Sept. 17, 2020).

It seems that these days the fire season lasts longer and is more devastating than ever. It is to be hoped that the birds find a safe haven to ride out the “storm.” It is also hoped that Sanderfoot discovers the effects of smoke on birds and that her findings will help lead us to a solution.