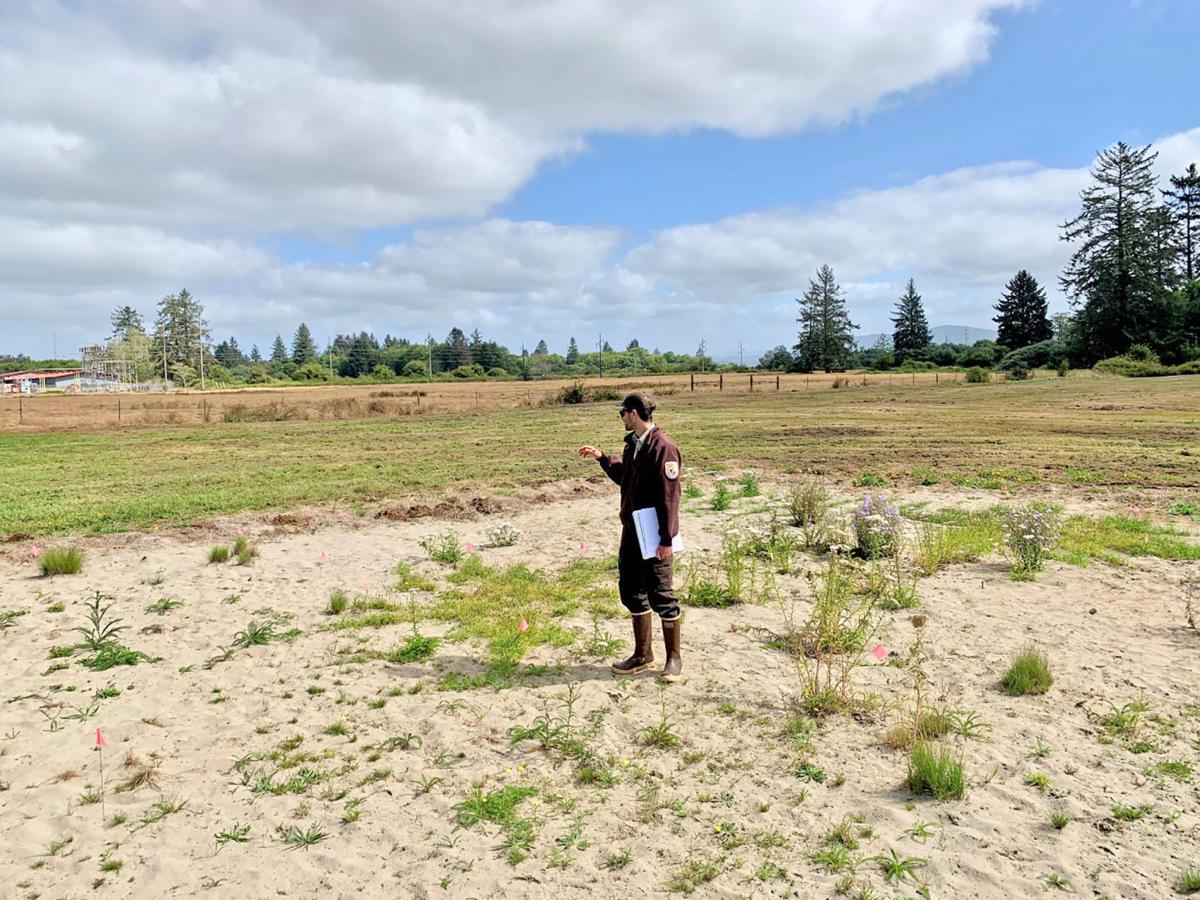 Before grass was introduced during white settlement of this area, native butterflies and other species thrived. A restoration project aims to reestablish a block of habitat resembling what was once here. 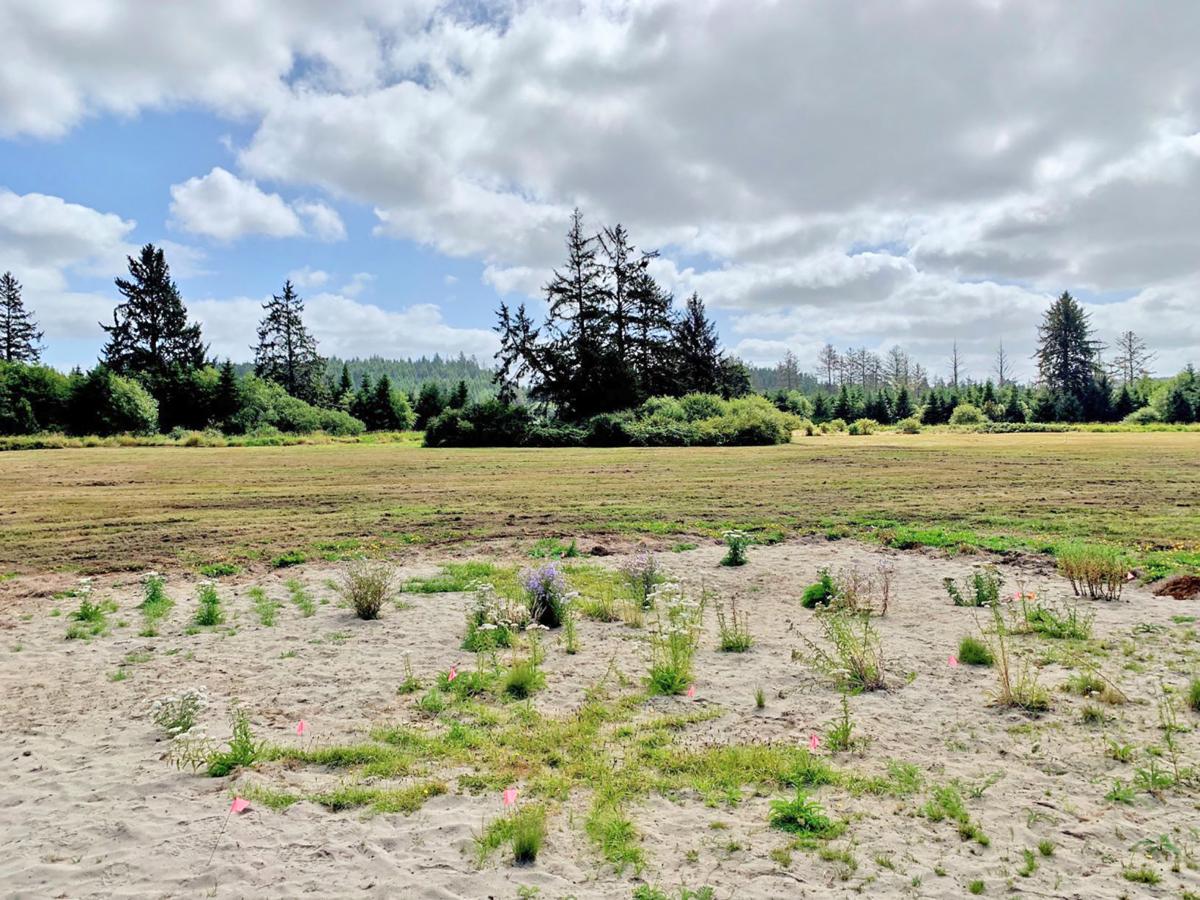 Thirty thousand early blue violets were being planted in a former cow pasture along Sandridge Road in preparation for reintroducing Oregon silverspot butterflies in Pacific County.

SANDRIDGE ROAD — A rare butterfly species disappeared from the Long Beach Peninsula in 1990. Now, restoration of its vanished coastal prairie habitat at the South Bay Unit of Willapa National Wildlife Refuge aims to bring the butterflies back, along with the beautiful violets on which it depends.

Large-scale replanting to recreate the Oregon silverspot butterfly’s habitat began in August and will continue until February 2020, according to the U.S. Wildlife and Wildlife Service, which manages Willapa National Wildlife Refuge.

This butterfly species has declined in abundance and range over the past four decades and is in danger of extinction. Only six of the 20 populations that historically occurred along the Pacific coastline from Grays Harbor County to Lake Earl in Del Norte County, California currently exist.

Efforts on the Peninsula are considered critical for the recovery of the species, USFWS said. The last Oregon silverspot butterfly in Washington state was observed here in 1990, not far from the location where the current habitat restoration is taking place near the intersection of Sandridge Road and Pioneer Road between 85th and 95th Streets.

Population decline of the Oregon silverspot is mostly blamed on loss of native coastal prairie habitat due to development and introduction of non-native plant species.

Oregon silverspot butterfly larvae feed exclusively on the leaves of the early blue violet. This violet was once a widespread and abundant component of native coastal prairies because it is adapted to tolerate salt spray, low-intensity fires and soil movement by wind. Development of coastal areas led to fire suppression and the introduction of non-native plant species that quickly dominated coastal prairies, stabilizing the soil and overgrowing the violets.

If the restoration succeeds, it will replace existing non-native pasture with native coastal prairie and reestablish a thriving population of early blue violets. The first landscape-scale planting of the species this year includes more than 30,000 plants. Violets will be planted in plots where the upper layer of soil has been removed using heavy equipment, which was determined to be the most effective method of reducing the growth of non-native pasture that competes with the violets.

The field surrounding the soil removal plots will be planted with a mixture of native red fescue and a variety of flowering plant species that adult Oregon silverspot butterflies visit for nectar. A hedgerow of native trees and shrubs will be planted in early 2020 along the western edge of the field to afford the butterflies protection from coastal winds and vehicle traffic on the adjacent road. Other native pollinator species such as bees, butterflies and moths will also benefit from these plantings.

Oregon silverspot butterflies are planned to be reintroduced to the site as the habitat becomes suitable. They will be released as larvae provided to the project by captive rearing programs at the Oregon Zoo and Woodland Park Zoo. This project follows another successful restoration and butterfly reintroduction effort currently underway at Nestucca National Wildlife Refuge.

If you have any questions about the restoration, contact the Willapa National Wildlife Refuge Headquarters at 360-484-3482.

The work at Willapa National Wildlife Refuge is made possible by partnerships between the U.S. Fish and Wildlife Service, Institute for Applied Ecology, the Sustainability in Prisons program at Coffee Creek Correctional Institution, the Oregon Zoo, the Woodland Park Zoo, North Coast Land Conservancy, the Oregon Military Department, and the National Park Service, among others.

Why officials are struggling to get Republicans vaccinated

In Adelaide South Australia a similar but community based project is about to get off the ground focused on the Bitterbush plant (adrianna quadripartita) and the Bitterbush Blue butterfly. The project is hosted by Bringing Back the Butterflies (check us on facebook) a project of the Australian Association for Environmental Education. We consider that such projects can be the vehicle for community engagement around biodiversity, ecology, community and sustainability. We'd love to hear any updates at this project email bbb.aaee.sa@gmail.com