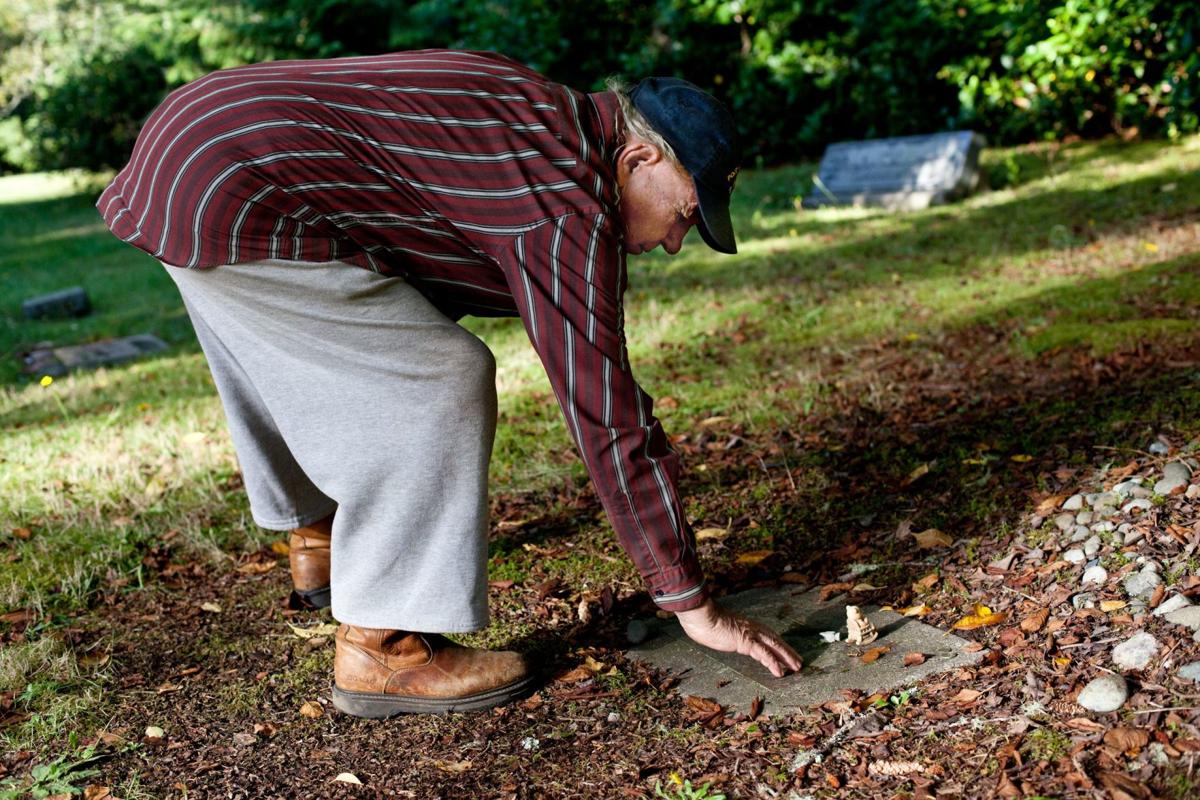 During one of his daily visits to Oysterville Cemetery, Bud Goulter takes the time to arrange the toys that decorate the headstones for twins who died in infancy in the late 1980s. 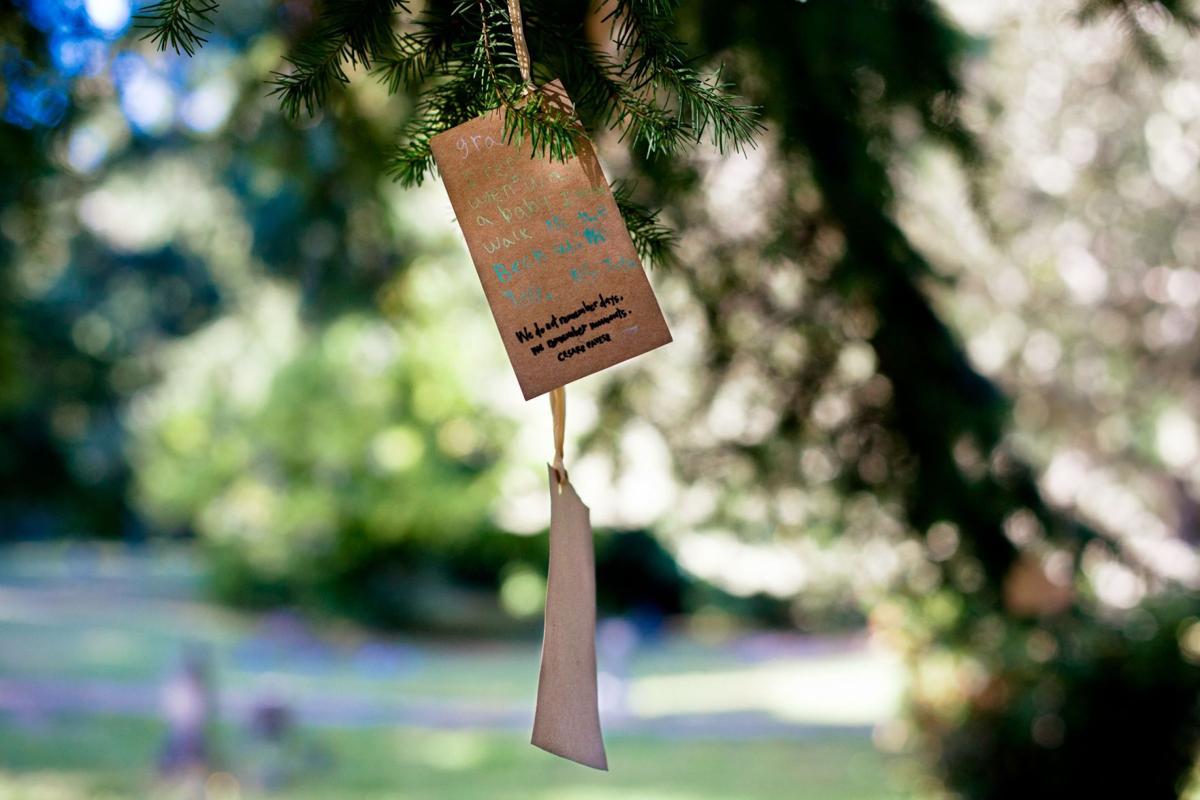 Mourning and burial traditions have evolved a lot during Goulter's life. On a recent visit, tags bearing heartfelt notes fluttered in a tree near a newer grave site — something Goulter said he'd never seen before. 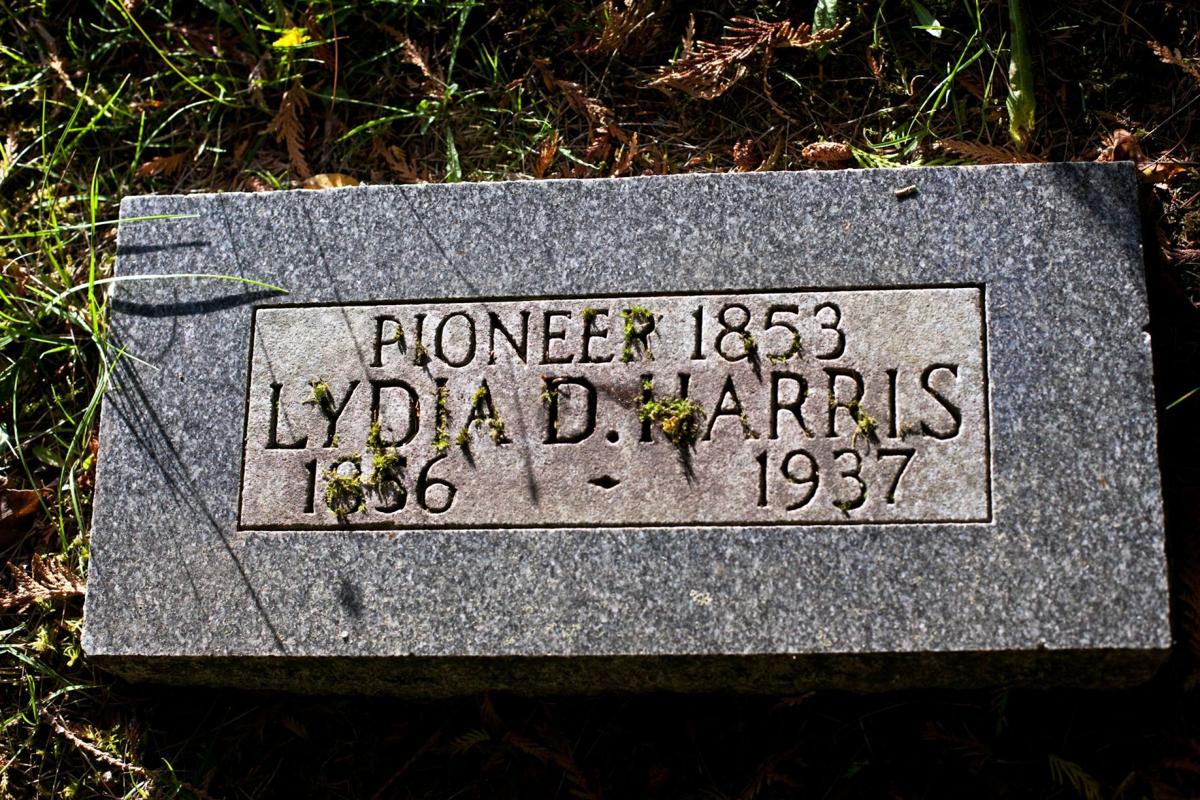 Graves in the cemetery date as far back as the mid-1800s. Several generations of Goulter's family are interred there, and Goulter, who is in his eighties, can share boyhood memories of many of the cemetery's inhabitants. 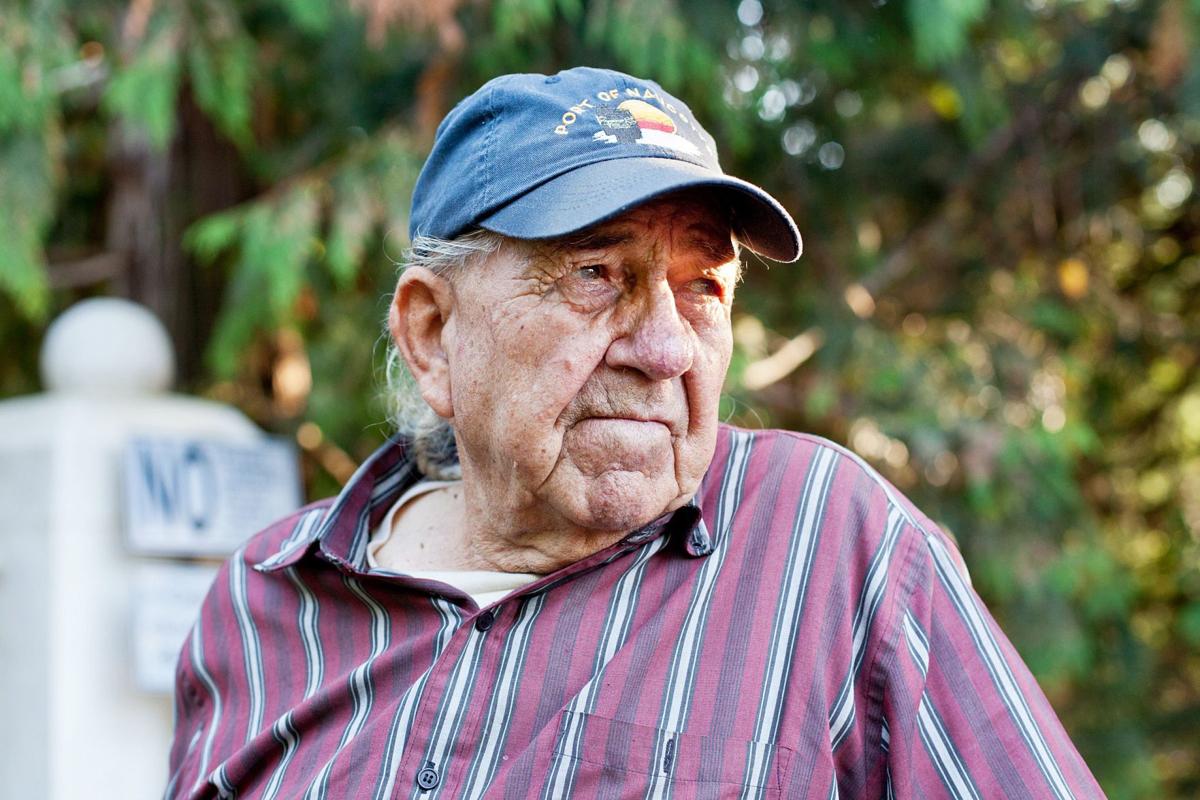 Bud Goulter dressed as a 19th century gentleman for the 1954 Oysterville centennial celebration.

During one of his daily visits to Oysterville Cemetery, Bud Goulter takes the time to arrange the toys that decorate the headstones for twins who died in infancy in the late 1980s.

Mourning and burial traditions have evolved a lot during Goulter's life. On a recent visit, tags bearing heartfelt notes fluttered in a tree near a newer grave site — something Goulter said he'd never seen before.

Graves in the cemetery date as far back as the mid-1800s. Several generations of Goulter's family are interred there, and Goulter, who is in his eighties, can share boyhood memories of many of the cemetery's inhabitants.

Bud Goulter dressed as a 19th century gentleman for the 1954 Oysterville centennial celebration.

OYSTERVILLE — In the last hour of sunlight, Bud Goulter parks just short of the locked iron gate at the Oysterville cemetery and stands for a moment in the small, silent clearing.

A few feet away, a velvet brown rabbit is nibbling the grass with little regard for two nearby humans or the Cajun music drifting from his car.

People who no longer want their pets sometimes dump them here, especially in late spring when Easter chicks and bunnies grow up and lose their novelty, Goulter, an Oysterville native explained.

Goulter, who is in his 80s, notices things like this because the cemetery is an integral part of his life. Many generations of his family and many of his friends are interred here. So is his beloved son, who died tragically, and young. This is where he and his wife Sherry, who passed away in 2013, will rest together. His regular visits are a way to keep a vigil for these loved ones, and to protect the sanctity of their resting place. He worries that as new generations lose their connection to the cemetery, they’ll no longer come to look out for the dead.

“I’m up here every day — that’s not no phony baloney. I’ve got a lot of family here. I’ve got lots of friends up here. I come up here a lot of times in the morning and a lot of times again at night to see how things are,” Goulter said, as he made his evening round.

For a long time, Goulter has acted as a sort of unofficial historian and watchdog for the cemetery. There is a cemetery board to handle money and legal affairs, and there are others in this community who come to cut the grass, rake the leaves and maintain the headstones. But Goulter has first-hand knowledge of many of the inhabitants — something few others can offer anymore.

He knows the layout by memory, can remember some of what was engraved on stones worn blank by age, knows where to find the unmarked paupers, the unnamed sailors, the man who perfected the art of smoking oysters for commercial sale. He knows the ambitions and rivalries and tragedies that shaped this place, and he loves to share them with the out-of-town visitors who come here hoping to learn about their heritage.

“I’m not on the board or anything,” Goulter explains, “Just a concerned citizen.”

On his daily visits, he monitors the progress of the creeping tree roots that threaten to uproot certain stones. He brushes moss and dirt out of engravings and sets things right when storms or vandals disturb the order. He helps visitors locate headstones, and he notices whenever something is wrong.

On this Friday evening, the cemetery road is silent, aside from a lost tourist who executes an awkward U-turn and rumbles back the way she came. But that is not always the case. More and more often, he encounters younger people, who seem to be adrift and unable to see the cemetery as anything more than a convenient place to misbehave. In addition to the animal-abandoners, there are the litter-bugs, the amorous teen couples, the shiftless junkies and vandals. Worst of all are the thieves who loot the cemetery and sell off pieces of his town’s heritage for the price of scrap metal.

A couple of weeks ago, they pulled apart bushes and uprooted most of the last remaining section of wrought-iron railing. “I was raised a cemetery’s hallowed ground, the same as going into a church. I feel that way. I guess some people weren’t raised that way,” Goulter said.

He called the sheriff, and then the newspaper, hoping to get some help apprehending the thieves. But so far as Goulter can tell, there’s no investigation. It’s difficult for him to understand why crimes like this don’t cause more public outrage.

“I’d like to see those people caught. I really would,” Goulter said. “I’ve been kind of a watch dog on it just as a concerned citizen, but I can’t stop it. I don’t know who could. I don’t know the answer.”

As a result of the ongoing vandalism, Goulter has become more wary of visitors.

“You can tell the difference between people that are interested and people that are scanning — looking to pick stuff,” Goulter explained. “One party, I’ve run out twice. I asked them, ‘Do you have family up here?’ They said ‘No,’ so I said, ‘You have no business up here. You better move out.’ They left. Two young guys that looked kind of cruddy. I run ‘em out.”

In response to the rash of thefts, someone — probably a member of the cemetery board — began locking the gate. Goulter is pretty sure the gate only succeeds in keeping out the infirm — after all, a sturdy person can walk around it. Recently, a woman brought her wheelchair-bound mother, and had to turn back when she realized there was no way to get her mother in.

“This is locking the barn door after the horse is out!” Goulter said.

He’d feel better if he could fix a few other things too. He says there are long-standing clerical and planning errors he’d like to correct, at least one historical figure he’d like to honor with an informational sign.

Pointing to a pair of graves, he says that in the 1980s, the man and woman were mistakenly buried where a walkway should have gone instead of on the plot they purchased.

But moving caskets requires piles of money and court orders, so it’s unlikely to change. Once, Goulter said, another community member suggested just moving the headstones to the correct location and leaving the caskets in place. He wasn’t amused.

“I don’t have long to be around — not too many more years. I’d like to see some of these things corrected. I’m not a trouble-maker, I’d like to solve some of the problems that’s been made,” Goulter said. “I don’t like trouble. I like what’s right, and it should be done.”

He continues his walk, stopping to arrange a handful of toys on an infant’s grave, to examine the tribute cards fluttering from the branches of a fir tree, and to tell the story of one of his ancestors, a founding father of Oysterville.

Finally, in a small grove of evergreens, Goulter points out the cluster of graves belonging to his closest relatives.

The ground in this part of the cemetery is a springy carpet of moss and needles, dotted with mushrooms. The wind whispers through the branches.

“This is my son,” Goulter says, pausing at another headstone. Even after nearly forty years, the loss is almost too painful to talk about. He laughs and says fiercely that he’s “Not ready!” to join his family yet. But he finds comfort in the idea that his future, like his past, will always be connected to this place.

“He was a very good boy,” Goulter says, as he stands up straighter and prepares to take his leave until tomorrow. “Always on time, a hard worker — Very good.”

Top country song from the year you graduated high school

Cayuga County has most new COVID-19 cases in one day, more hospitalizations