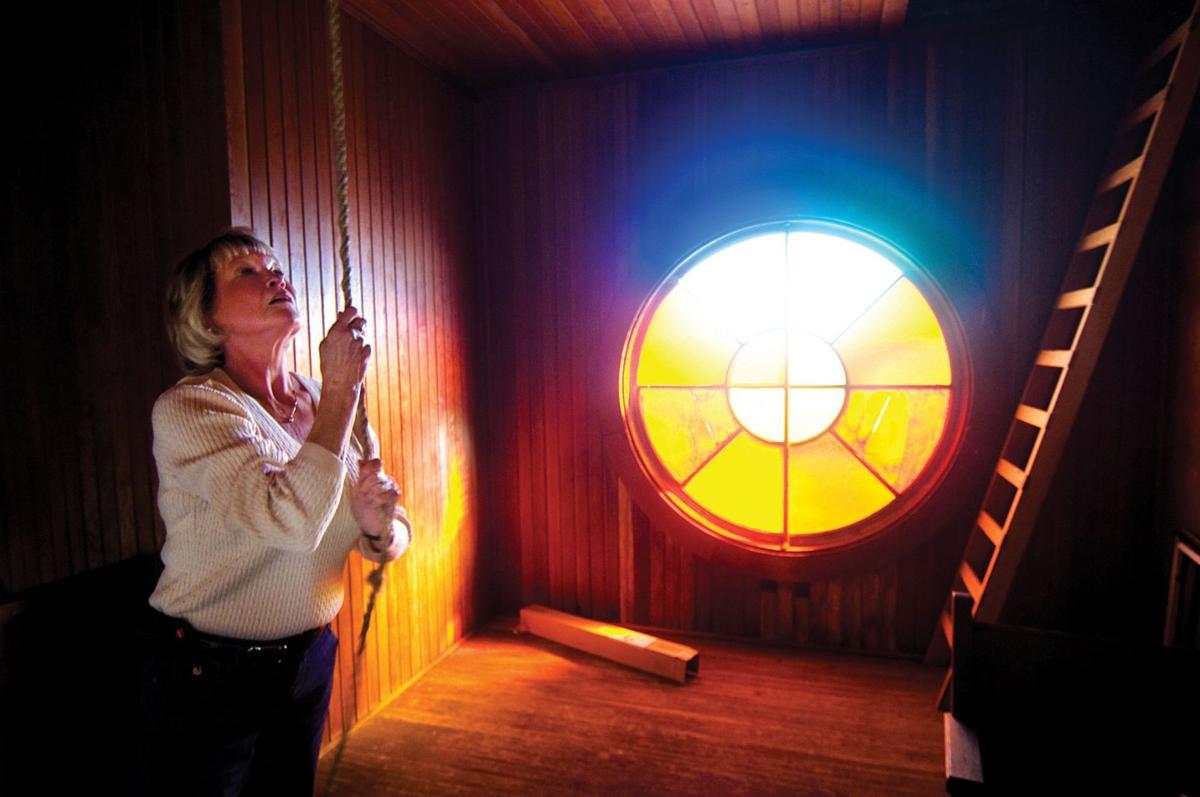 On a summer Sunday evening, the bell of the McGowan Church is rung to announce the start of services. St. Mary's Catholic Church of Seaview performs mass in the historic building during the summer. 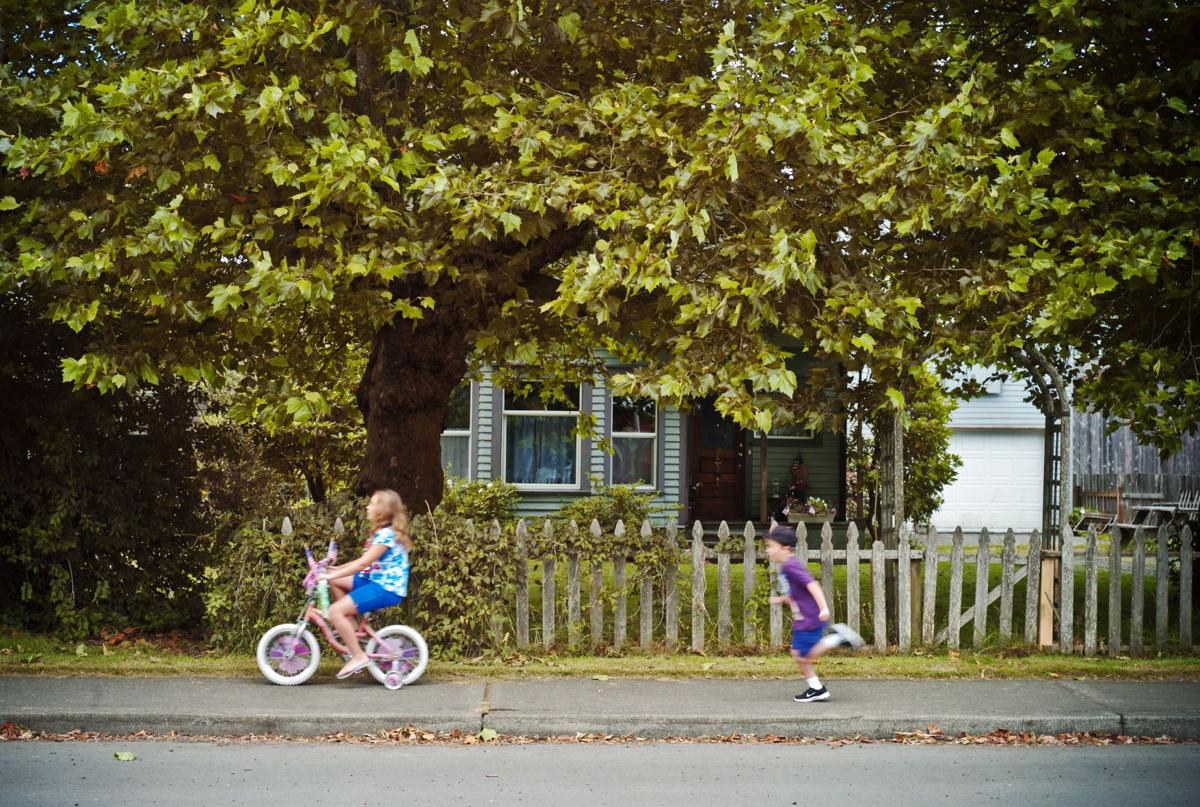 Children run along the tree-lined sidewalks of Chinook last summer. The bucolic town is particularly family-friendly. 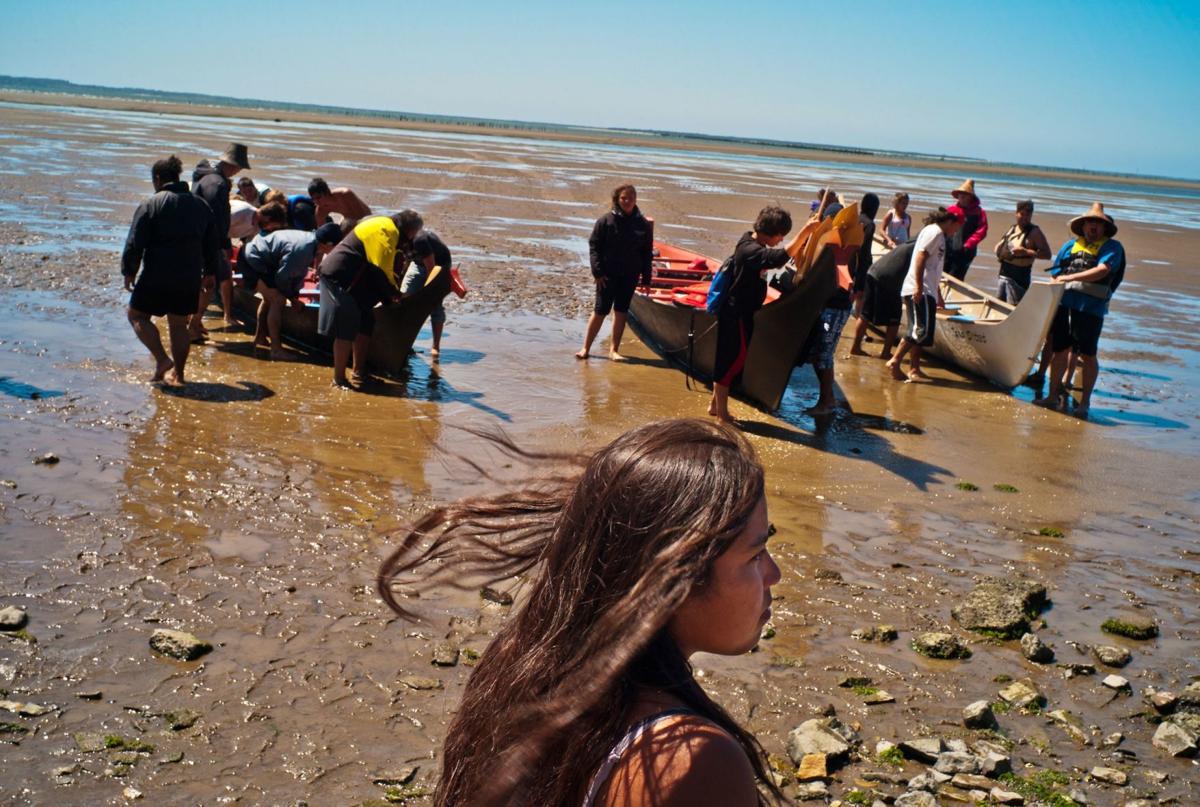 A regional tribal canoe journey stops off on the muddy shores of Chinook County Park. The Chinook people, whom the town is named for, hold their annual first salmon ceremony at Fort Columbia each year. 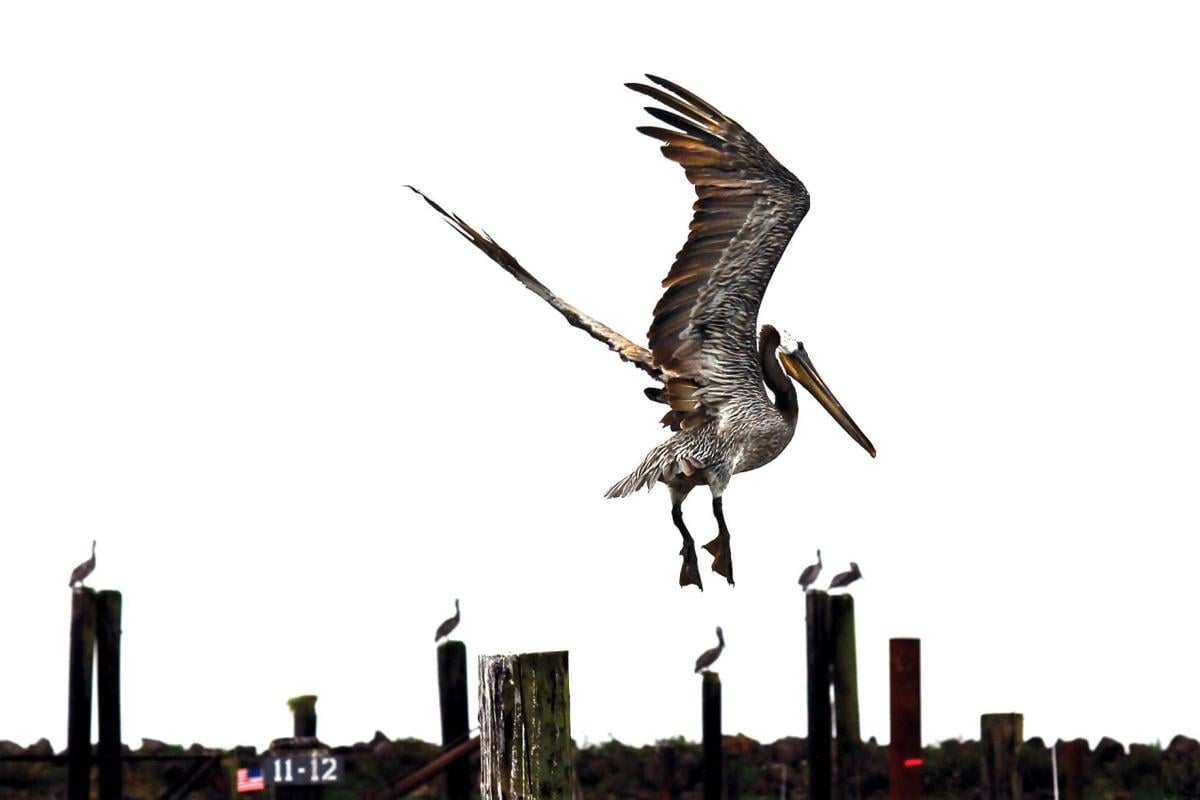 Brown pelicans in the mooring bason of the port of Chinook. The birds have taken to resting in great numbers on East Sand Island, near Chinook, while migrating. 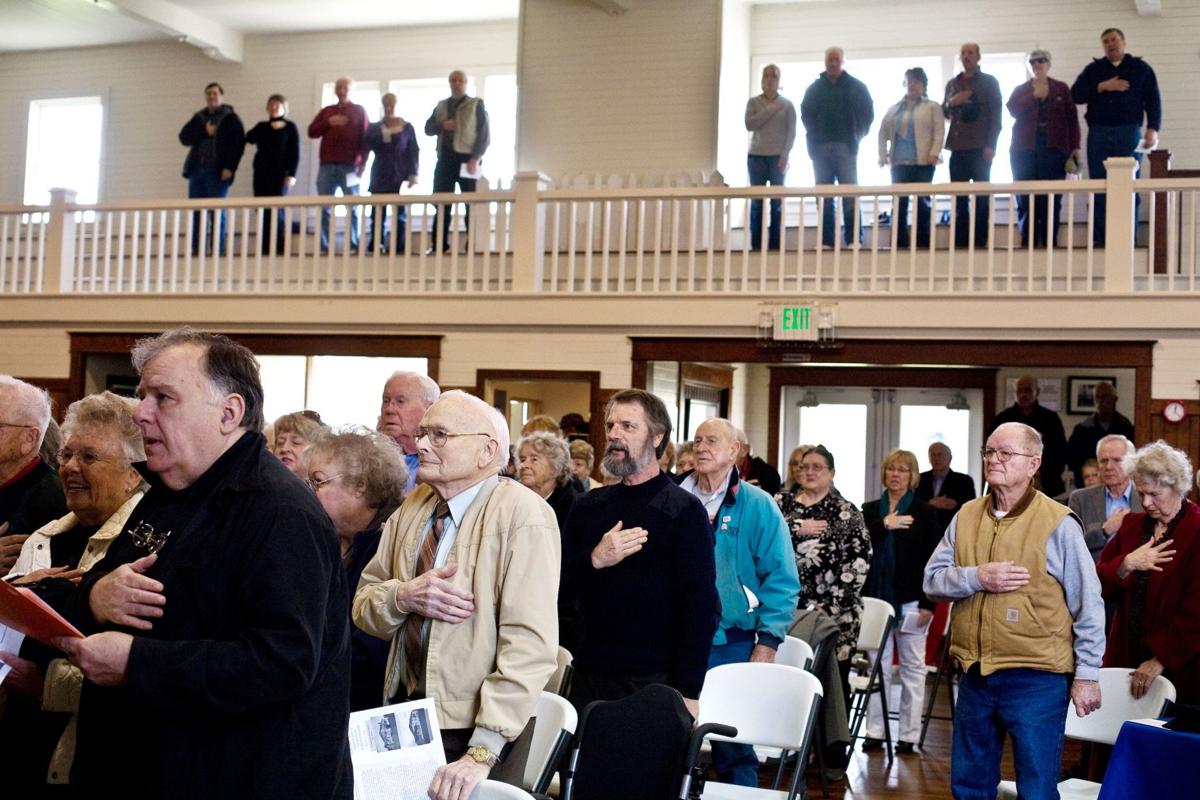 Those gathered for the reopening ceremony of the Chinook Gymnasium stand for the flag salute. The building has become a vital resource for community activities. 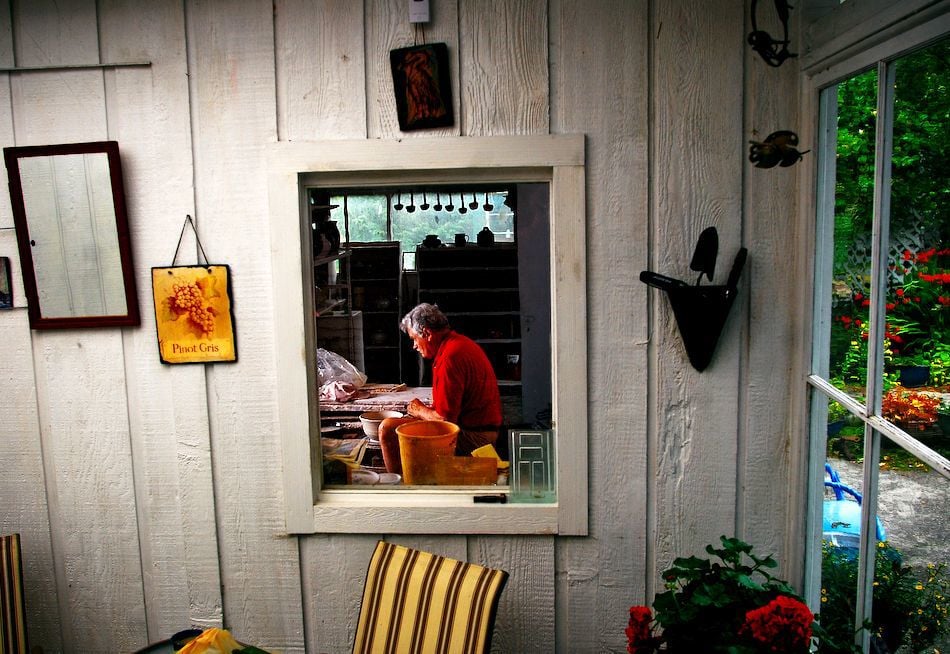 Clay artist Rodney Maxwell-Muir works in his studio at his Chinook home. Over several decades Maxwell-Muir has become one of the most well-known clay artists inthe region. 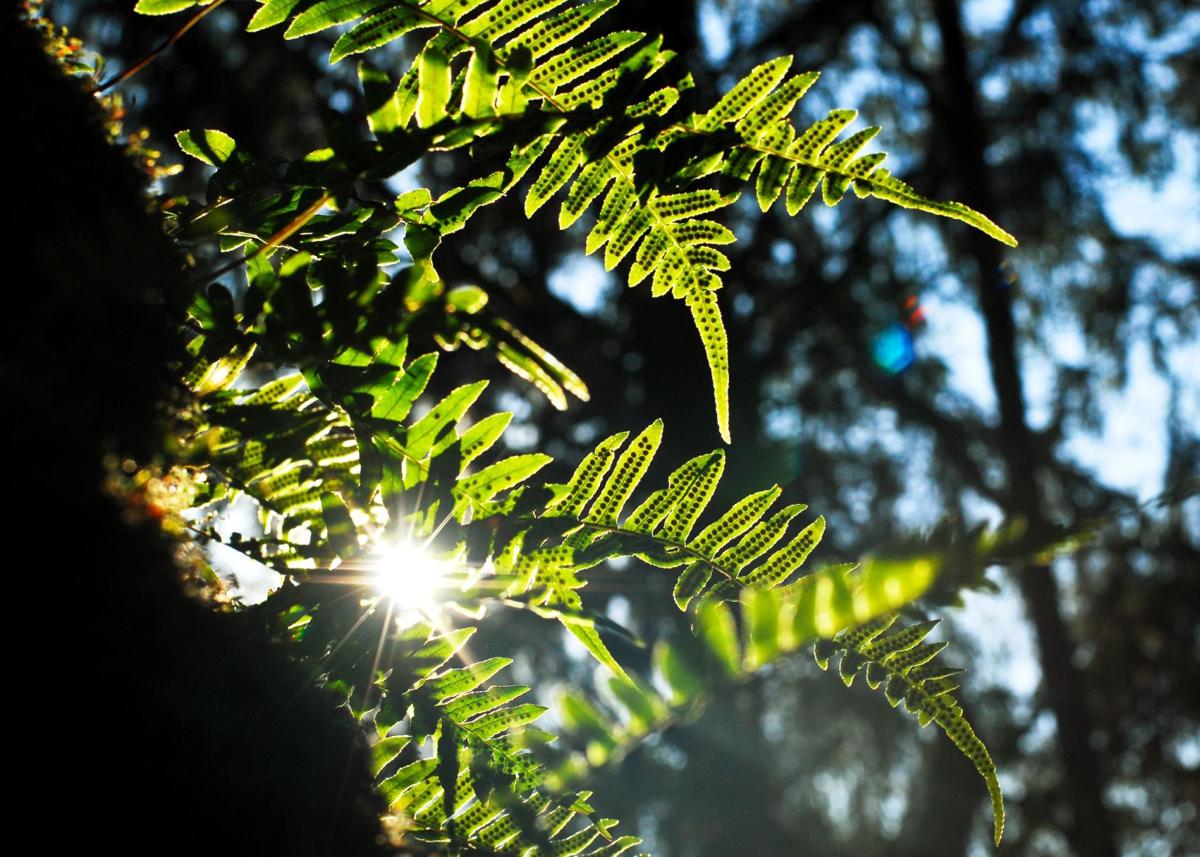 Winter sunlight shines through ferns on a stretch of the Fort Columbia Trail. 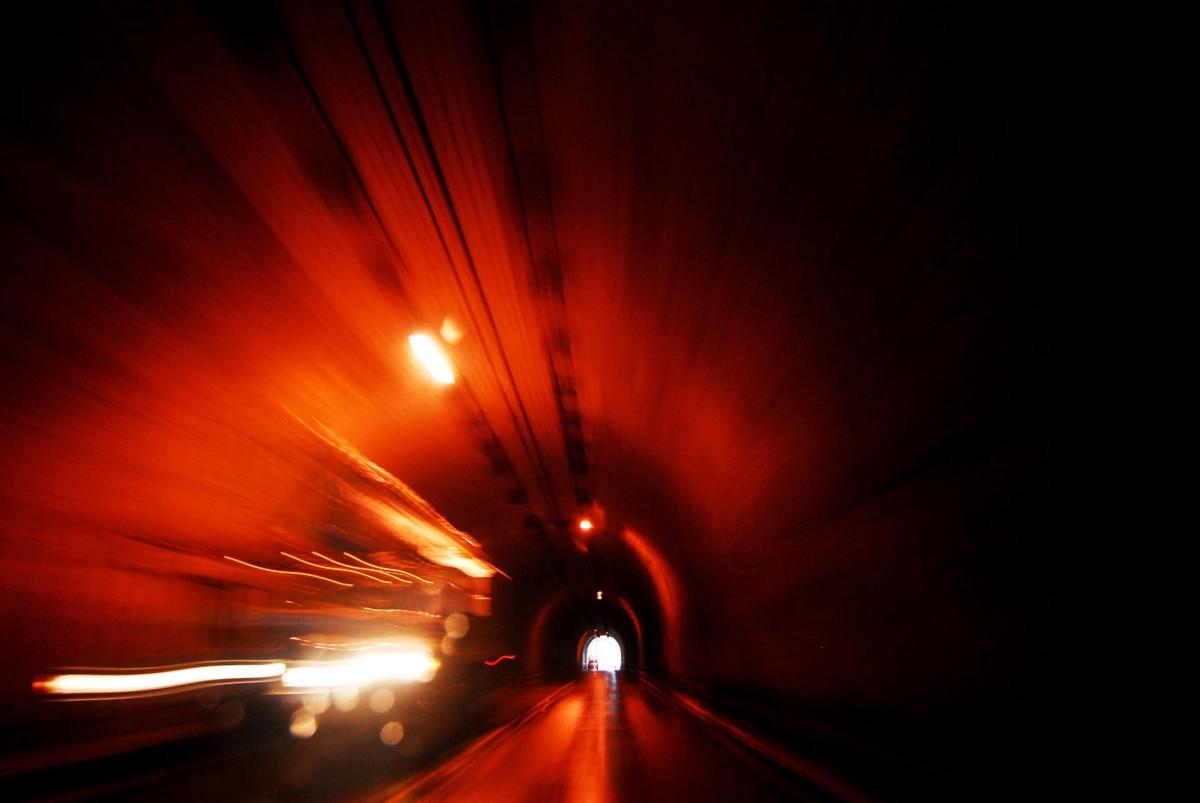 The Chinook tunnel is the gateway to the Peninsula. 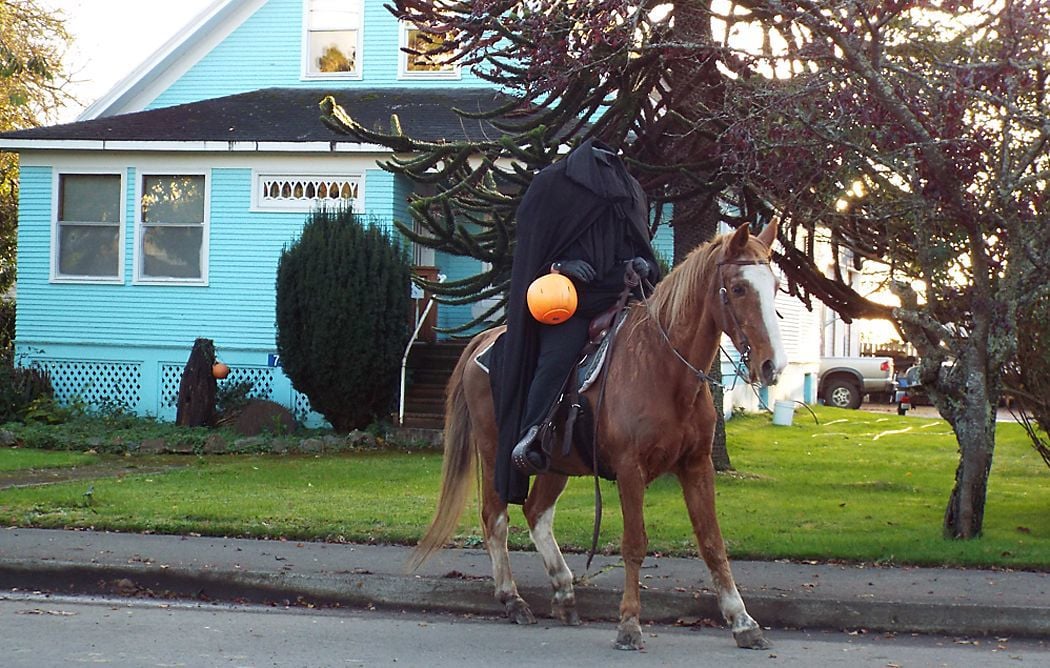 On a summer Sunday evening, the bell of the McGowan Church is rung to announce the start of services. St. Mary's Catholic Church of Seaview performs mass in the historic building during the summer.

Children run along the tree-lined sidewalks of Chinook last summer. The bucolic town is particularly family-friendly.

A regional tribal canoe journey stops off on the muddy shores of Chinook County Park. The Chinook people, whom the town is named for, hold their annual first salmon ceremony at Fort Columbia each year.

Brown pelicans in the mooring bason of the port of Chinook. The birds have taken to resting in great numbers on East Sand Island, near Chinook, while migrating.

Those gathered for the reopening ceremony of the Chinook Gymnasium stand for the flag salute. The building has become a vital resource for community activities.

Clay artist Rodney Maxwell-Muir works in his studio at his Chinook home. Over several decades Maxwell-Muir has become one of the most well-known clay artists inthe region.

Winter sunlight shines through ferns on a stretch of the Fort Columbia Trail.

The Chinook tunnel is the gateway to the Peninsula.

Chinook is a town most people pass through on the way to someplace else. For a long time, that was just fine with the residents. Their eyes were on the river — the fishing industry has been the town’s bread and butter for more than 100 years.

Quiet Chinook has attracted new residents who purchased homes beside neighbors whose families may have settled here a hundred years ago. The town’s population is an enticing mix — from bar pilots to studio potters and building contractors. The census says that 25 percent of the residents call themselves carpenters.

This unincorporated village is home to about 500 folks, but tourists flood the highway during the summer. For the tourist who cares to stop, Chinook has surprises to offer and a rich history to share.

Unsettling events have sometimes occurred in Chinook. This year as the sun was setting on Halloween, commuters were jolted to attention.

Ever so slowly coming towards them, in silhouette, a horse and rider. It was a Headless Horseman — a real one.

The broad-shouldered figure was dressed completely in black up to the stump where a head should be. Horse and rider drifted through Chinook as commuters grabbed for iPhones and cameras. And just as suddenly, horse and rider were gone.

The rider had been on the road before, timing his visits to rainless Halloween evenings. Old timers didn’t know the rider’s identity, others didn’t want to know — they liked the mystery.

Dale Hughes saw the rider as he left his boat shed and walked between a row of skiffs spilling out of his Chinook Marine Repair. He had an idea who the rider was but he wasn’t certain. Hughes, a master craftsman, is third generation boat builder working in the same spot on the highway, and he usually knows what’s going on in town.

Locals said the Horseman was seeking the man who attacked him, or perhaps the celebrated “Legend of Sleepy Hollow” author Washington Irving, who is rumored to have visited Chinook 170 years ago.

In Sleepy Hollow, a scrawny school teacher goes out for a walk in the waning light, not knowing that the ghost of an angry decapitated German horseman returns every evening to the place where he suffered his indignity. The school teacher and the Headless Horseman confront one another on the road. With his powerful arms, the Horseman hurls his severed head at the teacher — who runs away and is never seen again.

After gaining fame as an author, Washington Irving traveled the world, schmoozing with the rich and famous. Always in need of money, he became somewhat of a hack. The richest man in America, John Jacob Astor, recruited Irving to write a book that would celebrate his ill-fated fur company in Astoria in 1811. Irving ensconced himself in Astor’s mansion and spent two years writing about the tycoon’s fur company, along with anecdotes about the Chinook Indians, and the Chinook area. The book, titled “Astoria” is still in print. Descriptions of events were combed from logs, diaries, journals, books, interviews and Irving’s own memories of traveling on the frontier — Astor had never seen the place named after him, and neither did Irving.

It turns out the Headless Horseman is a 61-year-old woman. She wants to remain nameless, since few people know her alter ego, but she says she’s been doing it for six years, with the sole aim of bringing excitement and fun to her fellow Chinookers. The act takes planning and horsemanship. She obscures her identity by hiding inside a chicken-wire armature that gives her a much broader profile.

Most Chinookers don’t know about the Washington Irving connection, but everybody knows about the glory days of fish traps. These were the days when Chinook called itself the richest town in America. This prosperous hamlet smelled of boiling tar, which kept the fish nets lubricated and less noticeable to migrating salmon.

Those traps were outlawed over 80 years ago but still old men grieve their loss. Fish traps created real fortunes here. Fine homes stand along the highway as reminders of the town’s heyday.

In 1950, many years after the collapse of Fish traps, Chinook found consolation in a brand new port of its own. The Corps of Engineers altered the shoreline to create the port. The port and its Bell Buoy processing plant are the town’s economic mainstays in recent times. While this was a major event for fishermen, there were some who felt wistful for what was lost.

“We had a beautiful sandy beach near the cannery,” remembered Beverly Smith who was born in Chinook. “We kids played there for hours. And beyond the beach was a grassy field and trees.” As Smith remembered, the town was full of characters in those days. There was Marius Hansen, who rarely wore a coat in the rain. He told children he could run between the rain drops — in that way he never got wet.

While the livelihood of most residents centers on fishing and crabbing, many hunt as well. “This is a hunting community,” said Debbie Richmond, treasurer of the Chinook Valley Gun Club, located down the country road that runs behind town.

The range sports a clubhouse and several acres for practice. The site is well maintained, a result of two grants given by the National Rifle Association for physical improvements. The clubhouse, described on its website as, “warm and cozy,” has space to host dinners now that it has a modern kitchen built by volunteers.

“We’re starting the Claybusters, a club for kids,” said Richmond. This program teaches the young about the safe handling of guns.

The old school was the center of civic and social life. But when the grade school closed in the 1970s, Chinook’s children had to go to schools in Ilwaco and Long Beach. For a generation there was no town center in Chinook. The old school sat by the highway orphaned and dejected. Then, in 2002, advocates for the school formed the Friends of Chinook School. Over the last 12 years this group has raised tens of thousands of dollars through state grants and private donations and volunteers to restore the gymnasium and the classrooms. In the two years since its completion, the gymnasium has hosted Shakespeare performances, sports events, parties, receptions and civic meetings. The most public event is the annual Octoberfest, attracting people from all over the Peninsula. Members of the Chinook Indian Nation plan to rent space in the school. The town’s food bank is now based at the site.

Several months ago, the town’s two eateries closed. The venerable Chinook Restaurant and Lounge also changed ownership. The restaurant had a 1950s ambiance with its old-fashioned counter and dark booths. Two partners with extensive business operations on the Peninsula bought the restaurant and bar and plan to remodel it. The lounge has some notoriety because it was used as a set on a motion picture a few years ago.

At the same time, the only grocery store went up for sale and changed hands.

“It’s a privilege to be here,” says Tim Johnson who commutes to Olympia regularly for job at a food warehouse.

Johnson bought the grocery store and then purchased a stately but derelict house next door. At 42, Johnson has the enthusiasm of a new parent when it comes to restoring the old house. After gutting the interior and tossing out years of garbage, Johnson painted the house exterior ruby-red. This building will open as an antique store and tea shop. When a local resident remarked that the color made the house look like a brothel, Johnson says he laughed. The important thing is that folks see his shop and stop to look around.

Long before Lewis and Clark traipsed through, and long before John Jacob Astor made his mega-millions, the Chinook people, for whom this town is named, lived in this resource-rich area. At least one historian claims it’s the oldest non-native settlement in Washington state because trappers, lost sailors and woodsmen lived on the beach among the Chinook people.

Chinook has thrived through it all — and it still provides a special kind of life for the hearty souls who call this place home.

FDA pledges Covid-19 vaccine will be guided by science