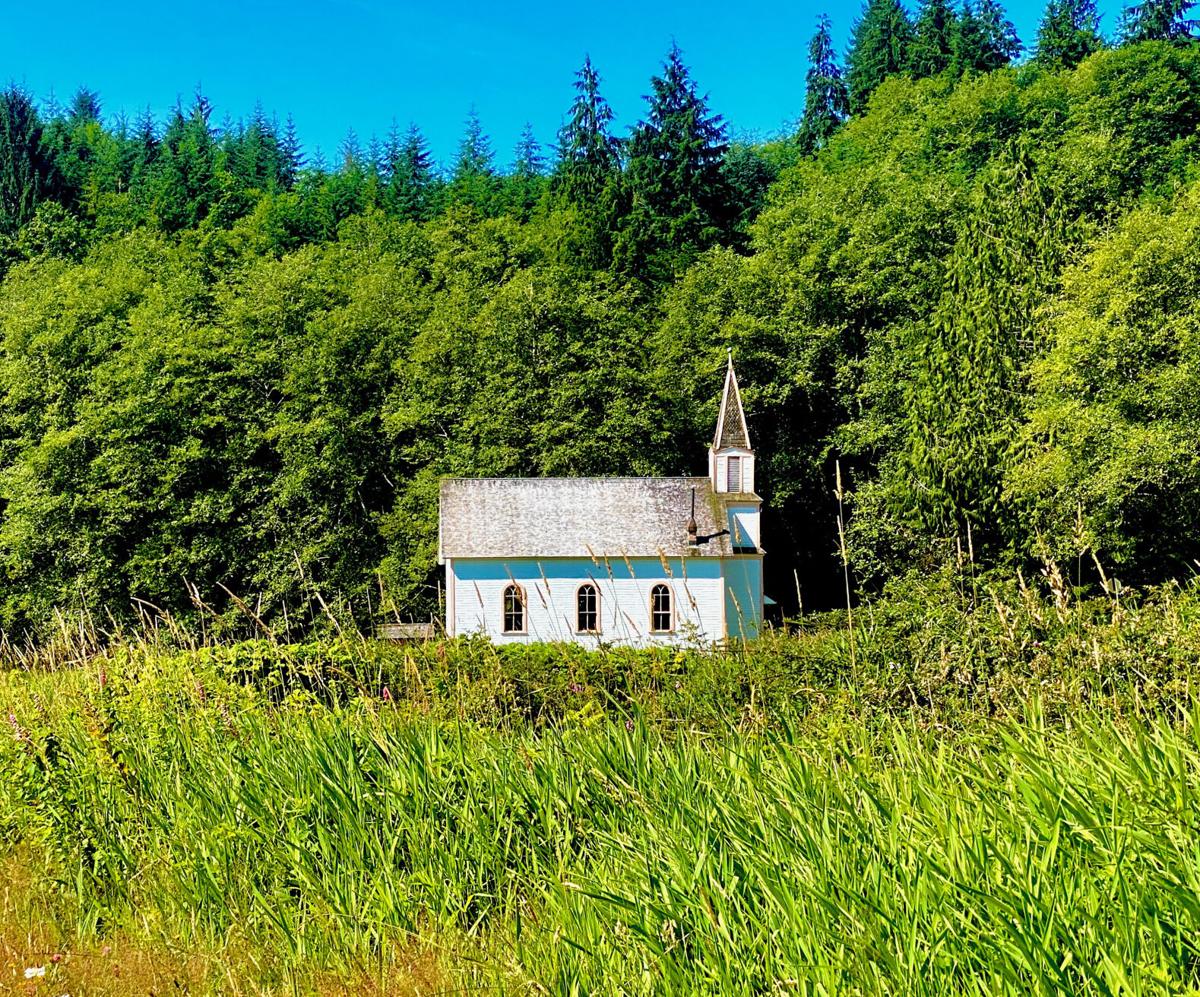 The Holy Trinity Evangelical Lutheran Church sits just off West Deep River Road. Built between 1898 and 1902, it remains a popular place for concerts and other neighborly gatherings in Western Wahkiakum County. 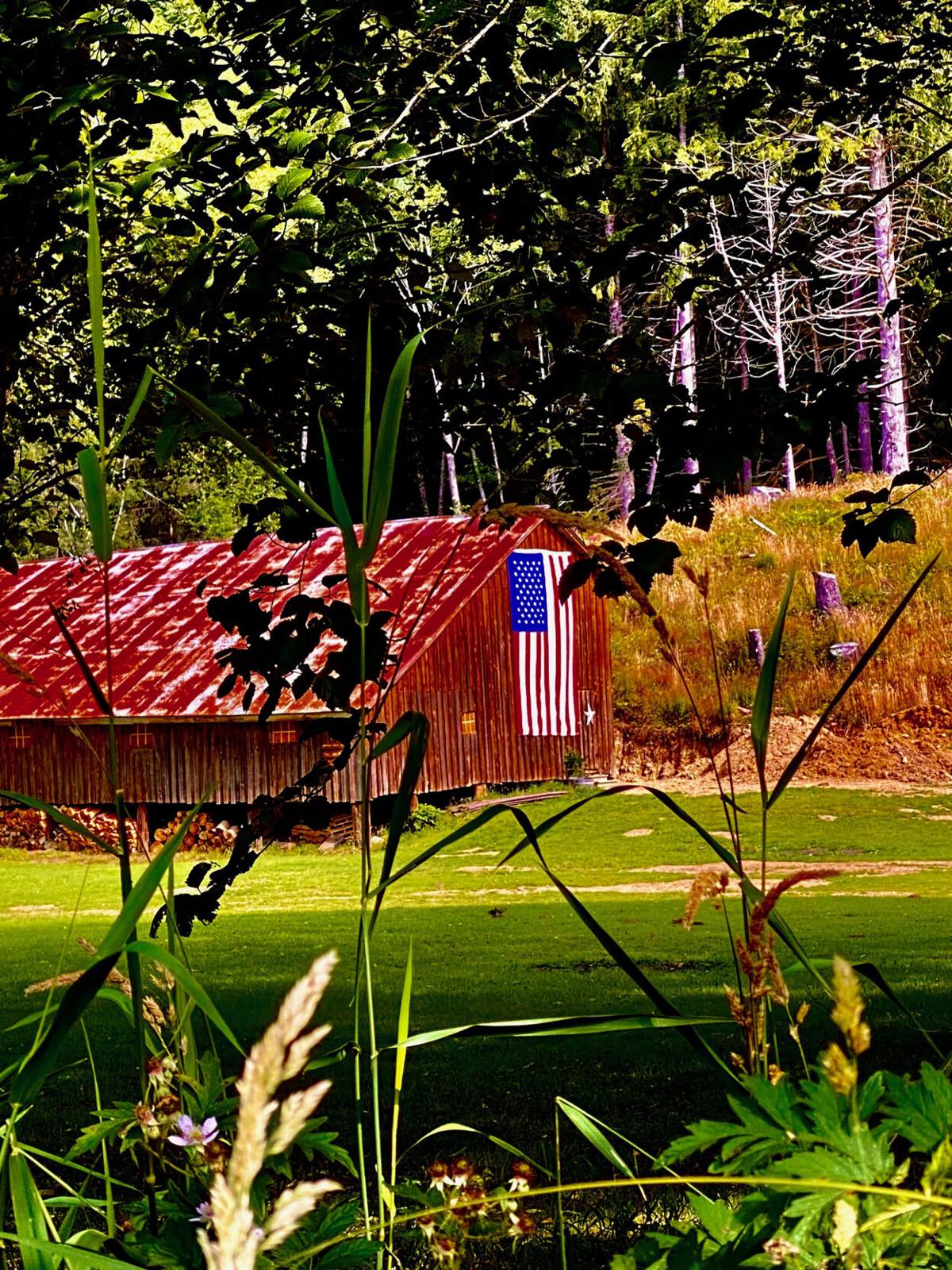 A large U.S. flag on the side of a barn signals the patriotic feelings of a Western Wahkiakum County landowner. 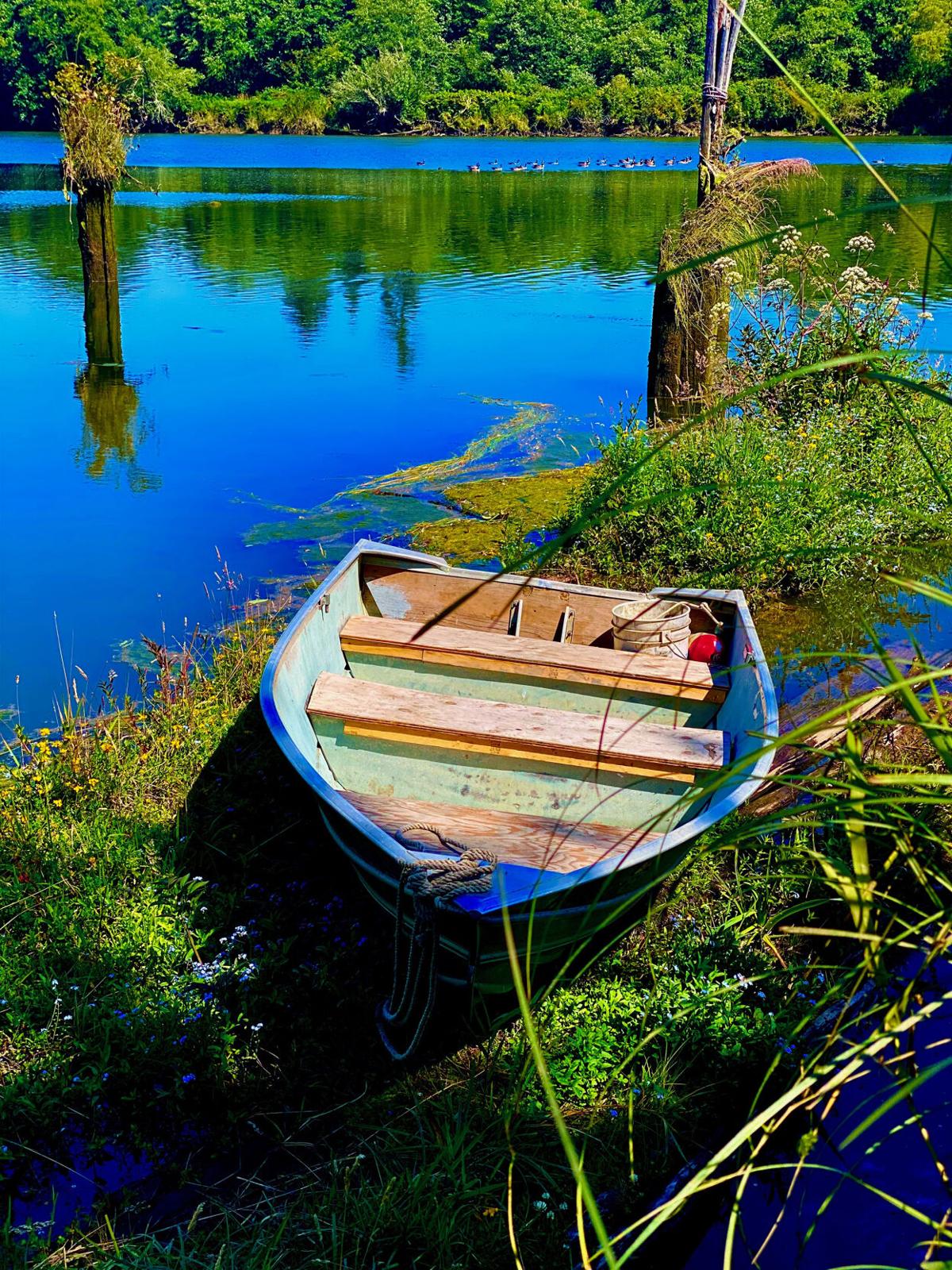 Near the mouth of Deep River where it enters Gray’s Bay on the Columbia, a dinghy is tied up on the rotting remains of a floating dock. A nearby resident reported fishermen are catching big white sturgeon in a hook-and-release fishery. 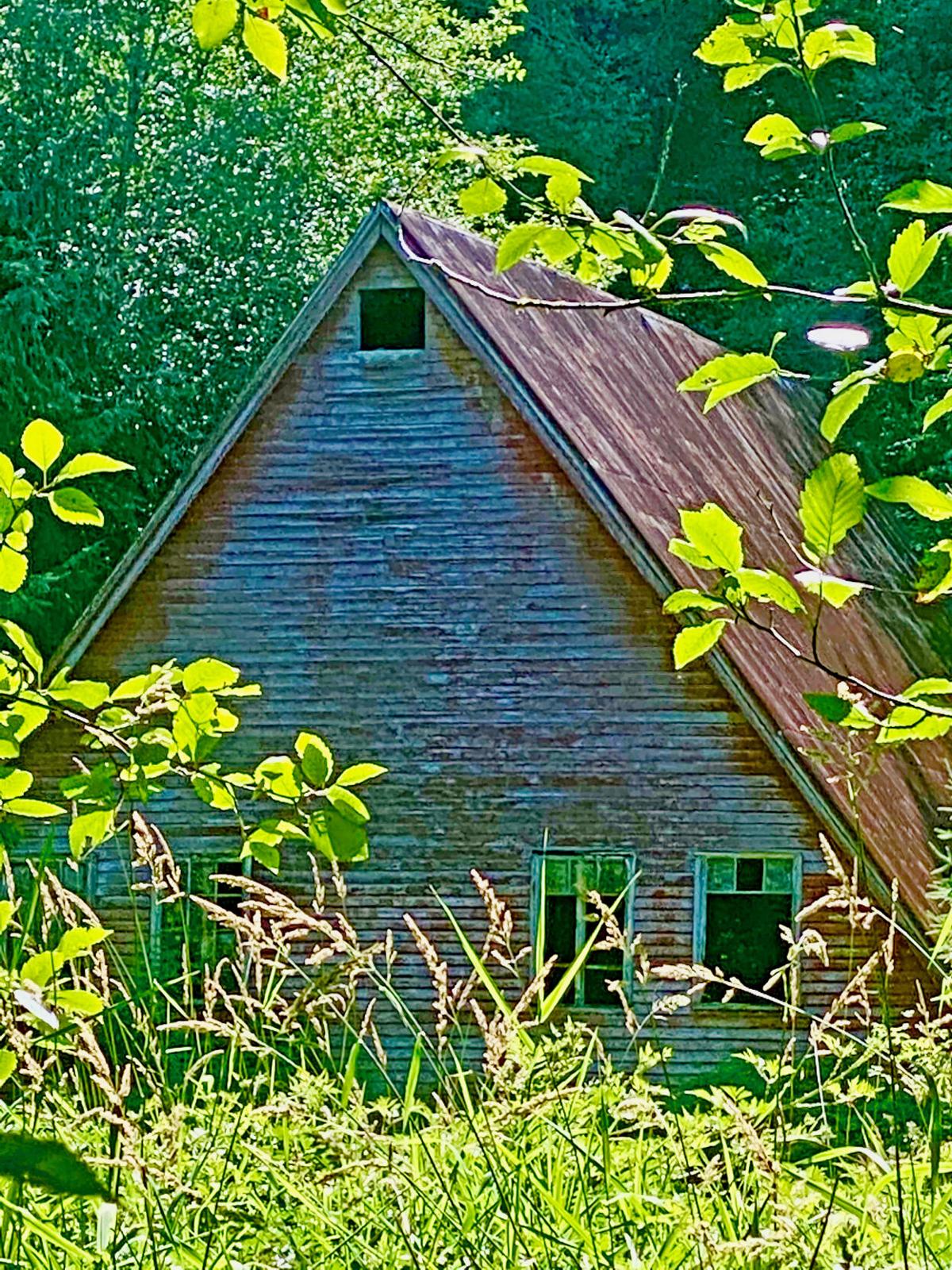 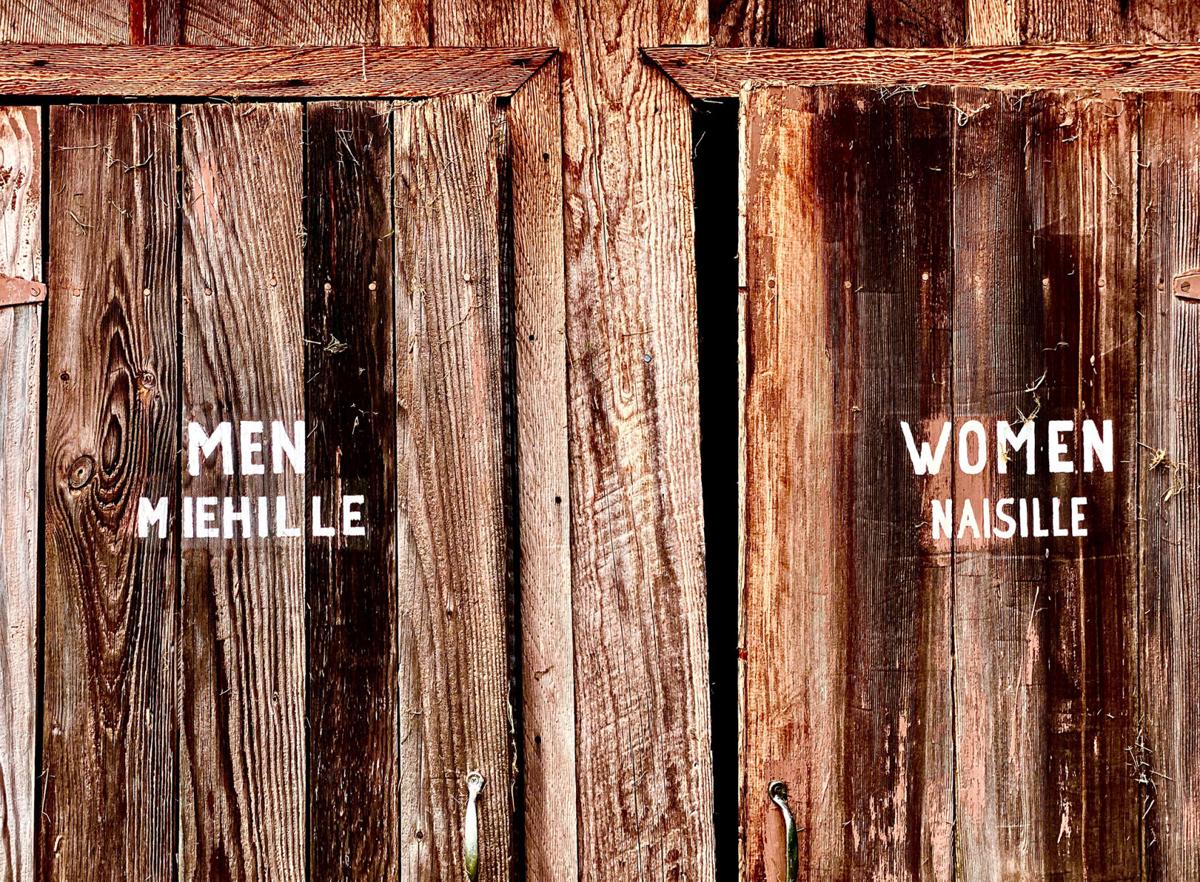 Outhouse doors at the pioneer church in Deep River signal the strong influence of Finnish immigration in the local communities. 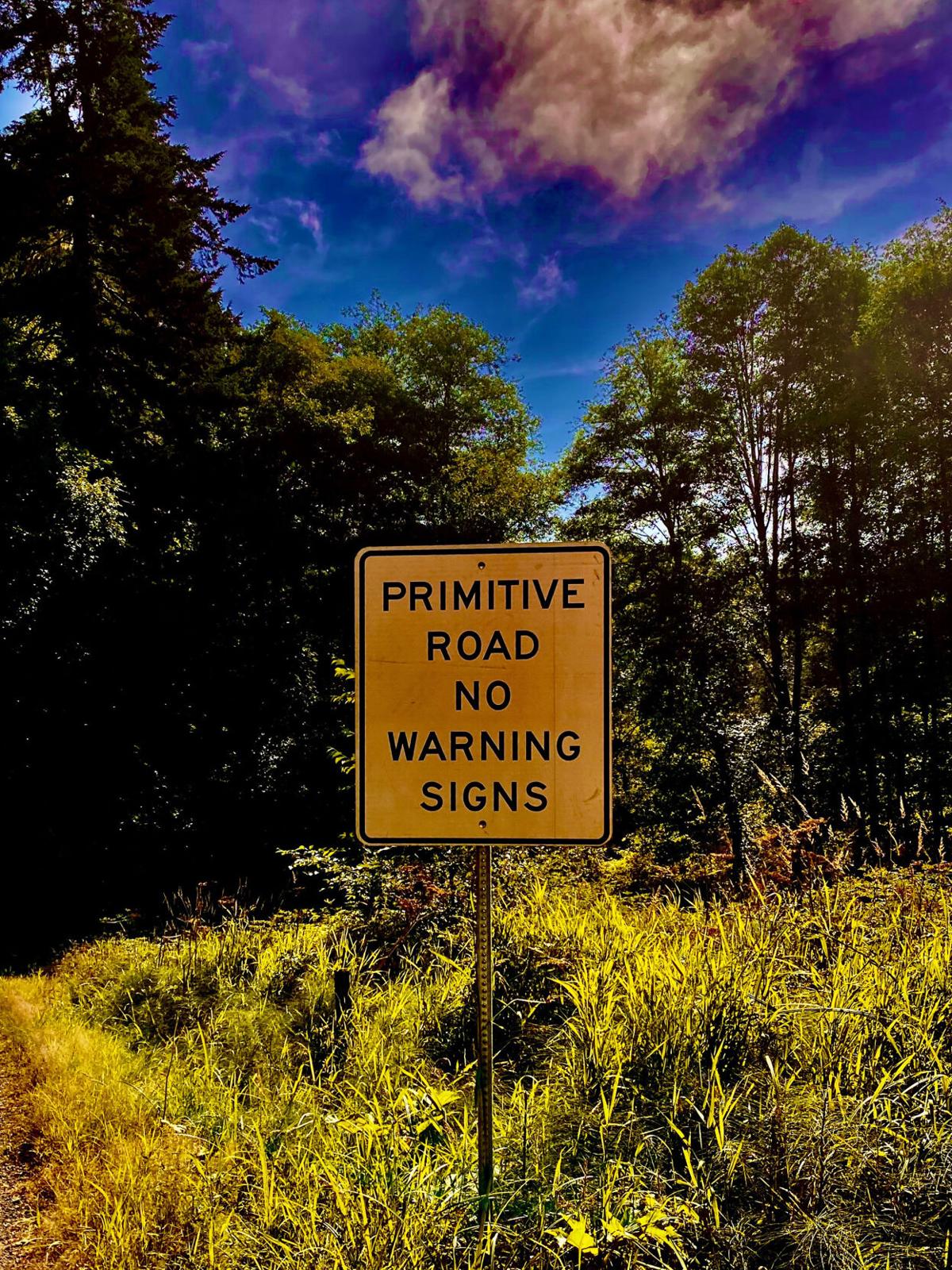 The sign says it all: The farther a walk extends into the Willapa Hills, the wilder things become. 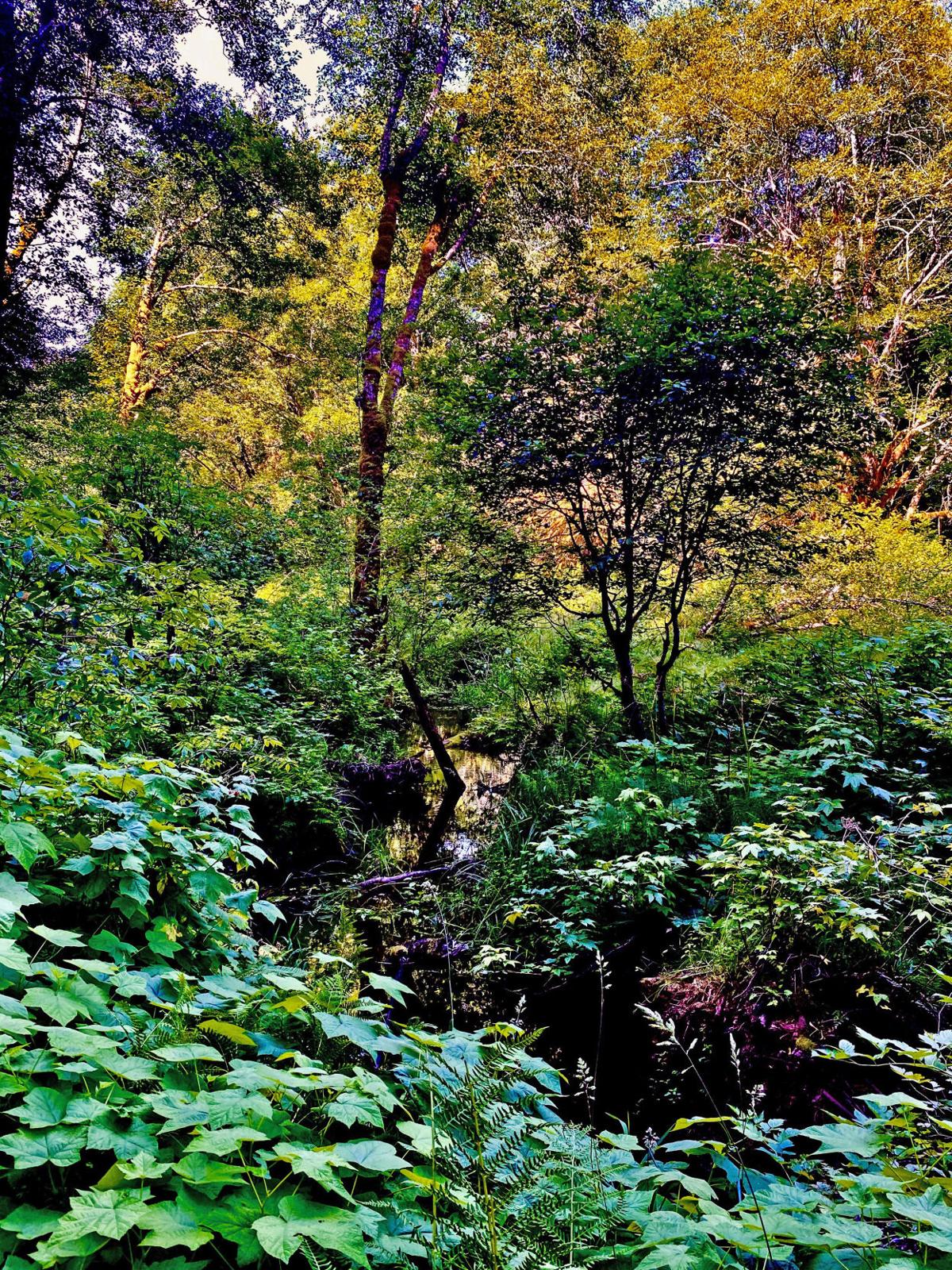 A carpet of deep green lulls natural sounds into a summer soliloquy. 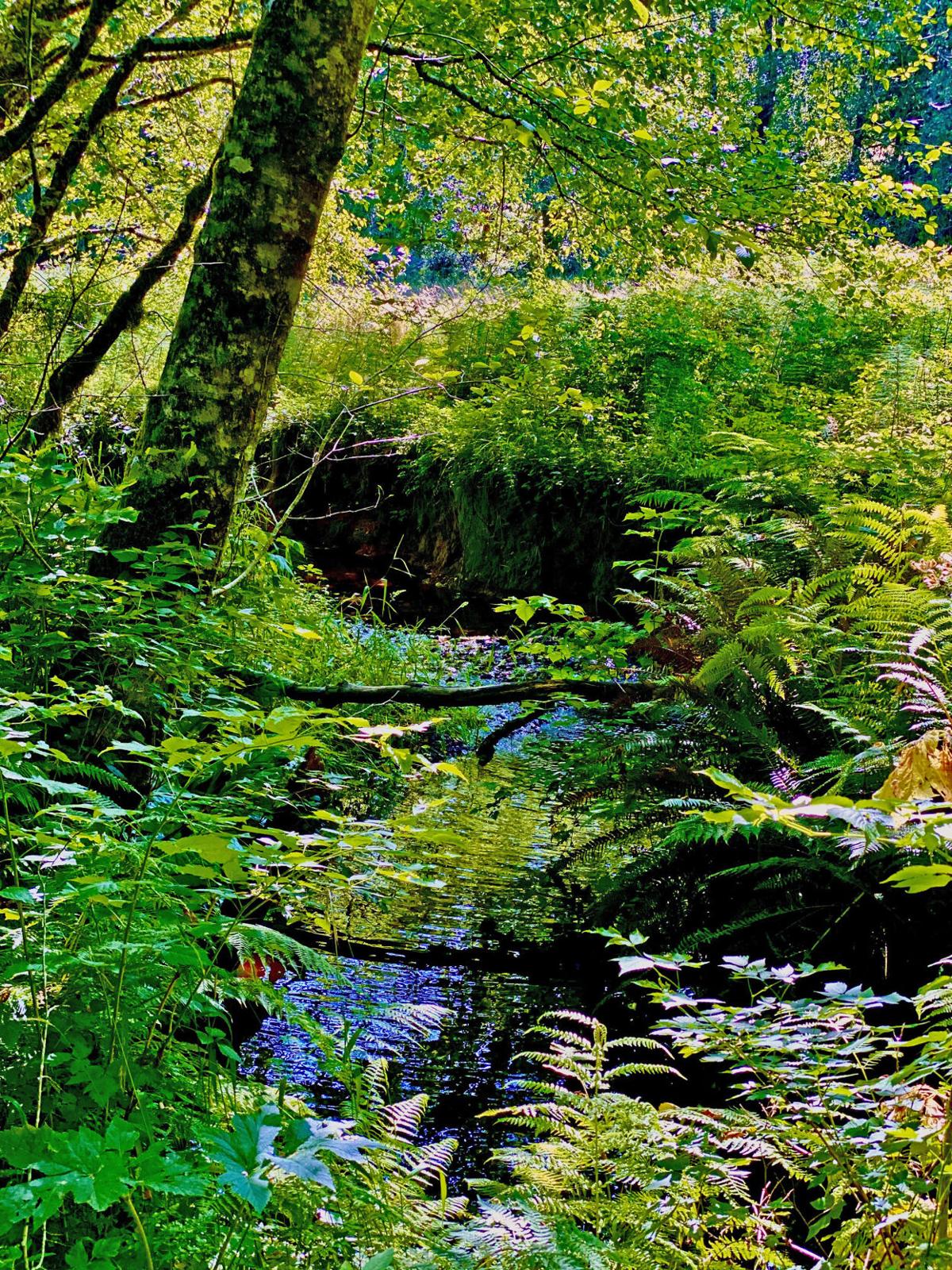 A sluggish stream meanders through lush vegetation near the upper end of Deep River. It’s hard to catalogue the bounty of such diverse flora.

The Holy Trinity Evangelical Lutheran Church sits just off West Deep River Road. Built between 1898 and 1902, it remains a popular place for concerts and other neighborly gatherings in Western Wahkiakum County.

A large U.S. flag on the side of a barn signals the patriotic feelings of a Western Wahkiakum County landowner.

Near the mouth of Deep River where it enters Gray’s Bay on the Columbia, a dinghy is tied up on the rotting remains of a floating dock. A nearby resident reported fishermen are catching big white sturgeon in a hook-and-release fishery.

Outhouse doors at the pioneer church in Deep River signal the strong influence of Finnish immigration in the local communities.

The sign says it all: The farther a walk extends into the Willapa Hills, the wilder things become.

A carpet of deep green lulls natural sounds into a summer soliloquy.

A sluggish stream meanders through lush vegetation near the upper end of Deep River. It’s hard to catalogue the bounty of such diverse flora.

How to get there

Deep River snakes from Grays Bay to its headwaters in the Willapa Hills, first up Oneida Road until it crosses State Route 4, five or six miles east of Naselle. Look for West Deep River Road. Three miles off SR 4 and continuing up West Deep River Road, you will find the pioneer Lutheran church. Continue following the west branch of the road until it runs out of gravel. Walk as far as your legs will carry you. Bring your camera and feast on the beauty.

Down these country roads, the natural world seems to seep in. The boys — Matt, Bob and I — were engaged in our Sunday walk and found ourselves hiking along West Deep River Road, a few miles east of Naselle off Washington State Route 4 in what must be thought of as pure country with a Finnish twist. This was (or is, to a lesser extent) Scandinavian country.

Asphalt led to gravel. Gravel to dirt. Deep River, wide and deceptively swift at the mouth, had petered into a soft snake-like slither, impacted by simple gravity and narrowing watersheds, and the forever clinging overhanging greenery that slowed life to a breathless sing-song vestibule of summer dreams.

The undergrowth was wild and thick and alluring. I commented to one of my companions, “Isn’t this a lot like jungle?” Matt smiled patiently. “You’ve never seen real jungle, David. Never seen what 200-plus inches of rain does to a lush impenetrable environment.” I concurred but thought secretly, Well, I have seen plenty of winters when the rain gods dropped a hundred inches or more on our peninsula, and that seemed like plenty!

But that was long ago. Yes, we still get plenty of rain in the Columbia-Pacific region, but as a kid, we got more, or certainly, it seemed like more.

Memories of past hunts

My buddy, Greg Reese and I used to grouse hunt along these overgrown passages. Used to wander along deserted logging roads and crystal-clear trout streams that laced the Upper Naselle Valley. We fished steelhead on the Nemah, and trudged past old logging camps with abandoned piles of rust-clad equipment, massive in proportion to the machines of today.

We camped and hunted, but mostly, we explored. Old growth still abounded. I remember one ancient fir, maybe 10-feet in diameter that had fallen across a deep canyon, nearly a hundred yards from bank to bank. Left behind because the massive tree could not easily be brought out. And there were so many others to choose from. So many giant trees — in 1900, to these pioneers, it must have seemed like a teeming timber world without end.

One can sense the former existence of the logging communities that defined the third-growth forests of today. Before the gravel roads, there were trails that led a traveler from Naselle to Deep River, or to the Grays River community. Altoona was a long hike, but folks would make a 20-mile round trip just to catch a dance or buy a few groceries. Frankford was bustling, a salmon and timber enclave like most of the others. Travel was by water. Information came by boat; came by way of the Big River, the Columbia. The mighty waterway that had been the lifeblood of Native Peoples from time beyond memory was no longer called the “Illahee.” One way of life had been replaced by another. Now the trees came down in untold numbers, those ancient ones, many eons old.

We passed their ancestors as we traveled up the west branch of Deep River Road: stately cedar and hemlock and Douglas fir. White-skinned alder crept in and then extended their pale branches over the roadbed. Delicate leaves fluttered in a soft wind. Old barns emerged from the shadows, and bramble crisscrossed the overgrown fields that had once provided early farmers with sustenance.

The new houses had gardens, pickup trucks, boats and trailers. Satellite dishes. A huge American flag hung from a hundred year old barn. Neighbors most likely were friendly and possibly nonpartisan with each other, at least I hoped so.

Other than a horse leading a couple (one being an ex-rock star who had chosen a more secluded lifestyle and rural community involvement — a noble cause), we saw no other form of homo sapiens. No moving cars or tractors. No smoke from chimneys. It was summer and living seemed easy. And, other than a bevy of bird song, silent.

As a Boy Scout, we scampered along trails that meandered through the ravages of clear cut logging. Wandered down into the sleepy village of Frankford, a ghost town. So much was still intact. One house had newspapers still laid out on the kitchen table. Brown-stained coffee cups. Some dried food in the pantry. It is rumored that a major logging corporation bought out the entire town and the tall woods that surrounded it. Others say that the promise of a railroad refused to evolve. Either way, people got up from breakfast one morning and left forever. An old pump organ could still spill out a fractured tune. It rested on a tilting floor in a large deserted house, now with paint flaking from cedar siding, the roof hogbacked. Overgrown plots of ground still suggested summer gardens. But when a logging road broke through in the sixties decade, everything came down, board by board, and long winters disintegrated the rest.

Back then, news traveled slowly. Were we at war? Had a new president arrived, or another died? It could be weeks before one heard. Sons were conscripted into the Great War. Not all came back to this frontier town. Many that did were scarred. Of course, such a plight is not old news. Nations still seem to seek conflict. Life marches on. Meanwhile, big and small waterways spill down and through the Willapa Hills, a landscape devoid of politics or opinion.

These were simpler times, the late 50s and early 60s, or so it seems in retrospect. Of course, one might take exception depending on race or sex. And soon there was the war, Vietnam, and the country erupted into conflict. Youth paraded and protested. Yes, there were small pockets of violence. Most of us believed in the message of Dr. King. Most of us simply wanted to bring our buddies home. Home alive and well and more sober than when they fell for the persuasive talk of the handsome Marine Sergeant soliciting young men from high school corridors in ‘63 and ‘64 with promises of glory.

Lives of faith and work

Our walk began at the Holy Trinity Evangelical Lutheran Church, circa 1900, a handsome relic with two outhouses labeled men’s and women’s in both English and Finnish. One cannot help but imagine the minister, speaking of afterlife or the morals in his own time and place. Of guilt and shame and everlasting glory. If only!

Life was hard, first light to dark: farming, cutting timber, catching salmon by the score from the most dangerous waters in the world. Washing clothes by hand. Skinning animals, wild and domestic. Death seemed a constant shadow, in the woods or from the tug of ocean currents at the river’s mouth, or more so, in the brutal and majestic ocean. In 1917 they had their own pandemic. Hard working men and women accepted dangers bluntly.

But those thoughts were distant when in my youth we traipsed into the tamed wilderness of Pacific and Wahkiakum counties, into the deep green. We felt free. We felt happy. Through rain or shine we gathered around a large campfire and told the white lies boys share among themselves. Lies about the pretty girls in math class (they love me — they love me not). About touchdowns, baskets and beer. Those years seemed like the best of times.

Homeless Americans among most vulnerable in pandemic

Parents torn over sending kids back to school