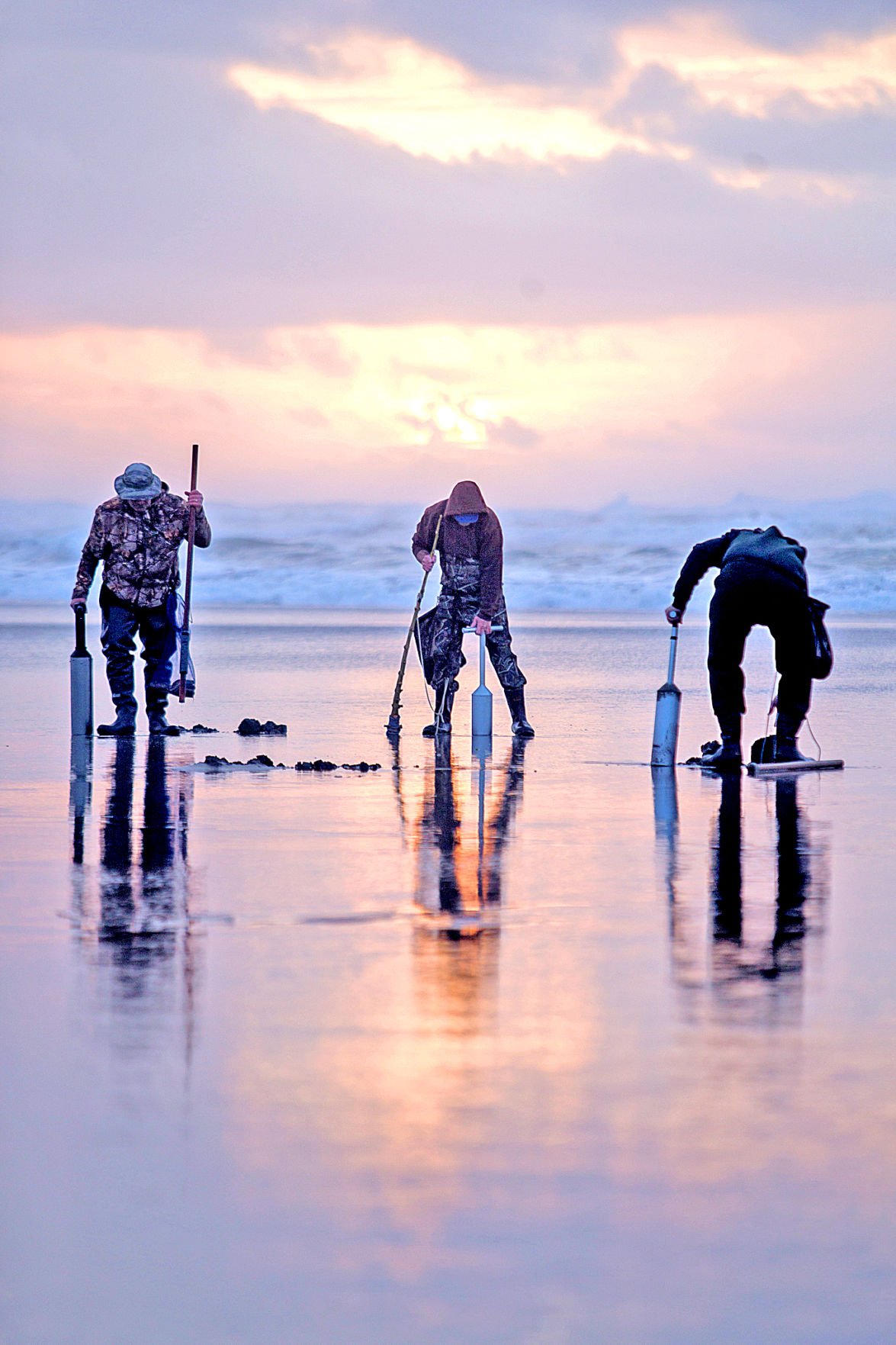 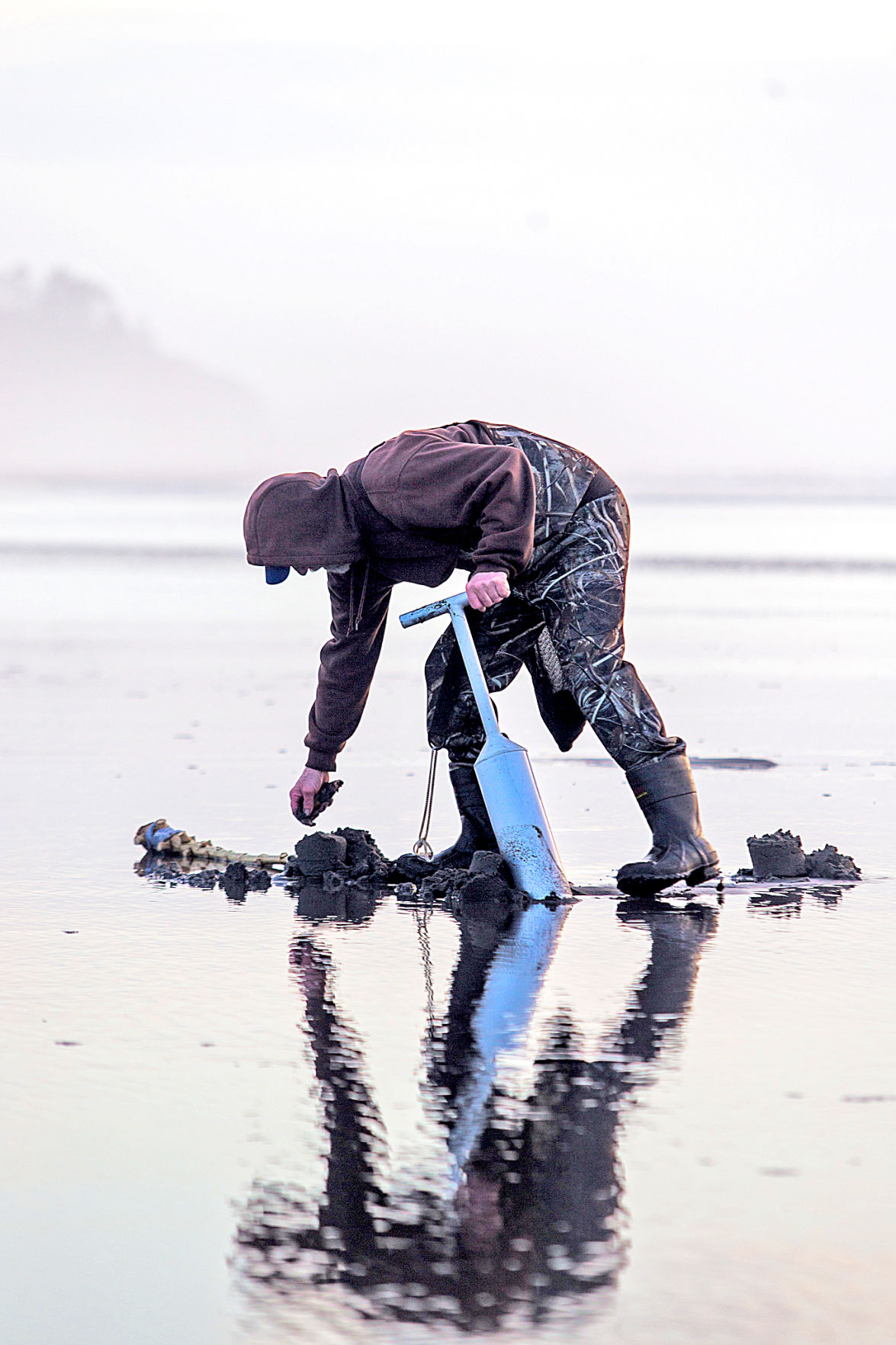 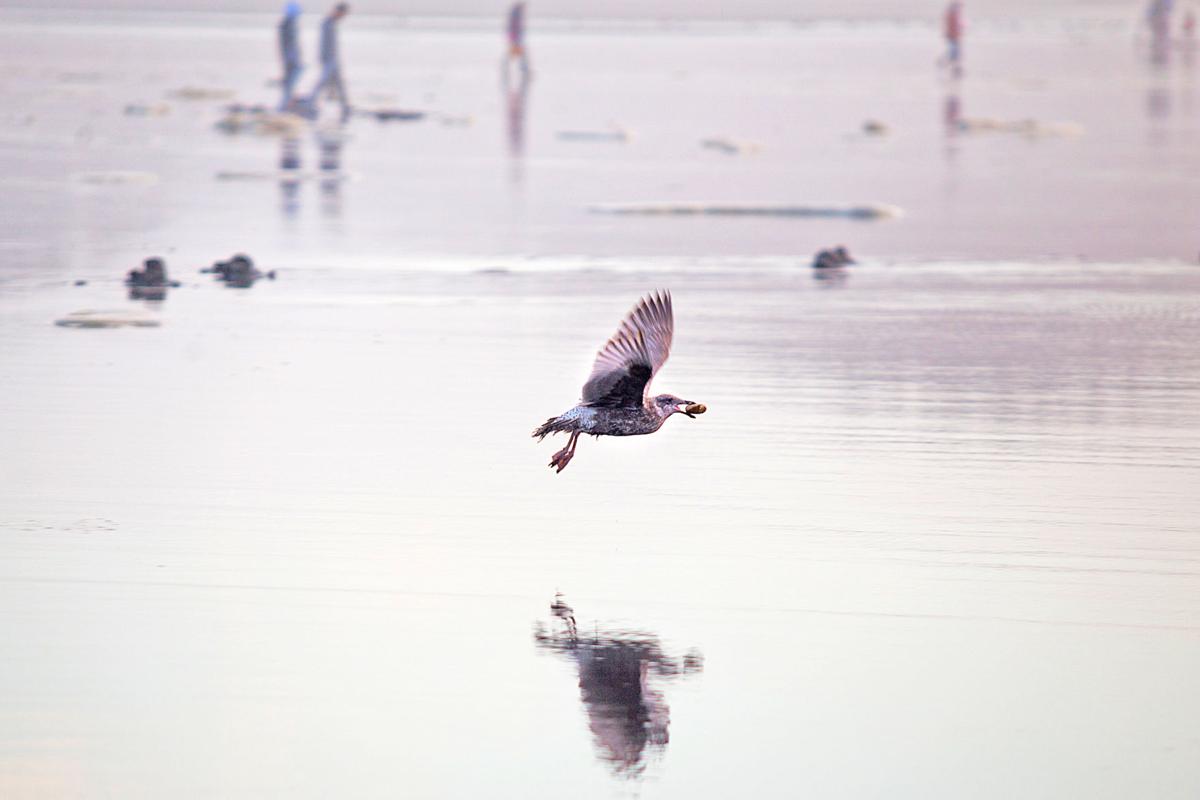 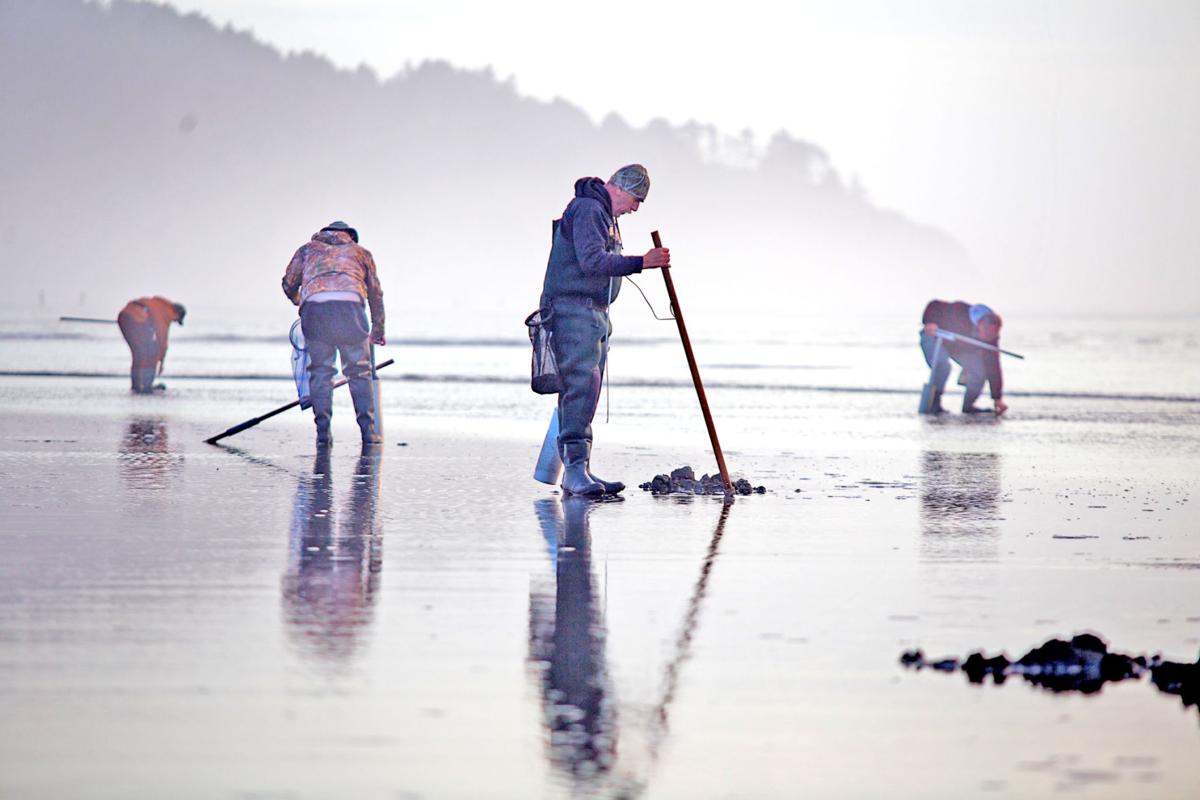 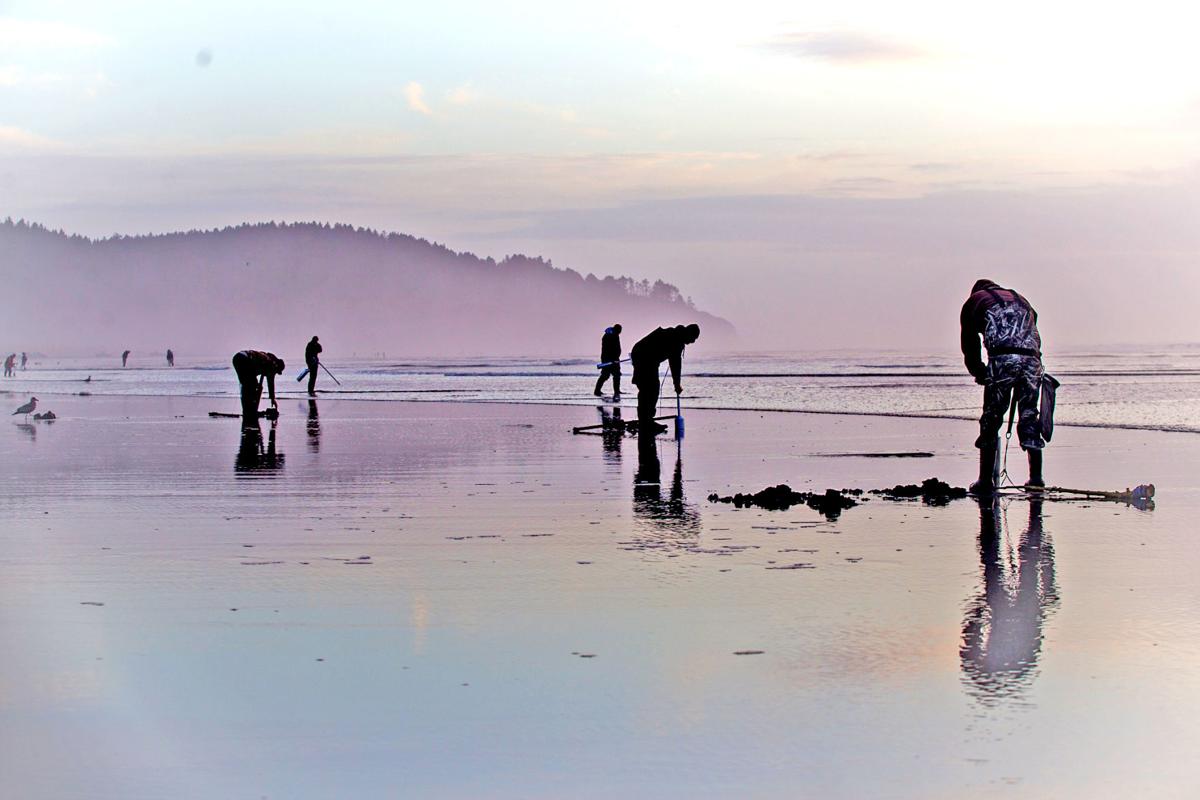 A razor clam is a wily critter not as fast as Wile E. Coyote, but still pretty crafty. Like my cat, a clam avoids human contact, other than on its own infrequent terms. A razor clam is an artist at avoiding the sauté pan. When the weather is fair, the stars in place, and the tides correct low and minus, well, then it ain’t so hard.

A cold hard wind gusts out of the southwest, swelling the wave tops. The tide is a moderate low, say a one-inch holdover. You leave your toasty car, put on your cold clamming gear and head to the edge of the ocean. Wind and spray are in your face. Your fingers are already numb. You expect the digging will be like the last set of wondrous tides — that is you’ll be able to easily spot the clams, with their large, round, indented holes.

Of course, nothing is showing. Folks are stomping literally across the beach near the surging surf. Occasionally the tide rushes in, and the cold water spills into their rubber boots. Sometimes the waves are high enough that they steal a clam digger’s sack.

Old timers dig the surf. They wear waders, and are skilled at spotting the smallest and most imperceptible holes. They will throw the blunt end of their clam shovel into the ebbing saltwater and wait for the clam to make a hasty retreat.

When the bivalve does run away straight down and listing to the west the unisex clam leaves a trace of a hole, kind of an inverted dimple. That’s when the digger strikes. That human being gets plenty wet and appears sort of like a Civil War veteran or incarnation of a battered soul. If he or she goes into the grocery store to pick up smokes or a package of Doritos after the dig, people avoid them, fastidiously.

Good clam-diggers position their shovels four inches (give or take an inch) on the west side of the hole, dig the first shovel deep (extracting sand) and follow with a delicate second, as not to break the shells.

They slip their fingers into the hole and hopefully pull the clam up by its neck. It is generally advisable to pick the larger holes: larger clams mark their territory with a larger showing, most of the time. Clamming is like fishing: Ultimately there are no universal guidelines.

There does happen to be one rule that is enforced: You may only dig 15 clams. Washington Department of Fish and Wildlife officers love to enforce that rule. And they should; 15 clams go a long ways. (The fines are also hefty.)

Once at home, pull up your sleeves and clean the clams. Be assured: It’s easy. Watch that you are not squirted with a brown oozy mess that resembles spitting tobacco. Don’t press the digger too hard. A quick bath in boiling water releases the shells. Do it quickly so as not to cook the clams. Cool immediately with ice water.

Fillets are cooked a number of ways. The most common is the triple dip. That is, dredge the clam in flour. Dip it next into an egg-wash mixture, and then tumble the fillets in cracker crumbs. Sauté these clams in a hot pan with olive oil. Brown lightly and remove. At the last second, I love to sprinkle a small amount of Parmesan cheese over the sautéed clam. This isn’t common, and you could probably turn me into the cooking authorities for some form of malfeasance.

I like the clams simply prepared. Dip them in rice flour. That’s all. Sauté these tasty morsels in olive oil infused with garlic. Sprinkle with Kosher salt and cracked pepper. I often make a dipping sauce with a little ketchup, stone-cut mustard and chipotle. Thin the dipping sauce with a small amount of sweet soy.

Here is the one nobody does: Throw the cleaned clam in hot virgin olive oil in a non-stick pan. Turn after seconds. Turn again. Remove thereafter. Crack fresh pepper and sprinkle with sea salt and eat the delicious flesh with a homemade relish or salsa. Eat with relish, or relish what you eat. Your choice.

Even if there are no clams to behold, I’ve never experienced an evening or morning on the beach that I didn’t love. But if you’re lucky, there is no better sautéed flesh than a fresh-out-of-the-ocean razor clam.

Sara Sidner chokes up after reporting from hospital