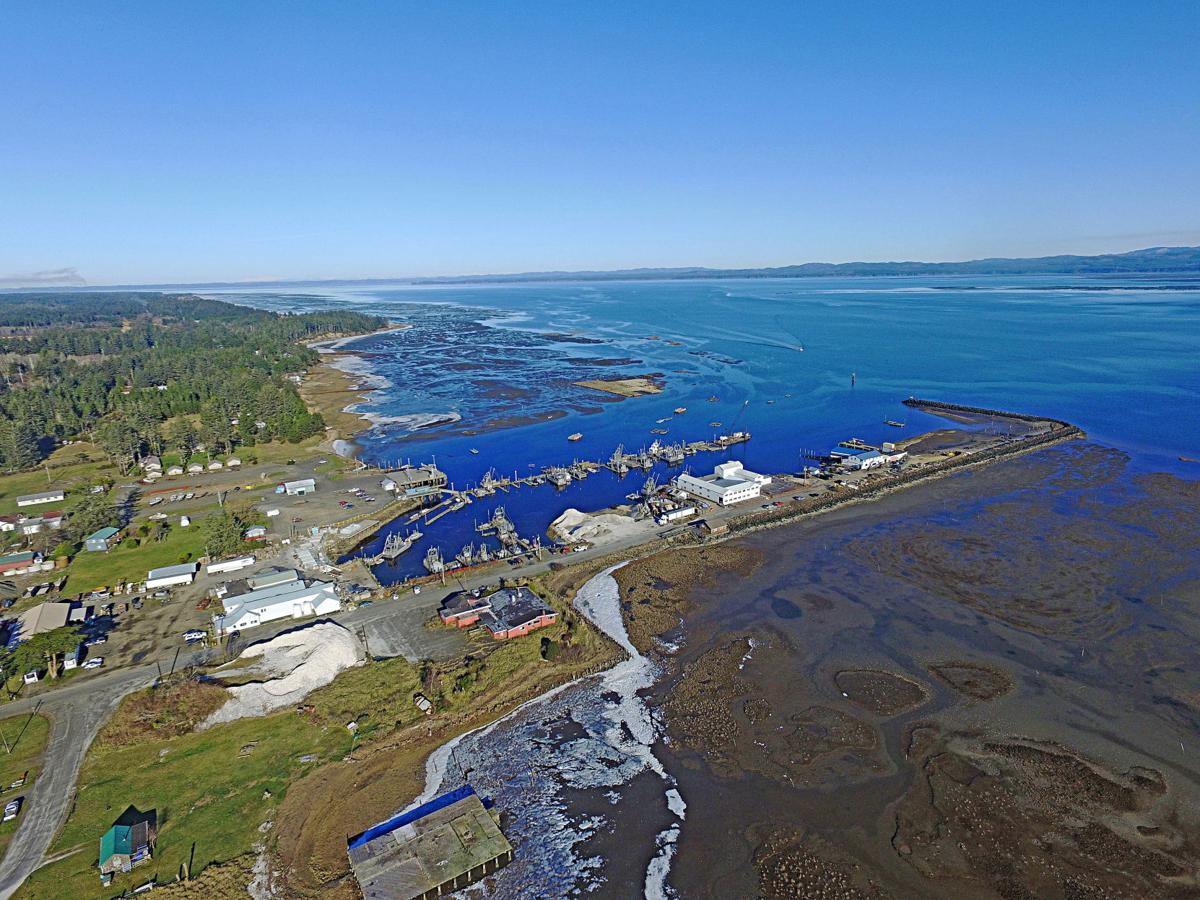 The Port of Peninsula in Nahcotta was photographed by drone camera on a frosty day earlier this month. Drones provide comparatively affordable aerial views, but come with some interesting regulatory issues. 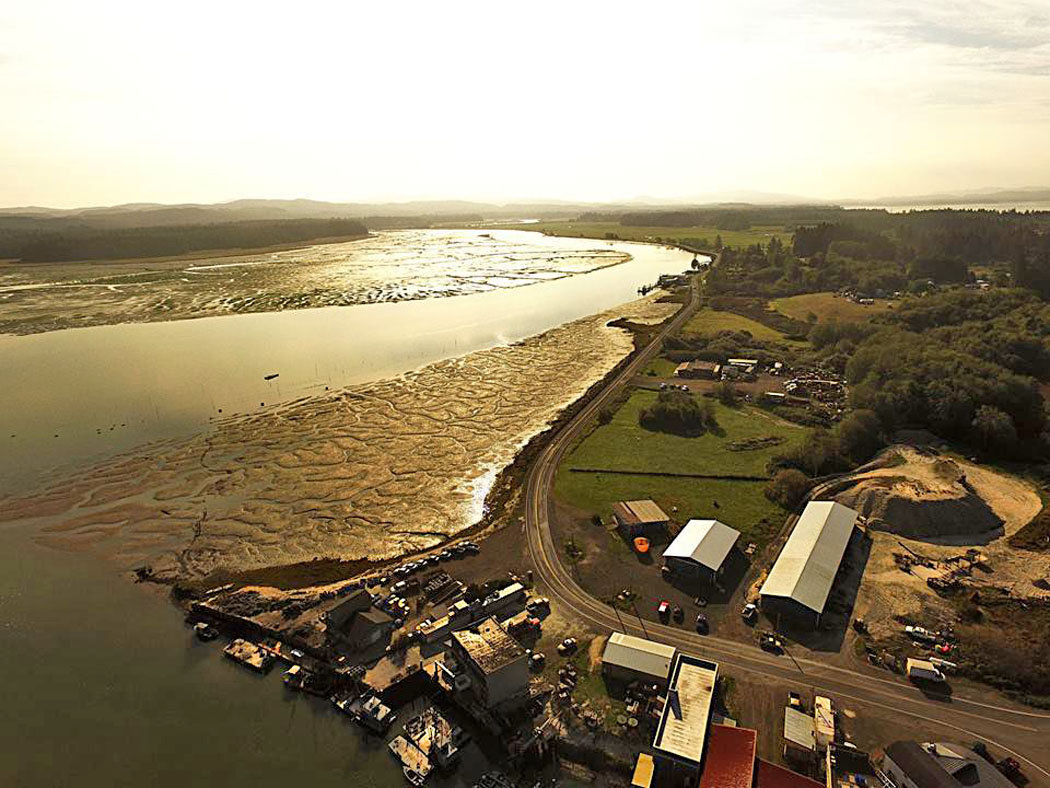 Bay Center and the Palix River are home to some of Pacific County's oyster operations. 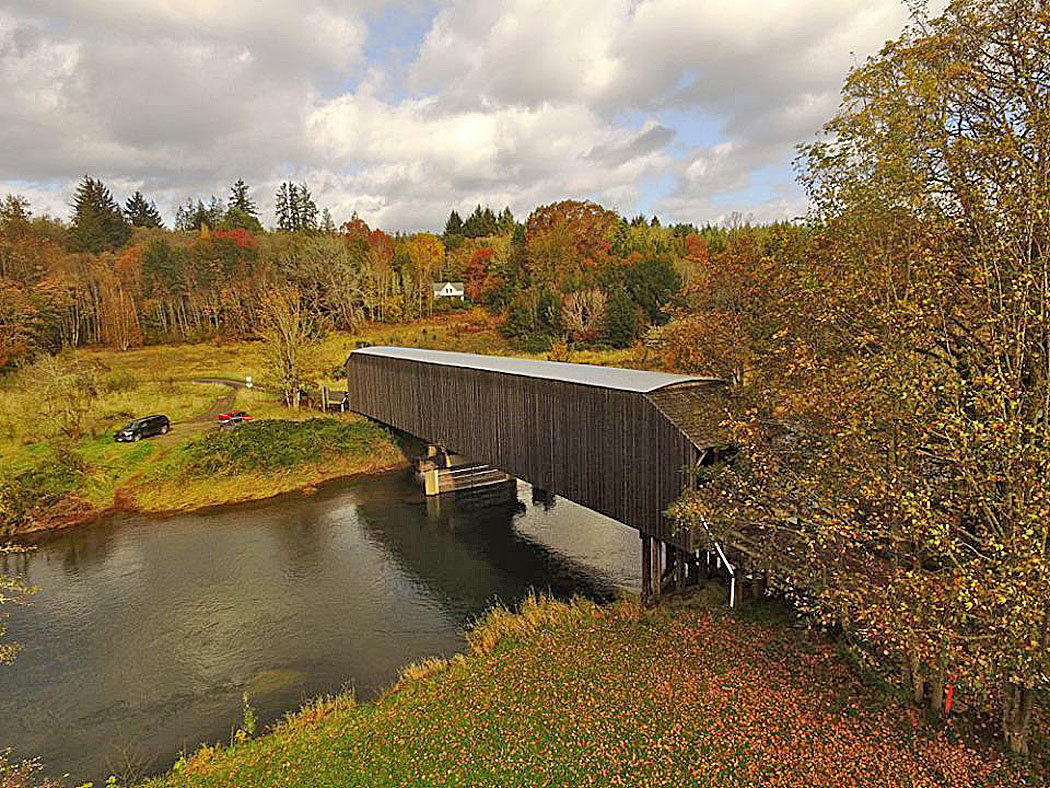 The Grays River Covered Bridge in Western Wahkiakum County is a remarkable survivor and serves as a centerpiece of rural community life. 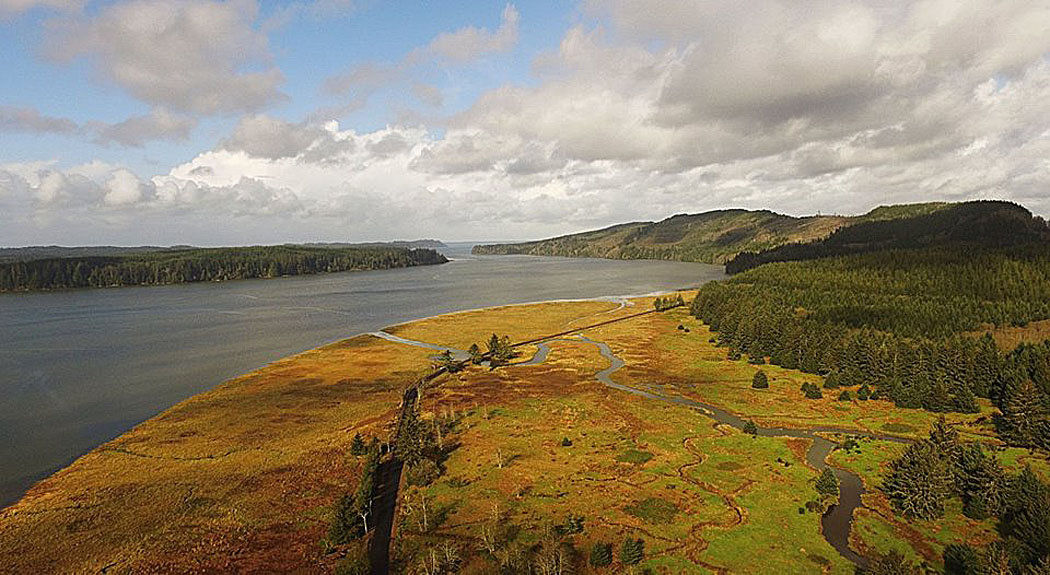 The Naselle River, one of the main tributaries of Willapa Bay, offers spectacular Pacific Northwest scenery. 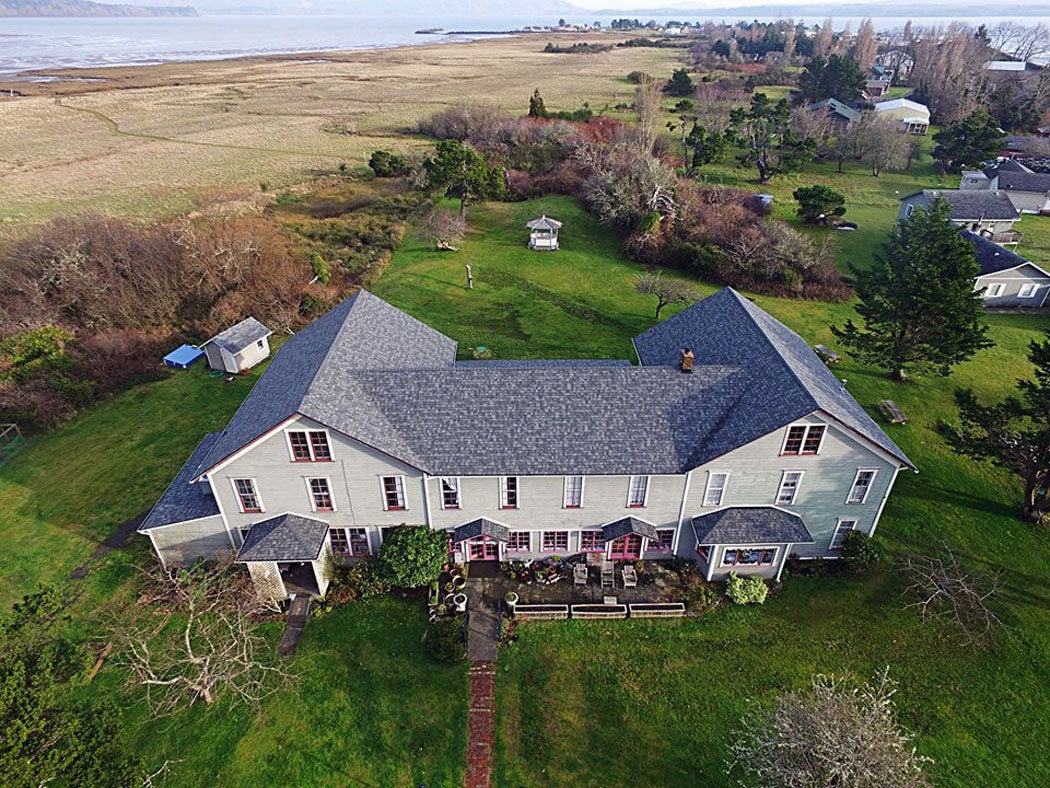 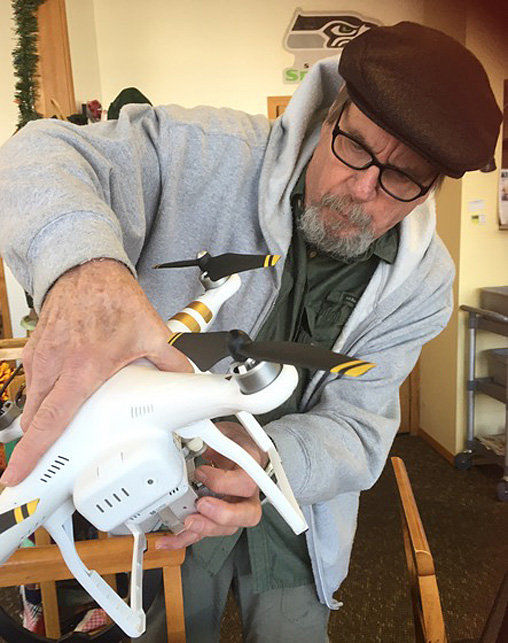 Bob Duke places the battery in his Phantom 3 drone, used for aerial photography. 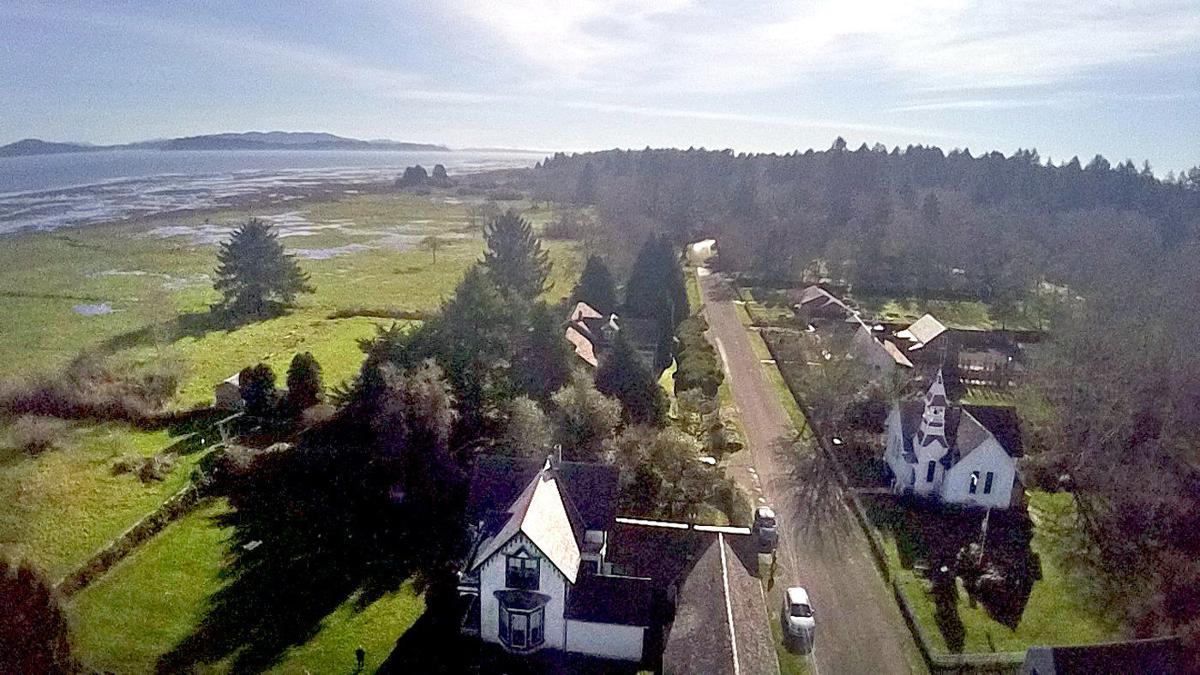 The Port of Peninsula in Nahcotta was photographed by drone camera on a frosty day earlier this month. Drones provide comparatively affordable aerial views, but come with some interesting regulatory issues.

Bay Center and the Palix River are home to some of Pacific County's oyster operations.

The Grays River Covered Bridge in Western Wahkiakum County is a remarkable survivor and serves as a centerpiece of rural community life.

The Naselle River, one of the main tributaries of Willapa Bay, offers spectacular Pacific Northwest scenery.

Bob Duke places the battery in his Phantom 3 drone, used for aerial photography.

Unmanned Aerial Vehicles, also known as drones, have been roaming the skies for years. But with the popularity of affordable, camera toting model aircraft available to the general public, they literally exploded on the national scene over the past couple of years. A year ago, in anticipation of what seemed may become an epidemic of errant projectiles cluttering our airspace, the Federal Aviation Administration rolled out sweeping regulations governing their use.

A year later, with the dust settling, we have a clearer idea of how drones fit in with our environment. Are they truly a hazard? Are they everywhere? How can one become a drone pilot? Is that drone over my backyard suppose to be there? And, has the dust really settled? Let’s break it down.

Hobby enthusiasts and photographers make up the majority of drone pilots today. Over 80 percent of UAV are small, under 3-pound craft manufactured by DJI of China. They are controlled via WiFi connection through a smart phone, and are subject to many regulations. Many of these regulations are built into the operating systems software, also referred to as firmware. A drone purchased from DJI today will not operate above the FAA mandated above ground limit of 400 feet. Nor will they operate within 5 miles of a major airport. But while many restrictions are built in, safe and responsible operation is the responsibility of the pilot at the local level.

Put simply, drones can be hazardous. And in cases, annoying. Operating in controlled airspace is hazardous to civil and military aircraft. If drones are operating near emergency situations requiring helicopter operations, the helicopters will not fly. Drones may be disruptive to wildlife, and they raise the issue of invasion of privacy.

Drones offer a unique perspective for the amateur photographer, and are deceptively easy to fly. Their built-in GPS, ground recognition sonar, stabilizing gyroscopes and accelerometers assure that the beginning pilot will have success right out of the box. They have an amazing number of autonomous functions built in, available to the pilot with the tap of a button. But when one or more of these systems fails, and they do, these wonderful $1,500 marvels may simply fly away, never to be seen again. This is known among drone pilots as “flying back to China.”

Worse, it may find its way into unwelcome areas like high-power lines, sensitive wildlife habitat, moving automobiles or the picture window of a neighborhood house. To assure accountability, the FAA began, a year ago, requiring that all unmanned model aircraft, including drones, be registered. Actually, it is not the drone or model aircraft that is registered, but the operator. He or she is issued one number that must be displayed on all aircraft operated by that individual. If a neighbor is flying anything that weighs between half a pound and 55 pounds without a registration number, he is flying illegally, according to the FAA. Fines and/or damages incurred can be quite high.

Do UAV operators need a special license to fly? When flying model aircraft for fun, including rotary craft such as helicopters and drones, no license is required. Recreational fliers operate under the FAA Special Rules for model aircraft and do not need permission to fly, but must read and understand all safety guidelines. The Academy of Model Aeronautics, AMA (www.modelaircraft.org), governs the operation of model aircraft, including hobby drones with cameras. AMA guidelines, although closely aligned with FAA regulations, override the FAA. In addition, members of the AMA ($75 annually) receive $2.5 million liability insurance, $25,000 medical coverage and $1,000 for fire and theft.

When a drone operator accepts reimbursement for services, the situation changes dramatically, as the pilot enters the world of commercial aviation. To fly for hire, one must apply for Part 107 FAA Drone Certification. This amounts to becoming a student pilot. When one applies, they will be vetted by the TSA and receive (if they pass) a student permit. This is followed by a written test at a certified FAA test center. There are many on-line ground schools and guides to accomplishing the tasks needed to become a certified commercial drone operator. Obtaining a commercial license opens the door to a vast new world of UAV piloting.

Drones are used in a myriad of commercial operations, from crop studies and infra-red mapping to real estate photography, aerial survey, search and rescue and cinematography. Obtaining a Part 107 commercial license may not be the end, as it is fairly restrictive itself. Depending on the purpose of the commercial enterprise, additional waivers may need to be obtained. But for certain, a person operating for hire is no longer protected by AMA guidelines and insurance.

If a drone is flying in your neighborhood, it may be flown by a hobbyist or a commercial enterprise. Don’t be afraid to ask the pilot what his intentions are, and ask for appropriate documentation. In any case, he may not fly over your property without your permission. Infractions of FAA regulations may be reported. If someone’s UAS crashes in your yard, hurts someone or damages property, or is flown in a reckless manner, report it to the local police, who will report to the FAA.

Are drones a problem in the rural community of Pacific County? According to statistics, no. A check of a recent FAA listing of registered drones shows a grand total of 24 in all of Pacific County, with 17 on the Long Beach peninsula. And they may not all be drones, as operators of all radio-controlled aircraft must register. A check with Long Beach police Chief Flint Wright revealed that there have been no complaints of improper UAV activity.

“We don’t have an issue with them,” says Wright.

Perhaps the biggest problem facing recreational drone pilots is, “Where can I fly?” The current mood of regulators makes that list smaller than “Where can I not fly?” Large gatherings like sporting events, parades, kite festivals and car shows must be avoided. To fly within 5 miles of an airport, even one without a control tower, one must notify the proprietor of the airfield. In the case of the vicinity of Ilwaco, that would be the Port of Ilwaco. Smart phone apps are available that show restricted areas.

Parks agencies all have a different approach. National Parks prohibit all model aircraft, except in designated areas. Some parks are setting aside special areas for the aerial photographer. One may go on-line to check with specific situations but be aware that the rules are changing constantly. Check the date of the publication. You don’t have to scroll down very far to find out of date material.

Cape Disappointment, for example, allowed drones at the beach, last year. Now, one must apply for a “Film Permit.” The application is available on line. The purpose, according to Rebecca Vessey at the Cape D gate, is to protect sensitive nesting areas. Flying near the lighthouse, therefore, is prohibited. The Washington State Legislature is currently drafting its own rules. Although largely redundant to federal laws, they will facilitate enforcement at a more local level.

The U.S. Forest Service has the most liberal policy. Their website, www.fs.fed.us offers guidelines for drone operations on Forest Service land. Permission is granted at Mt. St. Helens, for example, with a caveat; you are not allowed to step off designated paths. Should a drone land where it cannot be reached, retrieval could be a costly enterprise.

On the other end of the scale, don’t even think of flying over the Willapa National Wildlife Refuge. It exists for the protection of wildlife and wildlife habitat. That excludes 15,000 acres of land in Pacific County. Considering the sensitive nature of this habitat, violators should be reported.

Drone rules and regulations, as well as drone technology, is changing rapidly. The dust has not settled, but we can be sure that UAV activity is here to stay. Keep looking up.

Gupta on CDC director statement: You've got to be kidding me

Doctor on Covid-19: There is a propensity for blood clotting