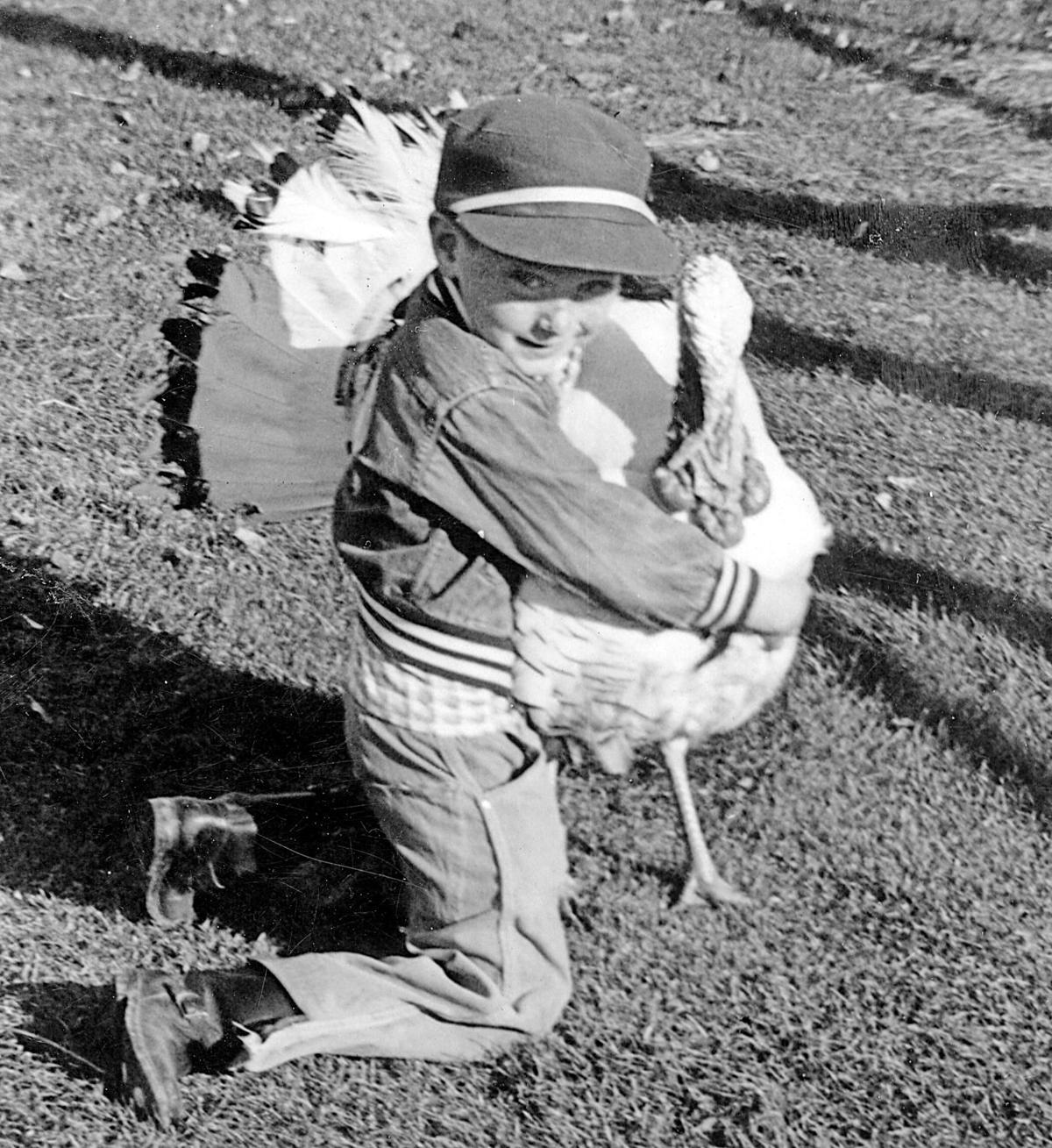 Greg Winters has always been fond of family turkeys, and revived the tradition of raising them ‚ though as pets rather than food. 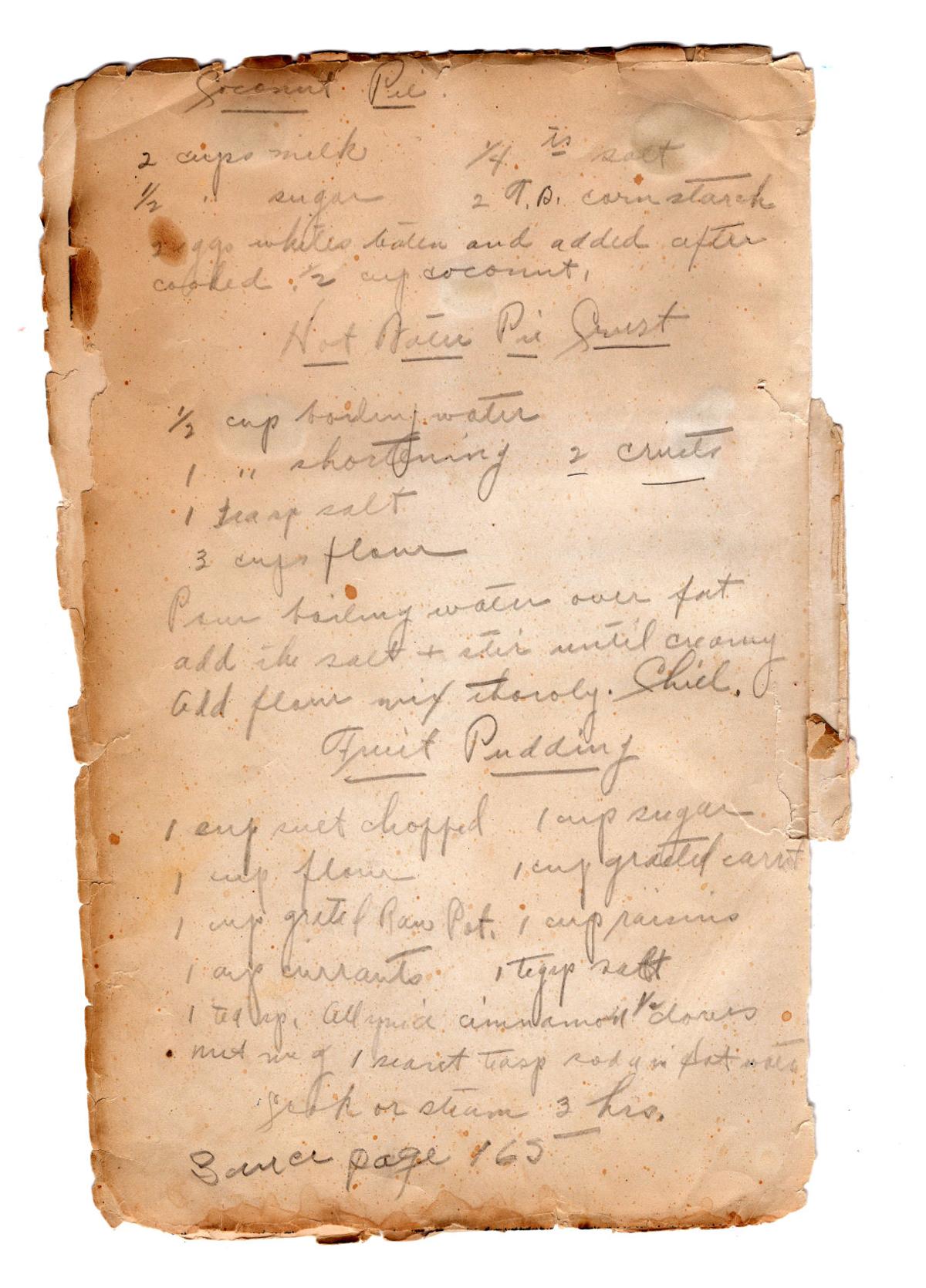 Matt Winters’ Grandma’s fruit pudding recipe is on the bottom third of this pages from her tattered and fire-singed 1920s cookbook. The coconut pie recipe on the top of the page is pretty great, too.

Hilda Bell’s pudding sauce recipe requires patient stirring on a warm stove burner. The result is something approaching nectar of the gods. 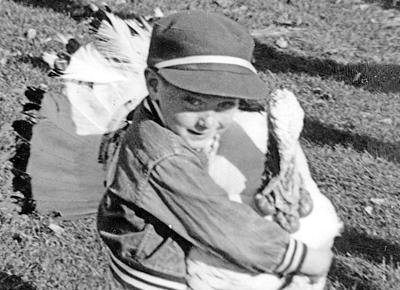 Matt Winters’ Grandma, Hilda Bell, protects him from a mean turkey in her farmyard near Lander, Wyoming in about 1960.

It’s getting to be time for Grandma Bell’s pudding, along with mincemeat, Tom & Jerrys and other delectable treats that are a shade nauseating in any month other than December. We’re in the season of feasting, of nostalgia-flavored foods from the “old country,” wherever that happens to be.

With the aid of my grandmother’s taped-together 1920s cookbook and more recent recipe cards that preserve Mom’s beautiful “Palmer Method” handwriting, these coming weeks are my own personal take on “The Great British Baking Show” — the addictive summer-long competition between 12 amateur bakers gathered in a castle-like tent in the green English countryside. Like them, I’ll have many failures, a few showstopper wins, and will visibly swell in size from one week to the next like yeasty dough in a proving drawer.

Grandma wasn’t much of a letter writer, far less a memoirist. Born on April 1, 1901 — she always proudly declared herself an April fool — she graduated from high school and was entirely literate. But her memories live on in the form of her recipes, and grandchildren who savor delicious thoughts of pot roasts and bread-and-gravy served at a farmhouse kitchen table. In my heart I see her sitting there still, contented smile and slowly twiddling thumbs, gazing out a wavy-glass double-glazed window at chickadees feeding on suet strung from hideous old cottonwoods in the yard.

Suet — it’s not just for chickadees and flickers. It takes a little finagling with a friendly butcher, but true suet — hard fat that forms around the kidneys of cattle — is a much-esteemed ingredient in holiday cooking in England and elsewhere in northwest Europe. It moistens and binds together flavors in a variety of dishes, including mincemeat and Grandma’s pudding. It’s also a calorie-dense power package, fuel for my ancestral family of miners in the coal pits of County Durham. (Fiona Hill’s Nov. 21 impeachment hearing testimony was a lovely taste of that distinctive regional accent and rock-hard morality so intrinsic to Mom’s side of the family.)

English pudding, by the way, isn’t anything like the creamy sweet goop bought at the grocery store, but a bread or cake-like dish that may be served as a main course or dessert, depending on what ingredients are added.

Writing for the Durham County Council (https://tinyurl.com/Durham-miners-cooking), Susan Weightman observes, “Suet puddings and savoury and sweet were a staple in all homes. Meat puddings, leek puddings, bacon puddings and gravy made substantial savoury meals. Apples, rhubarb, currants, lemon, jam, syrup or honey, and soft fruit such as gooseberries, bilberries, and blackberries were all used to make a sweet suet pudding.”

Knowing full well that my finicky fellow Americans recoil in horror at the idea of eating suet, I won’t take time to transcribe Grandma’s recipe, which is pictured here. (Vegetable shortening may be substituted if necessary, though it won’t be as good.) I can’t overemphasize the importance of the butter, cream and brandy sauce, which must be lovingly slow cooked, best over a gentle coal flame.

I have never feared or hated any living creature as much as I did Grandma’s turkey.

He terrorized me as a child like the velociraptors that stalked the kids in the original “Jurassic Park.” Nearly as big as I was, he’d come charging across the farmyard whenever he saw me, wings and legs pumping in unison, a nightmarish goblin dressed in a ridiculous feathered suit.

I don’t recall that he ever actually got me as we raced toward the swinging gate that kept livestock off Grandpa and Grandma’s lawn. But he did eventually get Grandma herself, inflicting a painful gash in her shin. And thus ended our family’s turkey-raising tradition — until decades later when it was revived by my big brother, Greg.

During the Great Depression, raising turkeys to sell was a welcome source of income for many ranch families, including ours, with women nurturing their gobbler and his harem through predator-infested winters. Come spring, or what passes for it in the mountains, these hens with wild genetic instincts tried slipping away to make feral nests in the willow thickets — Easter treats for every passing coyote and bull snake. In one of my favorite images, Mom recalled seeing a giant old snake in the pasture with four or five turkey eggs bloating his ribcage, looking like a multi-knobbed barbell.

I revere all the hard toil and worried nights that went into raising those darned turkeys, tangible evidence of love that crosses generational boundaries.

After they hatched, those turkey jakes and jennys that didn’t vacantly wander off into waiting jaws or drown in irrigation ditches would be pampered until feasting season, when sharp axes put a cap on poultry capers. Maybe the one that later hunted me was out to avenge this annual turkey Armageddon.

Loading their delicious cargoes in rickety old wagons, ranch families set off for the scales in our little town. As the train waiting to take the turkeys east to the city gathered steam at the depot, excited grownups and children hurried to the bank to exchange checks for cash. “Mom squirreled away what she could for what few presents we got,” my uncle recalled, with the bulk of the proceeds going toward that bane of rural life, property taxes.

Someone recently made the interesting observation that our maternal grandmas literally create each of us. The daughters they bear carry inside themselves all the eggs they will ever possess, including the ones that eventually become you and me. Grandma is part of who I am. She lives on in all her grateful grandchildren.

I revere all the hard toil and worried nights that went into raising those darned turkeys, tangible evidence of love that crosses generational boundaries.

Bush, long may he live

As I said, my brother revived our turkey-raising tradition.

His once bright red hair now snow white, and proudly sporting an enormous beard, Greg has to avoid malls at Christmastime to keep from being mistaken as a for-hire Santa — or maybe even the real thing.

Bighearted as the jolly old elf, he went into turkey husbandry with the realization that butchering time would be hard to face. So he named his turkeys after politicians he disliked, figuring that might make the bloody task a little easier. No such luck. They all became pets despite their names and lived out natural lives — at least the ones the foxes didn’t get.

Asking about it last week, he told me, “I were to get another turkey I will name it Nunes or Gymnasium Jordan. I should have no problem butchering them. As far as the other turkeys, we had George Bush, Cheney, Condoleezza Rice and Donald Rumsfeld.”

I think it was Bush who lived longest, tottering around with 10 pounds of turkey aboard spindly arthritic drumsticks. It seems modern hybrid turkeys aren’t really designed to live more than a few months. Bush, the Methushael of his race, was a kindly old turkey to the end, and never bullied any little boys.

Vaccinologist: Here's what worries me about Covid-19 trials