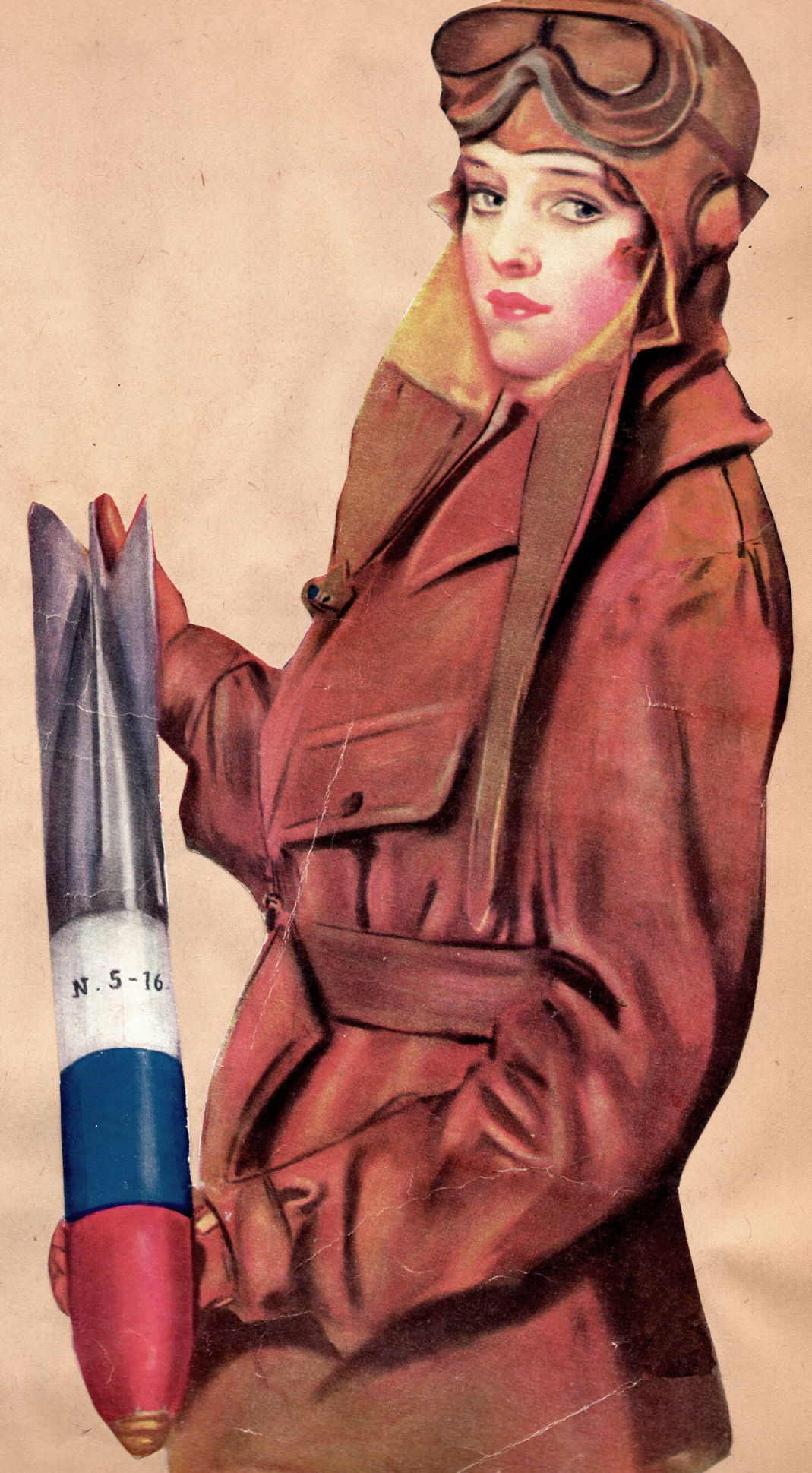 An illustration from 1917 or 1918 portrays a female pilot with a bomb made to kill hated Huns, as Allied propaganda labeled all German enemies. It hints at the growing surge in female empowerment in the U.S. in the first decades of the 20th century. 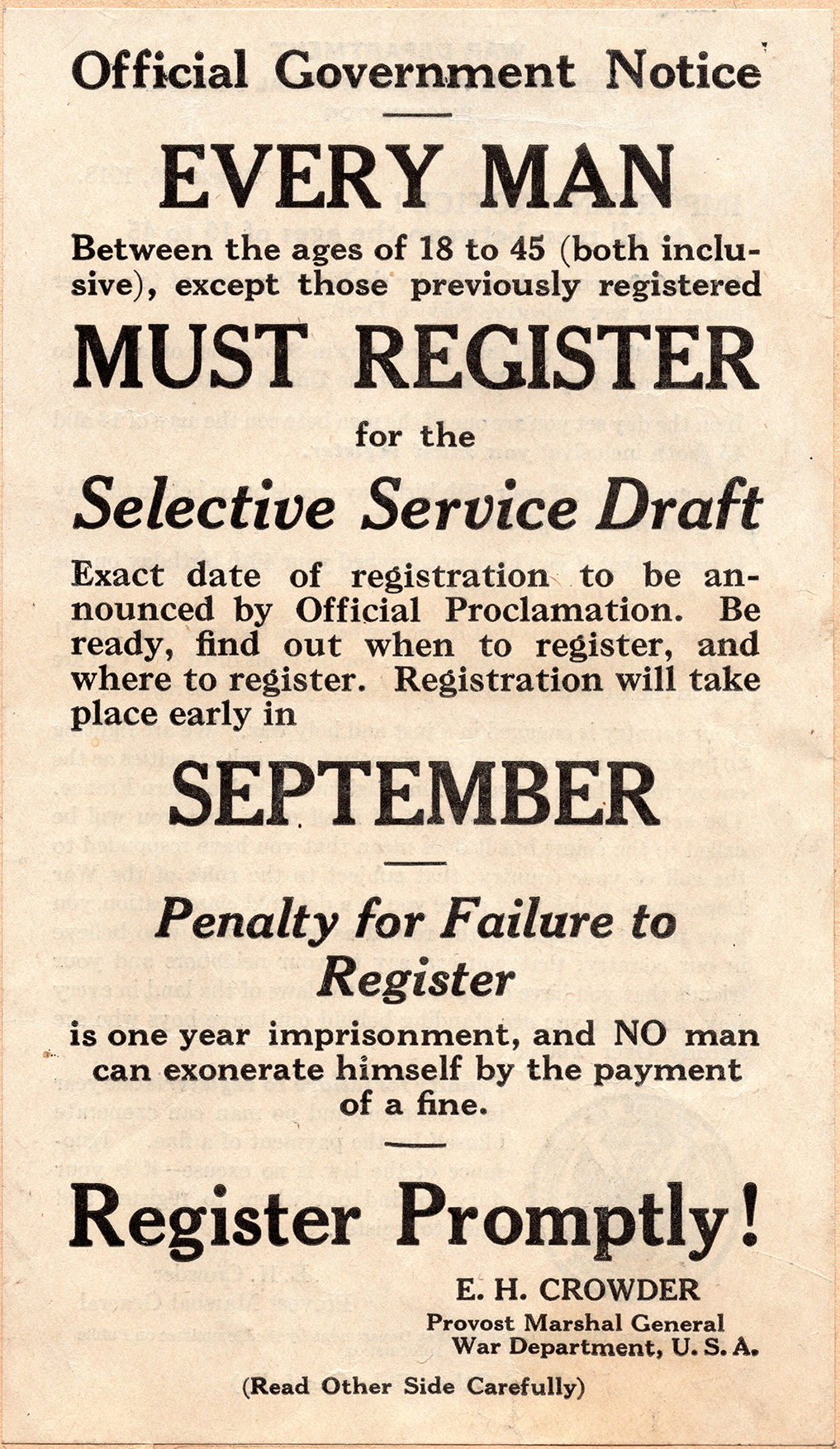 A 1917 notice advised American men to register for the draft. 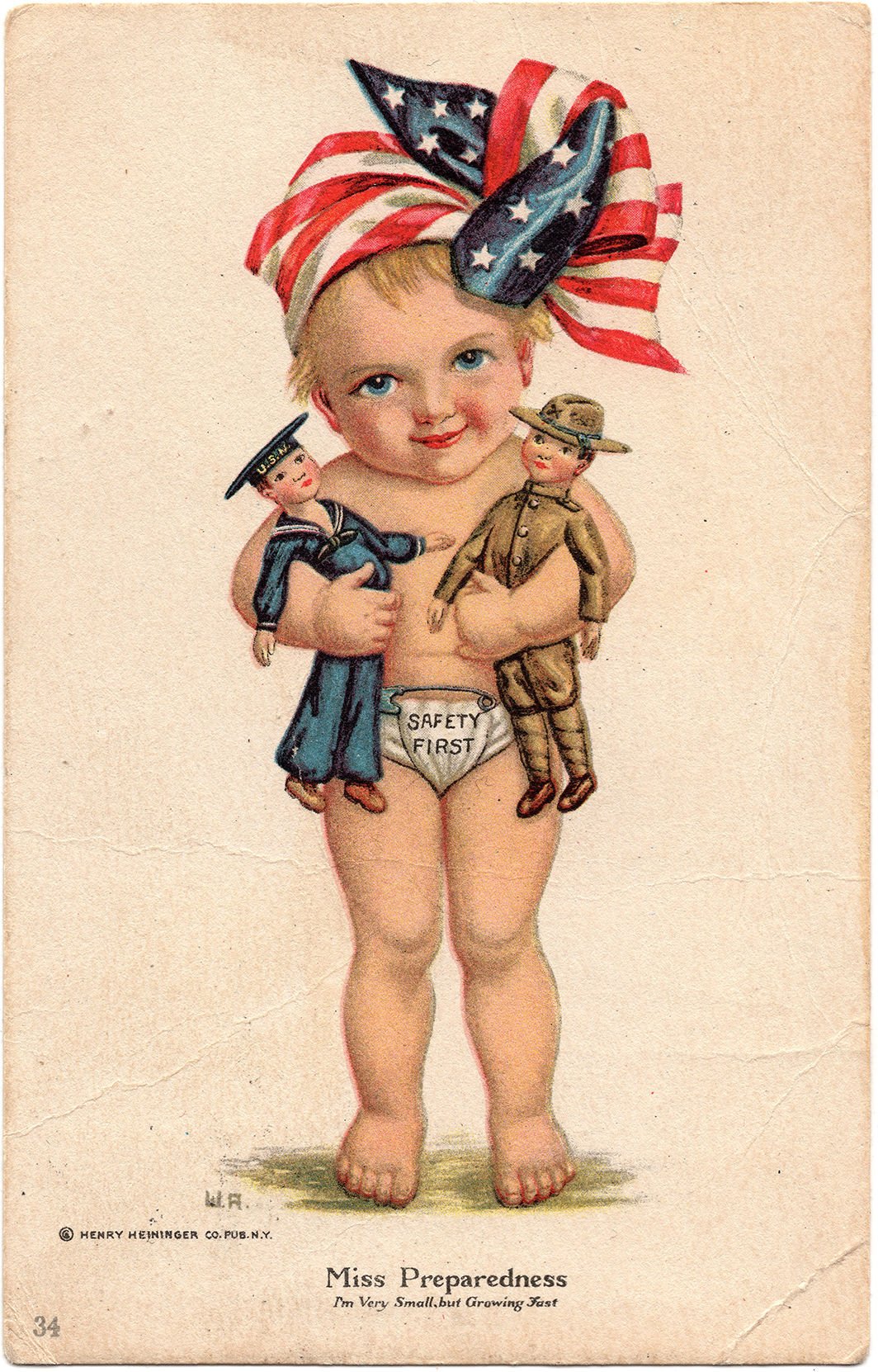 A patriotic postcard from World War I. Postmarked June 26, 1917, it was sent to Hilda Bell about a month and a half after the U.S. entered the war.

Herbert Hoover was appointed by President Woodrow Wilson to lead the nation’s Food Administration in World War I. His performance in that role was a factor in his later election to the presidency. This sugar certificate was issued to Jessie Alton, Matt Winters’ great-grandmother. 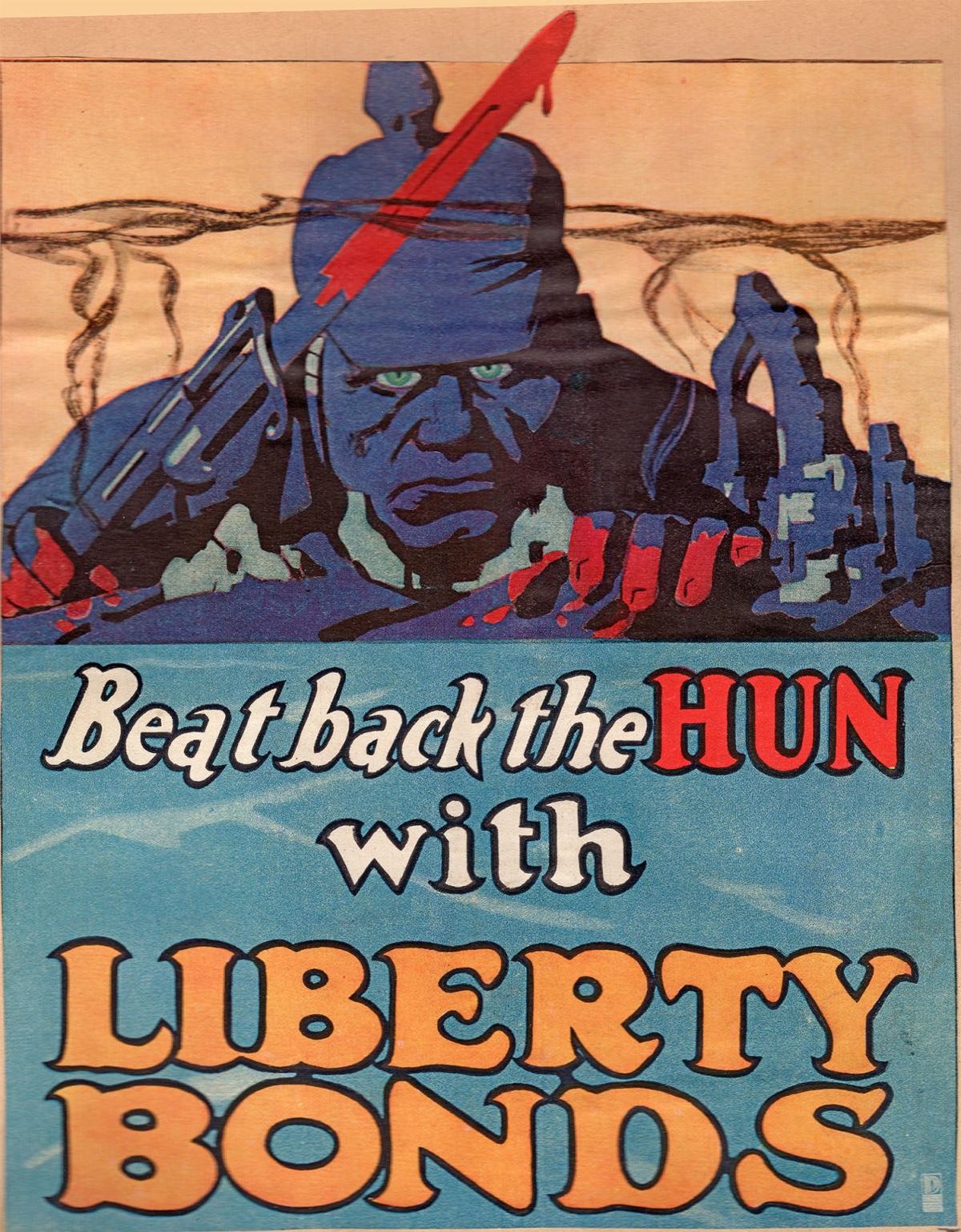 A poster pasted into a family scrapbook demonizes the German solddiers of World War I. 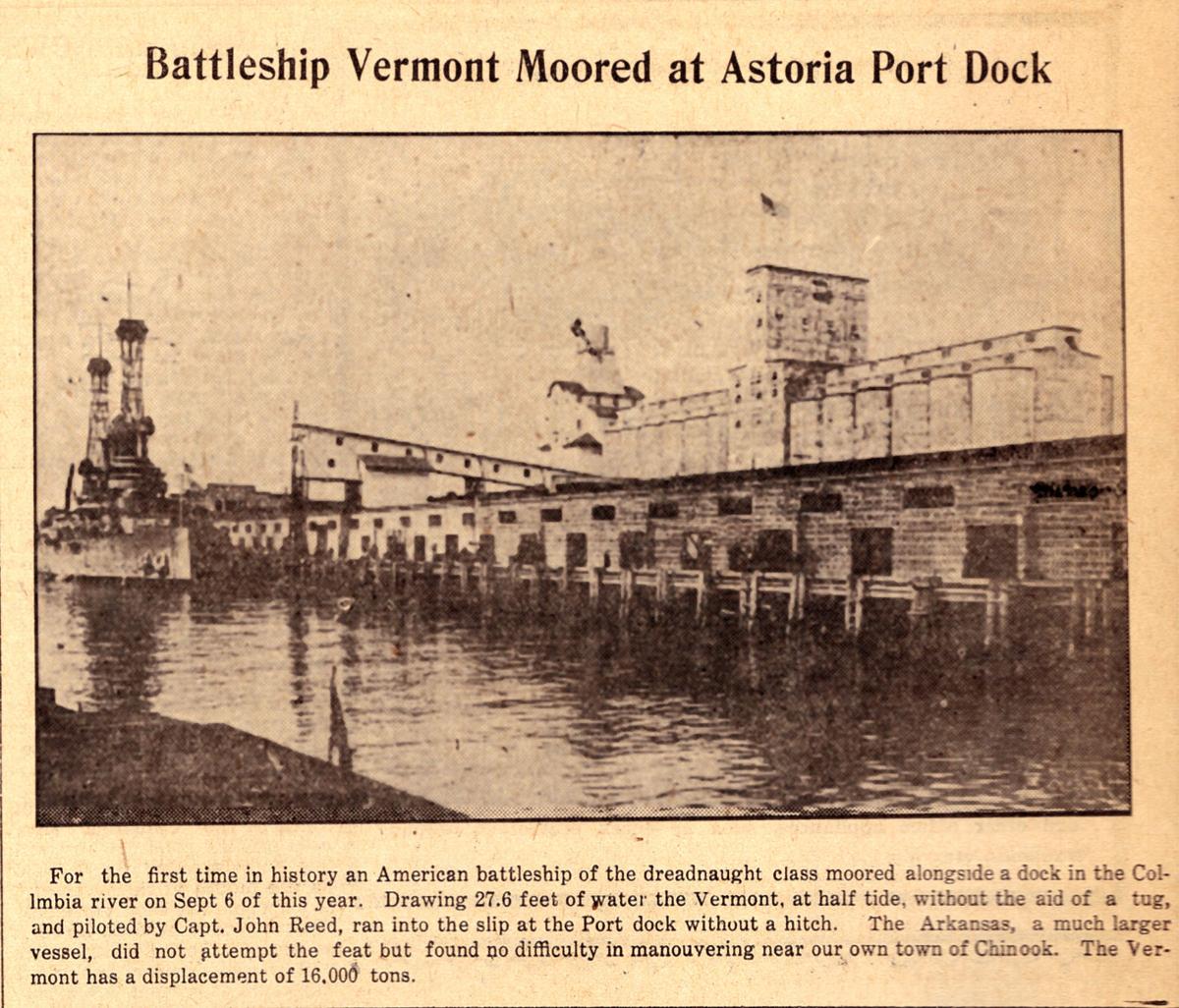 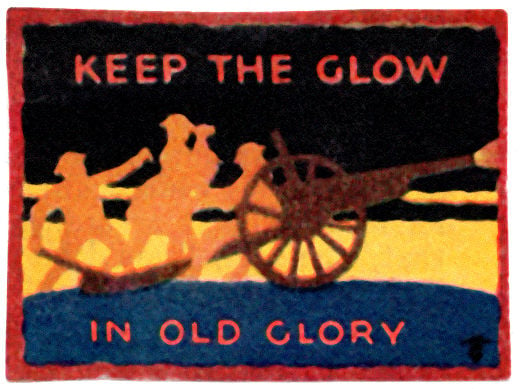 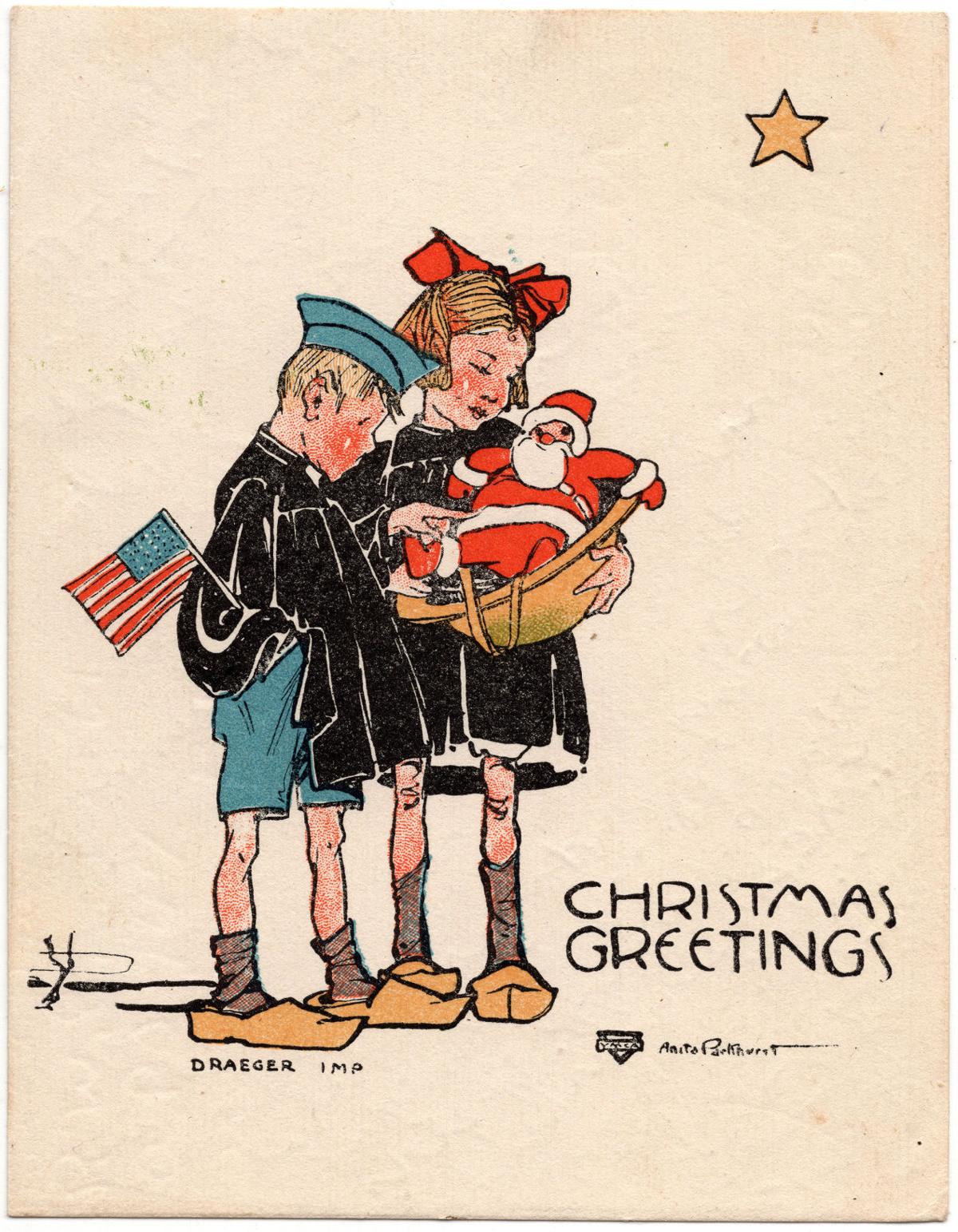 A Christmas postcard to my grandmother from a sweetheart at the front. 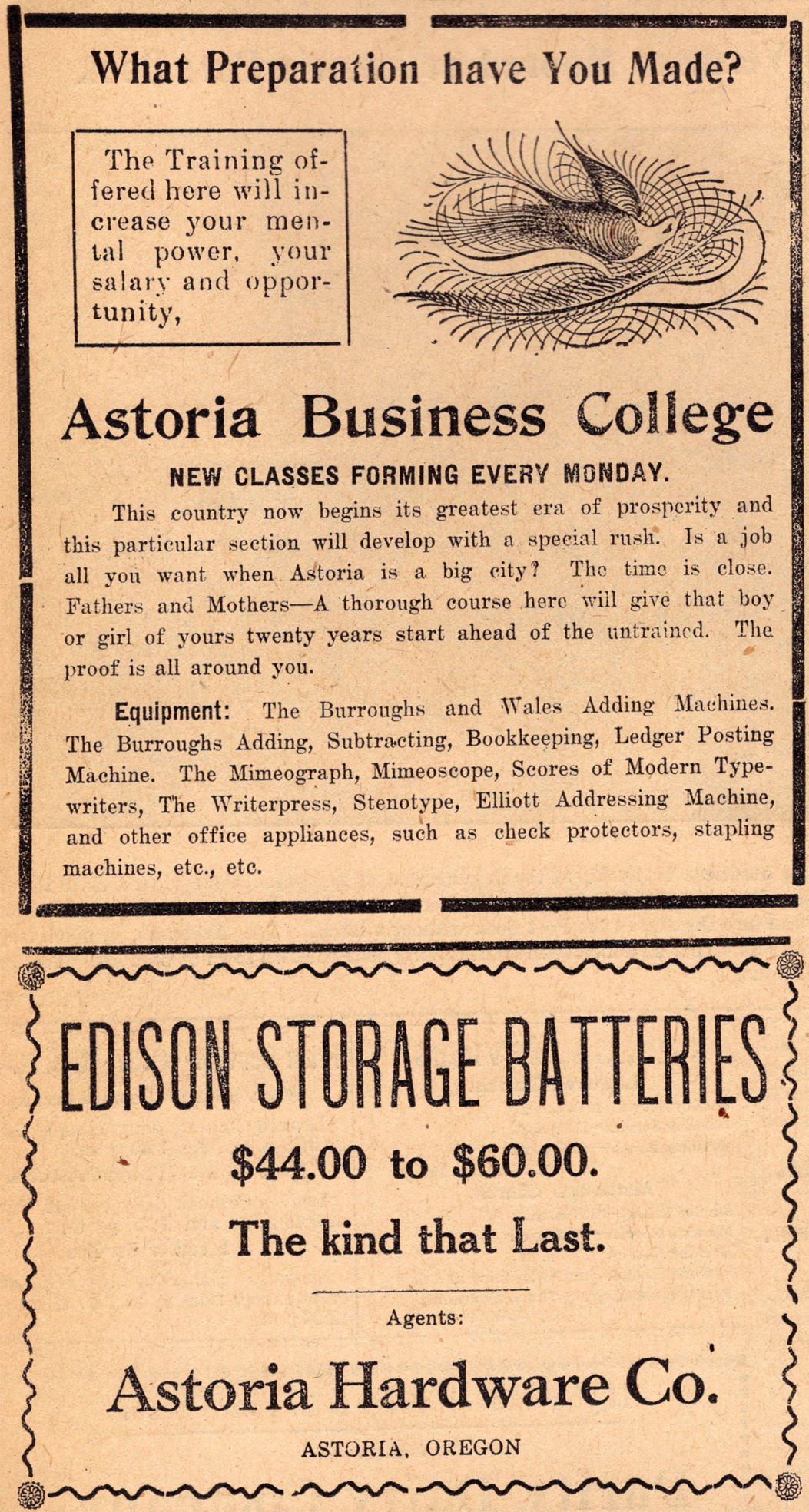 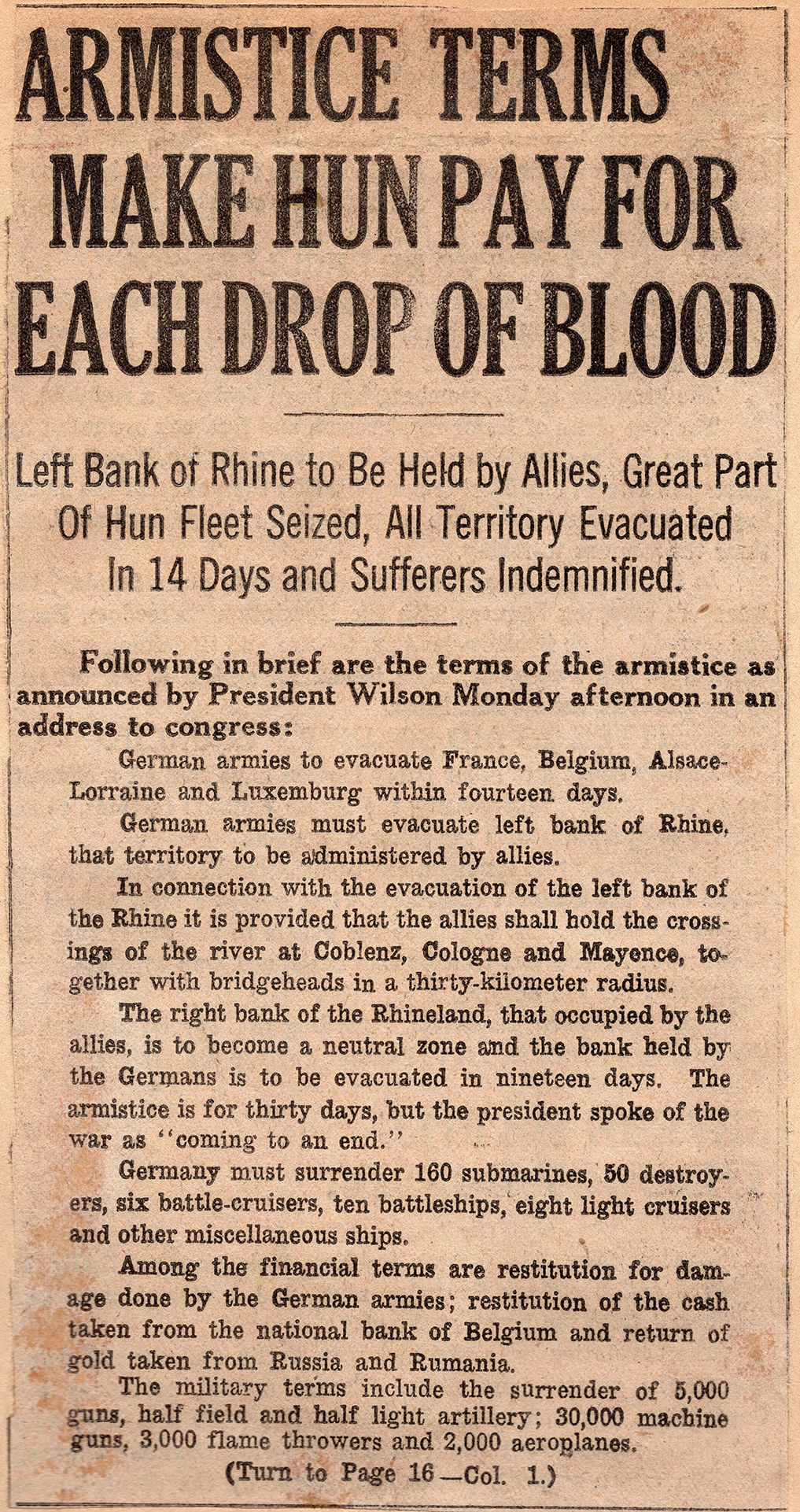 A 1918 news clipping in a family scrapbook reports the harsh reparations imposed on Germany. These led in part to the fierce backlash of World War II.

World War I helped lead to advances in roles for women and ushered in reforms including the right to vote.

An illustration from 1917 or 1918 portrays a female pilot with a bomb made to kill hated Huns, as Allied propaganda labeled all German enemies. It hints at the growing surge in female empowerment in the U.S. in the first decades of the 20th century.

A 1917 notice advised American men to register for the draft.

A patriotic postcard from World War I. Postmarked June 26, 1917, it was sent to Hilda Bell about a month and a half after the U.S. entered the war.

Herbert Hoover was appointed by President Woodrow Wilson to lead the nation’s Food Administration in World War I. His performance in that role was a factor in his later election to the presidency. This sugar certificate was issued to Jessie Alton, Matt Winters’ great-grandmother.

A poster pasted into a family scrapbook demonizes the German solddiers of World War I.

A Christmas postcard to my grandmother from a sweetheart at the front.

A 1918 news clipping in a family scrapbook reports the harsh reparations imposed on Germany. These led in part to the fierce backlash of World War II.

It may be what my grandmother Hilda Bell and her mom had in mind a century ago when they made a World War I scrapbook: capturing the mood of that explosive time for the benefit of an unknown grandchild.

Anyone who has ever set foot in an antique mall or junk store — the difference between the two is fuzzy — has probably wandered past dozens of scrapbooks. I’ve heard making them is still a hobby, but it seems they were most popular from perhaps 1880 to 1940, when inexpensive color printing produced billions of images and newspapers were at their pinnacle. Most of these amateur archives have long since gone into landfills, victims of mildew and indifference. I did the same last year, culling a few things from my mother-in-law’s odorous modeling scrapbooks and consigning the rest to oblivion.

However, my cousin Mary Silsby — an honorary aunt who shares my idolization of family artifacts — recently sent me a much more interesting 1917-19 scrapbook marking the start of the Great War through its immediate aftermath. Although its water-stained cover isn’t promising, its contents are immediately accessible to any of we few who can still channel my maternal grandmother’s uncommon strains of humor, rural romanticism and uncomplicated love of country. It is a precious peek into the mind of loved and constantly missed woman. I didn’t know her mother, who essentially died of poverty in 1932, but there are clues about her in its pages, too.

It opens with a full-page photo of President Woodrow Wilson with a doughboy clutching his carbine on the facing page. It closes with a photo of heroic wartime “food czar” Herbert Hoover. In between are pages of magazine and newspaper clippings, postcards from the front, ration coupons and government propaganda.

This is some of what caught my eye:

• Most touching to me are images of strong, idealized women playing active roles in the war: A female flying ace with her bomb, a soldier in the same uniform as the man beside her, a nurse at a soldier’s bedside. I see grandma in all these, never a bystander, always a model of strength.

• “Save fruit pits and nutshells of all kinds for gas masks” and “Save that shovelful of coal a day for Uncle Sam.”

• A Christmas postcard from a sweetheart to grandma: “Just had inspection of rifles, bunks and personal appearance. Thanks to say I passed fairly well. I wish I could be with you Xmas and hope you will get my bits of writing for Xmas: hope we will get plenty of writing paper now there is a Y.M.C.A. establishment here now. That is where I got this card. So Hilda write as soon as you get my letter. My love to you…” I don’t know who this was. Perhaps he died. She married my grandfather soon after the war, but always kept this note.

• With the maiden name Schreckengust and lots of German genes, great-grandma and her daughter seem to take pains to demonize those dastardly Huns: “Armistice terms make Hun pay for each drop of blood,” “Stamp out the Hun.”

Our scrapbook’s final pages brim with images of children hugging returning daddies and hints of normality. Looking back, we know that the 1920s were a prosperous time for many Americans, while at the same time the Ku Klux Klan ran rampant in the South and the Pacific Northwest. A deep economic depression struck parts of the farming sector — another of my great-grandmothers committed suicide after the family’s dryland wheat farm went bust in Montana.

Racist tropes evident throughout our old family scrapbook, directed at inhuman German Huns, may strike us as odd today. An enemy from 1917 to 1945, Germany — of which the Huns were one ancient ethnic group — has since World War II been among our closest allies. We ordinary Americans ought to always resist efforts by the powerful to paint entire nations as irredeemable villains. Sad to think that our thirst for vengeance against the Germans helped set the stage for Hitler and World War II.

Aside from always welcoming insights about departed loved ones, I’m also intrigued with glimpses in the old scrapbook of America’s lost times. Although the U.S. got off relatively lightly in World War I — 116,561 killed — it wrenched a generation out of complacency and sent them tumbling into an adventurous time of amazing change. As a song title of the time observed, “How Ya Gonna Keep ‘em Down on the Farm (After They’ve Seen Paree?)”

For a look at how our local area around the Columbia estuary began bouncing back from war, I turn as I often do to my newspaper’s old bound volumes. Our news to this day is largely invisible to outsiders, but Pacific and Clatsop counties have long benefited from robust journalism. (There is, incidentally, about to be an exception to our invisibility with the imminent publication of a major New York Times Magazine article about Immigration and Customs Enforcement’s local impacts.)

Here are some items and observations from the fall of 1919:

• Immigration was much on people’s minds — not Hispanic people but war brides and European fishermen. “A news item tells of 40 French brides of American soldiers setting sail from New York for their native land, leaving their husbands behind. … It is likely that many war weddings were based on nothing more serious than military glamour and that when this was gone and the young men had returned to civilian life the charm vanished.” In its 1919 session the “Oregon Legislature passed a law providing that fishing licenses can be issued only to citizens,” with a few narrow exceptions. Immigrants here were on the receiving end of this protectionist measure.

• “Gillnetters operating in the lower harbor [on the Astoria side] are making fairly good hauls of chums, but only a small number of silversides are being taken. As the chums bring five cents a pound, the returns to the fishermen are good.” Ten cents a pound was paid for silversides, or coho as they are now more commonly known. The Columbia River Compact, a treaty ratified by the U.S. Senate in 1915, was starting to be noticed by 1919, much to local chagrin: “That compact robs the states of Washington and Oregon of their individual sovereignty and places it in the hands of the Oregon Fish and Game Commission….”

• Editorializing “Cut us loose,” the Chinook Observer on Oct. 31, 1919 urged merging southern Pacific County with Wahkiakum County. “In the immediate future the southwest portion of Pacific County will have far less business and trade relations with the north end than it has now, which is merely nominal and limited to paying taxes … All the live wires of this end of the county are favorable to this change.”

• Luscious red cranberries of the Centennial and other varieties grown on the bogs of Clatsop County are in the local market and are also being shipped to other parts of the Northwest, reminding one of the approach of Thanksgiving day.”

• On Oct. 24, 1919 advocating a cross-river ferry service — Capt. Fritz Elfving acted on the suggestion in the summer of 1920 — the Observer said, “The lower Columbia river is now coming into its own. Astoria is developing and moving forward with prodigious strides in population, trade and wealth. It is bound to increase rapidly in the future. The lower Columbia river can now be distinctively called Astoria territory. … Let us all get together and pull for a Columbia river ferry.”

• “Notice: Fort Columbia, Wash., Oct. 20th. Owing to lack of funds for expense of operation, it will be necessary on and after Nov. 1st to charge 5 cents admission to the Moving Picture shows, to all persons not resident on the Military Reservation.”

• Logging remains a hazardous occupation, but it’s horrifying how routinely men lost their lives in our woods a century ago. An October 1919 example from Big Creek Logging Co.’s Knappa camp: Charles Fulton was instantly killed and his companion John Warner severely injured when “Suddenly the cable slipped, striking Fulton across the abdomen and cutting him nearly in two. He dropped to the ground dead. Warner was hit a glancing blow, his chest being crushed, his back injured and his forehead cut and bruised. … The dead man was about 40 years of age. … Tattooed on his breast were an upturned dagger and the word ‘Madagascar,’ indicating he was a native of that country.” He had no known relations around here.

All these nearly forgotten hard-working people of a century ago deserve to be folk heroes. We wouldn’t be here without them.

Matt Winters is editor of the Chinook Observer and Coast River Business Journal. He lives in Ilwaco.