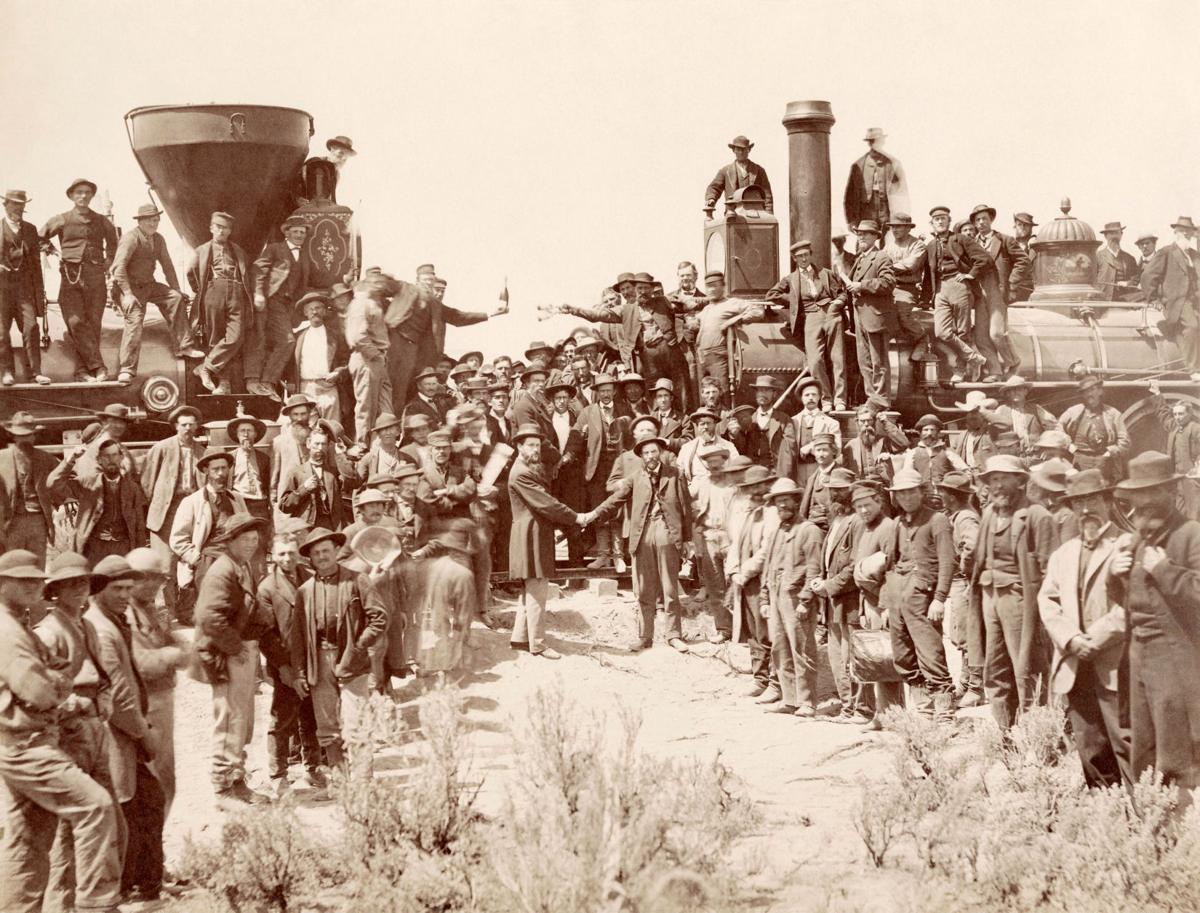 The golden spike was driven at Promontory Summit, Utah on May 10, 1869, formally marking completion of the first transcontinental railroad and the end of “Hell on Wheels.” 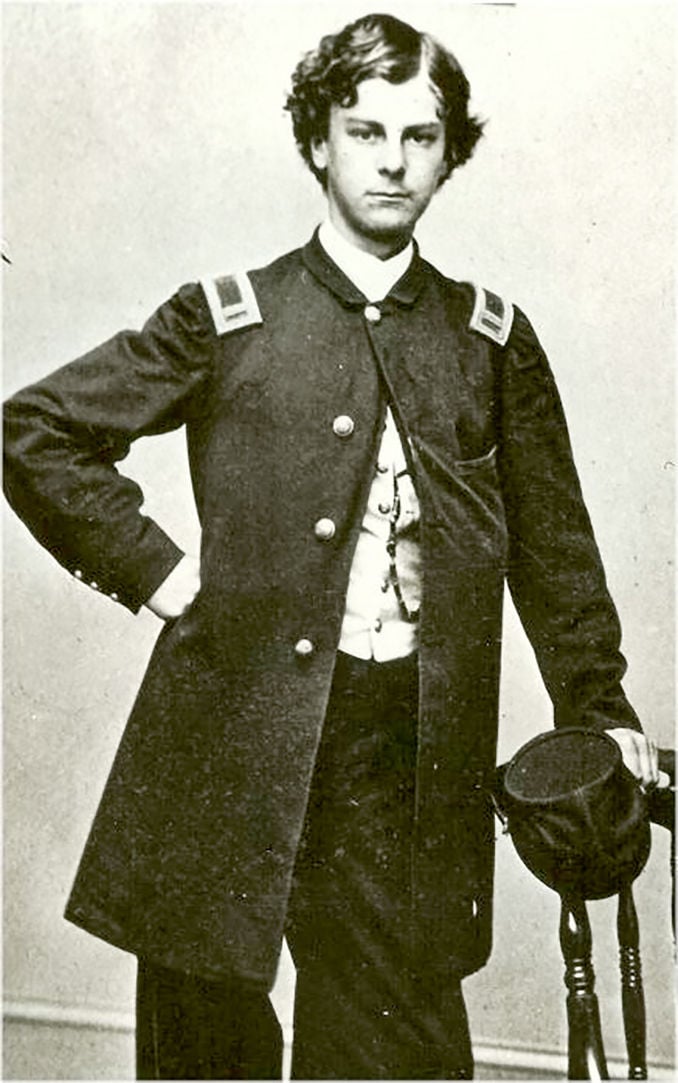 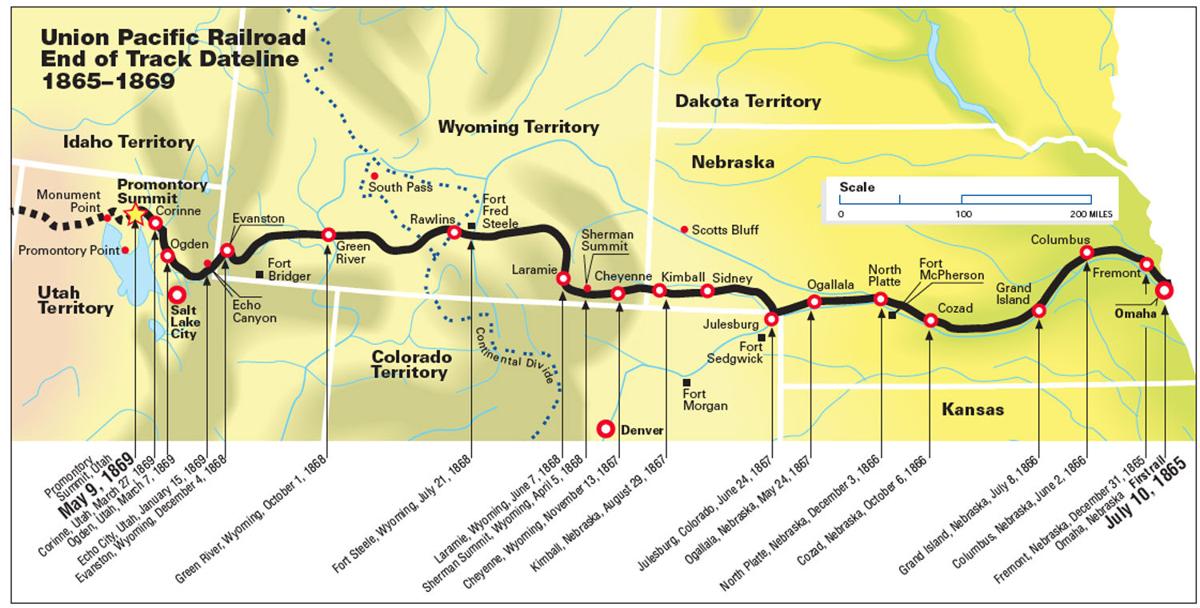 Ed Alton’s service policing transcontinental railroad boomtowns started when construction was approximately at Grand Island, Nebraska in 1866 and concluded at Promontory Point, Utah in May 1869. 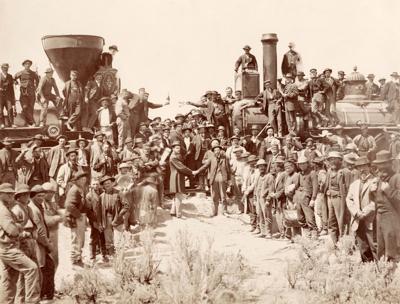 More than a colorful expression and title of a canceled TV show, “Hell on Wheels” was a momentous chapter in the lives of two of my ancestors and a paramount event in the history of the American West. It came to a close 150 years ago on May 10.

Construction of the first transcontinental railroad transformed the United States, stitching together east and west while making inevitable the rapid white colonization of the unsettled interior. Coming close behind the terrifying upheaval of the Civil War, the rail campaign was a blitzkrieg across the vast spaces of the American frontier, an ever-moving riot of labor, sweat, grime, crime, danger and change.

One of few Union soldiers to find continuing employment with the federal Army after the end of hostilities in 1865, Great-great-grandpa Edward Alton was staff sergeant for Capt. Arthur MacArthur’s Company I, 36th Infantry, assigned to guard railroad construction from 1866 in Nebraska to Utah in 1869. MacArthur, one of Civil War’s “boy colonels” promoted for bravery, eventually commanded American forces in the Philippines and fathered Gen. Douglas MacArthur. He was 21 at the start of Hell on Wheels. Alton was 29. They developed a close working relationship.

Peter Cozzens’ book “The Earth is Weeping” is about the Indian Wars. Among much else of interest, he wrote, “More often than not, company commanders gave their first sergeants a free hand.” In the West, company captains, regimental colonels and generals spent much of the post-Civil War decades feuding among themselves and with Army leaders in Washington, D.C., leaving day-to-day leadership to their non-commissioned officers: “Good NCOs were a godsend to officers.”

Across the wild West

“The General’s General,” by Kenneth Ray Young, gives this account of MacArthur’s and Alton’s first year in the West:

“As the Union Pacific crews moved west through Nebraska, they were protected by troops from the 36th Infantry to which Capt. MacArthur had been assigned. The ten companies of the regiment were spread thin along the railroad line. At the end of the tracks, troops lived in tents and moved almost monthly to new encampments or small towns along the route. Under the direction of its chief engineer, General Grenville M. Dodge, Union Pacific construction crews, composed largely of Civil War veterans and Irish immigrants, laid 568 miles of track that year [1866].”

“He was promoted at once [in February 1866] to first lieutenant and on July 28 to captain in the 36th Infantry. For the next seven years he was engaged in the onerous task of bringing the white man’s brand of law and order to the western frontier.

“And what a dazzling area it was — a lonely land of sun and silence. Not yet had the plow turned over the grass. Not yet had the land been spanned by ribbons of steel. Out there were still the horses, the cattle drive, the lonely rider on the mesa, the dust of the corral, the shone of saddle leather. Over the East and South still hung the smoke and bitterness left by civil war. But here, in the West, was a bright land of promise scarred only by the wind and weather — a land with unknown mountains to be climbed, alluring trails to be ridden, streams with strange names to be navigated by the strong and vigorous, a land of water holes, of dusty sagebrush, of sturdy pines.

“It was the Old West of frontier days, with its thrilling adventures, into which Captain MacArthur plunged. He knew the bad men … and the picturesque scouts and ‘lawmen,’ such as Wild Bill Hickok and Buffalo Bill. He manned guard over the advancing railhead of the Union Pacific Railroad. He was present when General Sheridan met with the Indian chiefs in an effort to stop hostilities.”

Bill Cody freighted and rode Pony Express out of Fort Kearny, Nebraska. Hickok pursued deserters and horse thieves between visits to the fort in the 1866-69 period. Alton and Hickok were friends until Bill’s murder in 1876. It was either at Fort Bridger, Wyoming or one of the shantytowns east of it where Ed Alton and his first wife Emma met and took in Martha Jane Canary. According to the November 1976 edition of Black Hills Nuggets, it was the Altons who first gave her the nickname Calamity Jane; she was also known as the “hellcat in red britches.” Jane later claimed to be Hickok’s true love, an assertion Alton and Hickok’s other friends found hilarious. She is said to be buried next to Hickok, with his friends claiming they planted her there as a practical joke on Bill in the afterlife.

During the Hell on Wheels years, Alton clearly served more as beat cop than as a soldier. There is nothing to show his company ever fought Indians — only law breakers.

“Eventually, hundreds of thousands of people followed the railroad lines west and built mining camps, cowtowns, and farming communities. Policing the myriad of new settlers, some of whom were ruffians and outlaws, was the prime job of the 36th Infantry, and companies were detached to the diverse communities that sprouted up near the railroad tracks. The infantry’s first task was to curtail the murder, mayhem, and violence that abounded on the frontier,” Young wrote in his MacArthur biography.

Although Young’s book is sketchy about the details of the 36th Infantry’s exploits during the “Hell of Wheels” era of railroad boomtowns, other sources paint a vivid picture.

Laramie and Cheyenne, Wyoming were legendarily rough boomtowns at the time Alton and MacArthur were tasked with policing them. See www.wyomingtalesandtrails.com/sherman3.html, which includes this first-hand account from the first rector of St. Mark’s Episcopal Church in Cheyenne, the Reverend Joseph W. Cook, who noted upon his arrival in 1868:

“The activity of the place is surprising, and the wickedness is unimaginable and appalling. This is a great center for gamblers of all shades, and roughs and troops of lewd women, and bullwhackers. Almost every other house is a drinking saloon, gambling house, restaurant or bawdy.”

A correspondent for the Chicago Tribune, Jim Chisholm, described Cheyenne:

“The wildest roughs from all parts of the country are congregated here, as one may see by glancing into numerous dance-houses and gambling hells — men who carry on the trade of robbery openly, and would not scruple to kill a man for ten dollars. This class is decidedly in the majority, and they have carried matters with a high hand for sometime past. Strangers are beset and robbed, and honest traders leaving the city with their mule teams are often waylaid and rendered penniless at a moment’s warning.”

“The first transcontinental railroad was finally completed when the Union Pacific and the Central Pacific tracks met on May 10, 1869, at Promontory Point near Ogden, Utah. … Captain MacArthur was there to see the driving of the final, golden spike,” Young wrote. No family recollection survives that our ancestor Ed Alton was present, but as MacArthur’s chief aide he may well have been. Job complete, Alton mustered out of the Army on June 3, 1869. MacArthur wrote of him “Faithful, true and diligent. As a man, and as a soldier, equaled by few & excelled by none.”

Emma Alton died in Piedmont, Wyoming on April 15, 1873, where she and Ed initially settled. On Oct. 30, 1873 Edward married Saria Neeley Andrews. Saria, my great-great-grandma, was born in Salt Lake City in 1851, the daughter of Mormon pioneers. Her mother was pregnant with her on the wagon train from Council Bluffs, Iowa to Utah. Saria’s story, too, is closely linked to the railroad. Her first husband — Charles Andrews Sr., a Union Pacific foreman — she divorced because of his violent drunkenness that became habitual during Hell on Wheels.

Saria’s story is one for another day, but one of our best family anecdotes about her is that she had a whorehouse burned down, and then found husbands for the women.

Urgent calls for Trump administration to help with COVID-19 supplies