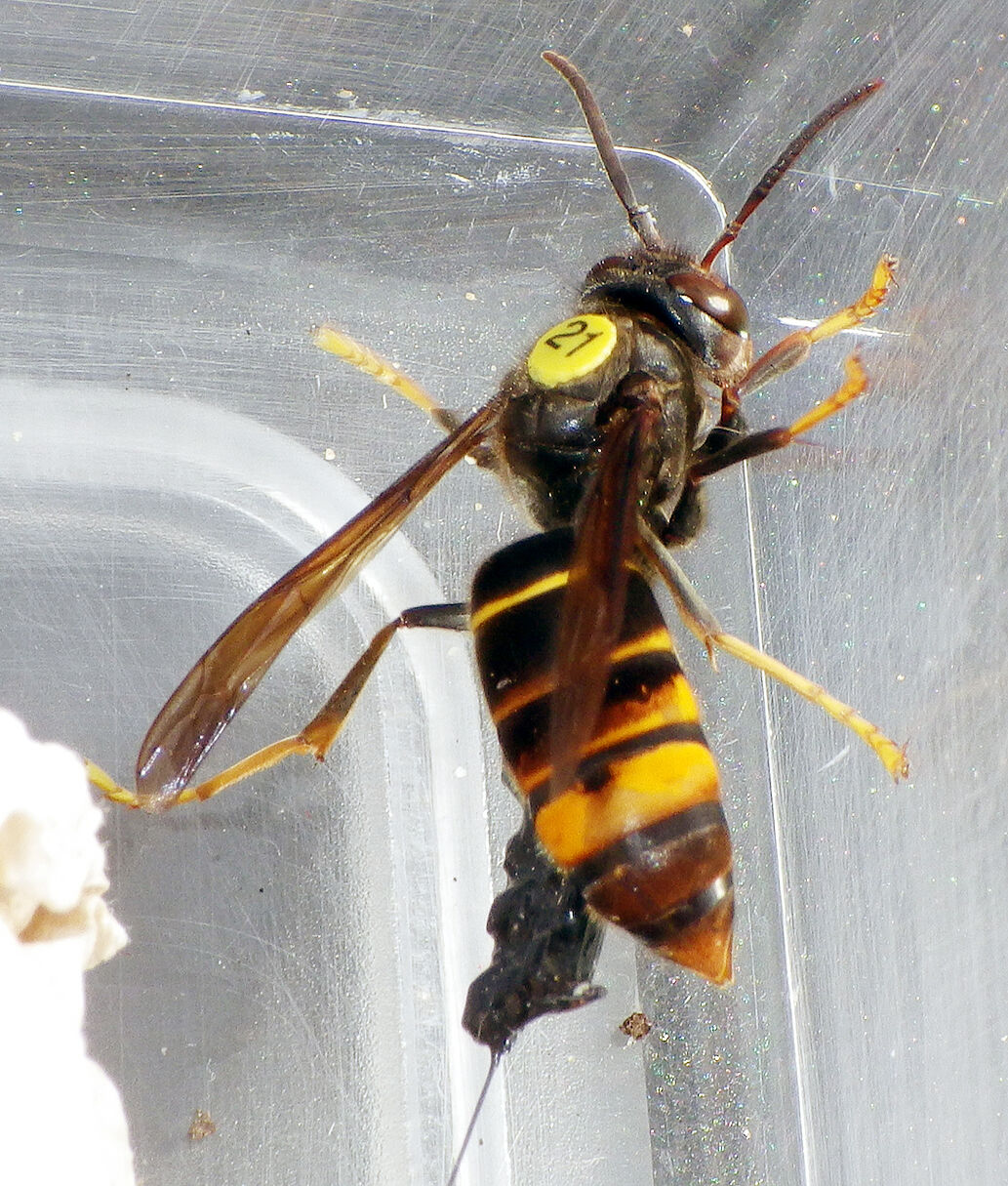 An Asian hornet tagged with VHF radio telemetry in the United Kingdom to track it to its nest. The Washington State Department of Agriculture may try the technology to search for and destroy the nests of the larger Asian giant hornet. 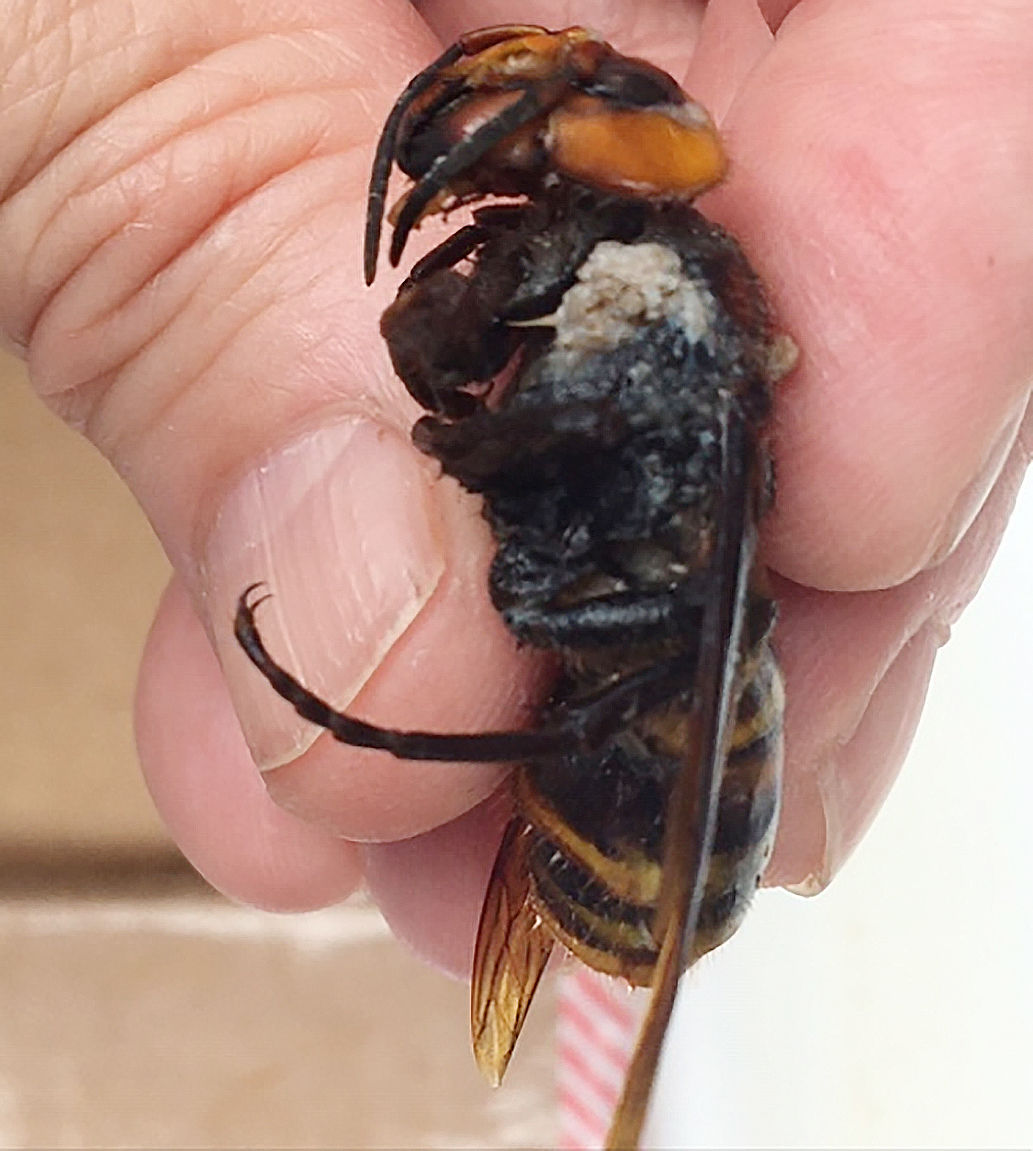 The Washington State Department of Agriculture is hanging about 600 traps in Whatcom County for the Asian giant hornet.

For several years, scientists have been strapping or gluing radio tags to a species of invasive hornets in France and the island of Jersey in the English Channel. Hornets have been tracked to their nests.

The same approach might be effective against Asian giant hornets, said the project’s lead scientist, Peter Kennedy, a behavioral ecologist at the University of Exeter.

“In theory, it should work,” he said in an interview.

The hornets tracked by Kennedy are known simply as Asian hornets (Vespa velutina). They are roughly half the size of Asian giant hornets (Vespa mandarinia). Both species, however, are a threat to pollinators.

A handful of Asian giant hornets has been found in northwest Washington state since late 2019, the first-ever U.S. detections. The Washington State Department of Agriculture has no tolerance for the intruders and will destroy any nest it finds.

Finding nests, however, will depend on capturing live hornets, marking them somehow, releasing them and following them home.

To track hornets, one or more embryonic technologies could be used, including tiny cameras, drones and the type of lightweight VHF radio-telemetry tags tested by Kennedy. Each tag, he said, costs almost $200.

“It’s on the table,” state agriculture department entomologist Chris Looney said. “It’s been shown to have value in Europe.”

Asian hornets were accidentally introduced into southern France in or before 2004. French beekeepers report losses similar to those suffered in the 1990s to Varroa destructor mites, according to research headed up by Kennedy.

The research found Asian hornets can fly with radio tags that are no more than 80% of their body weight.

“If anything, it may work better with an Asian giant hornet because, obviously, they’re bigger,” Kennedy said.

Looney said the Northwest’s lush landscape also might be an obstacle in tracking hornets. “One, we could lose the sight lines. Two, it might interfere with the signal,” he said.

Even if the tag makes it to the nest, other Asian giant hornets might destroy it. “The worst-case scenario is the hornet returns to the nest and somehow the tag is disabled,” Kennedy said.

Kennedy anesthetizes Asian hornets and ties on the radio tags with thread. “It takes a little bit of practice,” he said.

Looney said there will be a fine line between anesthetizing an Asian giant hornet with carbon dioxide and gassing it to death. “Knocking it out without killing it will take some experimentation,” he said.

The agriculture department and volunteers have hung thousands of traps baited with orange juice and rice wine. The hornets do not fare well in the traps, so finding a live one will be hard, Looney said.

“If we do find one, we are going to assume a reproducing population and we’ll bring everything to bear,” he said. “There is nothing we’re not considering because the situation is so new.”

OLYMPIA—As summer gets into full swing and people spend more time outside, state and federal officials and local beekeepers hope the public will keep their eyes open and report any sightings of Asian giant hornet.