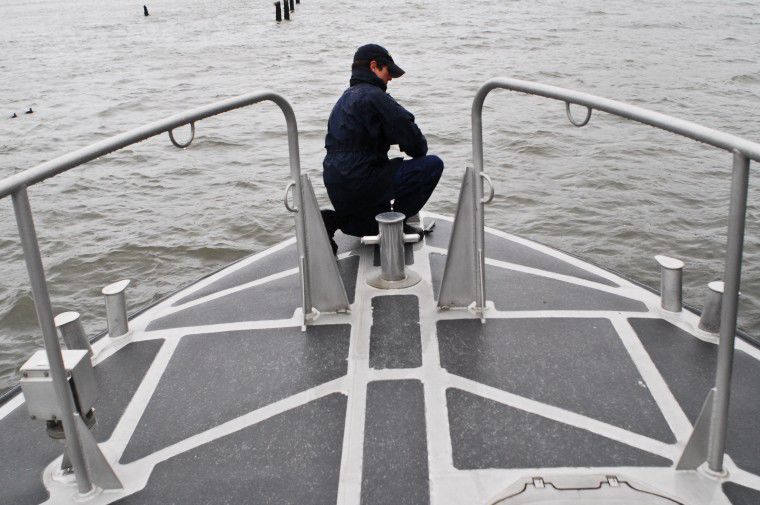 <p>After a returning boat docks following a training mission, one of the jobs that BM3 Lynn Kuchas undertakes is inspecting the various non-engineering components of the ship.</p> 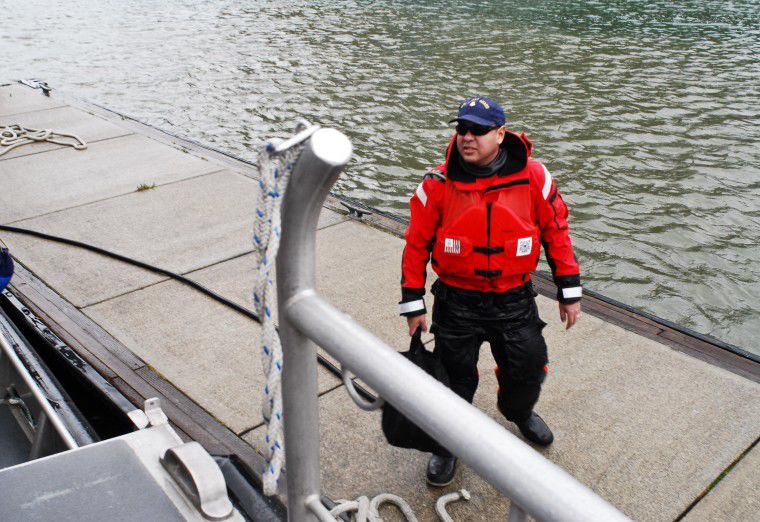 <p>Following a check of the engine room after docking, MK2 Robert Salinas returns to shore. Salinas was stationed on the Gulf Coast during both Hurricane Katrina and the BP oil spill.</p>

<p>After a returning boat docks following a training mission, one of the jobs that BM3 Lynn Kuchas undertakes is inspecting the various non-engineering components of the ship.</p>

<p>Following a check of the engine room after docking, MK2 Robert Salinas returns to shore. Salinas was stationed on the Gulf Coast during both Hurricane Katrina and the BP oil spill.</p>

The most exciting part of being at the National Motor Lifeboat School (NMLBS) is being able to go out on the water, BM3 Lynn C. Kuchas said about her duties at Cape Disappointment, the mouth of the Columbia River, and in the Pacific Ocean in the area dubbed Graveyard of the Pacific.

The amount of underway time we get here, especially in heavy weather and surf, is awesome.  The quality of training we receive is superb, Kuchas related. Above all, the people here are great to work with. They are happy and enjoy their jobs I think as much as I do mine.  The morale is extremely high which makes the school a great environment to work in.

Her duties at the NMLBS include being qualified as a tower watch stander and a crewmember on the 47-foot motor lifeboat.  She is currently working on becoming qualified to be a coxswain.

Kuchas lives in Astoria. During high school, a friend was trying to get into the Coast Guard Academy. It became my interest as well, and I started to work harder academically during my senior year and the first two years at UConn.  I really enjoyed UConn, so I decided to stay after receiving my associates degree, Kuchas explained.

I enjoyed the career I had before I joined the Coast Guard.  However, I needed stability and I did not want to work until I was 70 years old in order to be able to retire.  I also needed to continue having a career that was adventurous and enjoyable so for those reasons I have decided to stay with the Coast Guard, Kuchas said.

Kuchas was at Station Gloucester in Massachusetts as a seaman, she then became an HS3 at Air Station North Bend in Oregon, and now is a BM3 at the NMLBS near Ilwaco.

My biggest challenge has been being away from my family for long periods of time. I do have a sister who now lives in Washington so that helps, but I dont get back to Connecticut that often.

Kuchas finds the atmosphere in the area is laid back and the local people are quite friendly. Among Kuchas favorite hobbies are hiking and skiing.

MK2 Robert Salinas is a major contributor to the engineering department and is also involved with the parts inventory at the National Motor Lifeboat School at Cape Disappointment. Salinas is a veteran of the USCG having served at Station Pascagoula in Mississippi from 2004 to 2008.

We survived hurricane Katrina. That was a major ordeal, Salinas said. I then was transferred to CGC Saginaw in Mobile, Ala., until 2011, where I helped work on cleaning up the major BP oil spill that occurred while I was there. In 2011 I transferred to the National Motor Lifeboat School.

He said, I love the engineering department because they are a great group of guys and gals to work with. This is also a very beautiful area. The rain is taking a little to get used to, which is quite a change from Brownsville, Texas, where I grew up, but Im making the adjustment.

When told this was one of the driest winters on record, MK2 Salinas just rolled his eyes and flashed his friendly grin. He graduated from Homer Hanna High School in Brownsville, which is right on the border with Mexico. He is currently enrolled at the University of Oklahoma and is studying for a bachelors degree in natural science.

Salinas is married and has two children of school age. The couple is living in government quarters in Ilwaco.

I was thinking about joining the Navy and follow in my brothers footsteps, but he told me not to. He told me to look into the Coast Guard and I did and here I am, Salinas related.

I was recently married and didnt have a good job. I felt that I should be supporting my wife and family better so that is when I decided to join the Armed Forces.

Of the people of the Peninsula, Salinas said, They are very friendly. I am also amazed on how everyone is so used to the weather. It may be raining, freezing, or blowing 50 knots and people are going for a jog or walking their dogs.

When Salinas is not on duty you can often find him in his workshop. I started building furniture when I was younger. It is a great stress reliever and I am really tired of purchasing furniture that falls apart. I also love to play baseball with my oldest son, but thats only when the weather is nice.

BM3 Robert G. Hill IV graduated from Kamehameha Schools Kapalama Campus in Honolulu. I phone home nearly every day, but I love the surf drills here at Cape Disappointment. Any chance to get underway I take it, whether it is for search and rescue or for drills.

Hill, qualified as a boat crew member, is a deck-maintenance supervisor, and a communications watch stander at the age of 24. He lives in Long Beach and is single. I became interested in the Coast Guard when I would drive by the station in Maui. Many times the small response boats would be near a spot where Id surf in Maalaea Harbor, Hill explained.

I was laid off and needed a job when the Coast Guard offered me an opportunity. I was getting paid to be by the ocean, which is my second home and playground. Besides, I can help people and receive excellent benefits, including having my further education paid for, so it was a great deal for me, Hill said.

He was stationed at USCG Station Dependable in Cape May, N.J. before coming to Cape D. If I could change anything about Cape D is that it is cold all the time. I was born and raised on Maui so it was quite a shock for me the first winter, Hill stated.

I think Long Beach and Ilwaco are cute little towns and everyone is extremely friendly and hospitable. There is no big city hustle and bustle, no traffic, and everything is low key, which I like, Hill said. When Im off duty I like to relax, surf when the water isnt too cold or dangerous, and spend time with my friends.

When asked if he had been on any exciting rescue missions, Hill said with tongue in cheek, Well I dropped a can of Mountain Dew soda overboard once and I rescued it. Does that count? It does if you are Robert G. Hill IV.

Following boot camp, Seaman Emily Stoess first tour of duty in the Coast Guard is at Station Cape Disappointment. Stoess was trained to be a watch stander, boat crewmember and boarding team member. She graduated in 2006 from Henry Clay High School in Lexington, Ky.

I love going out on the boats and to go on training in the surf. When all the training we do pays off and we are able to help someone, it is a very rewarding experience for me. The weather here on the coast of Washington was a difficult adjustment for me to make, Stoess explained.

The long hours and sleep deprivation during the summer months when the station is the busiest were also challenges I have had to deal with successfully, the soft-spoken, but resolute Stoess related.

I love to go to the beach and relax or go hiking in this area. Road trips to Portland are always fun, too. This is a very friendly community, Stoess concluded.