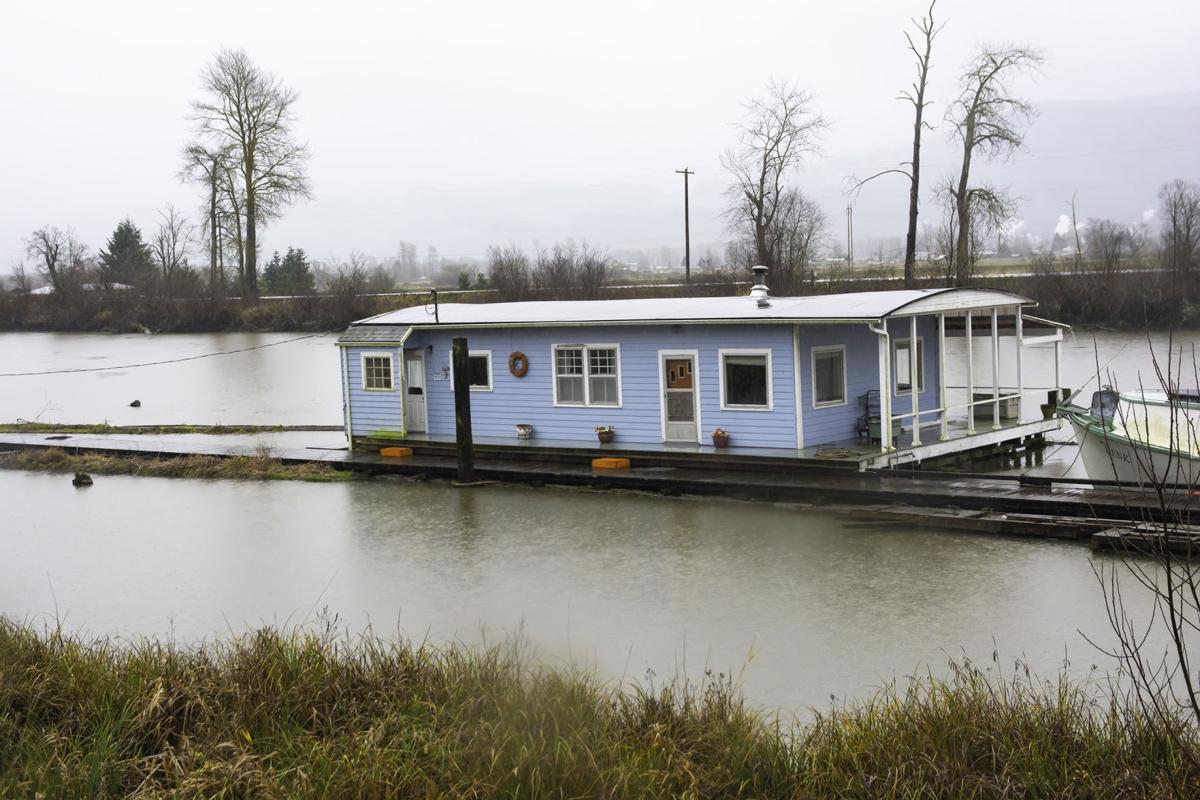 A blue houseboat on a local slough demonstrates that living on the water need not be fancy. 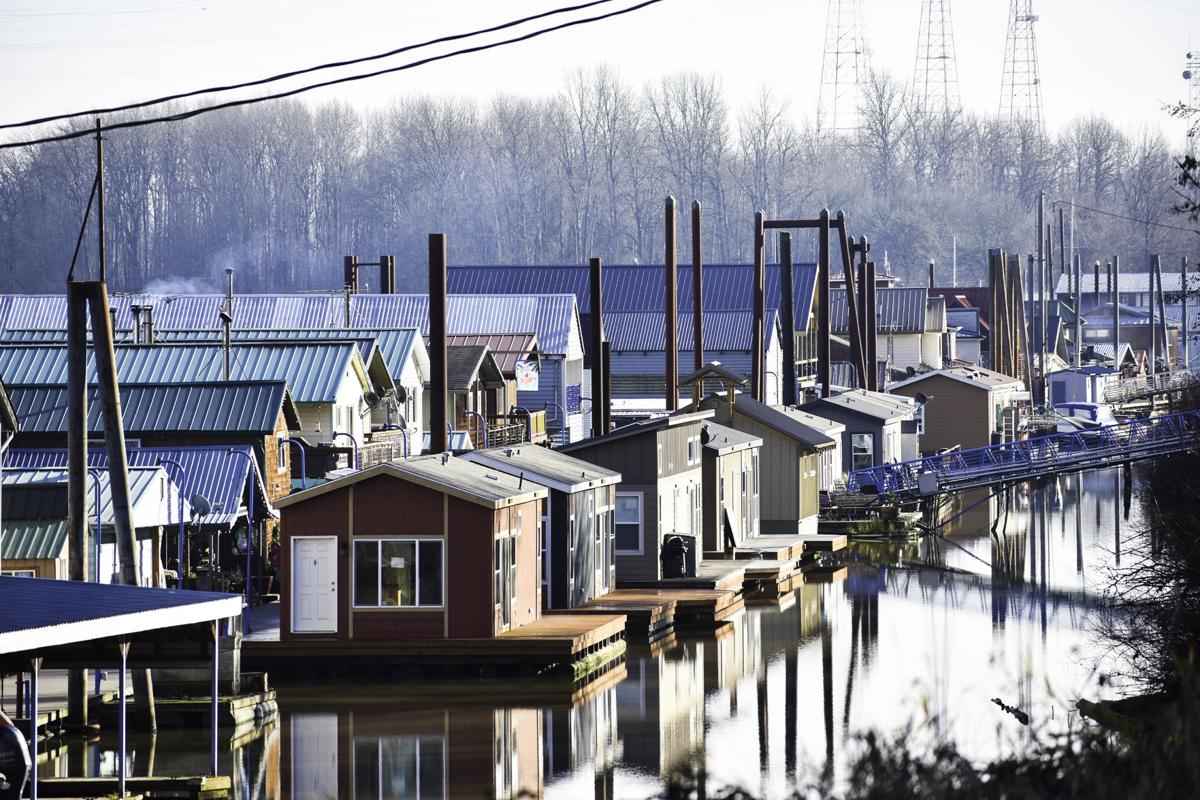 A local waterway is lined with float homes. The John Day River east of Astoria has a concentration of these unique living spaces, as does North River in Pacific County. 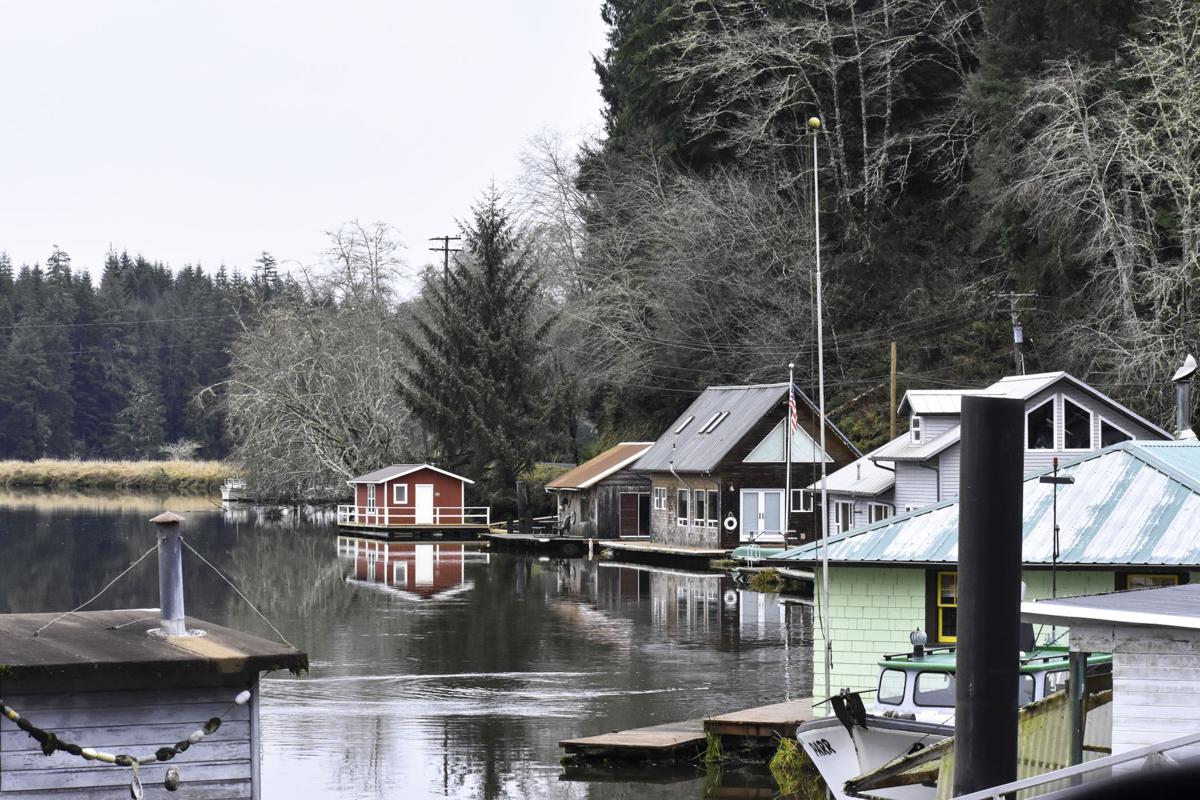 Houseboats dot the east bank of the John Day River in Clatsop County. 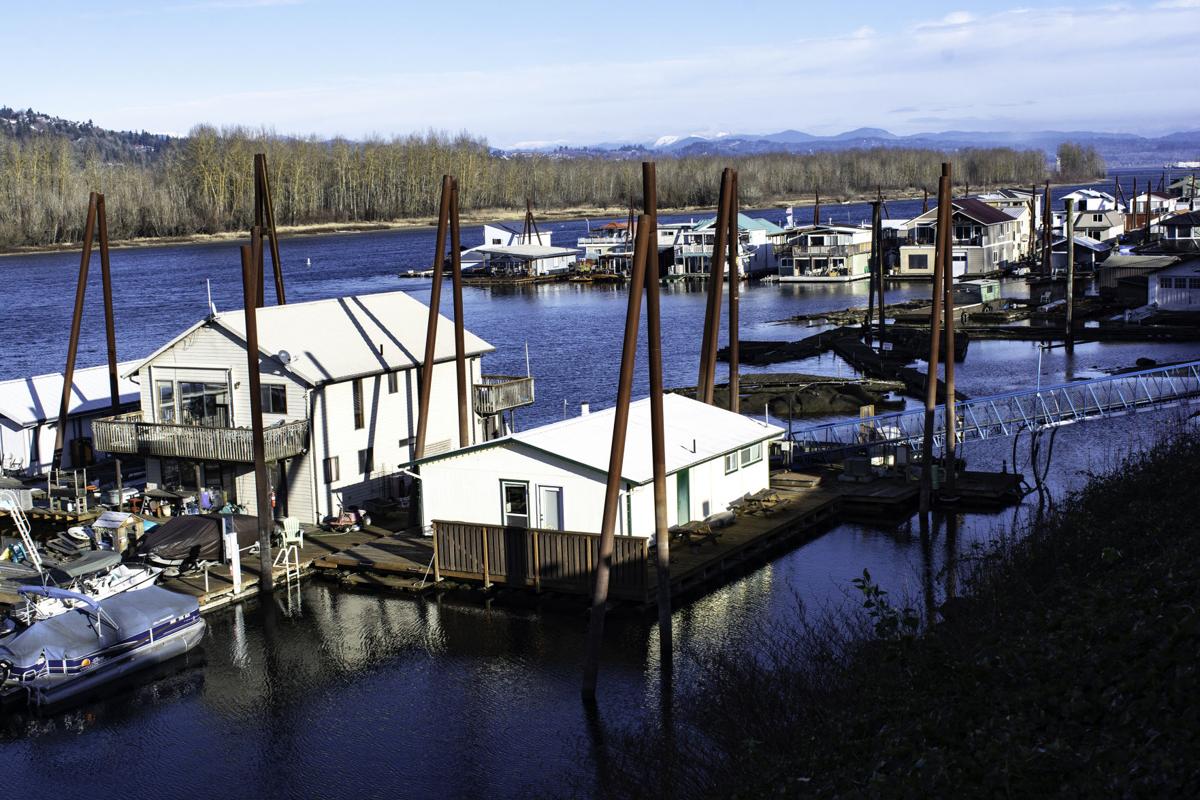 Houseboats in Portland are a big deal in Portland, but also sources of controversy and friction between vessel owners and the state. 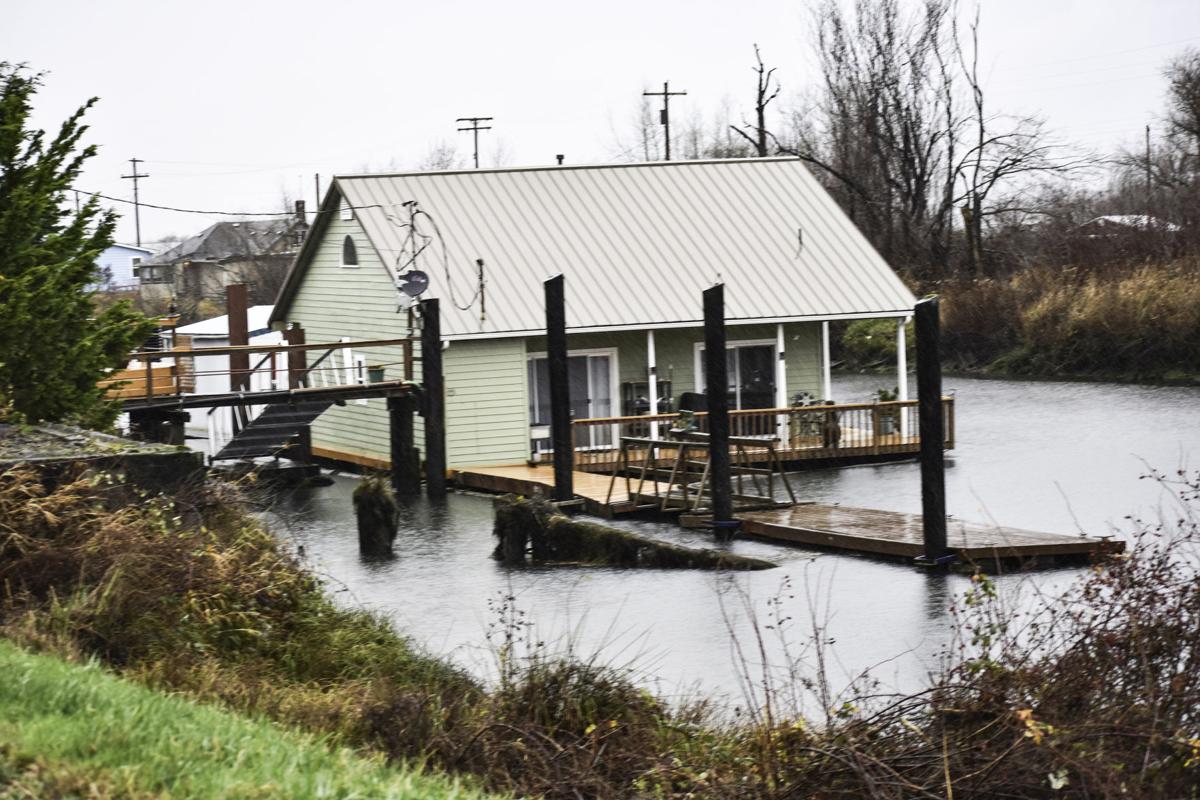 A cozy houseboat offers rich connections with the surrounding environment.

A blue houseboat on a local slough demonstrates that living on the water need not be fancy.

A local waterway is lined with float homes. The John Day River east of Astoria has a concentration of these unique living spaces, as does North River in Pacific County.

Houseboats dot the east bank of the John Day River in Clatsop County.

Houseboats in Portland are a big deal in Portland, but also sources of controversy and friction between vessel owners and the state.

A cozy houseboat offers rich connections with the surrounding environment.

It has long been the dream of many Northwesterners to live a simple life on the water. A houseboat on the Columbia River, or perhaps a liveaboard sailboat on one of its tributaries. Cruising about in the summer months, then overwintering in a snug harbor.

Or maybe, living year-round in a house built on a log raft, rising and falling twice a day in rhythm with the cosmos and Mother Nature at your door. And, like all dreams, these scenarios may or may not be what each seems.

The urge to live on the water is as old as the first boat. A floating home can be as small as a pickup truck or as big as the Thalamegos, a houseboat built by Egyptian pharaoh Ptolemy IV Philopator. His three-story palace on a catamaran measured 377 inches long by 66 feet wide.

The ship was decorated with 60 inch marble colonnades embellished with plenty of gold, jewels and ivory. The ship, which sported 1,200 oarsmen, was symbolic of power from the god Dionysus to the human (Greek) royal line.

Although houseboats sold in Washington state last year for upwards of $6 million, and billionaire yachts are valued in the tens of millions, most houseboats are substantially less grand than these modern day pharaohs. Besides, where are you going to find 1,200 oarsmen?

Water habitation came to the Northwest with humankind. When Europeans came, native peoples were already living on the water. Liveaboard was the standard until defendable settlements were established.

Soon, the Columbia and other river system shorelines were dotted with river homes along every sheltered slough and channel. Often the people who lived on the river made their living near the river. Gillnetters, log rafters and boommen, tug and barge operators, fur tradesmen, horse seiners and marine construction workers made up a large segment of the water-bound population.

Houseboats, float houses, boathouses and boats large enough to live on have been a feature of life on the Columbia since those early days, but changes in the patterns have been executed due to public pressure, leading to environmental and zoning regulations.

Both Oregon and Washington state own all the land (with limited exceptions) under all navigable waters, and so are charged by each state’s governments with managing the lands and waters above for citizens’ well-being. Both states must also abide by federal regulations such as shoreline management plans.

Both states lease lands for moorage and have extensive regulations governing those leases. Though there are places where waterborne residences can only be reached by water, those are rare, so inevitably they must be tied to land that is not part of the lease and anchored with pilings and gangways to access the homes.

Neither state currently issues new leases for floating homes outside established marinas. Federal, state, county and municipal agencies have regulations regarding floating homes that include location, sanitation, zoning and building issues. Boathouses are considered water-dependent structures and are governed by different rules.

In 2018, the Oregon Department of State Lands managed 2.6 million acres with 4,854 active leases, according to Ali Ryan Hansen, the department’s communications manager. The land generated just over $3.1 million in revenue. Not all of these properties were floating homes. Despite the demand for floating homes remaining strong, there’s only been a small change in floating home leases.

Living aboard a boat/yacht/tug/schooner is a life not cut out for many, but for some there is no other way to live. It’s a dreamer’s life for sure, since it is never as easy or romantic as it has been portrayed. Mariners in Northwest waters are guaranteed use of navigable waters for water-dependent uses but the duration of those uses is not unlimited.

If a vessel owner intends to moor their craft for more than 14 days over state lands, they must secure a permit and follow the lease process or secure moorage in an established marina. There has been much debate between government land managers and shoreline property owners about “free boating.”

“Our marinas currently have a moratorium on new liveaboards” said Jane Sweet, harbormaster for the City of Warrenton. “Warrenton’s marinas were designed for servicing the commercial and sport fleets, not as living facilities.”

The infrastructure costs for providing service support to these vessels has risen and the cost of liability is also high. That being said, commercial marinas still depend on liveaboards as a main source of income. Both commercial and municipal marinas still have some longtime liveaboard tenants, but the number is decreasing.

Another aspect of marina managers’ reluctance to grant new liveaboard arrangements is the growing problem of derelict vessels. While boats are large enough to live on for ages, their costs are expensive to maintain. Hauling charges and transportation costs only add to hard-to-manage fees.

Some owners give up, leaving an unsellable potential floating hazard for the marina to manage. The boat can easily become a ghost ship, morphing from someone’s dream to someone else’s nightmare. Nearly all marinas are unequipped to do vessel deconstruction, leaving the abandoned ships to go away slowly.

In view of this situation, the Port of Ilwaco has embarked on a plan to create a vessel deconstruction facility on port-owned property. A development grant has been secured and a call was made for bids in late 2019. This project will be designed to safely and ecologically deconstruct vessels and transport the hazardous wastes to proper disposal facilities. Plans are to accept boats from all parts of the region.

“All the bids we received were quite a bit higher than we had planned, so we are revising the plans and seeking other funding to complete the project,” said Ilwaco Port Manager Guy Glenn Jr.

It is heartening to learn that these and other plans are in place to help provide for a future generation to enjoy river living here on the Columbia. River life has a rich and varied history and culture in the Northwest and deserves preserving along with other things that help make us who we are.

Ron Baldwin is a musician, photographer and writer living in Chinook, Washington.

Boathouse — A structure intended to house a boat. Normally never moved or moved with great difficulty.

Houseboat — A vessel with a house-like structure designed to be moved occasionally or often. Built on a barge or scow hull, many are self-powered.

Floathouse — A house built on a log raft. Not intended to be moved but anchored in place. Moveable with great effort and expense.

Floating home — A house built on floats, anchored in place and never moved.

Liveaboard — A boat big enough to be used as a home. Usually moored in a marina or other anchorage. Used for pleasure cruising.

Doctor on Covid-19: There is a propensity for blood clotting

Gupta on CDC director statement: You've got to be kidding me