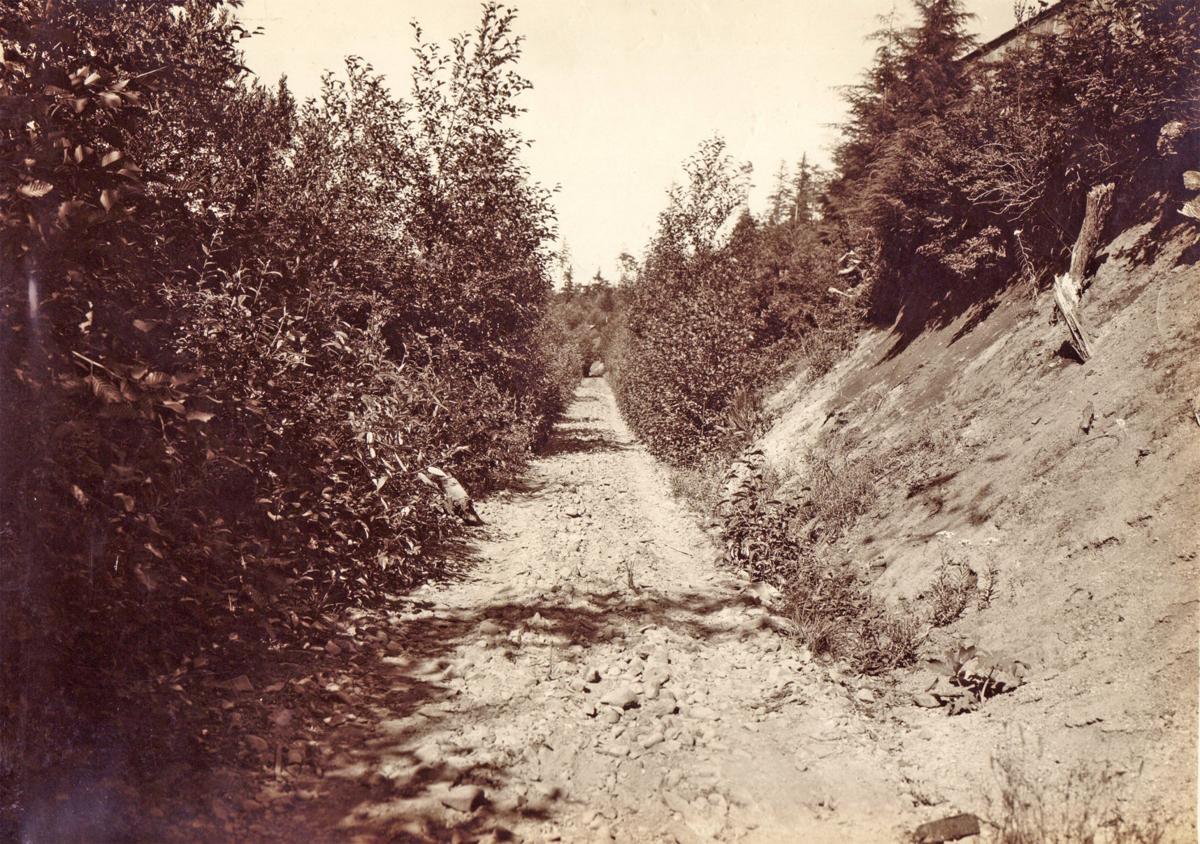 This was one of the first attempts at a road over KM Mountain in Wahkiakum County. Roads like this were only passable in the summer months. 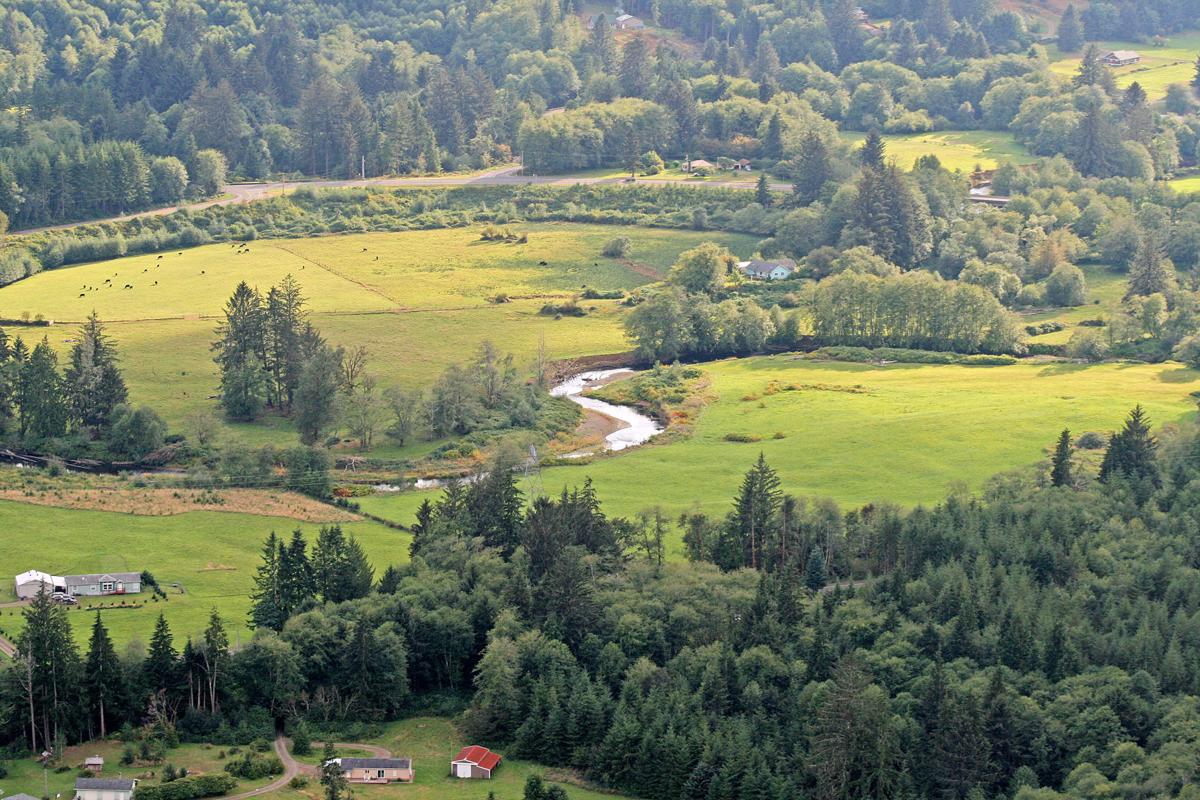 Washington State Route 4 travels along the Naselle River near the community of Naselle. 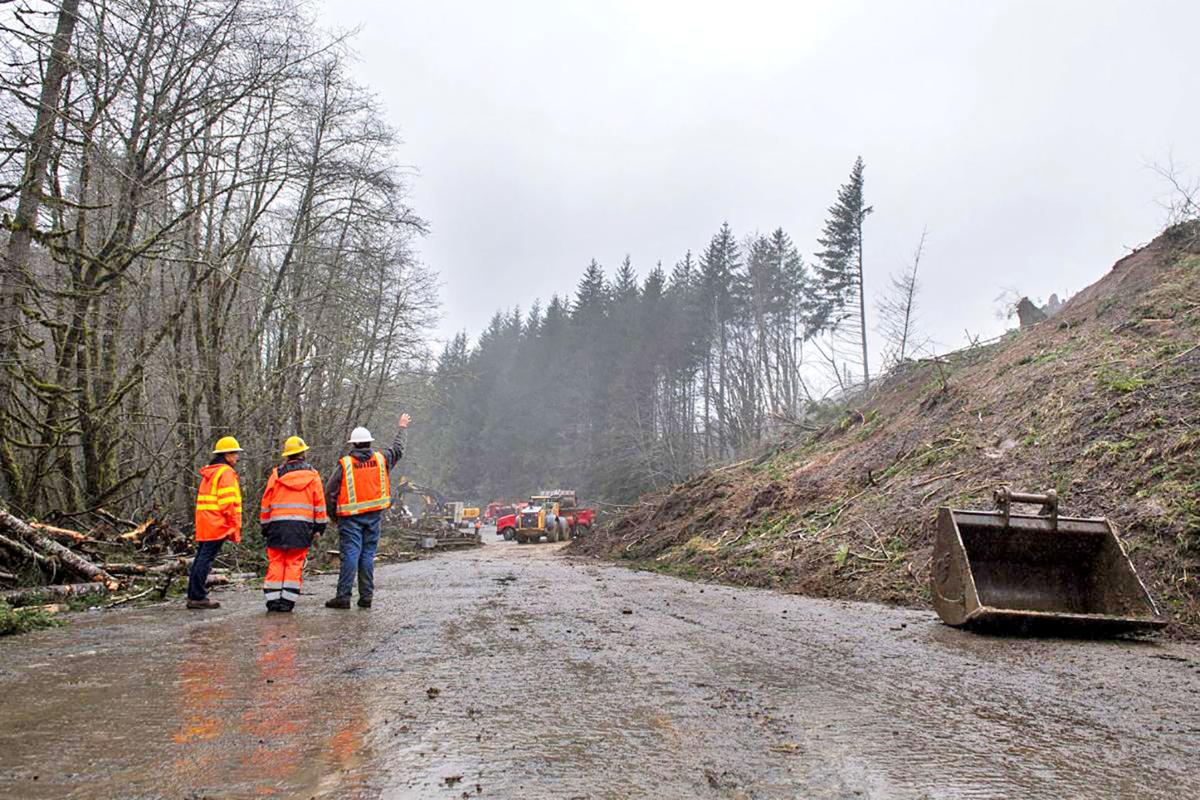 Washington State Department of Transportation employees and contractors survey the aftermath of a landslide on State Route 4 west of Cathlamet on Feb. 5. One lane of the highway was subsequently reopened.

A plank footbridge across the Grays River near the Meserve store in Western Wahkiakum County is an example of early local transportation infrastructure. 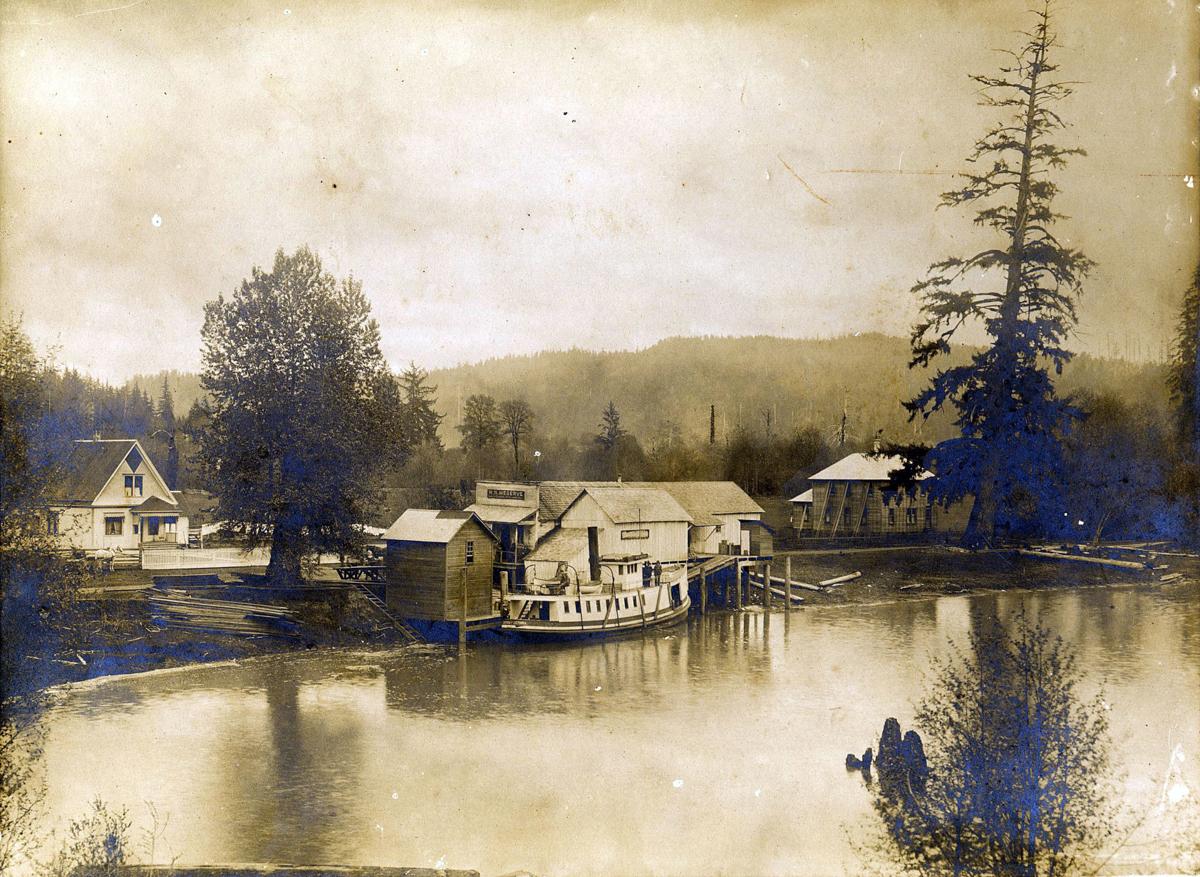 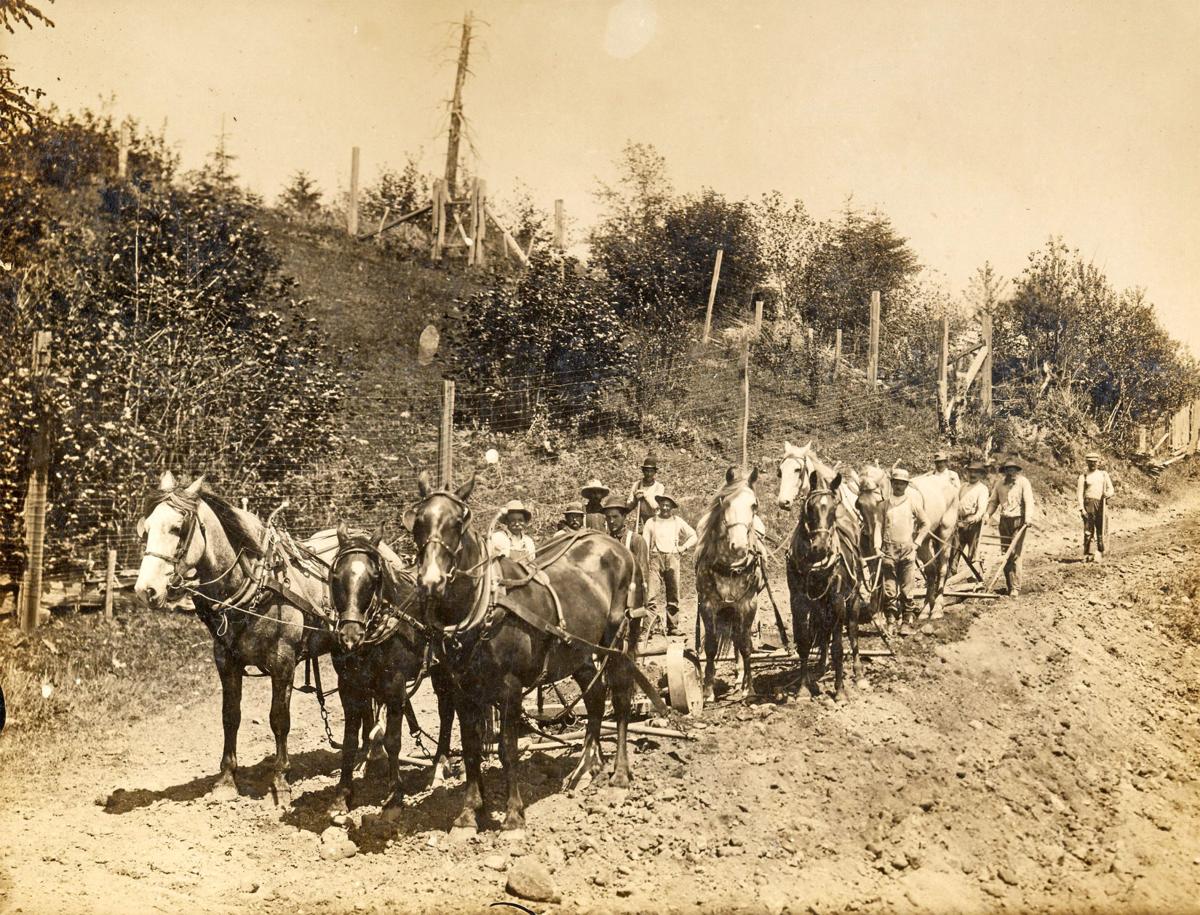 Norwegian immigrant Ole Dosland and his crew were local contractors using horsepower to carve what would become State Route 4 through farmland and forest. 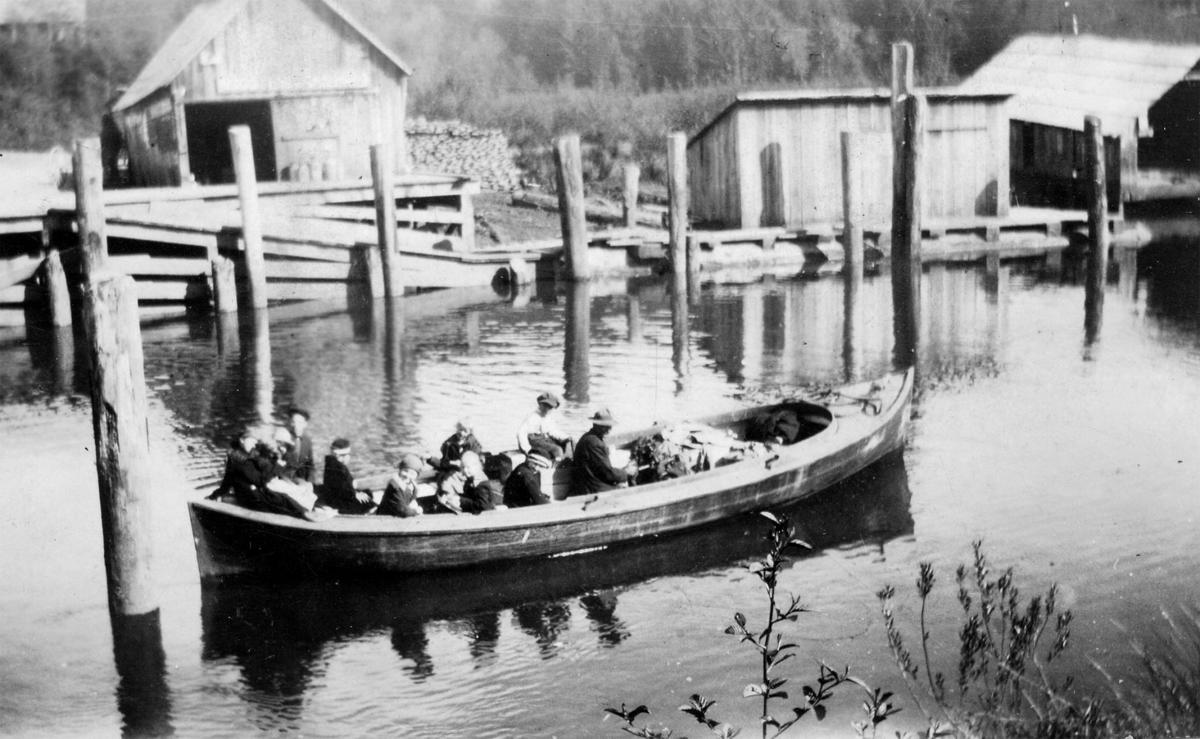 The water route was how school children got to school before all weather roads were established. Here, Mr. Sundberg transports school children on the Deep River in Western Wahkiakum County. 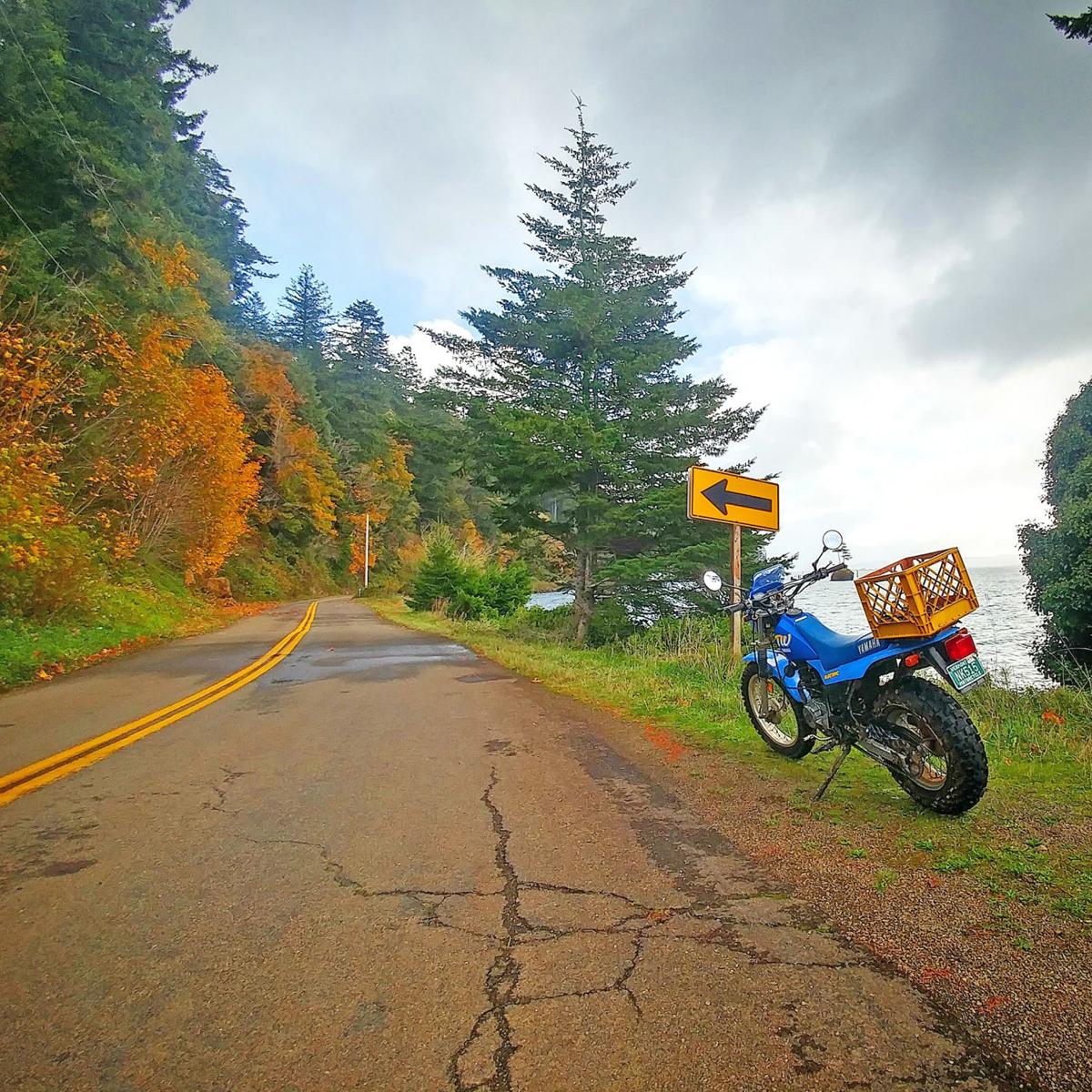 Altoona-Pillar Rock Road runs along the Columbia between Rosburg and a dead end at the privately owned Pillar Rock cannery. This might have been the Ocean Beach Highway route, but it is little traveled since State Route 4 was cut over KM Mountain instead of following the river.

Surveyors work on a wood bridge somewhere between Knappton and Naselle, circa 1900.

You can get lost in early Southwest Washington settlement history at the Appelo Archives and Museum in Naselle, which is open from 9 a.m. to 2 p.m. Wednesday through Saturday. A book store and cafe help support their efforts to collect and share local history. You can't miss it, it is right on State Route 4 on the east side of Naselle. https://www.appeloarchives.org/

I rode my motorcycle around Grays River Valley in the days after January’s wild storms died down.

Sandbars of brown silt still formed temporary speed bumps on local roads. Guardrails were dented and mangled where trees had fallen across; now cleared away.

One such tree came down across State Route 4 just a few feet away from the house built by Ole Dosland — a Norwegian immigrant who got a contract to use his team of horses to grade the road that would cut right through his farm.

Clouds clung to the treetops along the steep slopes of the Willapa Hills. Green pastures on either side of the Grays River were still covered by trapped floodwater waiting to either drain down into saturated soils or evaporate into saturated air.

A quarter mile from my house, a sign warned of a road closure on KM Mountain. A slide of rain-saturated earth liquefied and oozed across the road Jan. 23, taking dozens of trees with it.

The slide was so large — 55,000 cubic yards of earth and rock — stretching so far up the steep hill, that it was quickly determined that the cleanup would stretch weeks and months. Thus a major transportation route toward the outside world was cut off.

The age of water transportation

So tenuous are our roads this close to the end of the world that we shouldn’t take them for granted.

Highways are latecomers in this part of Southwest Washington. Roads don’t really belong here in the rain forest — the fact that they exist is a mark of human tenacity.

Rivers and creeks and bays — all were obvious natural highways predating European settlement. These routes were well established and understood by the Chinook-speaking people of the region — sophisticated traders who used the coastal waterways and Columbia River as economic arteries to barter with inland nations and others north and south along the coast. Early settlers watched the native people navigate the rivers to maximum effect.

For the first 100 years of European settlement, the transportation pathways of choice were our many rivers, used to transport goods and people inland from the larger world. Steamers ran regular routes connecting farm communities via riverside landings. Railroads cut deep into woods to haul out logs, transporting them only far enough to dump them into rivers, where they were floated out to sawmills.

Milk from early 20th century dairies was often taken by skiff to the local creamery. The “school bus” was a boat that delivered students to the steps up the riverbank before the bell rang.

Victorian tourists traveled down the Columbia from Portland to their Seaview beach houses, meeting up with the “Clamshell Railroad” that “ran by the tides” from docks in Megler and Ilwaco.

Inspired by these patterns of waterborne commerce, boosters eventually conceived of a canal to connect the Puget Sound to the Columbia River — a wild infrastructure dream that started in the 1860s and kicked around for 100 years: https://www.historylink.org/File/9685.

Eventually, cranberry and oyster growers in Pacific and Grays Harbor counties put an end to the talk. Cranberry growers feared losing the high water tables needed to produce their crops while the oyster growers knew the freshwater pouring into bays would lessen salinity and ruin their industry. Fishermen worried about losing spawning grounds.

Even so, the canal dream persisted until 1977 when lawmakers consolidated the state canal commission with other agencies into the Department of Transportation.

These days the Department of Transportation is still busy working to clean up that massive slide on KM — restoring uninterrupted travel on State Route 4 while trying to repair other storm damage up and down the coast.

We tend to think of these vital roadways as ever-present — we take them for granted as making a living increasingly depends on commuting to jobs miles away from home.

However, State Route 4 is fairly new, and if you think creating a massive canal between Seattle and the Columbia River sounds farfetched, that idea becomes even more laughable when you realize how difficult it was just to cut a two-lane road through the forest from Longview to Long Beach.

In the decades around the turn of the 20th century, regular steamship service on the Columbia’s smaller tributaries linked the little farm and fishing communities growing up in valleys still mostly separated by the steep, rain-soaked and forested Willapa Hills.

In those days, it was easier to go by steamers from Deep River to Astoria than to travel the four miles as the crow flies over to Grays River. As the communities thrived with new settlers, demand for roads to connect these communities grew.

Bridges — first of wood and later of steel and concrete — forded rivers and plank roads crossed marshy, shifting soils. The ingenuity acquired by logging operations erecting railroad trestles deep into the forest was applied to grading and bridging the “Hungry Highway” from Naselle to Knappton, as well as other gravel roads that — at their best — were still seasonal and unreliable.

KM Mountain vs. a riverside route

As local roads were puzzle-pieced together through the woods and along the Columbia River, a route over KM Mountain was the missing link connecting the coast to the booming planned city of Longview.

The original State Route 19 wasn’t connected from Longview to Long Beach until 1933 and wasn’t fully paved all the way until 1939, partly thanks to economic-stimulus efforts during the Great Depression.

Westbound State Route 4 hugs the Columbia until it cuts inland at Skamokawa, choosing to climb up over KM rather than continue along the shoreline. Why this route was chosen dates back to early Grays River entrepreneur William Meserve.

To say Meserve had a store in Grays River is a bit of an understatement. Built in 1890s to serve the river traffic on the Grays, Meserve’s complex included a theater, bowling alley, barbershop and post office. Daily steamship traffic brought goods to the store and hauled away products from surrounding farms.

Meserve was a state lawmaker by the time the route for the highway was proposed. Early surveys planned to follow the Columbia between Skamokawa and Megler — the shortest route — leaving the farms of the Grays River Valley isolated. As a state senator, Meserve lobbied for a route that would take it inland through the valley past his farm and his store, continuing through to Deep River and Naselle.

While Olympia politicians tussled between a river route and KM route, early motorists took matters into their own hands with a caravan over KM. Led by Longview resident Gus Hafenbrack, the August 1924 expedition required paricipants to put their cars on a logging railroad car to get across KM. The next year, the logging company had pulled up the rails and a second expedition had to drive their cars on rail-tie trestles over 200-foot canyons with no guardrails.

Yet each summer the journey between Longview and Long Beach got a little easier. State contracts and money started flowing. Plank roads gave way to graded rock. Ferries were replaced by swing bridges and finally arching concrete spans built high enough to allow commercial river traffic to pass underneath.

The story of State Route 4 isn’t of a single road, nor is it a single story. It is a hundred little roads, surveyed and abandoned, cut through forests by ambitious local volunteers and Depression-era public-works crews. It was built and moved and built again.

It is still being built and rebuilt to this day. All the roads in this temperate rain forest suffer winter’s rage of a thousand cuts.

Frequent rock slides east of Cathlamet pound the pavement into a pockmarked shambles each winter. Slides force commuters back to the ferries or through detours deep in the woods. This same battle rages every winter, with state and county road crews fighting skirmishes with every soil-saturating Pineapple Express and tree-toppling windstorm.

Our winter storms can be brutal, and the highways and bridges that we take for granted suffer as a result. It’s easy for us to become impatient, and to second guess the heroic efforts sometimes required to keep the way open.

Floods and slides and broken roads are just a price we must pay to live where the rivers meet steep-sloped rain forest along an often un-Pacific ocean.

On a summer day — or even a sunny day in February — it’s easy to forget what it takes to make a road in the forest.

Author’s note: photos and research for this essay are thanks to the amazing Appelo Archives in Naselle, where you can find a wealth of amazing photos and history about our region.