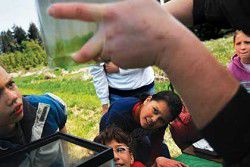 <I>Photo by DAMIAN MULINIX</i><BR>Fourth-graders from the Star of the Sea School try to better their vantage point while examining the bottom of a starfish in a glass bowl held by the Willapa Refuge's Kristine Weisbrod. 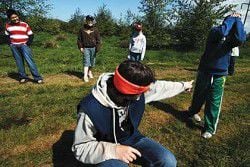 <I>Photo by DAMIAN MULINIX</i><BR>Fourth-graders from the Star of the Sea School try to better their vantage point while examining the bottom of a starfish in a glass bowl held by the Willapa Refuge's Kristine Weisbrod.

LONG BEACH - "Can you imagine if your muscles let go of your skin? You could just spin your skin around on your arm. Would that be kinda weird?" asked Kristine Weisbrod, Outdoor Recreation Planner at Willapa Wildlife Refuge while talking to a group of fourth-graders last week about the process of how some species of crab abandon their shells to find another.

"Eeewww, that'd be scary," said one of the kids, all the while getting closer to take a better look.

Such questions, answers and explorations were abundant as classes from Naselle and Star of the Sea schools visited the refuge last Friday.

Located along the Tarlatt Slough, the wetlands provided quite an unusual classroom. Along a swampy area called the "Frog Hotel," students used large nets to pull all manner of bugs, amphibians and other creepy-crawlies up for a better look. The best stuff - full-grown frogs, salamanders and tadpoles - were moved into a holding tank along the bank for closer inspection.

"This is the culmination of an all-year program with local fourth grade classes," said Weisbrod, who explained that volunteers from the refuge go into classes four times during the year. In May, the students come out for the all-day field trip at the refuge. Weisbrod said that the experience is a valuable one. "They get a lot better connection with the refuge. Though a lot of them live along the bay, many haven't been out onto the bay and seen a lot of the wildlife or shellfish that so many of their parents rely on for a living."

The day consisted of seven stations throughout the refuge, most of which taught by students from the natural resources and biology classes at Ilwaco High School. Weisbrod said that many of the students gain community service credit for their senior projects by teaching at the stations - many of which are researched by the students well in advance.

"So what's been really hard for you guys to find?" asked Emily Thorne, who taught at a station called "Eyes of the Eagle" which was a scavenger hunt of sorts. Students searched out items like small toys, car keys, pencils and play money along a dirt road, using their best eyes to locate the items hidden all up and down the site.

At another station, IHS student Bryan Tarabochia sat silently, blindfolded amongst a group of scattered students. The object of the game was for him to use his ears like a sleeping bear would, reacting to any intruders that maybe sneaking up on him. Another activity offered students a chance to hold and examine skulls of native animals to the refuge. All of this, according to Weisbrod, gives students a whole new way of looking at the refuge and its many inhabitants.

"It really brings it home a lot better for a fourth-grader than reading about it in a book," she said.

Expert: Thanksgiving could be 'mother' of superspreader events

How COVID-19 is impacting American seniors

Can you guess which actors these real 'Jeopardy!' clues are about?