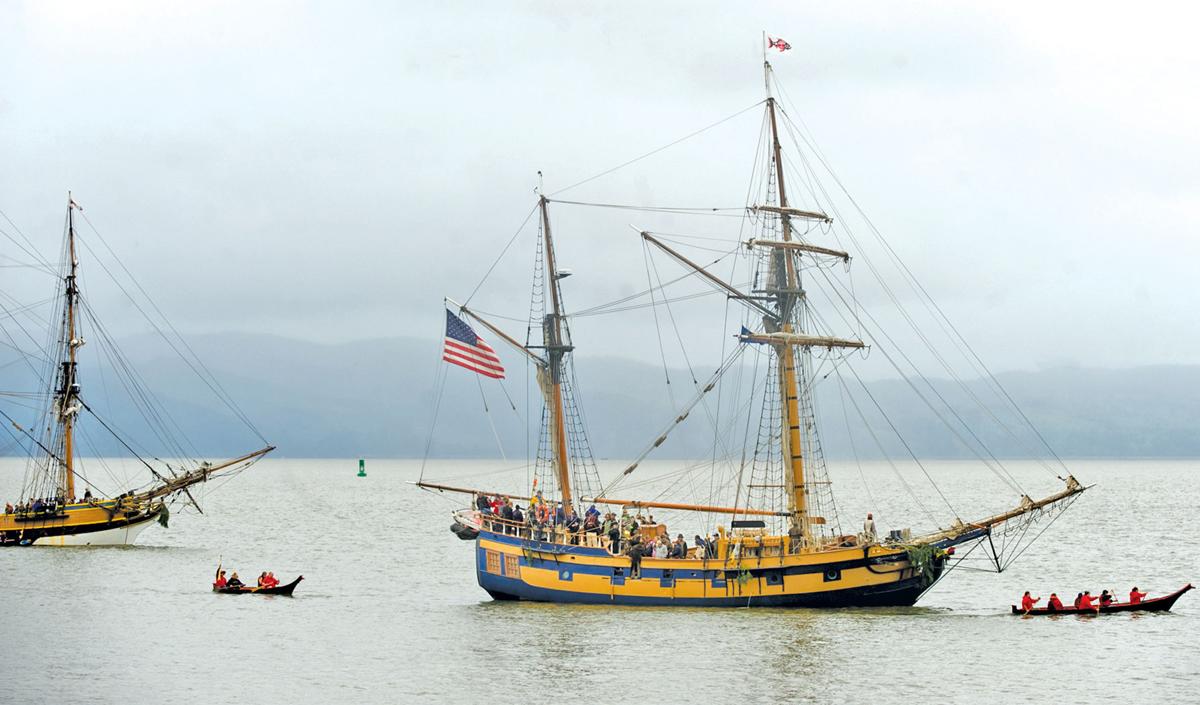 Reenacting a scene that became routine for decades surround 1800, in 2011 Chinook tribal canoes circled around the Hawaiian Chieftain, center, and the Lady Washington, left, on the Columbia River. The Chieftain will no longer be used to carry passengers. 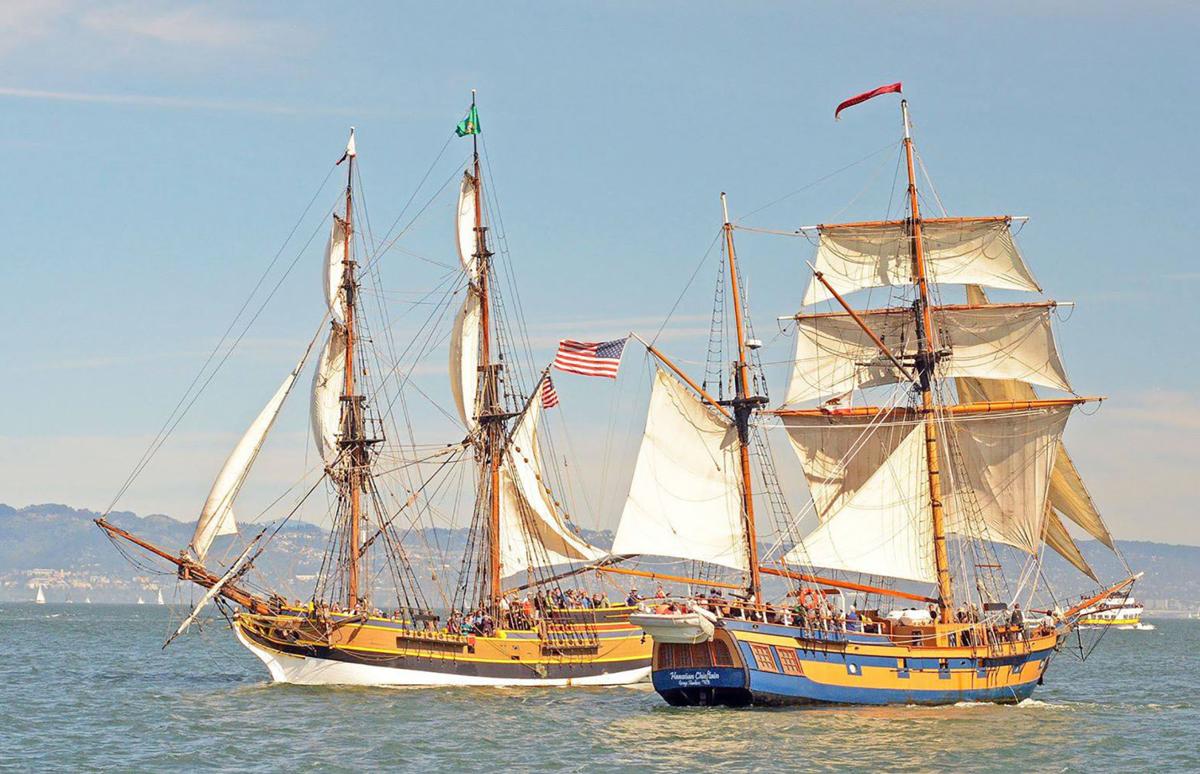 The blue and gold Hawaiian Chieftain often accompanied the larger Lady Washingon on voyages around the Pacific Northwest. 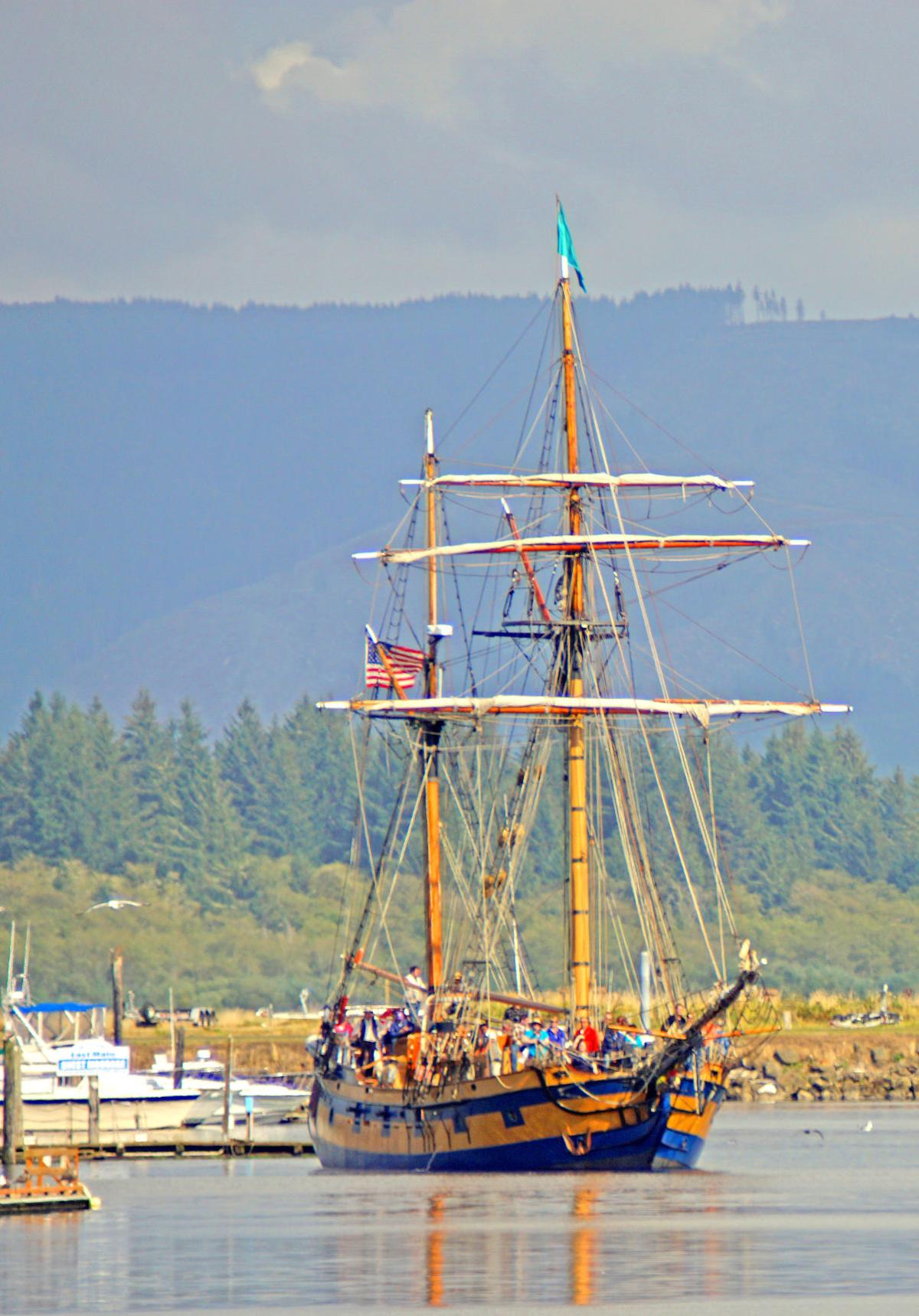 The Hawaiian Chieftain motored inside the Ilwaco mooring basin in 2017.

Reenacting a scene that became routine for decades surround 1800, in 2011 Chinook tribal canoes circled around the Hawaiian Chieftain, center, and the Lady Washington, left, on the Columbia River. The Chieftain will no longer be used to carry passengers.

The blue and gold Hawaiian Chieftain often accompanied the larger Lady Washingon on voyages around the Pacific Northwest.

The Hawaiian Chieftain motored inside the Ilwaco mooring basin in 2017.

ABERDEEN — The future of Grays Harbor Historical Seaport’s Hawaiian Chieftain is in serious doubt after Coast Guard inspectors discovered significant problems with the steel in her hull and bowsprit last year. The tall ship is forbidden from operating in her current condition.

A frequent visitor to the Port of Ilwaco and other Columbia estuary destinations, the vessel requires a Coast Guard certification to carry paying passengers.

Brandi Bednarik, executive director of Grays Harbor Historical Seaport, which owns and operates the Lady Washington and the Hawaiian Chieftain, said the seaport is going to put the Chieftain up for sale and focus its attention on the Lady Washington and developing Seaport Landing, the property it acquired from Weyerhaeuser on the south bank of the Chehalis River.

“We have come to the difficult decision that Hawaiian Chieftain’s role within GHHS is coming to an end,” Bednarik said in a news release.

“Hawaiian Chieftain has been an important part of our operations for nearly three decades, so this was a difficult decision to make. When the weather allows, we intend to bring her back to Aberdeen where she can be hauled out until a new owner is found,” the release said.

The 103-foot long tall ship has lost money every year except one since 2005, over $500,000 in total losses since the seaport has had the ship, according to Bednarik.

“We really need to invest that money into Lady Washington. She’s our flag ship and the heart of our organization. And then we’re committed to developing the Seaport Landing which is part of our original charter and why the city invested in us in the first place,” she said.

“This was a six-month decision that’s been discussed off and on for a few years. People have a lot invested in her, so it was an emotional decision. It wasn’t an easy decision, but I do believe it was the right one,” she added.

Other factors that contributed to the decision include a loan that that seaport has for the Hawaiian Chieftain and the amount of money already invested into repairs over the last several years, the release said. The seaport isn’t able to sell the Seaport Landing or part of the property due to an ongoing environmental cleanup.

“Even if we sell part of the property or our old property (which we are in a lease to own), that money will have to be used for the cleanup, it can’t be used for Hawaiian Chieftain,” the release said.

The Hawaiian Chieftain was constructed by Drake Thomas, owner of Lahaina Welding Company, on the island of Maui, according to the seaport. She was launched in 1988.

The seaport made a recent attempt to find affordable rates to repair it, but that didn’t work. “She was shifted from Port Townsend to Astoria in the hopes of less expensive repairs in partnership with Tongue Point, but the cost of repairs in either location is more than the current value of the ship,” said a release from the seaport.

The Lady Washington is currently at the seaport for her first extended winter maintenance period in at least 12 years. Contributions have allowed for an extensive overhaul and servicing of her rigging and systems in preparation for a busy 2020, the Seaport said.

In announcing the decision about the Hawaiian Chieftain, the Seaport also outlined its goals for the coming year, saying it plans to serve more students though their workforce development program, The Seafarer Collective and their Voyages of Explorers youth program.