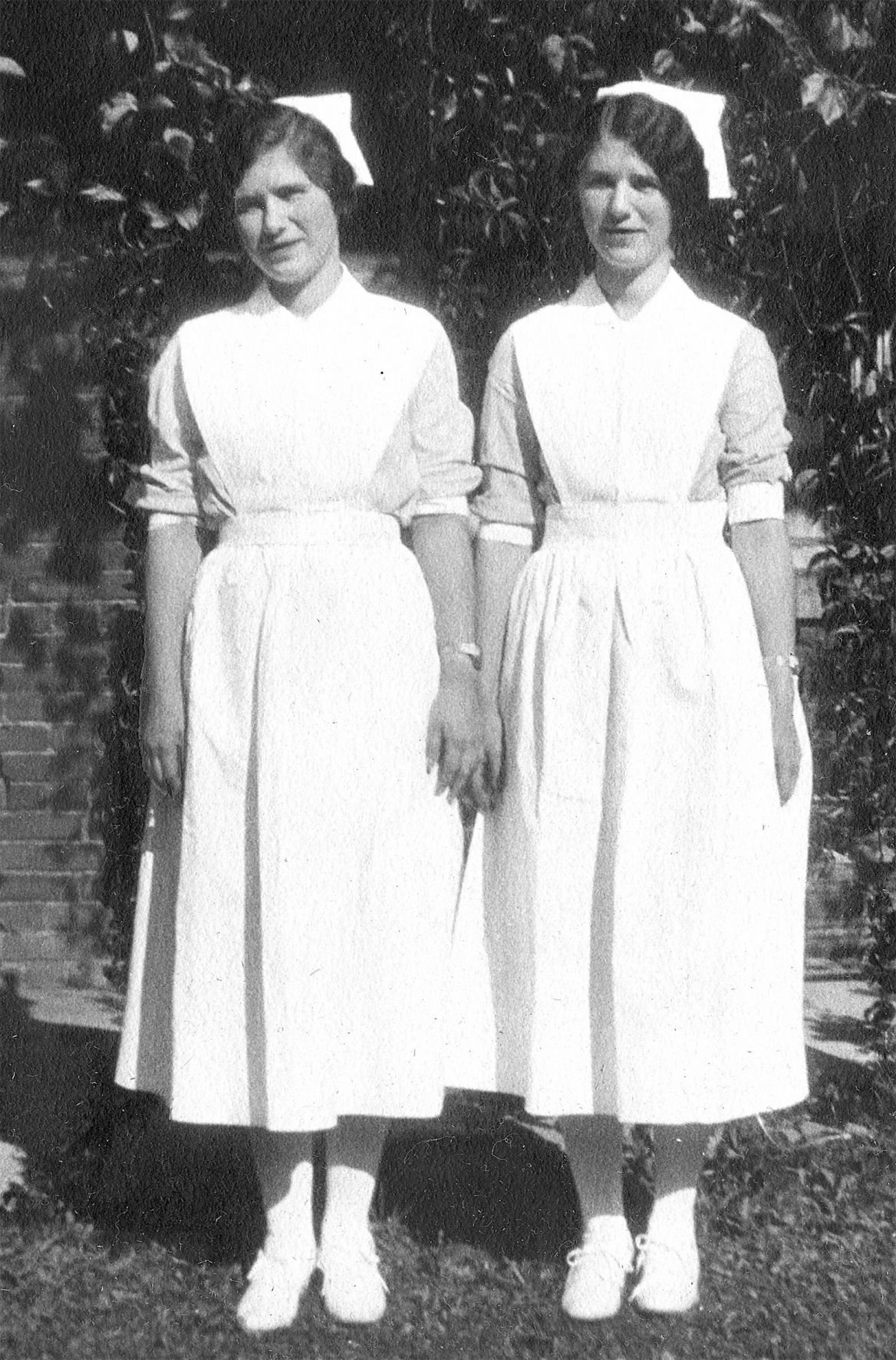 The Herrold twins, Catherine and Charlotte, graduated from St. Vincent's School of Nursing in 1931. “Mom thought she was the one on the left, but neither she nor Aunt Charlotte were ever sure,” says Charlotte Killien. 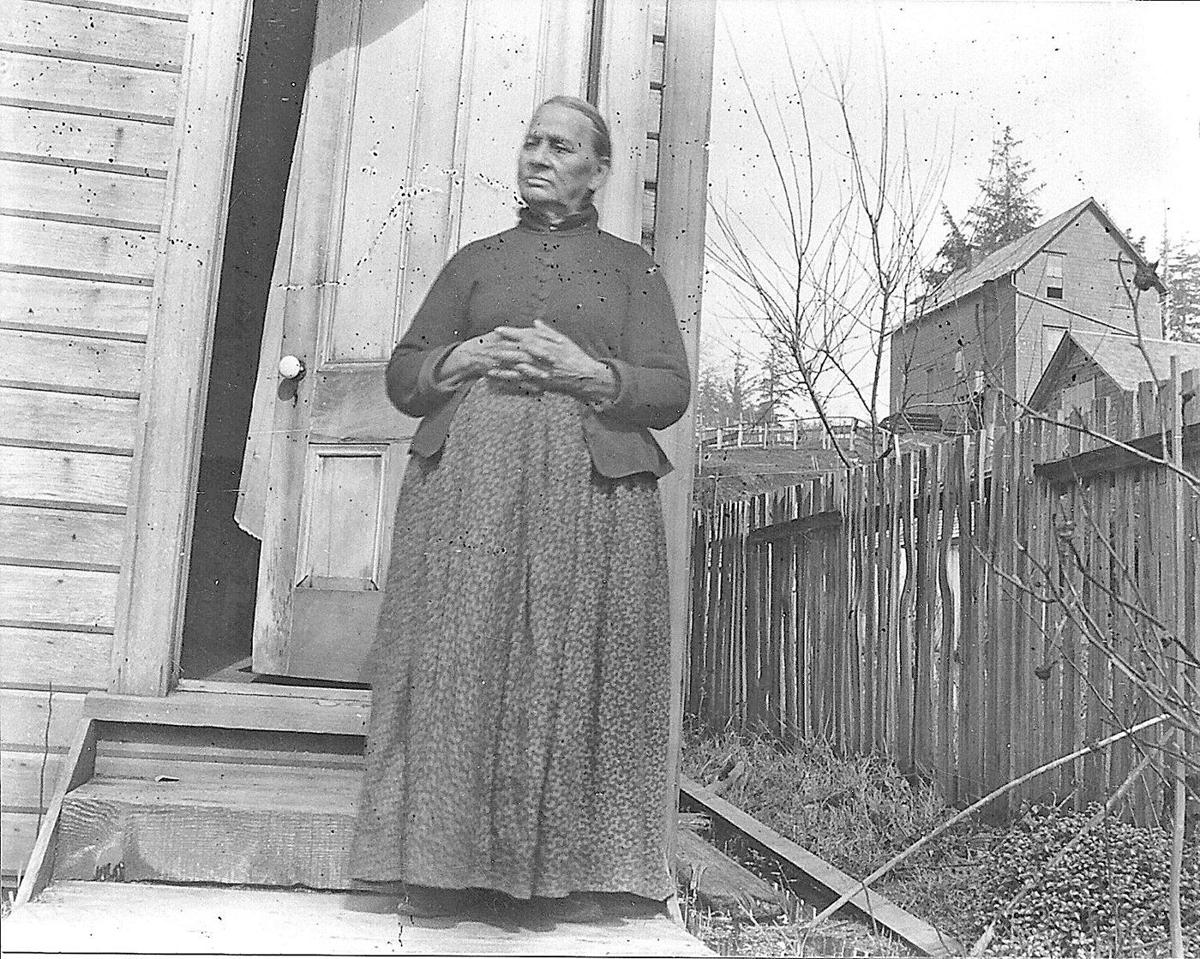 Grandmère Alvamox (Marianne) Aubichon Petit (1830-1924): Charlotte Killien's great-great-grandmother spoke French, smoked a pipe, and lived to be 94. She remembered when Fort Vancouver held sway over the Pacific Northwest, before either Washington or Oregon had become territories. 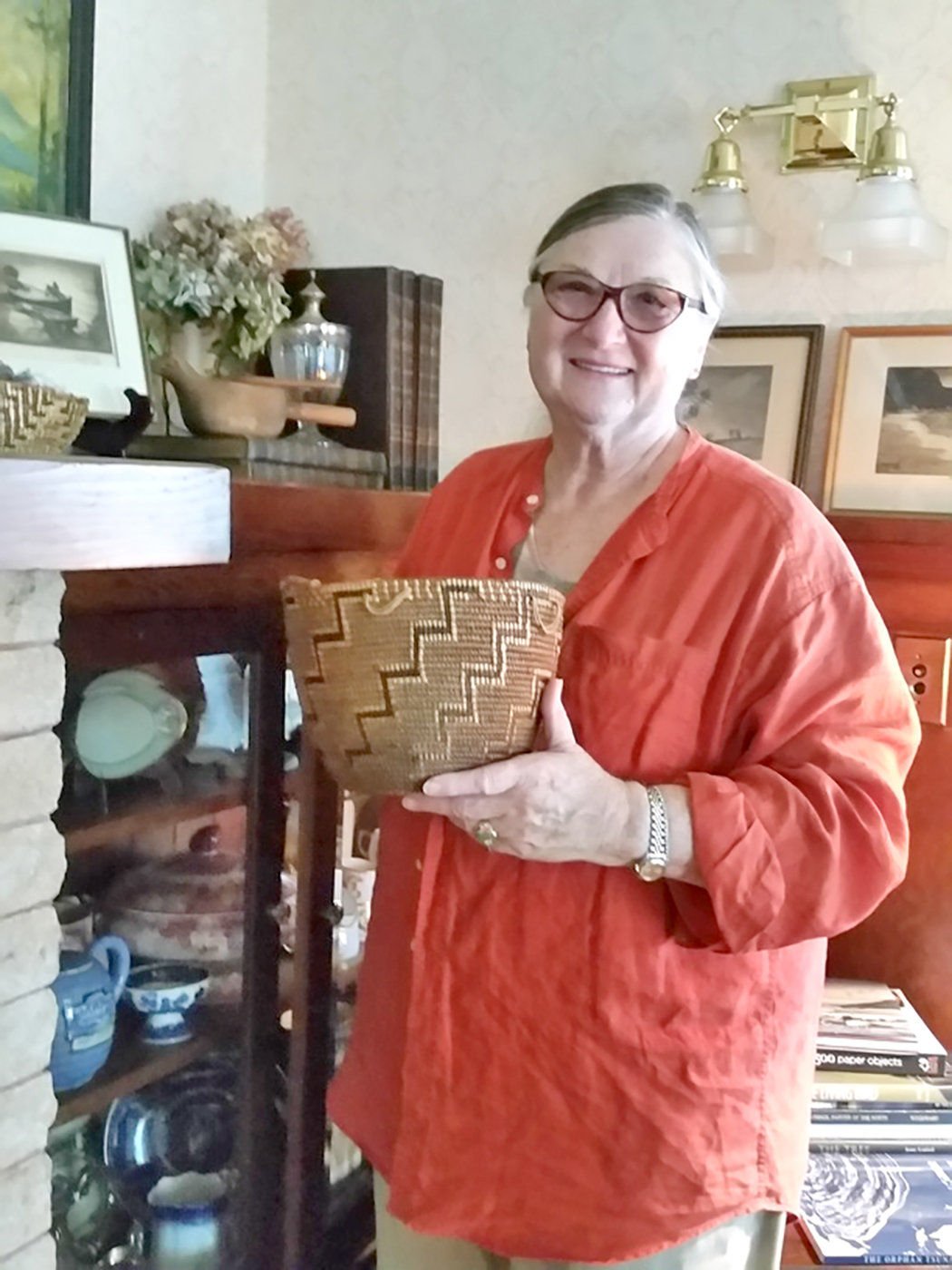 Charlotte Troeh Killien is pictured with a Chinook Indian basket at the George Johnson House in Ocean Park.

The Herrold twins, Catherine and Charlotte, graduated from St. Vincent's School of Nursing in 1931. “Mom thought she was the one on the left, but neither she nor Aunt Charlotte were ever sure,” says Charlotte Killien.

Grandmère Alvamox (Marianne) Aubichon Petit (1830-1924): Charlotte Killien's great-great-grandmother spoke French, smoked a pipe, and lived to be 94. She remembered when Fort Vancouver held sway over the Pacific Northwest, before either Washington or Oregon had become territories.

Charlotte Troeh Killien is pictured with a Chinook Indian basket at the George Johnson House in Ocean Park.

Editor’s Note: In this series, local historian Sydney Stevens examines the many connections among Pacific County residents — connections with one another and with the past; connections that bind us in special and unexpected ways.

“My three times great-grandmother was Alvamox, also known as Marianne,” Charlotte Troeh Killien began. “She was a cousin (or some accounts say granddaughter) of Chief Comcomly and she married Alexi Aubichon, a French Canadian fur trapper who arrived at Fort George, probably in the 1820s.”

We sat at the big dining table in the George Johnson House in Ocean Park, the bed and breakfast that she owns and manages and that serves as her headquarters when she is on the Peninsula. Spread before us were documents and photographs, letters and biographies — incredible, precious documentation about her lineage going back to 1791.

“That’s when (maybe) Alexi Aubichon and his brother left Alsace, France to avoid Napoleon’s conscription. They went to Three Rivers, Quebec and became involved with the American side of the War of 1812. Sometime after that, Alexi joined up with some fur trappers and eventually arrived out here on the Columbia River at Fort George.”

Like many genealogies, Charlotte’s once had a number of “maybes,” especially with regard to the Chinook Tribe. “Nothing was written down until my mother, Catherine Herrold Troeh and her sister Betsy Herrold Trick, began to expand the tribal register in the 1950s,” says Charlotte.

“It wasn’t only a list of our own family’s forebears and living relatives they searched for,” Charlotte continues, “but of all the Chinook families who had allotments or were on existing rolls and going back to the time of the treaties. All the descendants — the current people for whom they had addresses. They sent out a questionnaire to almost 500 people — not just to those in Pacific County but to everyone. It was a huge undertaking!”

The questionnaire was extensive: Four pages, 37 questions to be signed, sworn to, and notarized. It was mailed with a simple two-paragraph cover letter saying, “Your prompt cooperation in this matter will be appreciated.” Accompanying each questionnaire were pages of ancestry charts that each claimant of Chinook ancestry was asked to fill out. The information gathered remains on file as a major part of the official tribal record.

“Currently, the index of my own family members numbers 379! Of course, most of them and their stories have passed,” she says.

And to the question, “Do you, personally, trace your forebears and current relatives entirely through the tribe?” the answer is an emphatic, “Yes! A glance through any of the local phone books reveals dozens of surnames who are somehow connected to my immediate family — Petit, Meriwether, Herrold, Colbert, Mullen, Goodin come to mind.

“We may not see one another often, but we keep track of each other, and get together at ceremonies and on special occasions. I was amazed to see so many of our local people down in California at my cousin Chris Stevens’ funeral back in 2012.”

We were silent for a while, perhaps both thinking of the bitter irony of his death — this member of the yet “unrecognized” Chinook Tribe, killed in Benghazi by militants while he was serving as the U.S. ambassador to Libya.

From the time of the first treaty attempts here in the 1850s and continuing for the next century, Chinooks did not often speak about their ancestry.

“Even when my mother and her siblings were children they didn’t talk much of their Chinook heritage, even though their beloved Grandmère was still alive. Being Indian was not a good thing to talk about outside the family and tribe, even in the early 20th century. In fact, it could be dangerous. It was better to keep a low profile.”

The woman referred to in Charlotte’s family as “Grandmère” was the daughter of Alvamox and Alexi Aubichon. She was called Amelia and was born in 1830 near Sacramento, while her parents were on a trading expedition for the Hudson’s Bay Company — trading for cattle and horses at the Missions of California.

The historic record shows that, by the time Amelia was 12, her parents and their five children had settled in the Willamette Valley along with a number of other former employees of the Hudson’s Bay Company. Many of the 83 families there were of French Canadian and Indian heritage and the area became known as French Prairie. Amelia, herself, years later told of some of the amazing experiences she had as a young girl.

She remembered watching Mount St. Helens “burst” in the mid-1840s; she knew Dr. John McLoughlin, factor of the Hudson’s Bay Company; and she knew a young man named Ulysses S. Grant, who would go on to become a Civil War general and, later, president of the United States.

“The family often re-told Grandmère’s story about the bob-tailed pony and the range of mountains that shared a common name: Skuse. During the 1829 mountain crossing by the McLeod party — probably the crossing just before Grandmère Amelia was born — a bob-tailed race horse was lost. Since the Chinook jargon word for bob-tailed horse was “siskiyou,” the mountains where the horse was lost are called Siskiyous and the pony is now called Cayuse.

Charlotte particularly loves Grandmère’s memory of the beginning of the wheat-raising industry in Oregon Territory when the sacked grain from French Prairie was brought down the Willamette River in bateaux operated by Indians.

“It was eventually taken to ships waiting at a placed called ‘Boatland’ by the whites but was pronounced ‘Portland’ by the Indians. Grandmère remembered that the name for this new city was chosen by the flip of a coin,” Charlotte says.

“I wish I’d known her. In 1866, she and her husband Amable, with 10 of their 13 children, settled in Chinookville east of present-day Chinook, near the site of Lewis and Clark’s 1804 Station Camp. They later moved a few miles to the west on Baker Bay to be near their daughter and son-in-law, Catherine and Frederick Colbert, who were my great-grandparents.

“When Ilwaco was settled in the 1880s, most of the Indians were run out, but Grandmère Petit, by then a widow, was one of the few who stayed. She died in 1924 at age 94. My mother was 13 and she remembered that the Indians all came from Bay Center and sat cross-legged facing the Presbyterian Church during her funeral. What mom didn’t add,” Charlotte muses, “was that they were probably uncomfortable entering the church or, perhaps, were not even allowed inside.”

It was great-grandmother Catherine who realized that the way to get ahead was through education.

“She and her husband, Frederick Colbert, also lived in Chinookville. They had built a house and store there but, as their oldest children approached school age, Catherine insisted that they move downriver a few miles to be closer to the new public school in Ilwaco. There, Fred went into the burgeoning fish trap business and they constructed a sturdy house from their Chinookville buildings. Today that house, known as ‘The Colbert House’ is on the National Register of Historic Places.”

Catherine’s daughter Elfreda attended the Ellensburg Normal School and was in the first graduating class of 1894.

“She taught at the old Ilwaco High School, now Hilltop. There are many educational firsts in the family,” says Charlotte. “My Aunt Betsy Herrold Trick was the first woman to graduate from the University of Washington in the School of Fisheries.

“My mother Catherine, and her twin sister, my Aunt Charlotte, took the boat up to Portland during the Depression so they could attend nursing school at St. Vincent’s. They missed the coast so much that they both had their tonsils removed at the same time so they could recuperate at home. I asked mom if they really needed them removed, and she laughed and said ‘No,’ but it was the only way to have a break from the nuns!”

“The twins and their siblings — there were six altogether — had great stories about growing up in Ilwaco, about taking the train to Nahcotta and spending the summer on the oyster station out in the bay where their father Roy Herrold worked. They told about sitting on the scows eating oysters and about picnicking ashore at Fresh Water Creek and about eating Theophilus Goulter’s canned beef that they got in Oysterville.”

All of that generation, according to Charlotte, grew up to be active in tribal concerns.

“When we moved to Seattle, my mother joined a group called “Small Tribes of Western Washington” and not long after that her twin, my Aunt Charlotte after whom I was named began the research for the four-book series, ‘They Remembered’ that she wrote with her husband Edgar Davis.”

Those books explored the heritage of tribal families as well as other ethnic groups and pioneer families who came to this area and stayed.

“Though we left Ilwaco when I was in first grade, we always considered it ‘home.’ I think everyone in the family does. It’s where our roots are,” Charlotte says.

“In 1971, my folks bought the George Johnson house in Ocean Park to be close enough, but not too close, to the Ilwaco family!” she laughs. “But, really, no matter where we are in this part of Washington, we’re near family! We have cousins everywhere!”