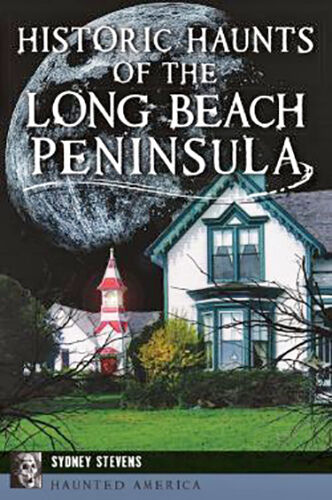 “Historic Haunts of the Long Beach Peninsula,” by Sydney Stevens

• Paperback, $21.99; Amazon Kindle, $12.99, or at Adelaide’s in Ocean Park, Bold Coffee, Art and Framing and the Cranberry Museum in Long Beach and Time Enough Books and the Columbia Pacific Heritage Museum in Ilwaco.

• Book talks are planned this summer on dates to be announced. 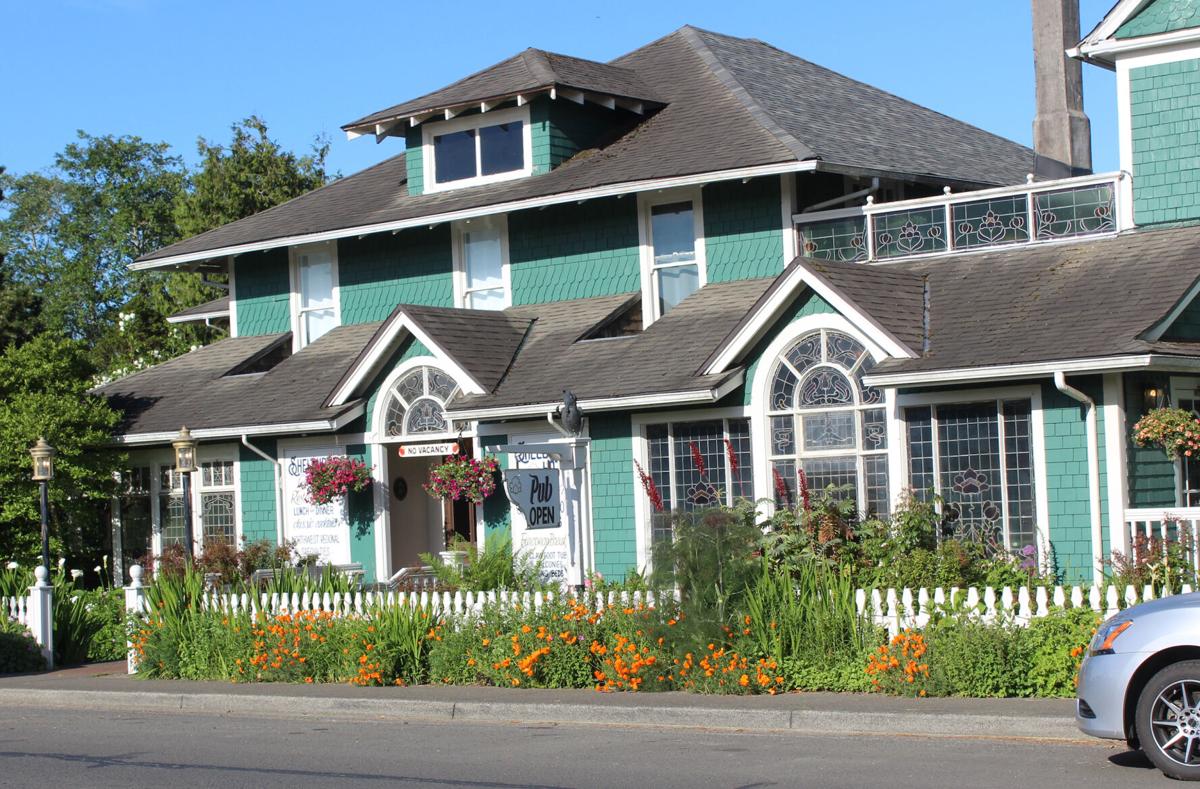 The Shelburne Hotel in Seaview has had its history of ghostly happenings over the years. When “Madam X” inspected in recent times, she suggested removing a brass bed, in a room where Julia Hoare, the wife of the second owner, had lived, that may have contributed to “negative energy” in the building. 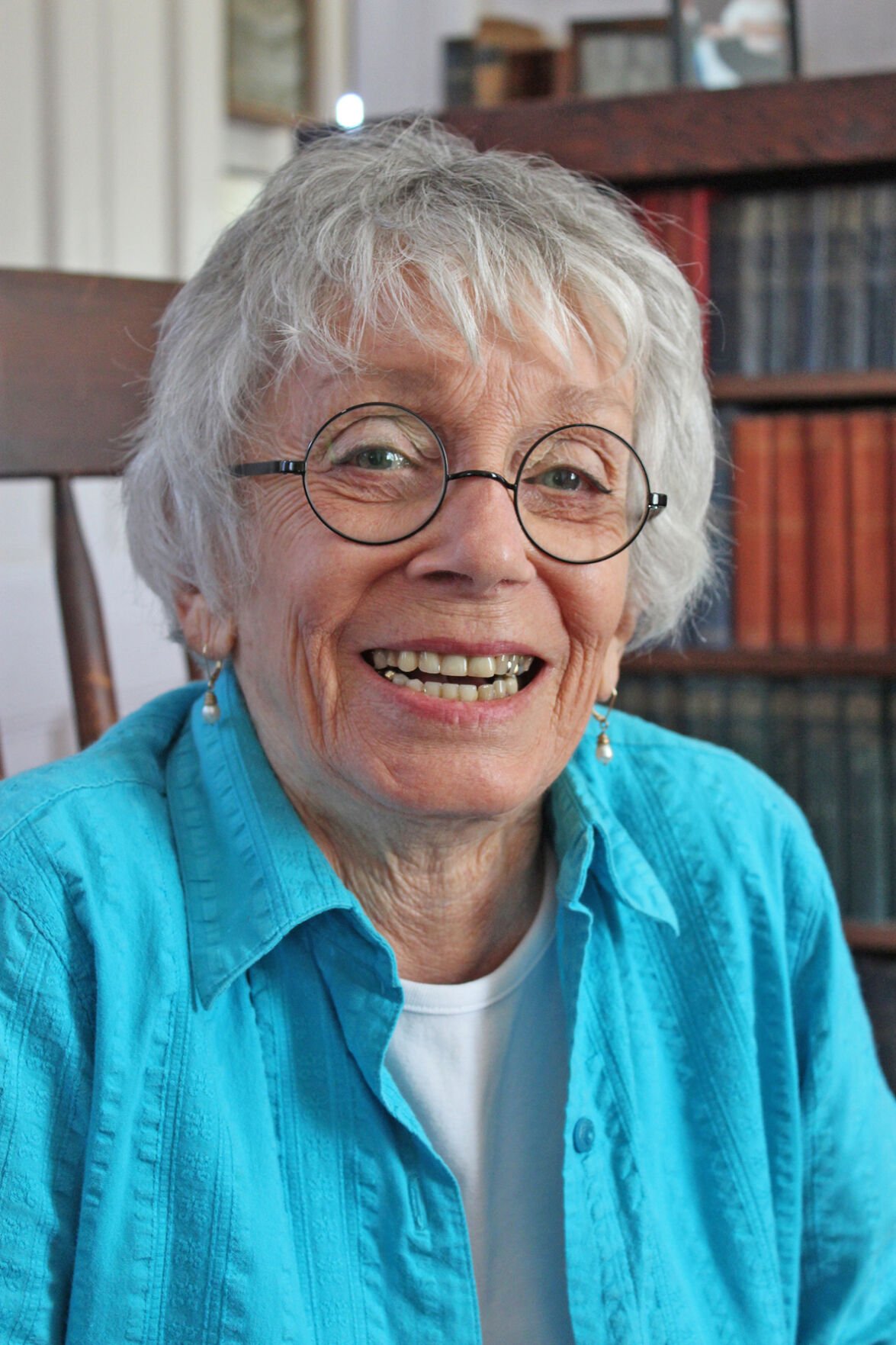 ‘She definitely feels like a mischievous, yet beloved, member of the household.’ 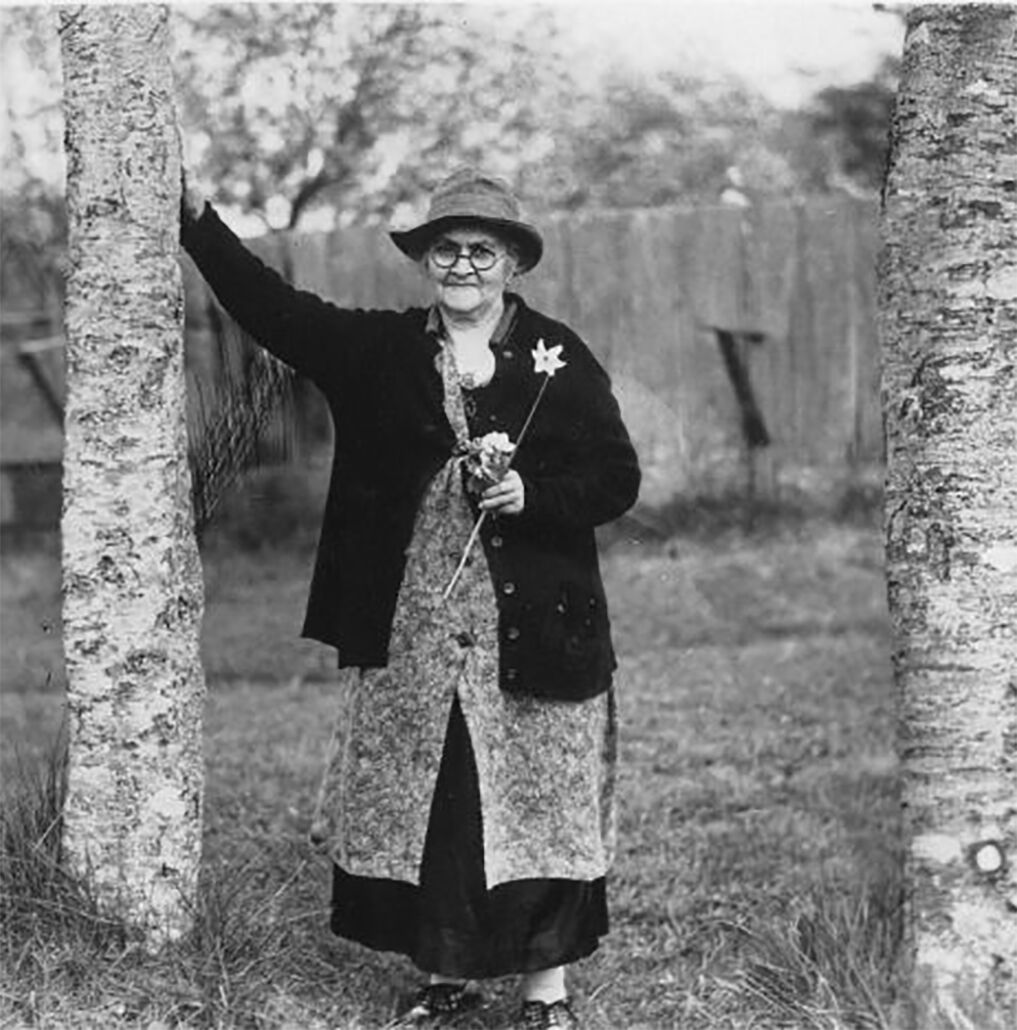 Adelaide Stuart Taylor lived from 1861 to 1940 and was the co-owner of the Taylor hotel on Bay Avenue in Ocean Park, now the site of Adelaide’s Coffee Shop. Colleen Kelly, the owner, maintains she still inhabits the upstairs. “We like having her up there,” Kelly said.

The Lamplighter Restaurant in Seaview has had a fair share of ghostly reports, including a ghost of a cook who bashed pots and pans together and allegedly pinched the female staff.

Sydney Stevens is pictured outside the Oysterville Church, which is opposite the historic Crellin home where she lives with husband Nyel. Her latest book highlights ghost stories connected with her home, public locations on the Long Beach Peninsula, and private houses in Ocean Park, Ilwaco and Chinook.

But she will admit a solid interest.

As the great granddaughter of R.H. Espy, co-founder of Oysterville, she lives in the 1869 house, the former parsonage where the community’s first Baptist minister, Josiah Crouch, had lived with his wife and child.

Though insisting no hackles were raised, Stevens admits some odd encounters. “She definitely feels like a mischievous, yet beloved, member of the household,” she writes.

The work was published June 21 by Arcadia Publishing of Mount Pleasant, South Carolina, a division of The History Press, as part of its Haunted America series.

It nearly didn’t happen. A cousin in Virginia fascinated by genealogy was researching the seedy life of the Rev. Crouch, who had traveled from Arkansas with his bride and 18-month-old baby to minister at Oysterville. He fled town when suspected of drowning his wife.

This sparked Stevens’ renewed interest. “I thought there should be a next step to the story,” she said.

Arcadia had published Stevens’ “Ghost Stories of the Long Beach Peninsula” in 2014 but editors feared a sequel would not sell. Stevens, who operated the BookVendor store at the Pacific Highway-Bolstad Avenue intersection in Long Beach for 10 years, argued from experience that was a myth — sequels sold well, and even boosted sales of the original.

“I don’t know if it’s really a ‘sequel’ or not,” said Stevens, highlighting the locations covered in her latest work. “Some are continuations from the first book, but there are some new stories, too.”

Her family home, the Crellin House, which reverted to the Espy kin in the 1970s once it was no longer used as a parsonage, figures in the central tale.

Sarah Angeline Crouch drowned in the Willapa River while on a church call. Her husband told authorities their sailboat tipped over; he survived, and rescued their child. Suspicions caused her body to be exhumed from the Fern Hill Cemetery in South Bend. The sheriff reportedly discovered strange marks on her neck. A coroner’s court jury recorded an intentionally doubtful verdict and Josiah disappeared when an arrest warrant was issued.

Later records trace him to California, as many as 13 marriages, plus criminal activities which landed him in San Quentin. He died in 1942.

The Shelburne in Seaview, one of the most historic hotels in the Western States, featured in her earlier ghost book. Details of unidentified ghostly presences are updated with comments from Tiffany and Brady Turner, who took over the 1896 building from longtime Peninsula character David Campiche and wife Laurie Anderson. Campiche had reportedly often heard noises there, and a Canadian psychic claimed the presence of Charles Beaver, the builder.

Stories concerning the Lamplighter restaurant, a few blocks south in Seaview, are new, with multiple hauntings including a murdered barmaid, Lily, (sometimes known as Katherine), a noisy cook who bangs pots and pans, and 4-year-old twin girls who burned to death in a fire.

Stevens recounts how she and the late Kay Buesing went ghost-searching there, finding none, but were intrigued to discover an urn containing ashes of former owner-cook Louie Sloan (1897-1977).

The Ilwaco Timberland Library and other community operations are based in a 1938 building that once was the Ilwaco hospital where longtime physicians John Campiche (David’s father) and Lewis Neace practiced.

Tales of a haunting presence, including a piano that played itself, voices in hallways, and doorbells that rang when no one was there, led to a 2003 visit from a dozen equipment-laden paranormal investigators. They reported strong activity, but no photo evidence. “Haunted or not, I love it here,” said former librarian Kris Pointer. “My conclusion is we’re not supposed to know everything.”

Another key impetus for the book was Stevens’ encounters with a woman who claimed psychic connections. “Madam X” lived on the Long Beach Peninsula for 30 years.

“I met this woman in Ocean Park,” said Stevens, who wants to keep her promise of anonymity, even though the woman died a year ago. “She said she had ‘the gift.’ Other people called her a ‘ghost buster.’”

Madam X’s approach, like mediums claiming similar abilities throughout the past 200 years or more, was to try to contact supposed ghosts and dissuade them from haunting behavior, especially disruptive actions that frightened or annoyed the living.

“She developed a reputation that was very helpful to some,” said Stevens. “And some people will recognize her from the book.

“She wanted to help people who were bothered by ghosts and those people (spirits) who were ‘stuck’ — obey the rules or move on. Madam X had a really gentle philosophy about ghosts and I had heard about these stories.”

Madam X’s Peninsula clients were varied, her advice unusual. She suggested removing a brass bed from the Shelburne and the Turners complied. Colleen Kelly operates Adelaide’s Coffee Shop, named for Adelaide Stuart Taylor, a former midwife who with husband Bill, opened the Taylor Hotel on Bay Avenue in 1887. Madam X reported sensing a woman waving from a window. Stevens notes that Kelly admonished her not to try to make the spirit leave. “Heavens no!” Kelly told her. “This is Adelaide’s place! She belongs here more than any of us.”

Another oddity featured is the George Johnson House in Ocean Park, inevitably associated with bad luck because it was built in 1913 and had 13 corners in the living room. Stevens recounts examples of noises which the owner believes came from a water tank, not ghosts (though a longtime friend is not so sure). Unsettling reactions of a couple of dogs fuel further speculation.

Similarly, Crow Cottage at Elizabeth and Spruce streets in Ilwaco, has links to a long-gone Finnish bath house. Owners Stephanie Frieze and Dave Haeck report hearing footsteps — but only when each was alone.

Stevens recounts one such event involving Frieze. “As she heard more footsteps, she suddenly thought, ‘That’s odd. I’m the only one here.’ There was nothing threatening or ominous feeling, so she just went on reading. “Eventually, it became silent, and I realized that whoever it was had gone away.”

Chinook has its turn in the limelight, as Johanna and David Gustafson describe odd happenings at their 1902 two-story farmhouse home on Evelyn Road. Johanna maintains the ghost of her Grandma Provo warned her in time to escape a night fire that destroyed outbuildings. Other unusual events include unexplained sounds of footsteps, a child claiming they saw a mystery man in their pantry, and a photograph of a blonde girl and large dog that once floated out of a staircase wall.

When another child reported seeing a big dog in the house, Johanna went to find the photo in her dresser to see if the boy recognized it. The photo had disappeared.

The history of it all consumes Stevens, who is 85. She was born in Boston, Mass., and moved west with her family when her father was transferred by retail giant Montgomery Ward. She attended Stanford University but discovered that, as a woman, she could not easily break into journalism.

Instead, newly divorced and needing to support her young son, she earned her teaching credentials at San Francisco State University. She taught elementary school for 16 years in Haywood, California, near Oakland, serving a stint as president of the teachers’ union.

From the age of two, she had enjoyed summers and some Christmases in Oysterville with her parents, and spent her seventh-grade year there. A past Ocean Beach School District superintendent, aware of her Peninsula connections, recruited her in 1978.

She taught 23 years, savoring a blended classroom that mixed first, second and third grades. “I loved every minute,” she said. “I miss it.”

The latest book is her 17th in print, and sixth with Arcadia Press. Her writing also appears in the Chinook Observer. The newspaper’s columnist Cate Cable provides the foreword, describing the author as a “skilled and reliable guide” on an “enchanted narrative footpath.”

Stevens concedes her book will not put to rest the eternal question.

“It’s not fascination or fear,” she said. “It’s that unknown that we all live with: What really happens to us when we die? Because, as far as I know, no one has ever come back and told me!

“We don’t know the whole story about how the planet got here — it’s all that unknown stuff.”

“Its one way of asking questions that don’t have definitive answers, but it’s also a way of looking at history.”