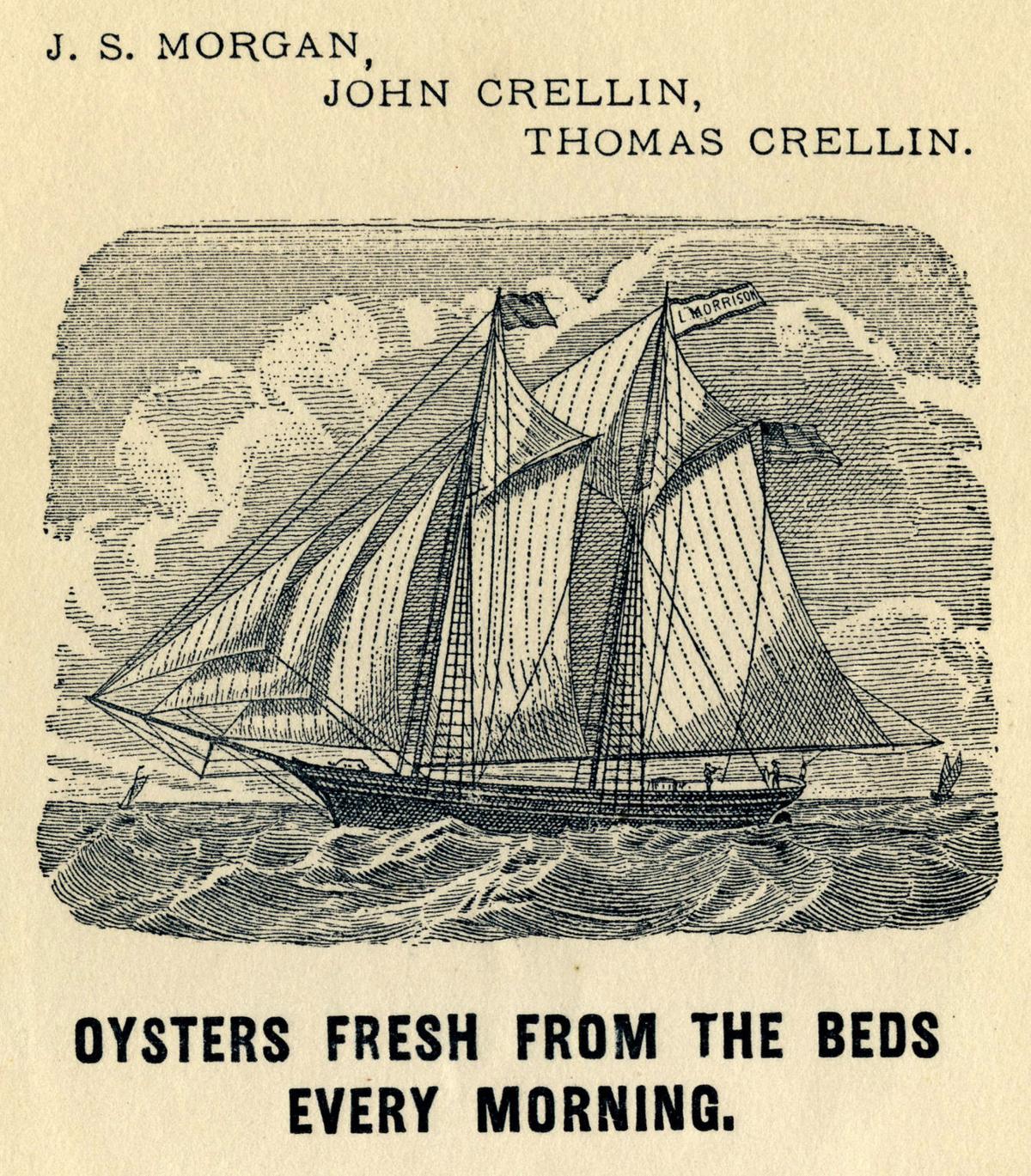 The Louisa Morrison served Morgan Oyster Co. for many years and transported some early settlers to Willapa Bay. 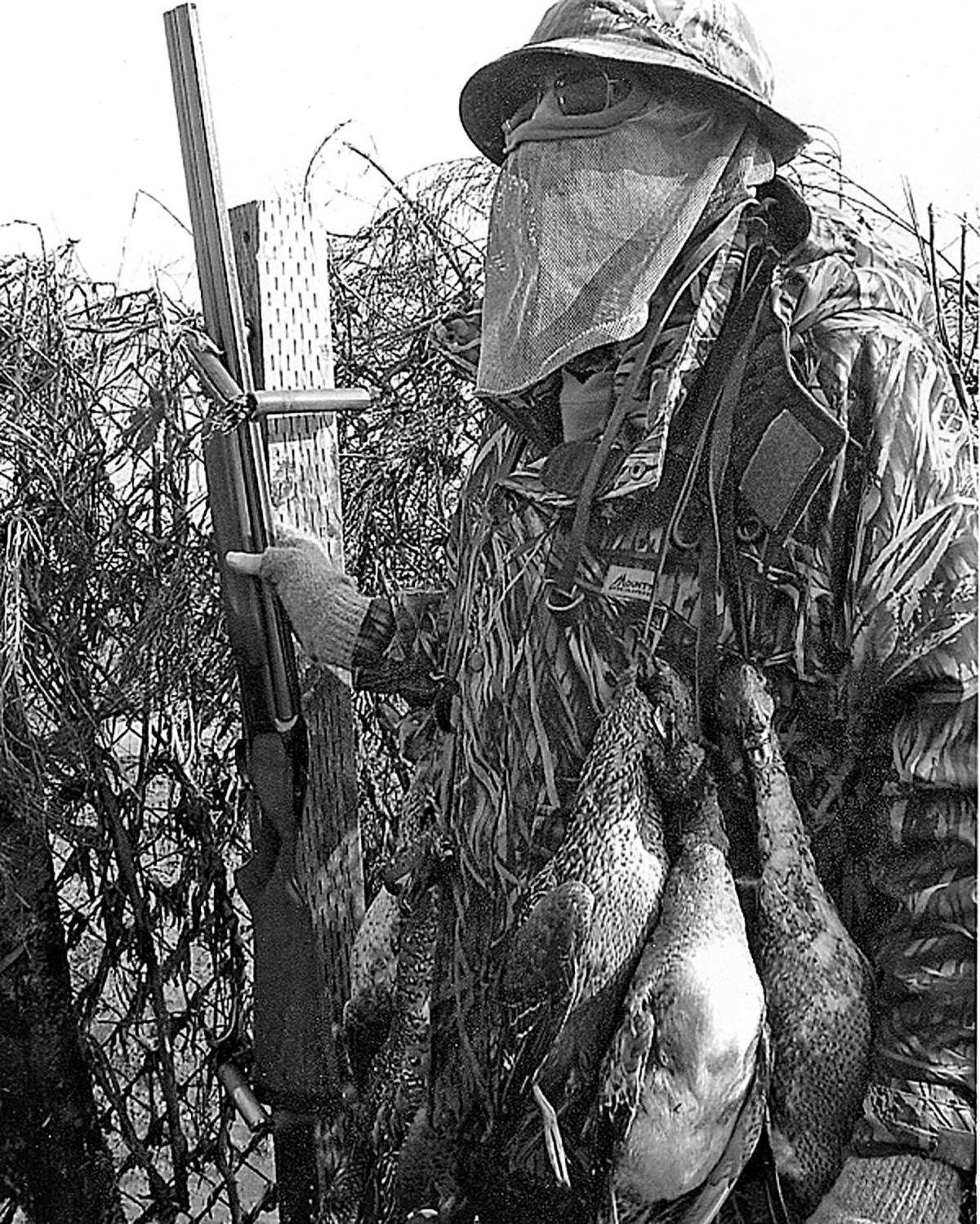 Dobby-the-Duck-Hunter. “If it hadn't been for Heinrich Wiegardt, there wouldn't be nearly so many duck hunters on the Peninsula,” Dobby Wiegardt laughs. So far, five generations of “Grandpa Heinrich's” descendants have enjoyed duck hunting, many of them taught by Dobby, himself. 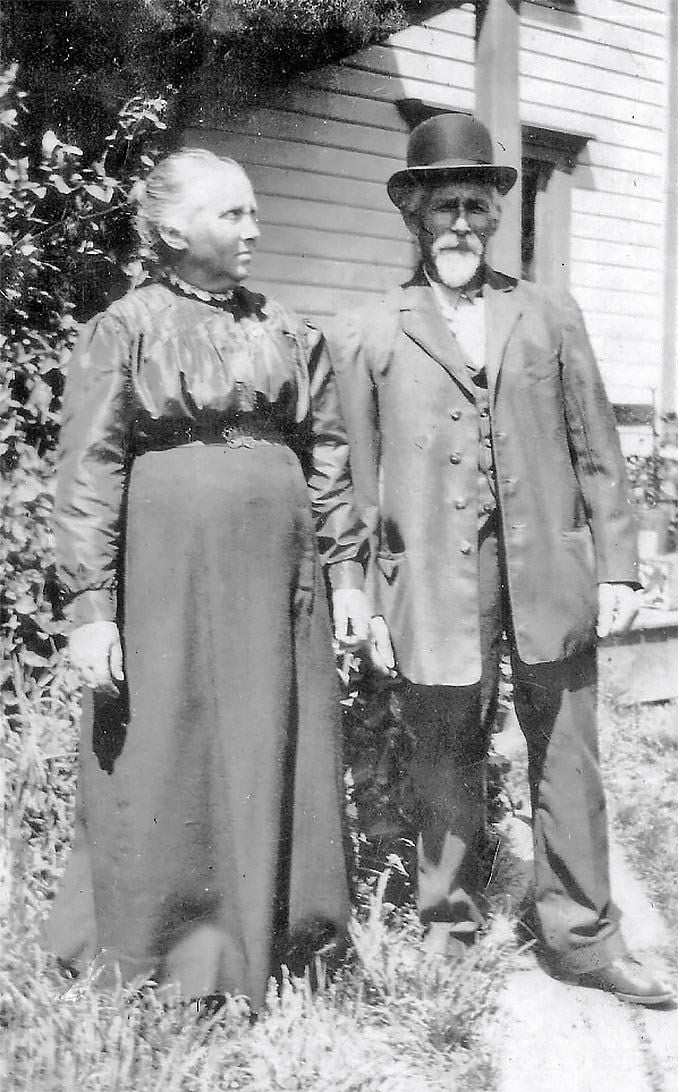 Laurine and Heinrich Wiegardt were married in Bruceport in 1884 and, in the early 1900s moved across the bay to the Peninsula. They are pictured here circa 1920 in front of their Ocean Park home which now serves as their great-grandson Eric's watercolor studio and gallery. 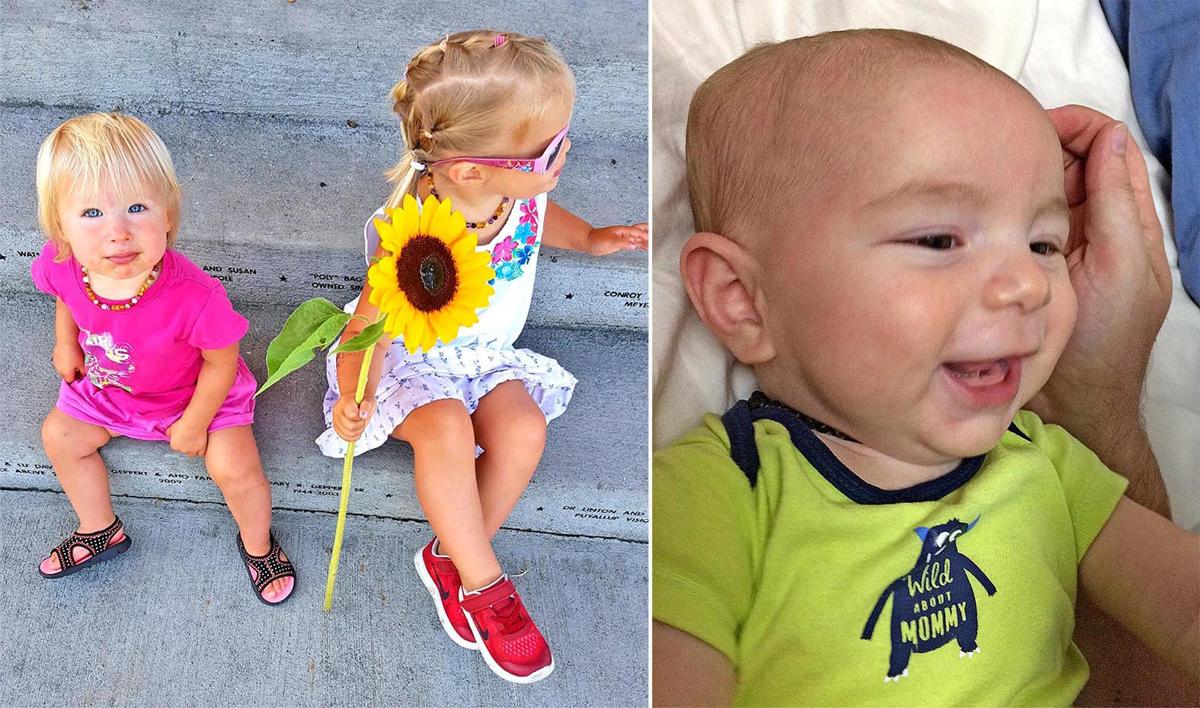 Dobby Wiegardt looks forward to the day when he can begin teaching the art of duck hunting to his great-grandchildren whose pioneer ancestors were a part of the early oyster industry on Shoalwater Bay. 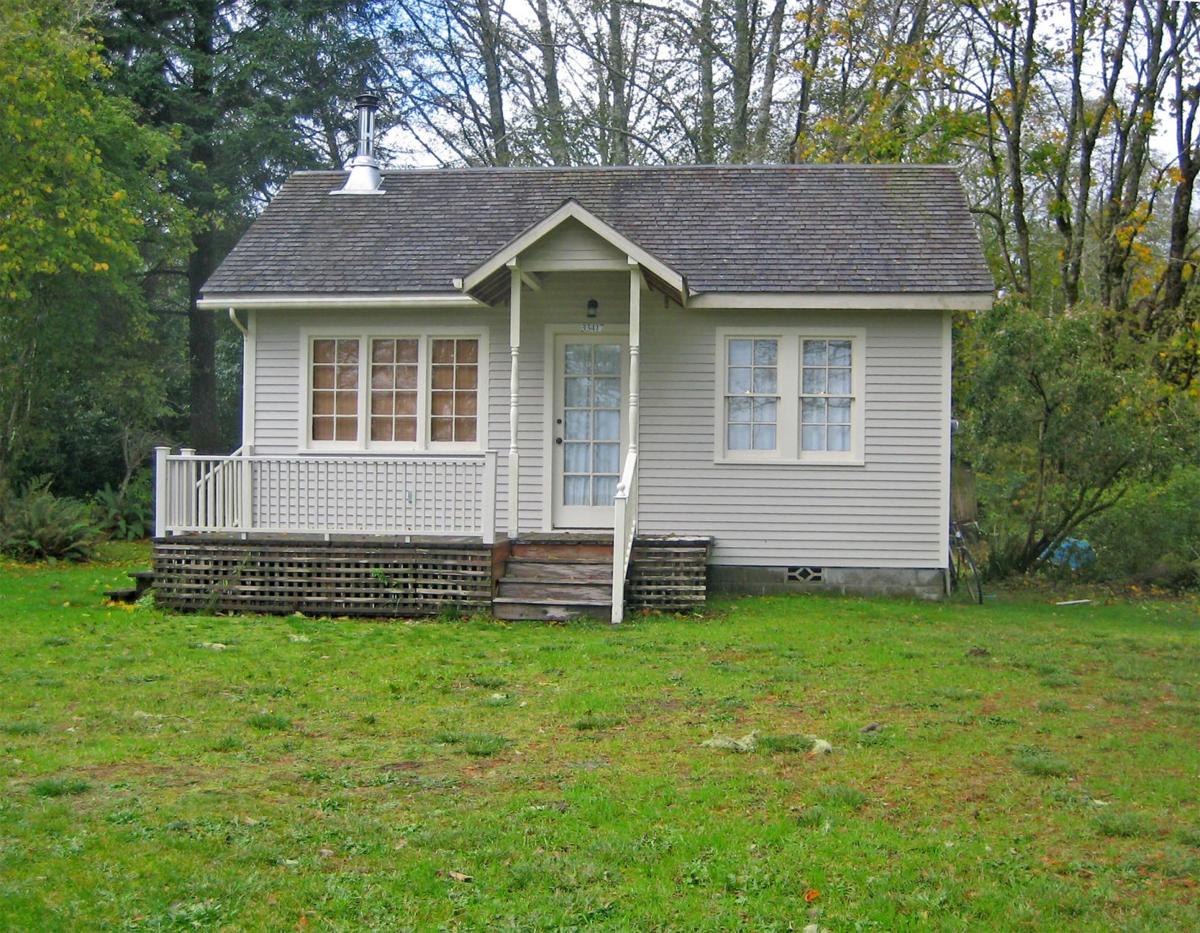 Charles Nelson House. Located on Nelson's Corner in Oysterville, this little three-room house was built in 1873 by Charles Nelson, Sr. for his bride-to-be, Anna Parker. The house was carefully restored by present owners in the early 1990s.

The Louisa Morrison served Morgan Oyster Co. for many years and transported some early settlers to Willapa Bay.

Dobby-the-Duck-Hunter. “If it hadn't been for Heinrich Wiegardt, there wouldn't be nearly so many duck hunters on the Peninsula,” Dobby Wiegardt laughs. So far, five generations of “Grandpa Heinrich's” descendants have enjoyed duck hunting, many of them taught by Dobby, himself.

Laurine and Heinrich Wiegardt were married in Bruceport in 1884 and, in the early 1900s moved across the bay to the Peninsula. They are pictured here circa 1920 in front of their Ocean Park home which now serves as their great-grandson Eric's watercolor studio and gallery.

Dobby Wiegardt looks forward to the day when he can begin teaching the art of duck hunting to his great-grandchildren whose pioneer ancestors were a part of the early oyster industry on Shoalwater Bay.

Charles Nelson House. Located on Nelson's Corner in Oysterville, this little three-room house was built in 1873 by Charles Nelson, Sr. for his bride-to-be, Anna Parker. The house was carefully restored by present owners in the early 1990s.

Editor’s Note: In this series, local historian Sydney Stevens examines the many connections among Pacific County residents — connections with one another and with the past; connections that bind us in special and unexpected ways.

That Gustave (“Dobby”) A. Wiegardt, Jr’s granddaughters, who are sisters, married brothers a few years back was a noteworthy occurrence in itself. When Dobby made the discovery that this was a marriage between the great-great-grandchildren of two notable Pacific County pioneers, “noteworthy” took on generational proportions.

That those pioneers were Heinrich Wiegardt and Charles Nelson, Sr. who both came to Oysterville in the mid-19th century and who both were noted oystermen in Shoalwater Bay, gives the story an almost storybook quality. The sisters are fifth-generation Wiegardts and grew up here on the Peninsula. The brothers, fifth-generation Nelson descendants (whose surname is not Nelson), grew up in Hockinson, Washington, and, now are renewing their Oysterville heritage. Did their great-great-grandfathers know one another? “I have no idea,” says Dobby. “But it stands to reason that they did.”

Heinrich Wiegardt, better known to his family as “Grandpa Heinrich,” grew up in Schleswig Holstein in Denmark. He remembered that there was never quite enough food for the family and when Prussia annexed the region in 1866, Heinrich ran way to sea, sailing out on an English ship headed for Patagonia.

Wiegardt’s adventures aboard ship were hazardous in the extreme. He remembered a nightmarish voyage around Cape Horn when the ship was beaten back five times by wind and high seas before she rounded the Horn successfully. On another occasion, the ship he was serving on ran aground and he and a shipmate spent three months on a desolate island before being rescued.

Eventually, young Heinrich joined the Peruvian navy, served time on a man-o’-war, and then deserted for an English ship bound for California. Though he arrived safely, he soon learned that the German Consulate had ordered his return to Schleswig Holstein to begin service with the German military. Once again, he jumped ship and, this time, found a job with Morgan and Company, an oyster firm headquartered in both San Francisco and Oysterville. His job aboard their oyster schooner the Louisa Morrison took him north to Shoalwater (now Willapa) Bay in 1874 and, once there, he never left.

At first, he lived in Uppertown, just south of Oysterville, according to Dobby “very near where I live today.” Later, Heinrich moved to Bruceport where he established his own native oyster business. Hearing of a young Danish nursemaid named Laurine Lauritzen who was working for the Cape Disappointment Lightkeeper’s family, he decided to go courting. By the third visit, however, Wiegardt wearied of the 30-mile trek by boat and “shanks mare” to see his sweetheart, so he proposed and they were married almost immediately.

According to Dobby, not only did Grandpa Heinrich begin the family’s interest in the oysters of Shoalwater Bay, but it was he who began the family duck-hunting tradition. When the ducks flew over the bay in front of his Bruceport home, he would open the kitchen window and shoot enough for dinner. Many of his descendants are avid duck hunters, especially Dobby, who has taught most of his five children as well as five of his 13 grandchildren to hunt. “I’m hopeful their shooting will improve,” he laughs.

The pioneer Wiegardt family eventually moved across the bay to Ocean Park where their descendants would carry on the oyster business, eventually expanding their interest in local bivalves to include both razor and steamer clams. They would build a cannery in Ocean Park and their concerns would extend to hatcheries and to the 21st century environmental challenges of oyster farming.

Although some of Wiegardt descendants have scattered far from their Pacific County roots, there are family members who have maintained their close connections, right down to some of the early Wiegardt homes. Watercolor artist Eric Wiegardt maintains his studio and gallery in the house that Heinrich and Laurine built when they arrived in Ocean Park and, down the street a block or two, Eric’s sister Teresa Goodwin and her husband Rick live in the house where Gustave Wiegardt, Sr. lived and where Dobby was born and grew up with his two sisters, Susie and Ann.

By the time Grandpa Heinrich had arrived in Shoalwater Bay and settled himself in Uppertown, young Charles Nelson was already at work building his little three-room house at the south end of Oysterville. His property was right at the ‘S’ curve at the south end of Territory Road — the curve that would later be known as “Nelson’s Corner.”

Like Wiegardt, Nelson had come from “the old country.” Charles was born in Kalmer, Sweden, in 1846 — two years after Heinrich — and when he was 14 he, too, shipped before the mast, sailing around the world many times before settling in the United States. When he was 21, he became an American citizen and, eventually, arrived in San Francisco where he was employed by John Crellin, an oysterman with interests in both the city by the Golden Gate and in Oysterville on Shoalwater Bay.

While in Crellin’s employ, young Nelson made several trips north to Shoalwater Country on the oyster schooner Sailor Boy. He liked what he saw and vowed to return. In 1870, when he was granted a transfer to Oysterville, he and another young man named Meinert Wachsmuth*, sailed north on the Louisa Morrison and settled in Oysterville. Years later, Nelson’s oldest son, Charlie, wrote about his father’s arrival on the Peninsula for the Summer 1966 issue of the Sou’wester, quarterly publication of the Pacific County Historical Society:

“The Louisa Morrison found its allotted spot in the eight-acre area called the ‘sink,’ where a ship could find a bed among the shoals without crushing the oysters at low tide. The tide being high, the young man rowed ashore in a Staten Island skiff and walked from the dock into town. Passing the school house, Dad saw the raven-haired, sparkling-eyed Anna Parker standing by a window. He thought to himself that someday she would be his bride. His infectious smile caused the girl to return the friendly sailor’s greeting.”

Anna had come from Illinois by wagon train in 1866 with her widowed father and three younger siblings. She was 12 years old. She and Nelson were married July 20, 1873 and were parted only by Charles Sr.’s death on June 1, 1918. “My English mother who came by land and my Swedish father who arrived by sea had a good life in Oysterville where they raised seven children…,” their son Charlie said.

Now, years later, as he reminisced about those pioneer days, Dobby said again, “It stands to reason that Grandpa Heinrich and the elder Charles Nelson knew one another. Their children and grandchildren certainly did.”

For decades, second generation Charles “Charlie” Nelson, Jr. (the eldest son) and second-generation Gustave “Dobby” Wiegardt, Sr. (the youngest son) lived across the street from one another in Nahcotta. Some of the second generation “Nelson Boys” worked in the oysters with their father, as did the Wiegardt boys with their dad.

Third generation and fourth generation Nelsons and Wiegardts went to local schools and sometimes left the Peninsula to work or to attend university. Sometimes, through marriage or other circumstances, names changed. Now, among the Wiegardt family are the surnames Prest, Field, Goodwin, Phipps, Town, Uskoski, and Kuttreus. Surnames of Nelson descendants include Nichols, Mead, Billings, Ramsey, Janus, Scott, Reynolds, Woodley, Petit, Biggs and Shagren. And there may be others. Six generations is a long, long time.

“And now Lila and I have great-grandchildren coming along,” Dobby says. “We have six now, all under five years old. Three of them are the great-great-great-grandchildren of Heinrich and Laurine Lauritzen Wiegardt and, also, of Anna Parker and Charles Nelson, Sr. To think that those four pioneers came to the Peninsula when Washington was still a territory! And now, those pioneer families have united, almost 150 years later! It’s hard to imagine!”

*In another interesting twist, Meinert Wachsmuth, who had first arrived in Shoalwater Bay a decade and a half before Wiegardt, was also born in Schleswig. The Wiegardt and Wachsmuth stories, up to their arrival in Oysterville, are amazingly similar. See Sailing Aboard the Vivian in Shoalwater Bay in the Aug. 8, 2018 issue of this newspaper.