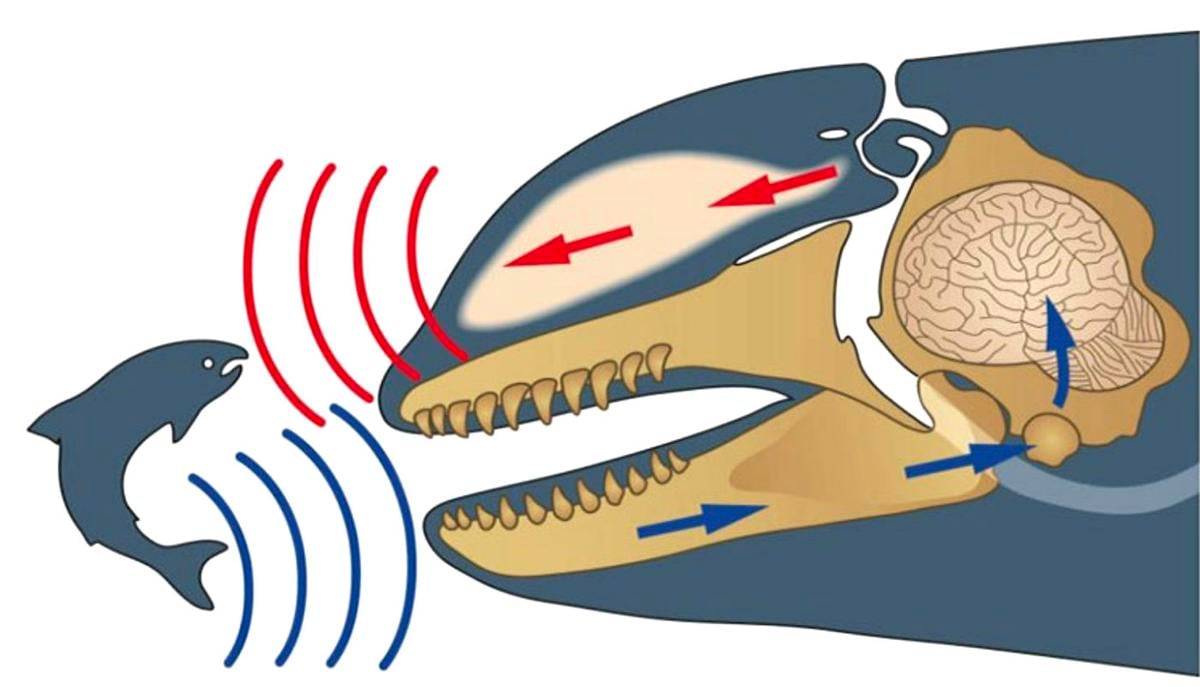 This illustration of echolocation by Uko Gorter shows a whale sending out sound waves to locate prey, and the sound echoes that bounces back to the whale from a salmon. 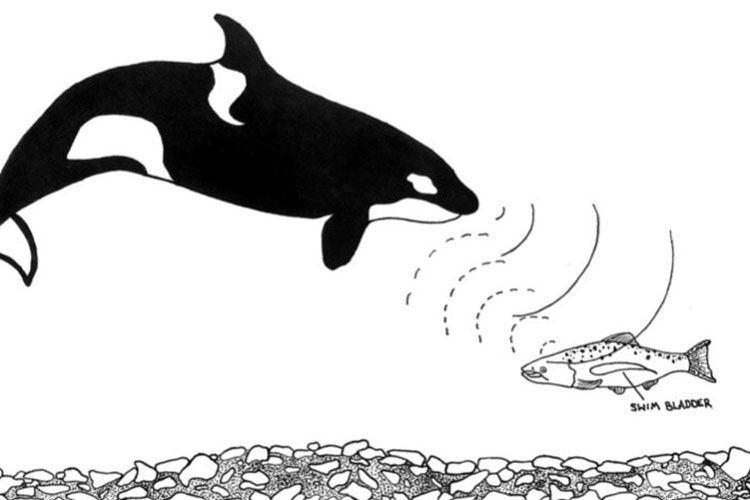 Southern Resident killer whales use echolocation clicks to recognize the size and orientation of a Chinook’s swim bladder.

This illustration of echolocation by Uko Gorter shows a whale sending out sound waves to locate prey, and the sound echoes that bounces back to the whale from a salmon.

Southern Resident killer whales use echolocation clicks to recognize the size and orientation of a Chinook’s swim bladder.

Indeed, it’s critical to their hunting abilities. It is so precise that the whales can tell one species of fish from another. Their hunting is also easily interrupted by noise. Along with disturbance from boat traffic, noise is considered one of the key threats to these endangered whales.

The Southern Residents are the southernmost population of fish-eating orca in the eastern Pacific. They prefer Chinook salmon to all other prey. They seek out the largest, oldest individuals. Recent studies even suggest that killer whale predation of larger Chinook salmon is contributing to a decrease in the average size of Chinook salmon throughout the Pacific Northwest.

How does a Southern Resident killer whale find and hunt down these larger, older Chinook salmon while ranging across more than 15,000 square miles, including the ocean off Pacific County and the mouth of the Columbia River? This vast expanse is occupied by hundreds of other fish species, including five other species of salmon whose populations are often far more abundant than Chinook salmon.

Southern Resident killer whales may need to eat 10 or more Chinook salmon each day depending on the size of the whale and the salmon. They have been observed eating mostly Chinook salmon. The whales hunt with echolocation, which is the use of sound waves and echoes to locate objects.

When hunting, a killer whale sends out a series of clicks, called a click train, that spread through the water like a flashlight beam of sound. If the sound waves hit an object, echoes bounce back to the whale. Echolocation allows killer whales to detect fish at distances of up to 500 feet, much farther than they could see in the dark water.

“The foraging behavior of the Southern Residents indicates that the whales are using click trains to detect individual fish,” says Holt. “The vast majority of the sound energy in a click train is above what humans can hear.”

Humans can hear the lower frequencies that the whales use for click trains. However, we cannot hear the returning echoes.

How does an orca tell a Chinook salmon from a coho?

A swim bladder is an organ filled with air that a fish uses to maintain its depth in the water column. The pocket of gas in the swim bladder strongly reflects the whales’ sound waves, making it the perfect target for echolocation.

“The whales use echolocation clicks to recognize the size and orientation of a Chinook’s swim bladder,” says Holt. Researchers feel confident that the whales can identify the acoustic signature of the swim bladders of different species of salmon. One piece of evidence, Holt explains, is a laboratory experiment that Whitlow Au and peers at the University of Washington conducted over a decade ago.

The researchers placed similarly sized Chinook, coho, and sockeye salmon in a tank, anesthetizing the fish to keep them still. They then simulated killer whale echolocation clicks, aiming the sound at the fish, and measured the returning echoes. The echo structures of each species were different and probably recognizable by foraging killer whales.

Echolocation helps the whales hunt in other ways.

“Are the whales looking for fish or for good fish habitat when they hunt?” asks Holt. “Experienced fishermen will tell you that Chinook salmon like to hide in rocky crevices.” So the whales may use echolocation to search out those habitats, bouncing their sound waves off the underwater topography.

Southern Residents eat other species of fish besides their preferred Chinook salmon. The whales’ winter diet can include steelhead, lingcod, and halibut. Halibut is a bottom-dweller with no swim bladder. So we know that the whales can detect a fish without needing to detect a swim bladder, explains Holt.

This is the time of year when boats multiply on the waters of Washington as more people get outdoors for the summer. It is also the time when …

Nurse on battle with Covid-19: Wouldn't wish it on own enemy