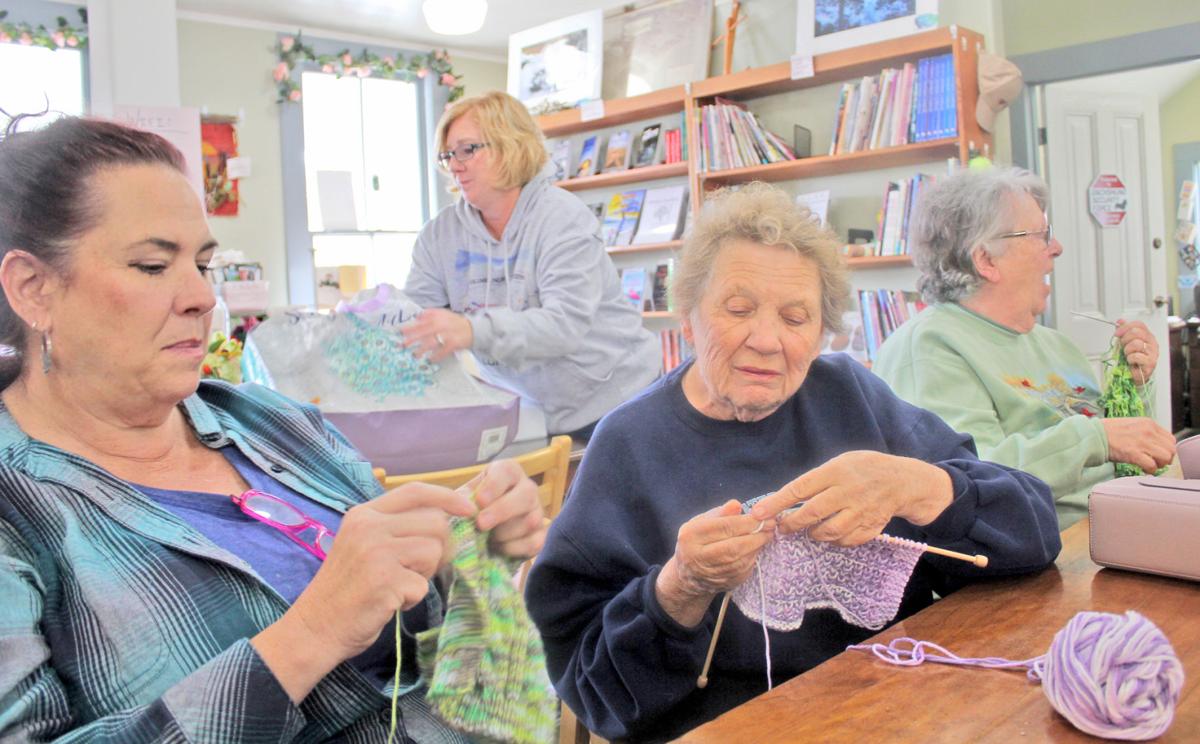 Camaraderie is evident as, left to right, Jill Anderson, Eleanor Will and Sheri Hendrix create varied fiber artwork around a table at the Tapestry Rose yarn shop inside Adelaide’s coffee shop in Ocean Park while sharing stories. Working behind them is Ragan Myers from the city of Long Beach getting organized for the Columbia Pacific Fiber Arts Festival which will take place Nov. 9-10 at the Chautauqua Lodge. 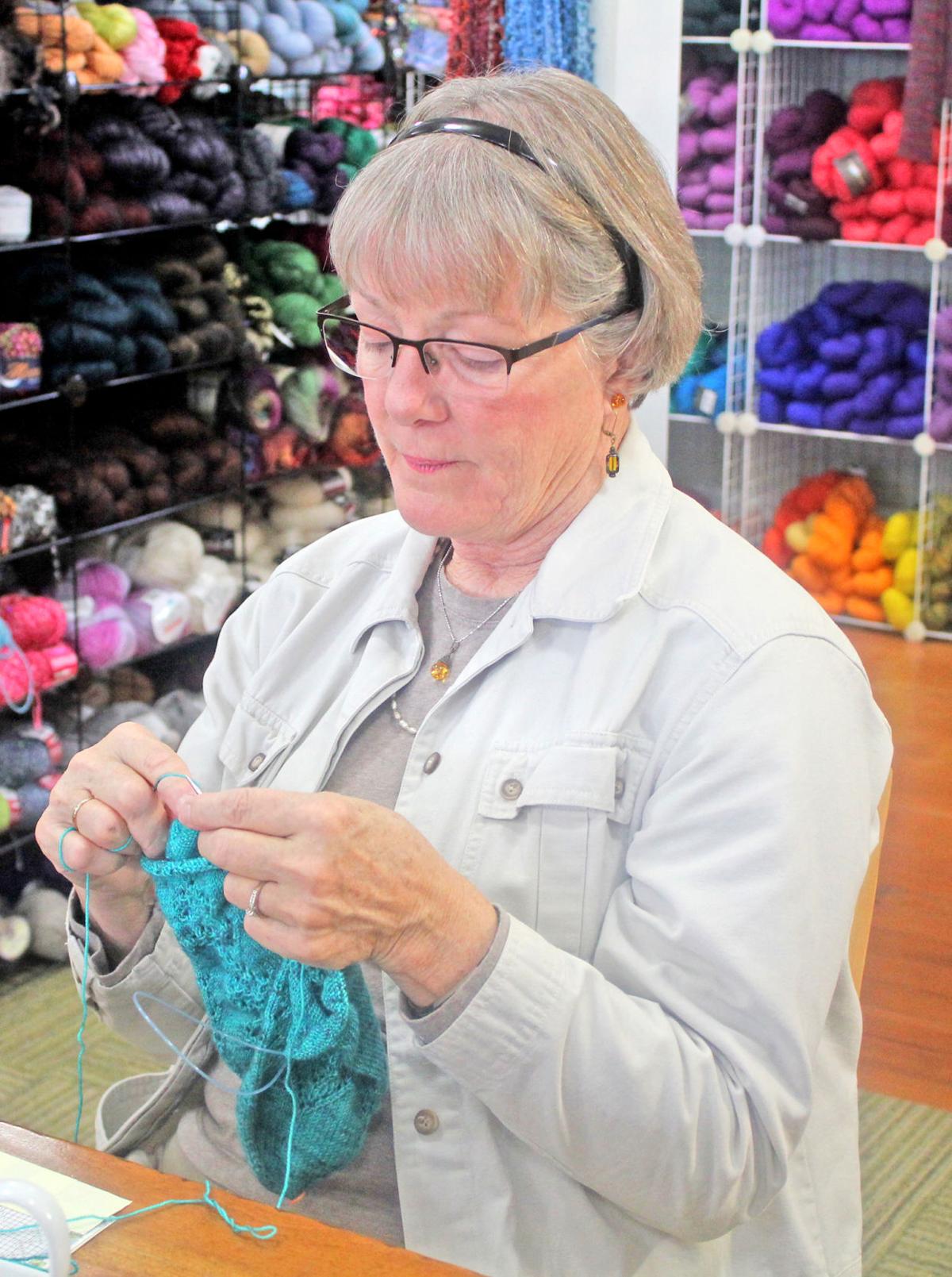 Evie Rissman works on a pair of socks as the knitting circle gathers in Ocean Park to enjoy some creative togetherness and share ideas. 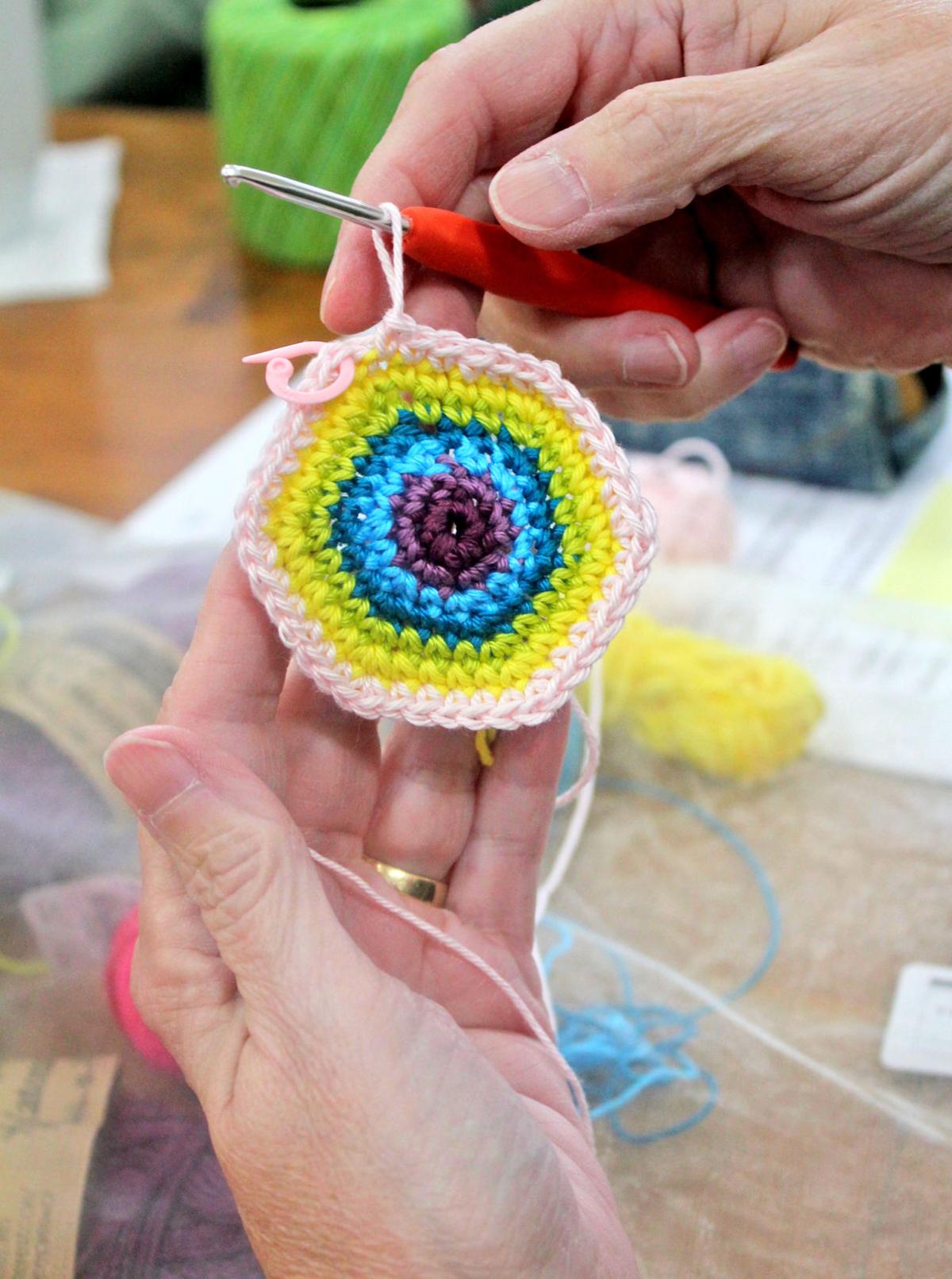 Diane Seifert of Long Beach shows her progress on a crocheted pin cushion that will be attached to her wrist. She will teach a mini workshop at the upcoming festival. 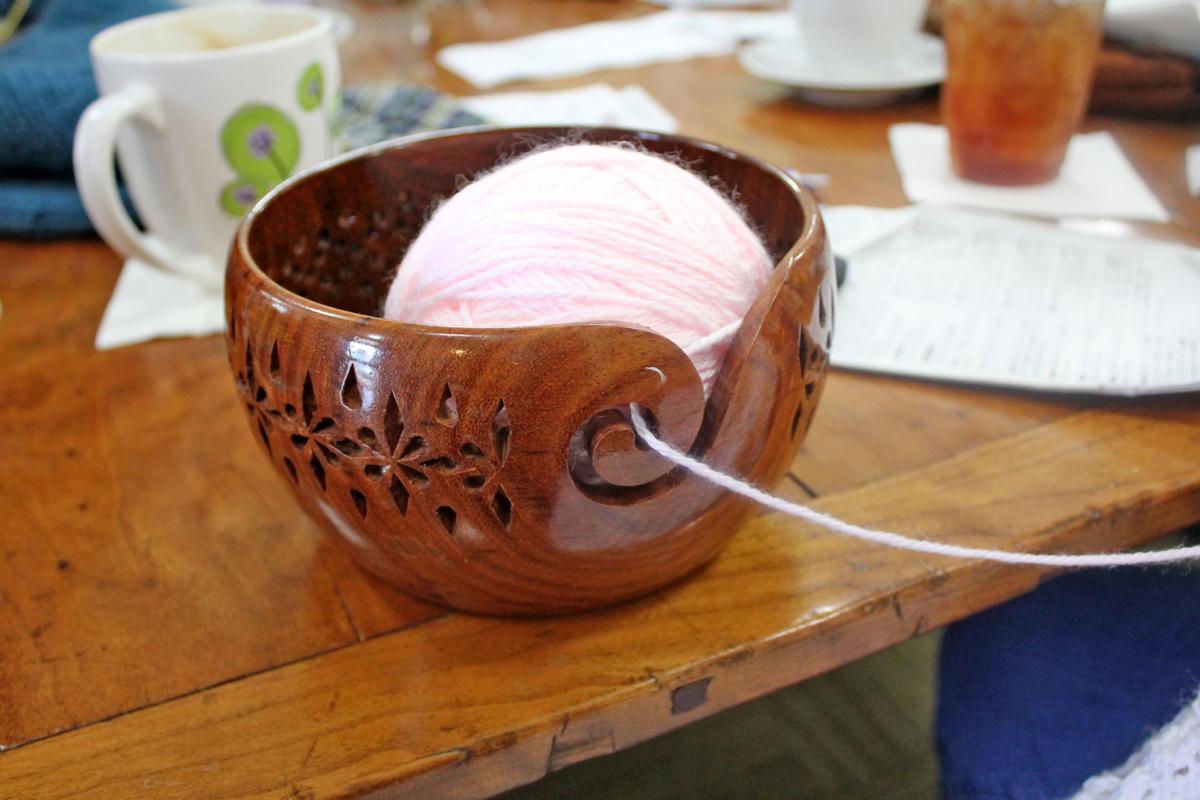 Creative ideas do not have to be complex. Brenda Taylor uses a bowl with a curled opening to hold her wool and guide it to her needles.

Sign up for mini workshops when the event begins

They are a tight-knit group

They sit around and spin yarns.

And they keep each other in stitches.

They have heard every knitting-sewing-weaving pun you can imagine.

But modesty means many balk at being considered “artists.”

The Long Beach Peninsula is loaded with people who knit, crochet, sew, quilt, spin and weave. Now a new event has been fashioned to celebrate their talents.

The first Columbia Pacific Fiber Festival will take place Nov. 9-10 at the Chautauqua Lodge in Long Beach. It will feature classes, mini workshops, displays and 25 vendors. Organizers hope it will become an annual event.

The idea started when Colleen Smith, who owns Adelaide’s coffee shop and the Tapestry Rose yarn shop in Ocean Park, was considering ideas to lure visitors to the region after the busy summer.

“It sort of began many years ago, well, maybe five years ago,” she said, “How can we bring people here during ‘off-shoulder’ times, when we don’t have festivals or clams or oysters?”

‘It’s a real treat to create. It feels very satisfying and purposeful.’

Ragan Myers, events coordinator for the city of Long Beach, was having similar thoughts, because that’s an important part of her job description.

“When there’s snow in the mountains, people are not coming to the beach,” she said. Storm watching lures some winter visitors, but learning about widespread interest in fiber arts encouraged her.

She traveled down the Oregon Coast to observe the success of the Newport Spin-In. Throngs of women, including many mother-daughter combinations — and men — demonstrated skills at a crowded venue.

“There’s more of a niche for this than I ever thought possible,” she said. “There’s a huge interest here among our population and huge interest outside.”

The event website has been taking registrations for the classes for some weeks. Paula Ward, president of Seattle Knitters Guild is among experts traveling to participate. Seifert will teach mosaic crochet. Other classes will feature beginning rigid needle weaving by Sylvia Emard and Gestalt knitting theory and knitting plaid will be taught by Kitty Bryan. Audrey Knippa will teach knitting two at a time (socks, gloves) and knitting in the round.

Originally the idea was for visitors to have the option of spending Monday freelancing on the Peninsula before heading home. But a third day of activity has been added with a Storm of Words and Song at the Port of Peninsula in Nahcotta. The event runs 10 a.m. to 2 p.m. Oct 11. It features live music and poetry, plus the opportunity to spin yarn under the tent.

When a group of Peninsula fiber enthusiasts gathered in the yarn shop on a recent afternoon to chat, sip tea and work, their projects range from crocheted pin cushions to knitted hats, socks and scarves. Jill Anderson was even crafting a sweater for a 6-pound Chihuahua called “Dash.”

Several learned their craft from an older relative.

From her late aunt, Shelly McSweyn inherited hundreds of knitted square and octagon shapes planned for a table covering that her late grandmother had begun.

“I wound up with them,” she said. “I have the pattern and I must be the one to finish it.”

McSweyn was thoughtful about why she carries on this family legacy.

“It’s a real treat to create. It feels very satisfying and purposeful,” she said. “And in the end you have a lovely product, which is sometimes the goal, but not always. Sometimes the process is actually the best part and the end product is almost a bonus.”

They rarely use the word “perfectionist,” but one story features a knitter who unraveled 86 rows because she discovered one error.

Evie Rissman smiled as a pair of green socks takes shape on her needles. “My grandmother used to do over my difficulties when I went to bed,” she said. “I thought I was a great knitter!”