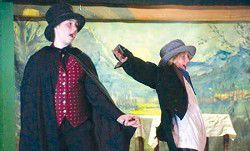 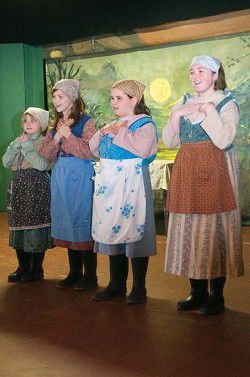 Ever see the movie, "Bugsy Malone," starring Scott Baio and Jodie Foster? The plot follows the rise of gangster Malone and the battle for power between fellow hoods "Fat Sam" and "Dandy Dan." It's a gangster movie, but all the actors are children. Instead of real bullets, they shoot "splurge guns" that cover their victims in cream. Children play all the parts, but the film treats their characters' actions and motivations as those of adults.

Naturally, "Junior Shanghaied" pulls its punches as far as questionable material is concerned. The original script is a bit bawdy, based on the rough and tumble days of Astoria at the turn of the century. In this second version of the popular play (which spoofs the history and folklore of Astoria), the feathered ladies of the evening are now Harvey Girls (which references the terrific MGM musical, "The Harvey Girls," starring Judy Garland.) Miss Vivian's saloon and Miss Macie's boarding house are gone. The rivalry is between their two restaurants in the new play. All allusions to alcohol (sugar's the only addiction), shady ladies and anything else that might be objectionable have been removed. Says the company's production manager, Judy Niland, "We don't need those things to be entertaining."

"Junior Shanghaied" isn't just about entertainment, though. It teaches the craft of theater. Former CCC instructor Del Corbett co-authored the original "Shanghaied" script in the 1980s and remains integrally involved with the ASOC. He and others tried to get educational theater for kids going several times in the past but "nothing stuck," says Niland, adding that "until we had a permanent place (theater), we weren't able to offer any stable programs. Energies went elsewhere." That all changed after the Astor Street Opry House opened last year. Dana Lewis Allen directed the ASOC's initial foray into children's theater last year, laying the groundwork for the 2009 "Shanghaied" in miniature.

The time was right. It didn't hurt that, according to Niland, today's kids are different from those 10 to 15 years ago. She marvels at their focus and on-stage maturity. All their exposure to current media seems to have added a layer of sophistication, which makes it easier to do a professional, long-running production using them. According to Niland, these kids can take direction, wear costumes (and take care of them), do their chores backstage and learn their lines and blocking like little pros. "They don't seem to want to attend classes in theater, though," laughs Judy. "They just want to be on stage." In the main, the youngsters in the cast come mostly from Astoria, Seaside and across the river. There's even a few from Cannon Beach. There are more girls than boys, apparently.

A lot is expected of these kids, and the commitment is huge. Still, this is amateur theater and anyone can participate if they can memorize lines and follow the rules. It's also a teaching process - a powerful tool for reaching children, tapping into their natural instinct to explore by pretending. Small wonder children are often acting "naturals" - remember Oscar wins by Patty Duke (for "The Miracle Worker"), Tatum O'Neal (for "Paper Moon") and Haley Joe Osment (for "The Sixth Sense")?

The rewards for participating kids are many. They learn teamwork, how to take criticism, how to interact and to relax and have fun with people of all ages. They bond with a group of people over the five or six months it takes to put on a show, feeling safer and more secure in their midst. They also learn about how to start something, make it happen and then close it down. "It's important to know how to end things," says Niland.

Some of the key people behind the scenes in this production include director/instructor ChrisLynn Taylor, one of two Miss Vivians in the adult "Shanghaied;" choreographer Carleta Allen Cady, who worked up new, less provocative dance moves for the young cast; and Terrie McDonald, who worked 10-hour days, seven days a week for a while to make costumes for both versions of the play!

Expect a longer season with more plays next year, though. They're just getting started and, based on the ASOC's track record, we can expect great things ahead.

50 of the best posthumous albums