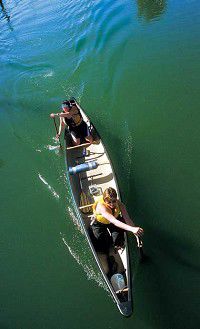 Whether it was the single or two-person variety, paddle boat racers turned out Saturday for the second annual Baker Bay Kayak Race.<I><BR>DAMIAN MULINIX photo</I>

Whether it was the single or two-person variety, paddle boat racers turned out Saturday for the second annual Baker Bay Kayak Race.<I><BR>DAMIAN MULINIX photo</I>

ILWACO - It's hard to believe I've lived here on the Peninsula for a year, but I must have, because once again, it was time for the Baker Bay Kayak and Canoe Race.

For the second year in a row, water-sports enthusiasts gathered at the Port of Ilwaco for a day of fun. As an added bonus, the weekend also included the Chowder Challenge on Sunday, a 10K or 5K walk/run along the beach that ended in a feast of clam chowder from various local restaurants in down town Long Beach.

As Barb Greenebaum, while enjoying chowder, put it, "If you didn't have a good time (this weekend), you never would."

This year the weather was perfect. Blue sky, calm water, not too hot, not too cold, unlike last year which started out windy and rainy, the lightning almost causing the race to be delayed.

I must admit, I had looked forward to the kayak race with both anticipation and trepidation. For me, the race was something of a milestone. It had been just over a year since I pulled up stakes, uprooted myself, and moved to a place I had never been, leaving friends and family far away for a new adventure.

Like the race, the year presented both challenges and rewards. Paddling along the bay, I was presented with an opportunity to contemplate not only the breathtaking scenery but also the previous year.

I am not a competitive soul. I like to stop, smell the roses, enjoy the view. Which is fortunate for my self-esteem, because I did set a record in the race. I finished last.

But, just as with the past year, though I might not have been the swiftest or the best, I had a wonderful time.

Actually, coming in last has some advantages. I felt like the Queen Mary being escorted into the harbor by the wonderful people of the South Pacific County Technical Rescue team, who worked as a safety crew again this year. They made me feel secure and protected as I paddled along, just as I have received support and encouragement from new friends in the community.

I was cheered as I passed the finish line, not one of the crowd. It's nice to stand out, so to speak.

Tired but satisfied, I pulled up to the dock, greeted by my friend Dan, who once again acted as my support crew. He helped carry my kayak, which was fortunate because I could hardly lift myself, never mind a kayak.

I arrived, a little over two hours after leaving, just in time for the awards and fish dinner. Everyone applauded as each award was presented by Bruce Peterson, one of the organizers of the event. Then the crowd wandered away.

But the weekend wasn't over yet.

The next morning people gathered at the port once again. This time, not for a boat race, but for a walk or run.

Like the kayak race, participants were rewarded with food at the end of the course. Always, at least for me, a good motivator.

Some hardy souls took part in both the kayak race and the run. Not me, I decided I'd had enough of a workout. But others said they enjoyed the additional race, nicely rounding out the weekend.

"It's a nice course, challenging," said Jana Kreilich. "We came for a girls' weekend."

Which epitomize the real point of the weekend.

Just as in life, the weekend was about participating, spending time with friends, having fun, not about winning or losing.

"We had a great time," said Tina Ellis, who participated in the Chowder Run.

And I agree with Wallis Gorden, who said "I think we'll have to do this again next year."