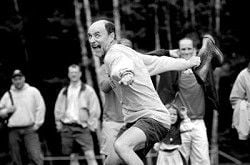 <I>File photos by DAMIAN?MULINIX/Chinook Observer</I><BR>Peter Marsh competed in one of the unique activities of the Finn Festival, the boot toss contest, at the festival in 2006. 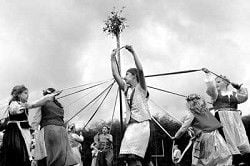 Finnish dancers, spinning a beautiful Maypole, are a sight to see at this weekend's festival.

<I>File photos by DAMIAN?MULINIX/Chinook Observer</I><BR>Peter Marsh competed in one of the unique activities of the Finn Festival, the boot toss contest, at the festival in 2006.

Finnish dancers, spinning a beautiful Maypole, are a sight to see at this weekend's festival.

NASELLE - The Naselle Finnish American Folk Festival (FAFF) will be held July 25, 26, and 27 at the Naselle schools complex located at the junction of SR 4 and SR-401. The theme of this 14th biennial festival is "Knee Deep in Finns."

The festival began in 1982 as a way to celebrate the heritage, customs and traditions of the numerous Finnish immigrants who moved to this area starting in the late 1800s. This family-oriented festival is for young and old alike. Attendees can have fun while learning about Finnish and Finnish-American history, culture, and current life in Finland. This celebration stresses the beliefs of "Love and Unity" as depicted in the charter logo of the Naselle FAFF.

The FAFF golf tournament will be held Thursday, July 24, at the Peninsula Golf Course just north of Long Beach. The four-person scramble format starts at 1 p.m. The entry fee of $40 covers lunch at the clubhouse where prizes will be awarded. Entries will be limited to 60. Contact Mike at 360-484-3602 or by e-mail at: mswanson_98638@hotmail.com. Entry forms can also be obtained via the Web site listed below.

Two walks are options for those who like the out of doors. Alan Rammer of the Washington Department of Fish and Wildlife will conduct a beach tour titled "Fun Facts about Razor Clams and Other Coastal Critters of the Washington Coast" beginning at 10:30 a.m. from the Bolstad beach approach in Long Beach on Friday, July 25. This walk is free and is for the whole family, but youngsters should be at least in the second grade. Handouts and special treats that are available nowhere else will be given out at the end of this hour-long event. This walk is limited to 40 people, so please register ahead of time with Anita at 360-484-3376 or by e-mail: phil@naselle.net.

"Cedars, Native Plants and Birds" will be led by naturalists Ann Musche and Alan Richards through an old growth cedar grove off Teal Slough west of Naselle. Ann and Alan have been living and learning in this area for 25-plus years. This one-half mile walk on Friday, July 25, beginning at 8 a.m., is for all ages and will last approximately 2.5 hours. Gather at the parking lot of the Lion's Club Park across from the post office on Knappton Road in Naselle. The cost is $5 per person, $15 per family. To register, contact Ann and Alan at 360-484-7119 or e-mail: mrm@willapabay.org.

The Tori (marketplace), lectures and exhibits all open at 10 a.m. on Friday. The Finnish movie, "Mother of Mine" will be shown then. The local historic displays will depict logging, fishing, farming and the early lifestyle of the Finnish-American community. There will be an art and flower room, a photography exhibit, comprehensive genealogic charts, a museum, and displays of arts and crafts. An exhibit of Finnish military memorabilia will enrich presentations on the Finnish Civil War and the role Finland played during WWII. A restored gillnet boat will also be present to emphasize the importance of commercial fishing to this area. Special activities for children will take place that morning and on Saturday. Performances on Friday will begin at 12:15 p.m. The featured performers from Finland for this festival are a group of four teenage females called Kardemimmit who play kanteles in a "lively manner." The last lectures of the day will start at 3 p.m.. and end at 4:30 p.m. The Tori and exhibits will close at 6 p.m., but the entertainment will continue throughout the evening.

Saturday starts with a 3.1 mile/5k Paavo Nurmi Run/Walk on the Naselle High School track. To ensure a race T-shirt, please pre-register by July 15. If registering race day morning, do so before 7:45 a.m. For information and entry forms, contact Jennifer at 360-484-7146, ext. 103, or e-mail: jjohnson@bankofastoria.com. The forms are also available on the Web site. A biscuits and gravy, oatmeal, and fruit breakfast will be available on the school campus beginning at 7 a.m.

The day is filled with a program of folk music, singing, dancing, lectures, food and craft demonstrations, wife carry and boot toss contests, films, genealogy and kantele workshops, plus a continuation of those exhibits already mentioned. The Tori will be open from 10 a.m. to 6 p.m. Food vendors will sell authentic Finnish delights in the courtyard such as juusto, hernessuppa, reiska and makkara. Those who prefer standard American fare will also be accommodated. The Comet Booster Club will again fix a major meal in the afternoon.

A special highlight on Saturday at 3:30 p.m., at the Assembly of God Church in Naselle is a repeat performance of the Kantele Mass which had its world premiere performance at FFUSA '06 held in Naselle and Astoria. Tradition dictates a community dance will be held in the Commons that evening featuring Toby Hanson and the Smilin' Scandinavians.

Sunday begins with a 10 a.m., ecumenical church service and closing ceremony on the NHS Rueben Penttila Field followed by coffee and pulla (biscuit) in the school commons. A "Remembrance and Hope Ceremony" will be held at 1 p.m., at Peaceful Hill Cemetery in Naselle. The Tori, food vendors and displays are not open on this day.

One of the best parts of the festival is that admission is free! The nonprofit Finnish American Folk Festival will gladly accept any donations which will be used to further the goals of the FAFF.

The Cultural Programming Series of the FAFF kicks off with the the Finnish movie "Mother of Mine" at 10 a.m., Friday, July 25, in the Commons of the Naselle schools located at the junction of SR 4 and SR 401.

"Mother of Mine," (Äideistä Parhain), winner of three Jussi (Finland's Oscars) awards for best actress (Maria Lundqvist), best cinematography, and best set design, is the featured film for the 2008 FAFF. The film was also Finland's submission for the 2005 Best Foreign Film Oscar.

Directed by Klaus Härö, it is the emotionally wrenching story of a 9-year- old Finnish boy, Eero, who must adjust to life in Sweden during the Continuation War (1941-1945) as one of the sotalapset (children displaced by war). All alone and speaking only Finnish, Eero is suddenly forced to deal with a confusing and intensely painful situation when his mother sends him away "for his own good" after his soldier father was killed in action. The Swedish family who receives him speaks no Finnish, so he must contend with language difficulties while adjusting to his new siblings and parents. The story follows his attempts to reconcile his love for both his mother in Finland and the woman who becomes a temporary mother in Sweden.

Even though "Mother of Mine" depicts one particular war child's feelings of exclusion and rootlessness, director Härö states, "The themes are strongly relevant to any child who has been separated from his/her parents, to anyone for whom growing up has generally been hard due to the secrets they carry in their heart."

Introducing the film and leading a discussion afterwards will be retired Finnish Consul Norman Westerberg and his wife Benita of Seattle. Norman and his two brothers were among the 70,000 Finnish children sent to Sweden during the Winter War and Continuation War to avoid the conflict. Benita was also sent to Sweden as a teenager in 1944 when she suffered an illness that could not be cured in Finland.

Spoken in Finnish and Swedish, the film has English subtitles. It targets older youth and adults.

Other Friday presentations feature Jim Phipps, retired Grays Harbor Commumity College professor, addressing eathquakes and tsunamis in southwest Washington. He has done much of his research on the Long Beach Peninsula.

Agnes Rands Warren and Maija Huiras will focus on their life experiences. Ms. Rands grew up in a logging camp on the Olympic Peninsula and lived in Anacortes during World War II. Besides depicting life in a logging camp, she interweaves the war emperiences of her extended family in Finland with those of her immediate family in Anacortes in her two creative nonfiction books. Ms. Huiras began her life in Finland's Karelia before the Russians invaded in 1939. She became a homeless refugee in Finland witnessing the hardships of WWII on the Finnish people. Eventually she came to New York iwth only her sisu and her mother's fortitude.

Wayne Beals will share his knowledge of the Finnish Civil War while Irene Martin of Skamokawa will present the history of the Columbia River Packers Association and Bumblebee Seafoods.

The Naselle, Deep River and Grays River valleys' histories will be featured in PowerPoint presentations created by Appelo Archives Center using historic photos of the area.

Saturday, July 26, the Cultural Programming Series starts at 8:30 a.m. with a repeat of the Appelo Archives PowerPoint presentations and Donald Reed of Vancouver discussing how to turn personal life experiences into literature.

Finland's involvement in WWII will be Wayne Beals's topic followed by Christine Perala Gardiner's discussion of Finland's economics since WWII.

Karen Bertroch's presentation will appeal to all nationalties as it focuses on the question of passing on items of sentmental value to friends and family.

History of early settlers in the local areas will be covered by Bryan Penttila and Jason Sievers, both of whom have family members who came to Deep River and Naselle in the late 1800s. In addition, early logging in the area filmed by Paul Wirkkala will be narrated by his brother Ben and Paul's son Greg.

Alan Rammer of the Washington Department of Fish and Wildlife will present natural history of Washington's sea life.

Those writers who want to present their original works are invited to participate in an open mic, "The Spoken Word," emceed by former local resident Gary Anderson.

Exhibits related to the above include Rod Prestegard's restored gilnet boat and Finnish military memorabilia explained by Wayne Beals and Jeffrey Paul. The exhibits are open both Friday and Saturday from 10:00 am to 6:00 pm

The Cultural Programming Series is only one part of the popular Naselle festival Entertainment abouds both Friday and Saturday. On Saturday arts/crafts and food demonstrations happen as well as sporting events such as the Paavo Nurmi Run/Walk, wife carry, boot toss, and Nokia phone toss. Come frolic with the Finns at this FREE festival event!

Best and worst roles of the 'Friends' cast

David Bowie: The life story you may not know