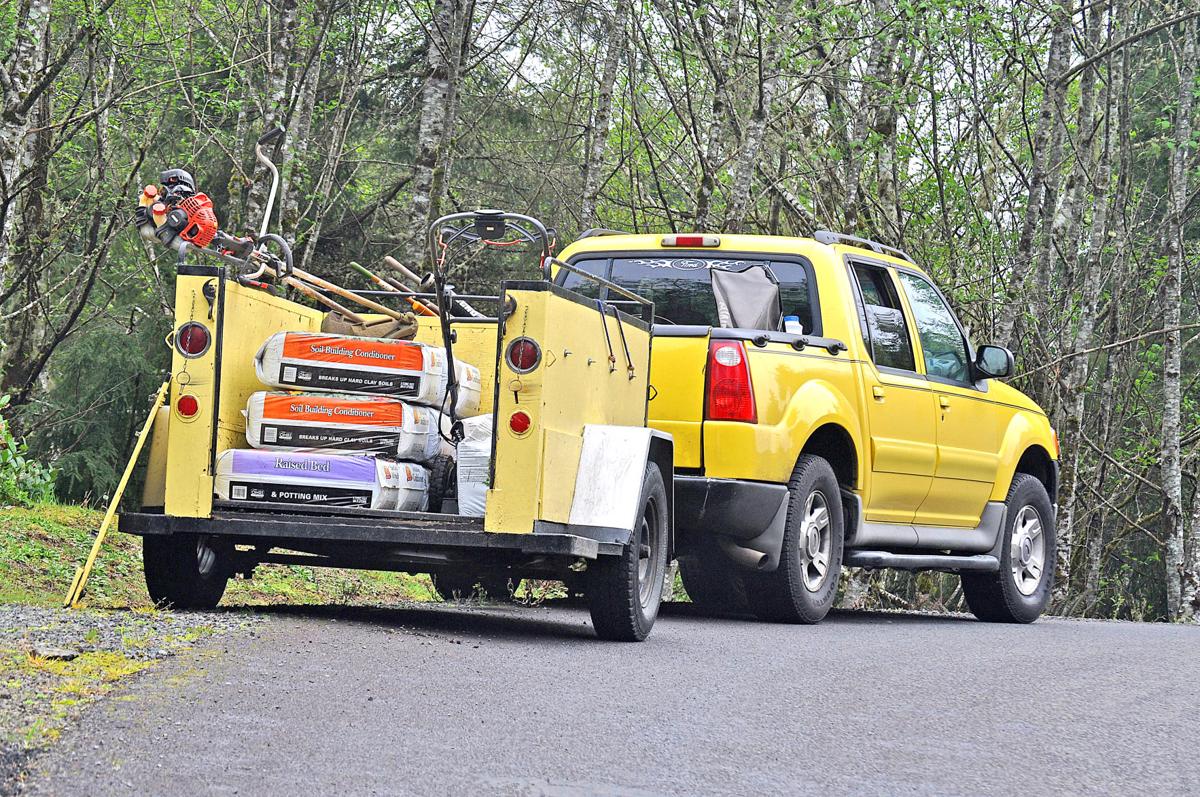 The rig Terran Bruinier drives for her BeeKissed Gardening business is easy to spot as she buzzes around from one Peninsula job to another. 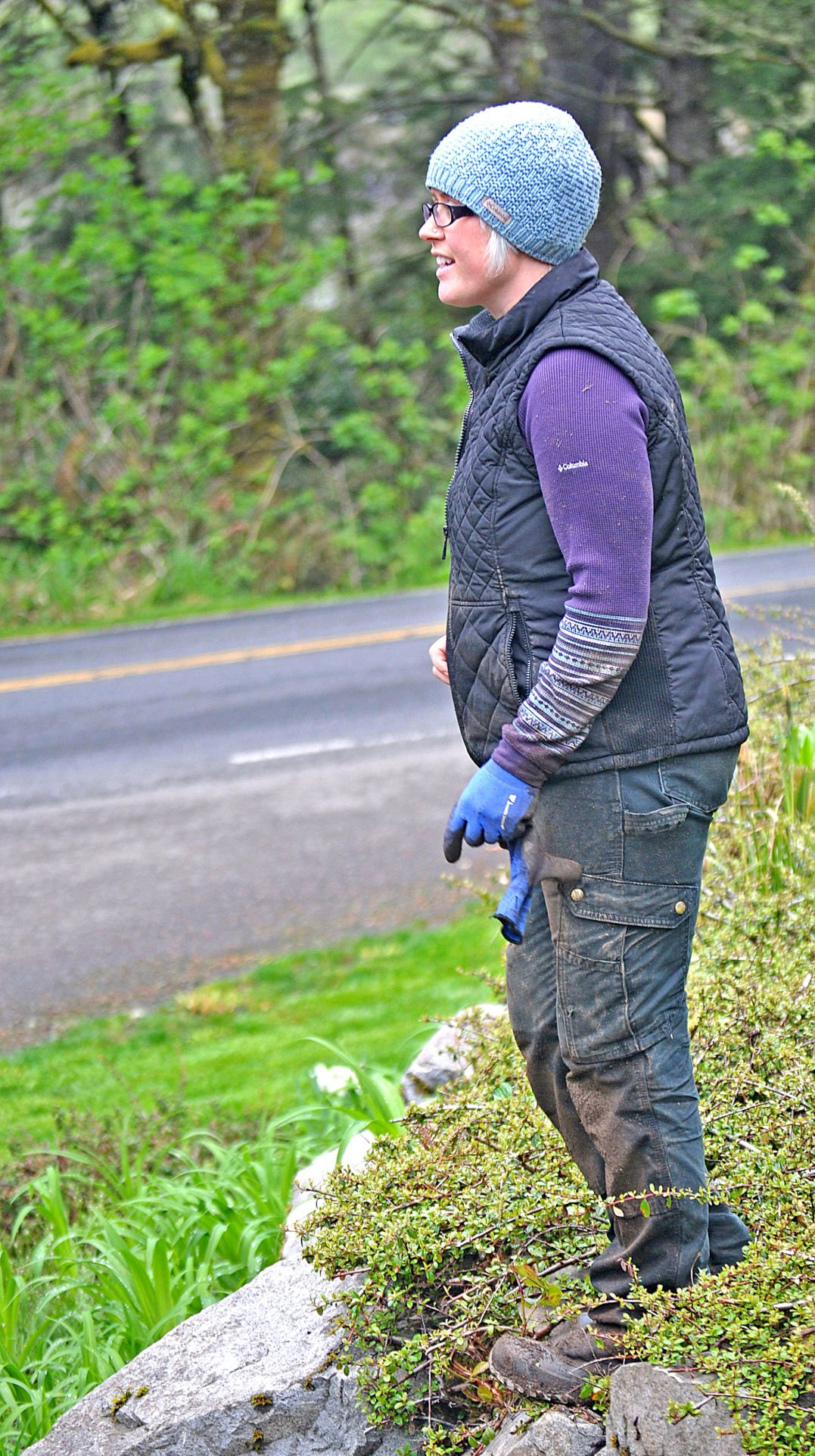 Chilly and wet weather don’t deter Bruinier at all. Here, while working at Ilwaco’s Discovery Heights neighborhood on a damp day, she speaks to a client who just drove down the hill and had some instructions for her, for when she works on his place. 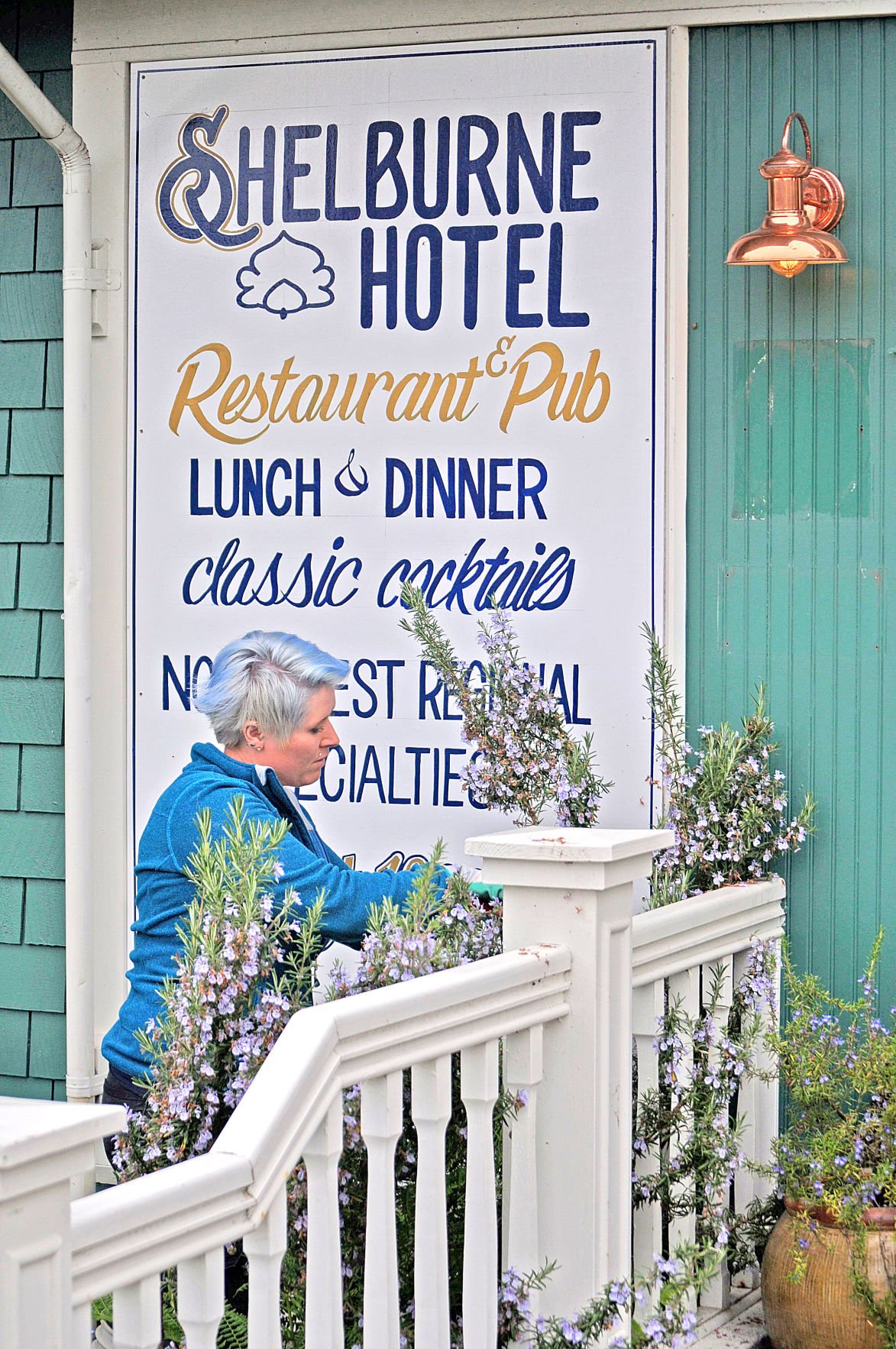 Bruinier recently began gardening duties for the Shelburne in. Here, she cuts back a rosemary plant. 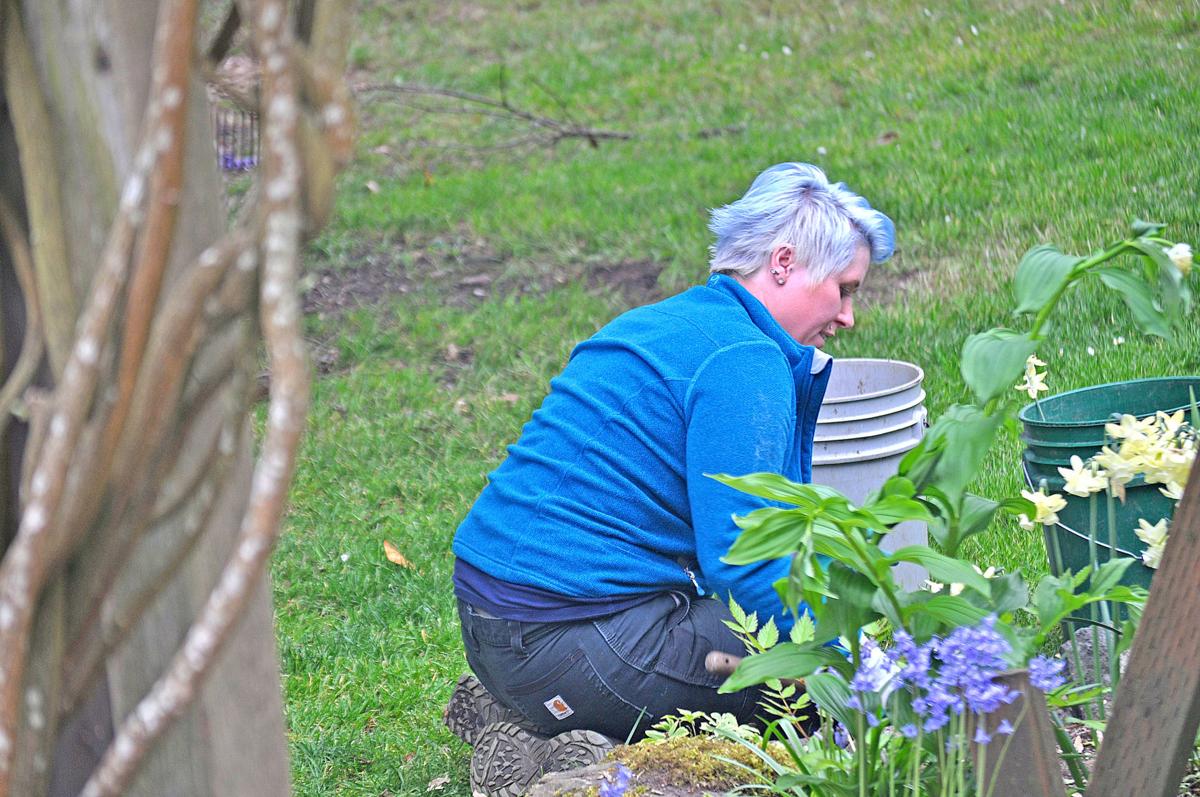 Bruinier, weeding and cleaning up a flower bed at the Shelburne.

Once in a while, Terran Bruinier practices her own version of Take Your Dog to Work Day, times two. Her Siberian Huskies Ragnar and Lagertha, are glad to sit quietly in the yellow truck as long as they can be with their “Mom.” This also gives them time away from the six cats at home.

SEAVIEW — One day last week, gardener Terran Bruinier parked her bright yellow pick up with the matching equipment trailer in tow in front of the Shelburne Inn. She unloaded some equipment and went right to work on the gardens, weeding flower beds and cutting back a tall rosemary plant near the front door.

Quietly waiting in the pick up were Bruinier’s two Siberian huskies, Ragnar and Lagertha, their matched faces sticking out of the partially opened side window as they watched their “Mom” at work.

She sometimes brings the dogs with her as sort of a personal Take Your Dog to Work Day, times two. And since Huskies are not known for barking, they annoy no one.

The dogs must sense how content Bruinier is with her work. No slipping into high heels and sitting in front of an office computer for this lady. Each morning before 8 a.m., she slathers on sunscreen and heads for work in the great outdoors. This is her dream job.

Don’t fence her in

That love for being outside began early. She was raised in Sylmar in Southern California’s San Fernando Valley area. “My dad raised me as an outdoor tomboy. And we had a little garden.” And throughout her life, “There’s always been camping and hiking. So, being outside has always been natural to me.”

Bruinier has actually been gardening for others since she was about 15 years old. “I used to do lawns and landscaping,” she said. She still did this on the side after a divorce, when she went to work across the bridge at the Fred Meyer store. There, she explained, “I was the food assistant manager. Basically, I oversaw dry goods, dairy, frozen, natural foods, meat, seafood,” and the list goes on. Plus, sometimes she even piloted a forklift and unloaded truck freight. She’s not afraid of hard work.

When she began that job after her 2010 divorce, she said, “I was the first female manager in a long time. I was in a boy’s club. It was kind of fun.” And a victory of sorts, because not only was she accepted, but, “After that, they started bringing a lot more women on board.”

It was a good job and she didn’t have to sit behind a desk all day. But it wasn’t outside and she longed for that freedom and fresh air. And, she had gained a lot of knowledge that she wanted to put to use, after spending years researching garden and landscape topics and also taking classes in biology, botany and the Master Gardeners program at Clatsop Community College. She had graduated in 2009.

So to get back outside, she established her current business, BeeKissed Gardening about three years ago. The bright yellow truck she purchased was a natural choice. It’s easy to spot when she’s buzzing all over the peninsula to work for her many clients. They range from individuals to businesses. She gave examples recently, which included a sprawling property once owned by area artist Martha Lee. Bruinier had worked there for 15 years and now does gardening for the new owner, a doctor.

She added, “I do Rita Nicely’s garden. And Lisa Smith’s on the bay. She has a beautiful property.”

The Shelburne in Seaview and Discovery Heights in Ilwaco are among her business clients.

Recently, during a cold wet weather pattern this spring, Bruinier often pulled on a knit cap and headed to Discovery Heights to work on cleaning up the landscaped approach area. Sometimes, it was hard for her to stay dry.

“I don’t mind a little rain,” but she draws the line when it hails. As for the cold, “I get pretty warm under my work gear.” She can always peel off layers when the sun comes out, even down to a hat that covers her face.

And the sun comes out

That day last week at the Shelburne, the sun was shining and the temperature mild and comfortable. That’s why she knew her dogs would be all right on the front seat of the yellow truck, especially with the windows down. When she walked up to check on them, they stuck their noses in her face and wagged their tails. It was an ideal day for them to come to work. Of course, when the weather gets too warm, they’ll have to stay home in Ocean Park with the rest of the family, comprised of six cats who have developed climbing skills all over the house to avoid getting down on the floor with the dogs. All the cats are strays that Bruinier has adopted, except for one she got from a relative who was moving. Possum is a food thief. Misty is the fat cat. The others, Ghost, Sable, Peekapoo and Gabby, also have their individual traits. But overall, they like it when the dogs go to work with their owner. Looking at those two husky faces sticking out the truck window in front of the Shelburne, it’s hard to tell them apart. Even their Mom has trouble with that. “From a distance, there’s not a lot of differences.”

The dogs are full brother and sister from two different litters. Ragnar, the male, will be two years old on June 6. He is named, Bruinier said, after a character from the show “The Vikings”: “It’s Scandinavian and my family is Norwegian, so we thought this was perfect.”

Lagertha, the female is just 10 months old. She’s not as heavy coated as Ragnar, so that’s one difference. And once they’re observed fairly close up, it’s easy to see that Ragnar has green eyes and his sister’s are blue.

Right now, Bruinier is working about 8 a.m. to 8 p.m. seven days a week. “As soon as I get a few projects out of the way, I’m hoping to start taking Saturdays off,” she said.

She has some help. “I’m actually mentoring a guy who works for Parks and Recreation in Astoria. I’m trying to get him to take over the lawn side of my business. He does beautiful work and he knows so much about gardening now.”

And speaking of mentoring, Bruinier said that one of her own most significant mentors has been Skyler Walker, who had been the “master of the Shelburne garden, retired [from maintaining that particular garden] and turned that over to me. I actually worked with her for several years. She has the most amazing client index, so I wanted to get as much knowledge from her as possible. She’s an amazing person. I was extremely flattered when she recommended me to the Shelburne.”

Young man in her life

Bruinier is the proud mother of a son, 13-year-old Grayden. “I’m lucky that he is such a responsible, good kid,” she said, beaming. “He really does well in school. He’ll be in eighth grade in the fall. We’re already planning for him to do that Running Start program and finish his last two years of high school at Clatsop.”

Grayden seems to understand that his mother is delightfully quirky with a highly developed sense of humor. After all, how many other kids his age have a human skeleton and a horse skeleton at home on their sun porch? And how many other moms of middle school age kids used to drive around with the human skeleton in the passenger’s seat of her car? Someday, his mom wants to put those skeletons out in their yard and grow moss on them.

He is obviously a patient young dude.