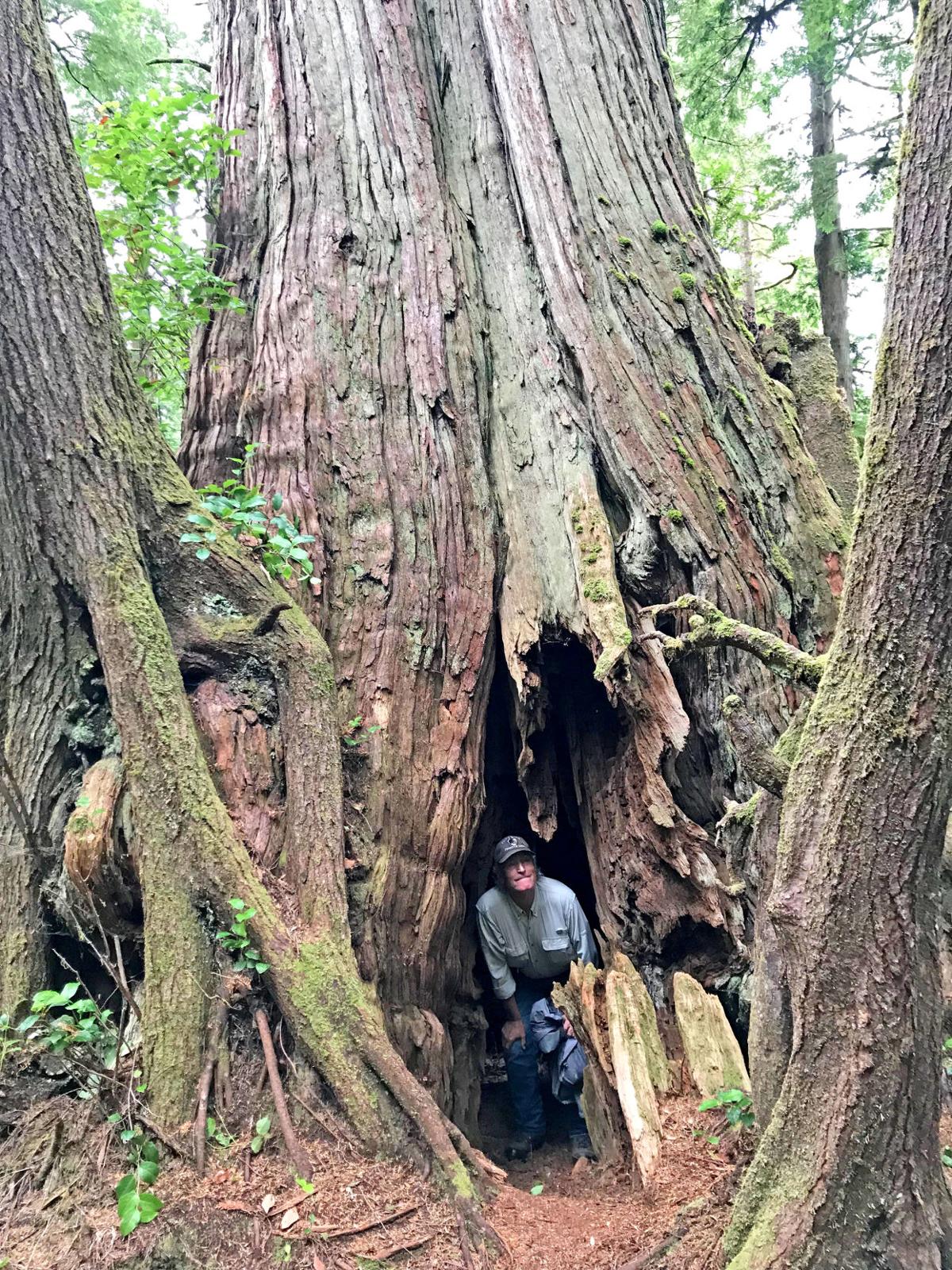 Bob Bell of Naselle croached inside one of the ancient cedars of Long Island during a visit in the summer of 2018. 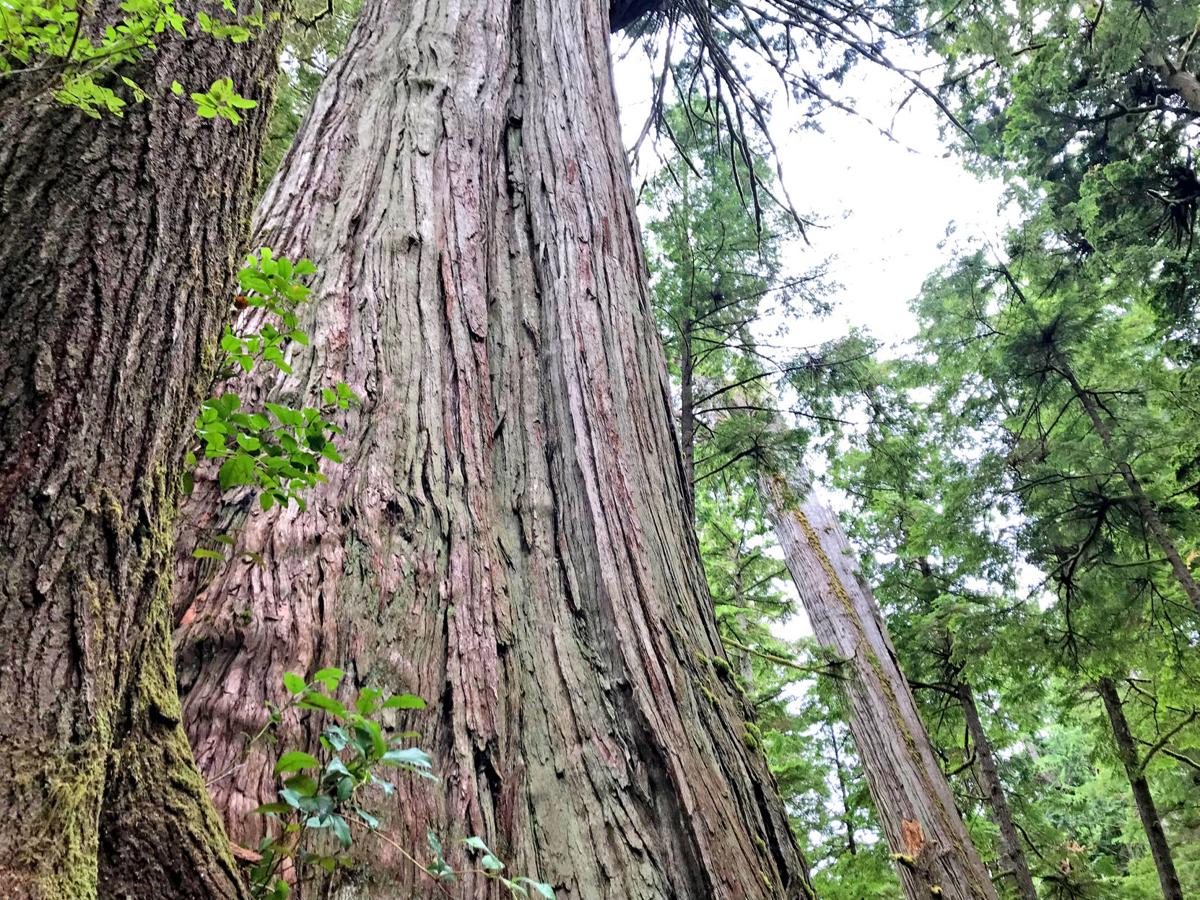 It’s difficult to capture the scale of the Long Island red cedars in a photo, but these are enormous.

Bob Bell of Naselle croached inside one of the ancient cedars of Long Island during a visit in the summer of 2018.

It’s difficult to capture the scale of the Long Island red cedars in a photo, but these are enormous.

WILLAPA BAY — The term “living fossil” is one that mixes a sense of being out of place with one of awe and mystery. The coelacanth, a fish that lived alongside dinosaurs, was believed extinct until a living one was found in 1938. Another such living fossil is right around the corner, on Long Island.

That six-mile long island nestled in Willapa Bay is like stepping into the past. The 5,500-acre island includes 274 acres covered in cedar trees that were around when Constantinople became Istanbul in 1453. And unlike other forests, which are constantly in a state of flux due to development, fire or storms, this primeval grove has been untouched for thousands of years.

According to a 1985 article written in Washington Magazine by current Daily News editor Andre Stepankowsky, the first trees of the Long Island grove began sprouting about 4,000 years ago. While those first trees have not survived to this day, the average tree is still between 150 and 160 feet in height, with the oldest individual trees being roughly 1,000 years old. Old rotting cedars on the ground may have been sprouting when Julius Caesar was a child.

When studying forests, most of the discussion is about old-growth forests. The definition of this term varies depending on region, but in the Pacific Northwest, a forest reaches old-growth status when the majority of trees are more than 250 years old.

Old-growth forests already constitute a small fraction of all woodland in the area, but the Long Island grove is old enough to earn itself an entirely different distinction. These trees make up a “climax forest,” a steady-state system of self-reproducing trees so rare that before this grove was found, some researchers believed there were none still in existence. Usually, fire or windstorms interrupt the evolution of a forest to its final “climax” condition. But not at Long Island.

An aid in research

This well-preserved forest has allowed scientists to step into a snapshot of the ecosystem that once dominated coastal regions. Researchers from groups like the U.S. Geological Survey and the University of Washington have used their rings to gain insight to the history of the area. A 1997 project, headed by David Yamaguchi and Brian Atwater, dated cedar stumps along the coast to 1699, which led them to believe a massive disaster occurred before spring of 1700, the same year that a massive tsunami hit Japan. In their report, researchers concluded, largely through comparative tree dating, that 1700 was the year of the last major earthquake in the region.

But the grove’s survival even through disaster is no mere stroke of luck; the trees were perfectly placed to avoid what felled similar groves around the region.

Long Island is tucked into Willapa Bay, with the Long Beach Peninsula shielding it from the worst winds off the Pacific, while the frequent fog and rain keep fire risk to a minimum. Additionally, its position on an island makes it very unlikely that wildfires started elsewhere will spread to the grove.

The location also spared the grove from heavy logging. While Weyerhaeuser Co. acquired the lands for logging from Northern Pacific Railroad in 1900, the cedar grove survived because its location inland on the south portion of Long Island was far more distant to the places where logs were rafted into Willapa Bay and, from there, to shore.

Weyerhaeuser began to log the grove in the early 1970s, but its moves were met with protests. The company ultimately agreed to a deal with the U.S. Department of Fish and Wildlife Service to protect the ancient cedars.

The pact originally required the government to pay Weyerhaeuser each year, and the cost was being met with growing resistance by the mid-1980s. Southwest Washington Congressman Don Bonker stepped in to broker a lasting deal in which the federal government purchased Weyerhaeuser’s timber rights and preserved the grove in 1986.

Today, the Long Island cedar grove is open to the public, but getting there is a challenge. There are no bridges or ferries to Long Island. Anyone who wants to visit needs to find their own transportation. Visitors to Long Island who arrive from the southeast are met with signs for the Don Bonker Cedar Grove Trail.

Bonker was also instrumental in the creation of the Mount St. Helens Volcanic National Volcanic Monument, the Columbia River National Scenic Area and Grays Harbor National Wildlife Refuge, as well as many state parks and refuges he expanded.

In a 2005 interview with The Daily Astorian, he called the purchase of the cedar grove “special... a rare moment” among the many accomplishments in his legacy. It was preserving these special places, he said, that always meant the most to him.