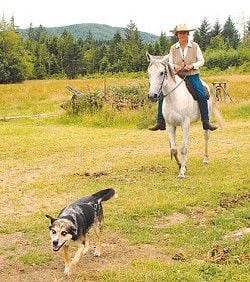 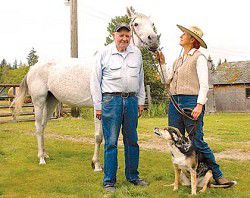 <I>KEVIN HEIMBIGNER photo</I><BR>Bob Ziesmerand wife May (not pictured) are hostingBernice Ende, her horse Honor, and her dog Claire while Ende rests at the Ziesmers' on Upper Naselle Roadduring a 2,500-mile ride from New Mexico to Montana.

<I>KEVIN HEIMBIGNER photo</I><BR>Bob Ziesmerand wife May (not pictured) are hostingBernice Ende, her horse Honor, and her dog Claire while Ende rests at the Ziesmers' on Upper Naselle Roadduring a 2,500-mile ride from New Mexico to Montana.

NASELLE - Bernice Ende began her ride in Las Vegas, Nev., she rode through Death Valley, went up the Pacific Coast, and is enjoying a rest at the home of Bob and May Ziesmer before heading home to Trego, Mont., later this month.

Ende is a "long rider" because "I just have to be." When she arrives back in Trego she will have completed rides totaling over 7,000 miles the last three years. In 2005 she was a ballet instructor in Montana who also gave horse riding lessons. "I was tending to two Tennessee trotters one day when the thought came to me that I could ride them to my sister's place," Ende explains. Even in this day and age people sometimes enjoy riding to their relatives, but Ende's sister lives 2,000 miles away in Albuquerque, N.M. "Since I couldn't get the thought out of my mind, I stopped teaching ballet and went for it."

It took her about nine months to prepare for the ride. "I followed the western slope of the Rockies from Trego to Albuquerque." The next year Ende rode to Minnesota, near where she grew up and then down to New Mexico - a jaunt of 2,600 miles. And this year her ride will be a mere 2,500 miles when she, her eight-year-old thoroughbred mare named Honor, and feisty dog Claire get rested up enough to move on from the Ziesmer's place on Upper Naselle Road. The long rides maybe roughest on Claire, but Ende makes leather booties for her feet.

"Growing up on a farm in Minnesota gave me the wherewithal to be a long rider. I do not have the concept of fear. I have a sense of 'can-do-ness' and I'm very independent," Ende says. Ziesmer, with his wry sense of humor, says, "I think she's nuts." The two met several years ago when both worked for Weyerhaeuser and have shared their love of horses ever since.

Ende describes her rides as being "all by myself, no pack horse, never with more than three days of food, I am totally dependent upon the generosity of the people I meet along the way." She says, "I ride the grub line. Sometimes I stop up to three times a day and ask for water. Sometimes I get a meal, a place to stay and a hot shower, sometimes not. I've been welcomed by mayors and I've also met some really off-the-wall people."

She has followed Highway 101 up the coast, ridden on logging roads, trails, followed power lines and fence lines, gone just about everywhere except by freeways. "I got lost one time north of Round Up, Mont., in oil field country. I saw a building a couple miles ahead, but it was too steep to take the horse, so I crawled under a fence and climbed up the hill. There were two men working at desks so I announced that their wives had sent me to check on them." Later it stormed with lightening and torrential rain. "The one fellow took his shiny new red pickup and helped make sure I made it through the mud and he and his wife put me up in Musselshell for two nights."

Ende says, "I have stayed in million-dollar mansions and in shacks, in abandoned houses, corrals, back yards, ditches, city parks and airports. Sometimes I work for food, maybe helping the elderly. Other times people are just very giving." Ende makes it a policy when she rides into a new town to contact the local sheriff. "They are very helpful in giving directions and with making contacts for me."

Ende has spoken about her ride to school groups, 4-H clubs, at retirement homes and prisons, or in Safeway parking lots. "I will share about my rides with anyone who will listen. This is how I make my living. I pass the hat and thank anyone who gives me money," she explains. "I've had hundreds, no make that thousands of people who have said they wished they could do what I am doing."

Ende is quick to point out, "These rides are not all fun and romantic. They are hard work. You get tired, thirsty and hungry. There are rattlesnakes, an occasional cougar, you come upon a car parked out in the middle of nowhere, there can be danger." She keeps a dairy, saying she has written thousands of pages, and Ende takes hundreds of photos of her rides. "Next year I may use a digital camera and get a laptop computer. I do not carry a cell phone and I don't even have electricity at my cabin in Trego."

Ziesmer is currently trying to help Ende learn to shoe her own horse. "Honor was a 'throw-away' and very close to the cannery when I got her. She was a bit rambunctious, but after 500 miles on the trail she settled down. She needs the rest and I have a lot to learn and Bob can teach me. I also want to pick up some veterinary skills this winter and I'm always learning better communication skills for meeting people on the trail."

Ende says, "A long rider is all about freedom of time and space. There are only a few of us and I believe we are a legacy to our country. We couldn't do what we do without the generosity and kindness of small-town America."

This year it took Ende "about a week" to get ready for her current nine-month ride. She has about another 800 miles to go before Honor, Claire and Ende hit the home turf by her Montana cabin. "I'll rest for maybe four months and then about January or February I'll head down to the desert and start a 3,000-mile ride. I can handle the cold in the desert, but not the hot," she admits.

As for future years, Ende says, "I want to keep long riding for as long as I can." She will depart from Naselle July 22 with her customary "Happy trails!" salute and with the trust that her trail will be just that.

For more information on Bernice Ende, go to (www.endeofthetrail.com).